Ok, hiking is great, but do we really have to get out of bed at around three in the morning? Pfff..., it required some determination to actually get out of bed. Minutes later, we were packing our tent while it was still dark, carefully not to make too much noise. At four in the morning, we walked towards the bus stop near the tourist information center. We had expected to see some other people there, but nobody. Nobody else. Luckily, the bus turned up right on time and we had a nice chat with the female driver. Just as the bus was about to leave, another couple turned up. Ha, more crazy people! 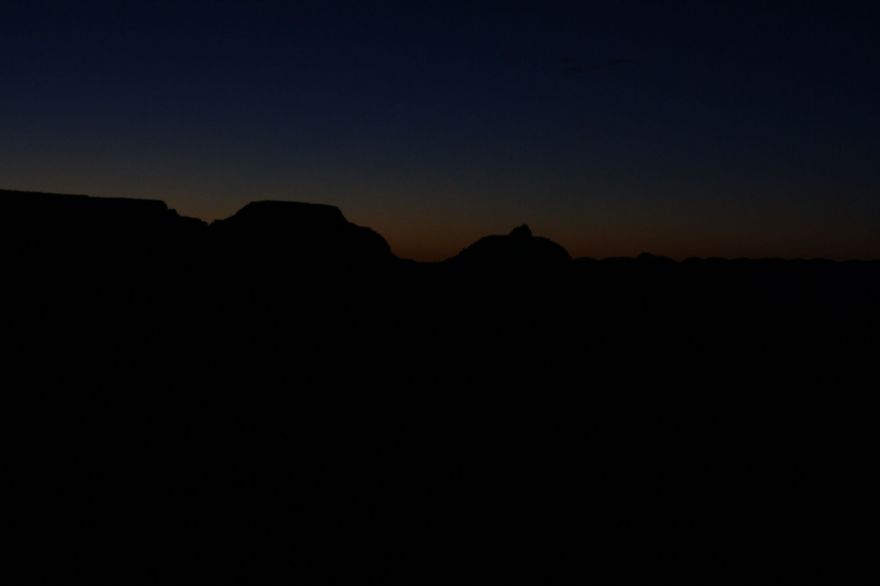 The bus took about fifteen minutes. We were surprised to actually see more people there. About ten people were preparing themselves to hike down. We put our headlight on, as it was still dark, and started the hike. A strange experience, walking in pitch darkness while knowing there is a deep drop on one side of the trail. After about half-an-hour, darkness made place for the first sun rays. Instantly, the temperature started to rise. In just 45 minutes, we walked to Cedar Point, where we had breakfast. 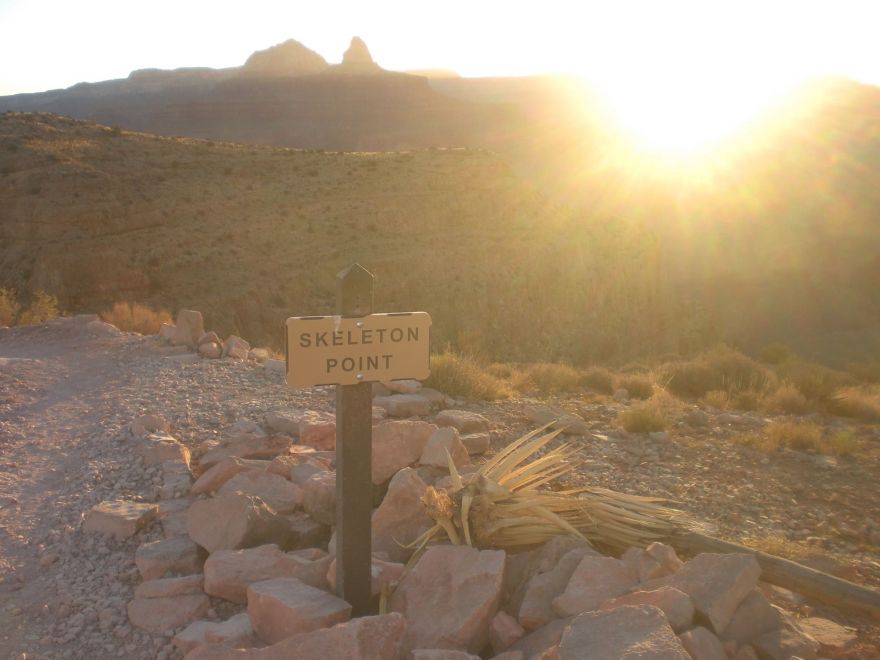 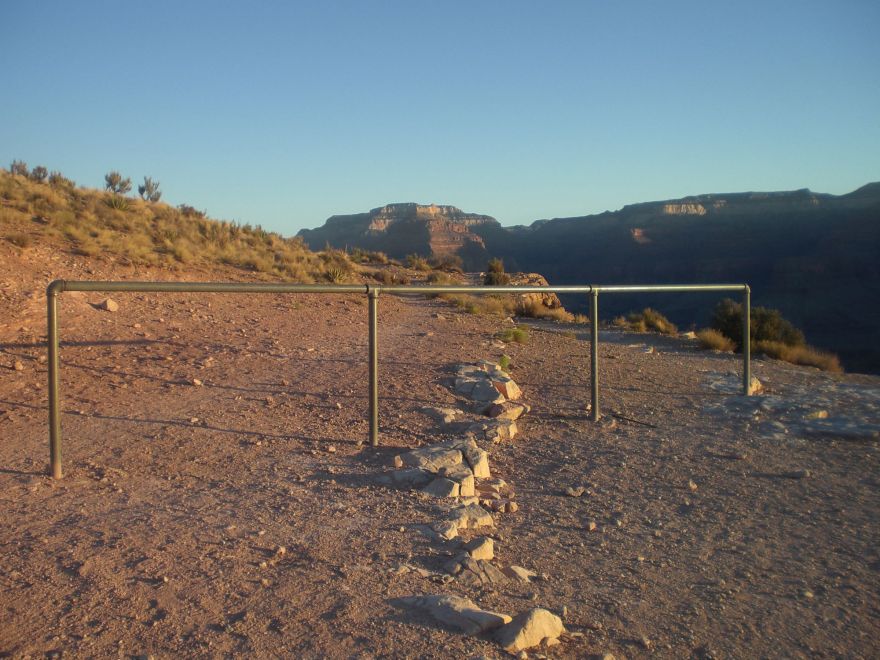 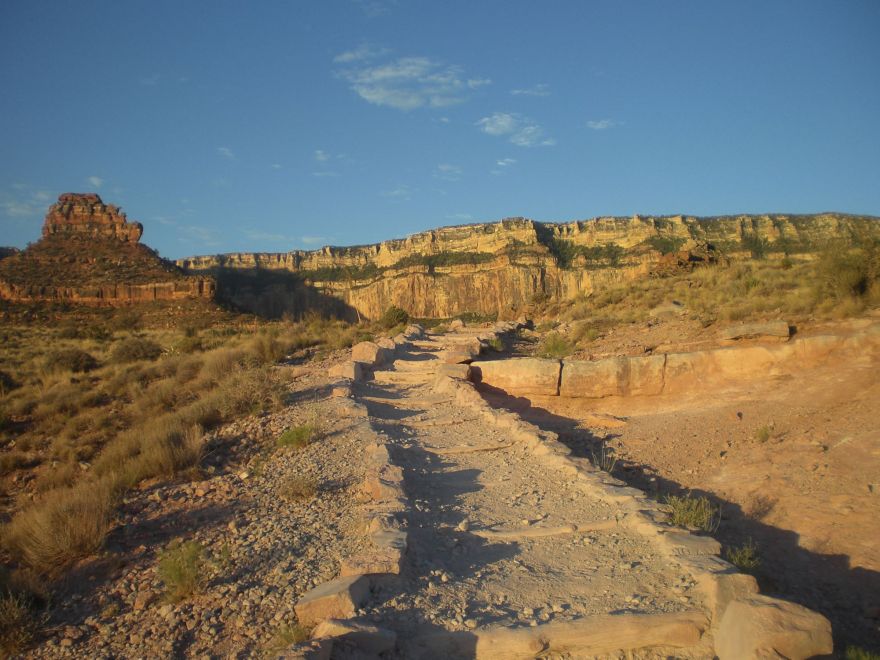 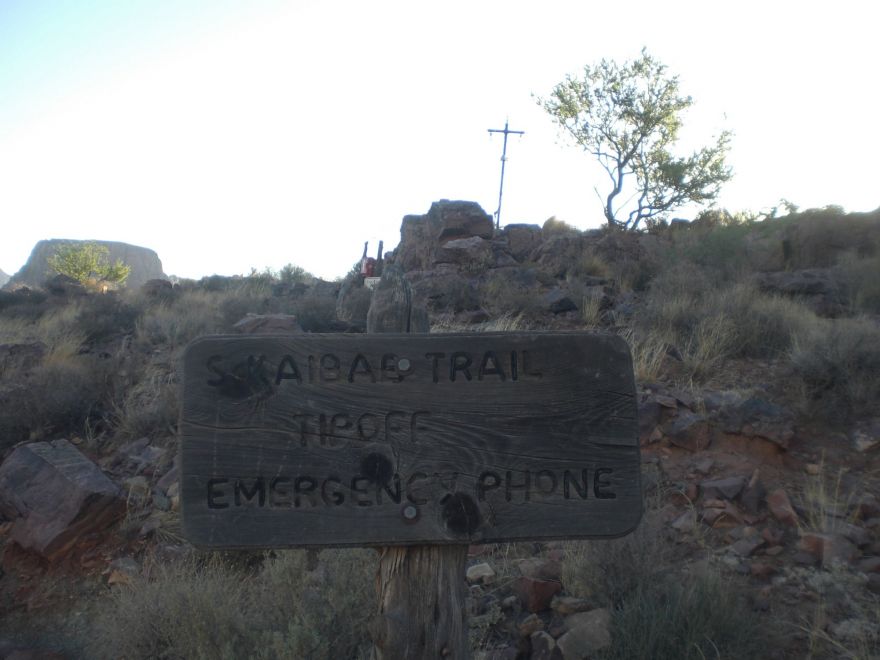 Seeing the sun rise slowly above the horizon was a great experience. But we didn't have a lot of time to rest, as we had a long hike ahead. We packed our headlights, and started walking again. Because darkness had completely gone, it was more easy to see the path, so we were actually able to make some speed. We crossed the Tonto Plateau, where the path levels out, in no time. At Skeleton Point, where day-hikers are advised to turn back, the path descended via a steep path towards the Colorado River. 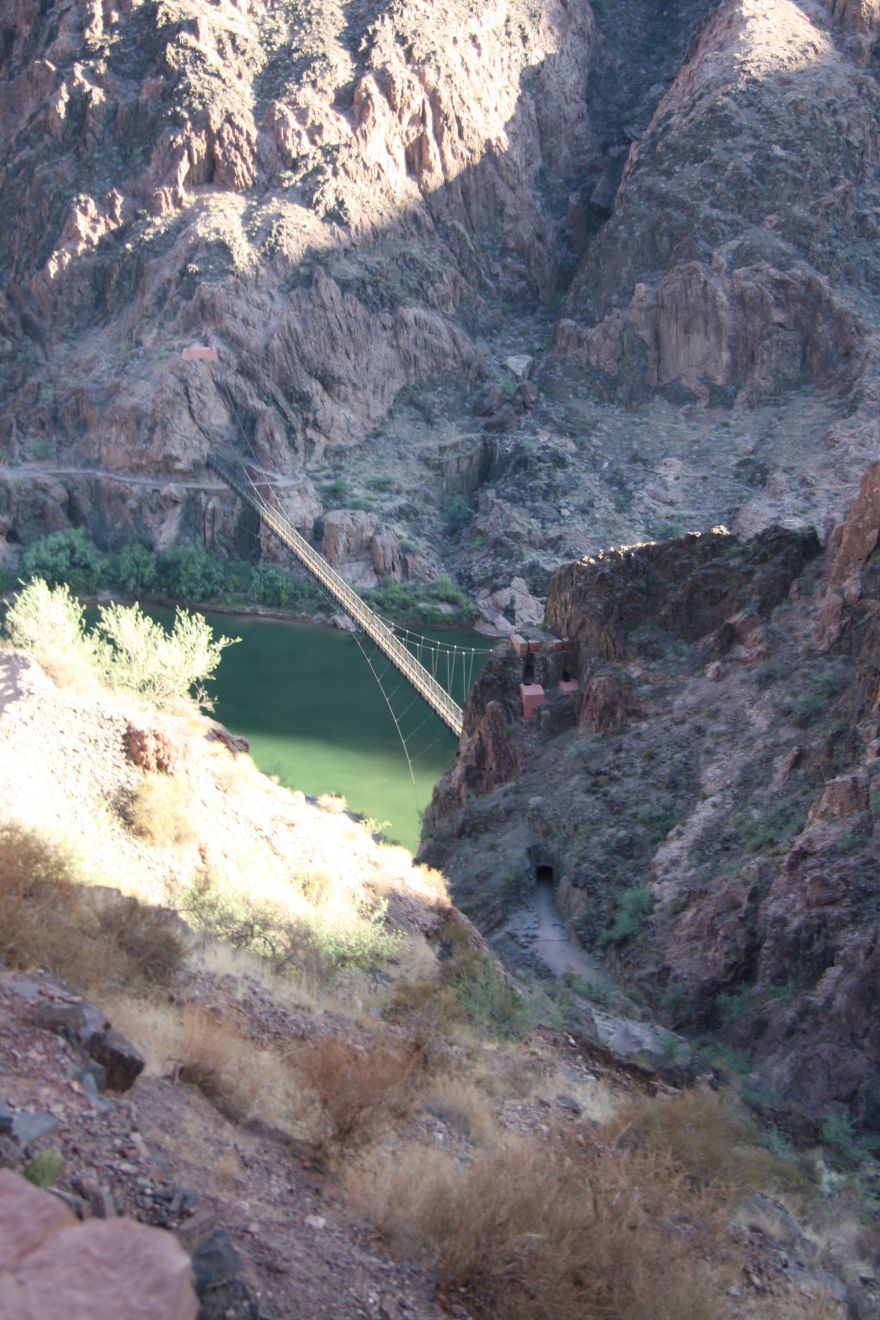 Even though we were able to see the river, it still took quite some time to actually walk down to the river. From Skeleton Point, it took us about an hour. 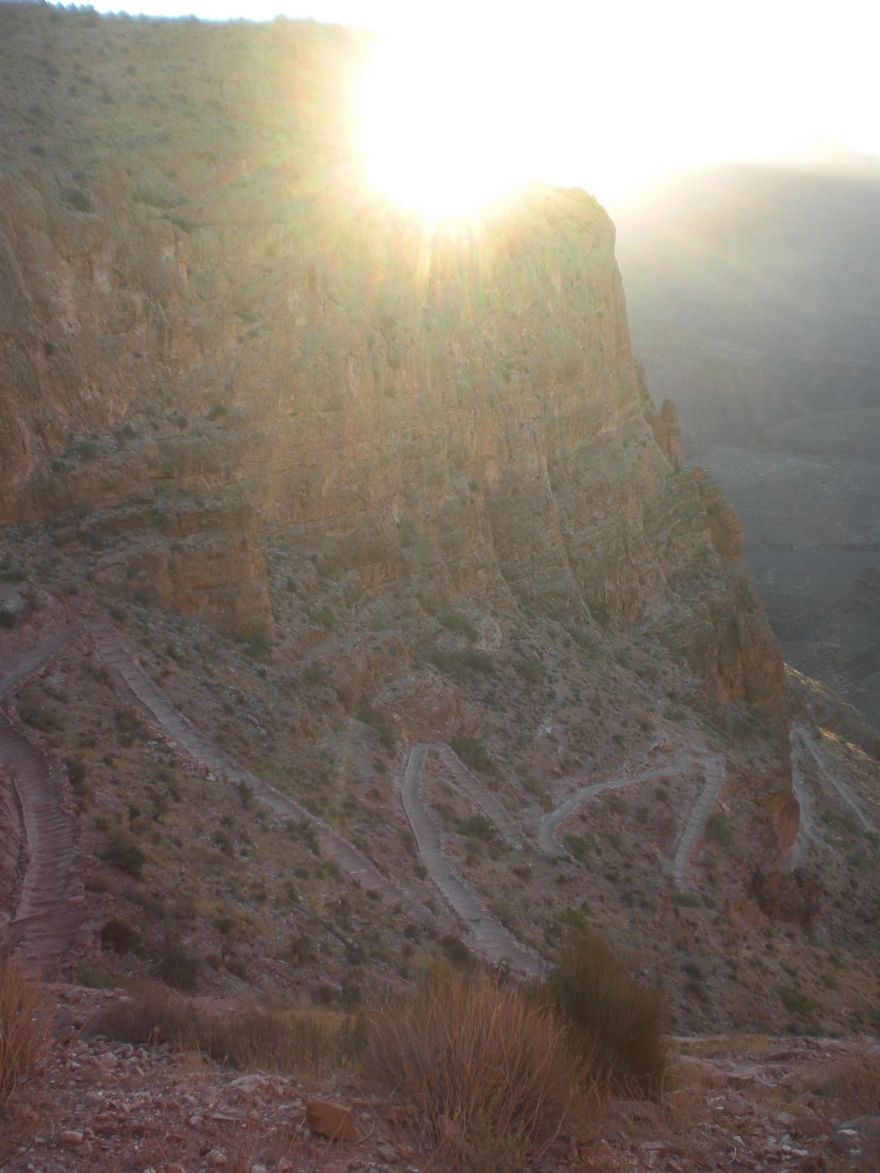 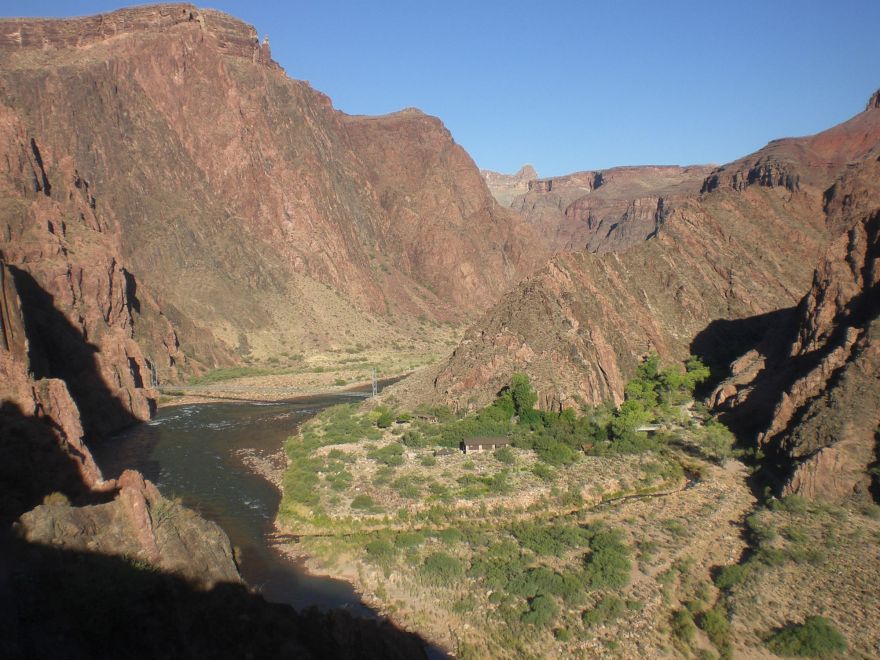 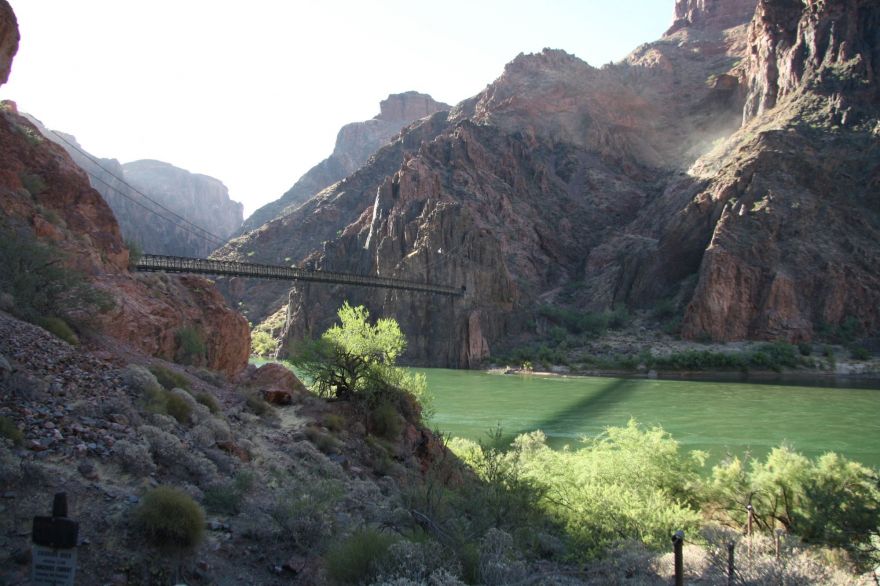 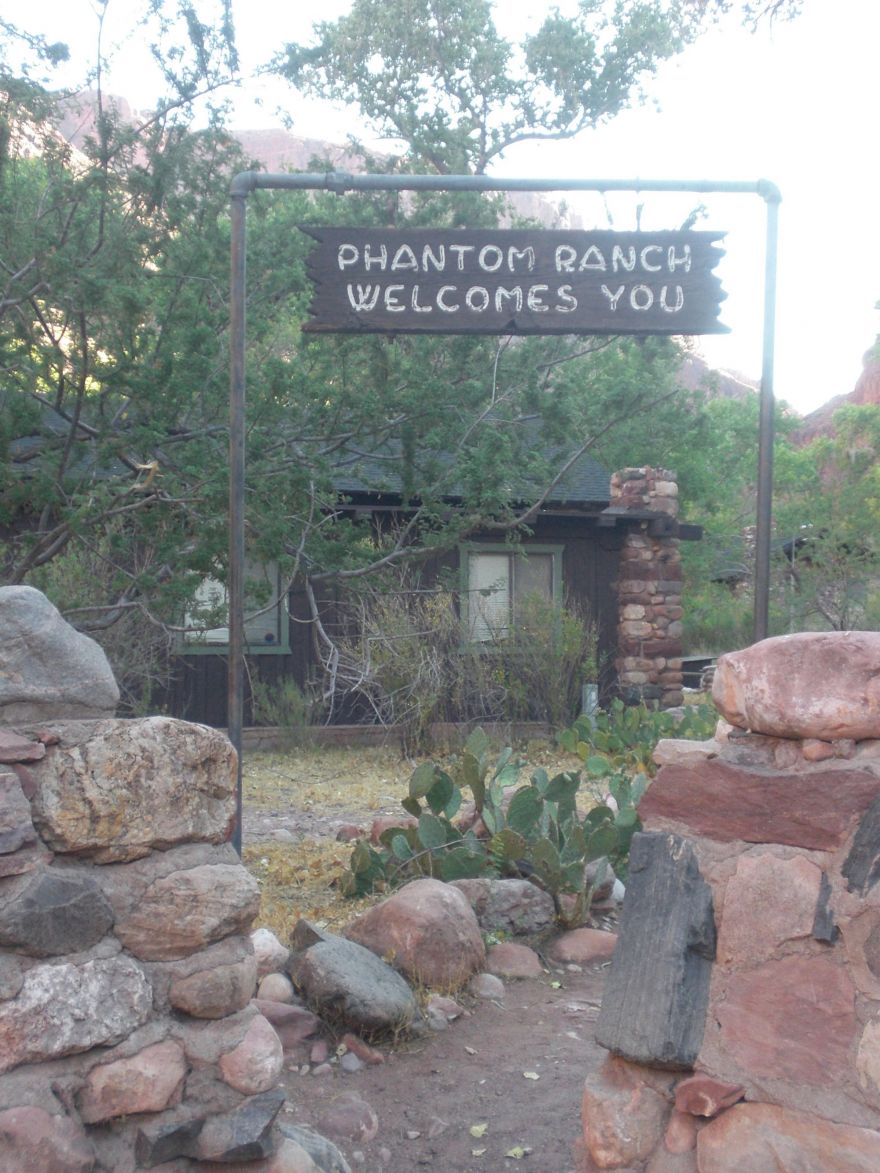 We arrived at the Phantom Ranch at half past seven. However, they were closed until eight. Hmmm..., shall we wait for a glass of lemonade or start or climb back? But we couldn't resist a glass of ice-cold lemonade, so we waited. In the mean time, we were able to fill all our water bottles, get some sunscreen and have some food. So we didn't really waste our time while we were waiting. Slowly, more and more hikers appeared, where it also appeared that we were the first to arrive at the Phantom Ranch today. Ok! When the Phantom Ranch opened, we finally got our well deserved lemonade: delicious indeed. 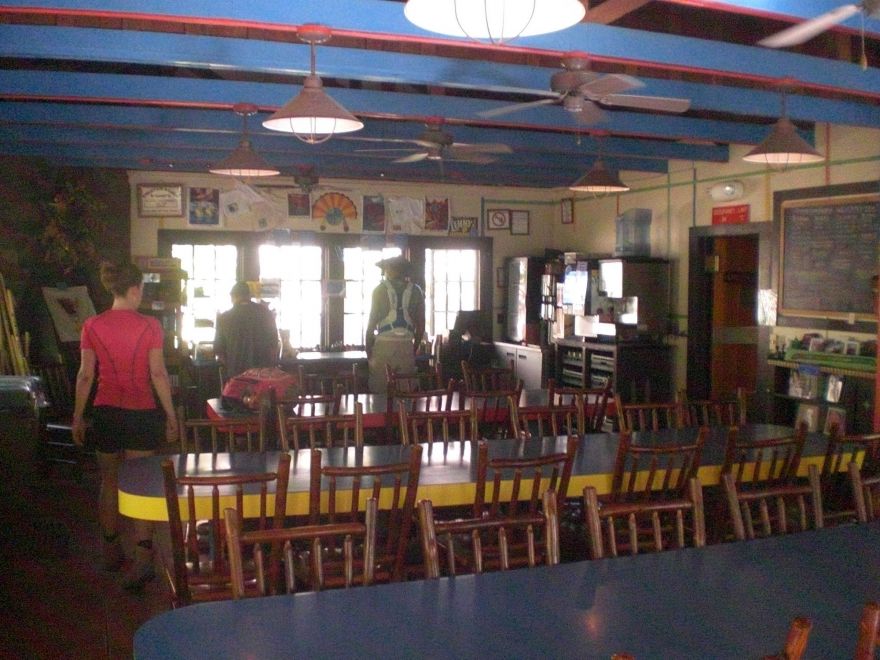 Way too long we enjoyed our drink and talk with other hikers... We left the Phantom Ranch at nine o'clock. We didn't took the same trail back up again, but instead headed towards the Bright Angel Trail (which should provide more shade and three water points). When we left Phantom Ranch, the temperature already was at about 40 degrees Celsius. Shadow and water would be our best friends for the rest of the day. 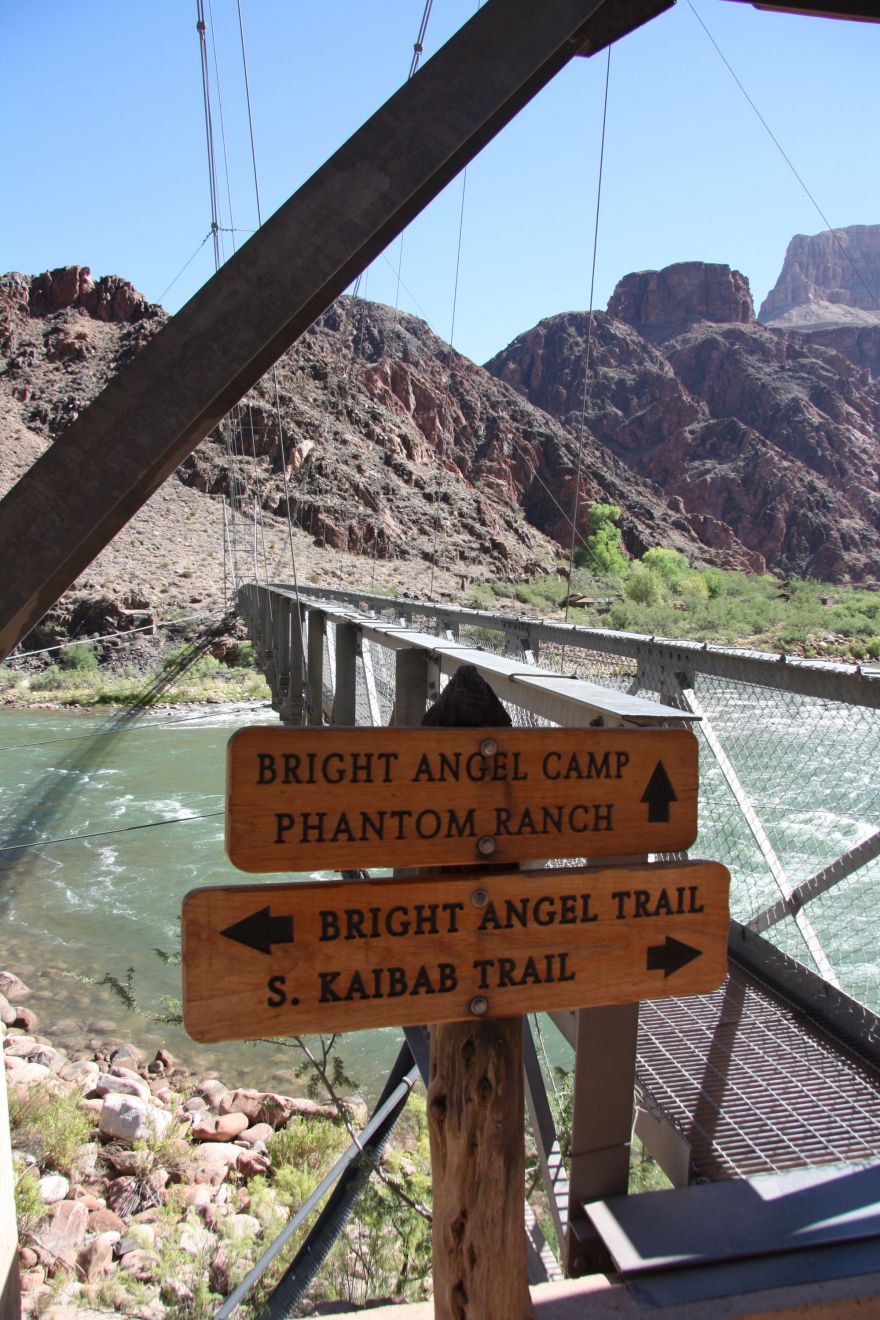 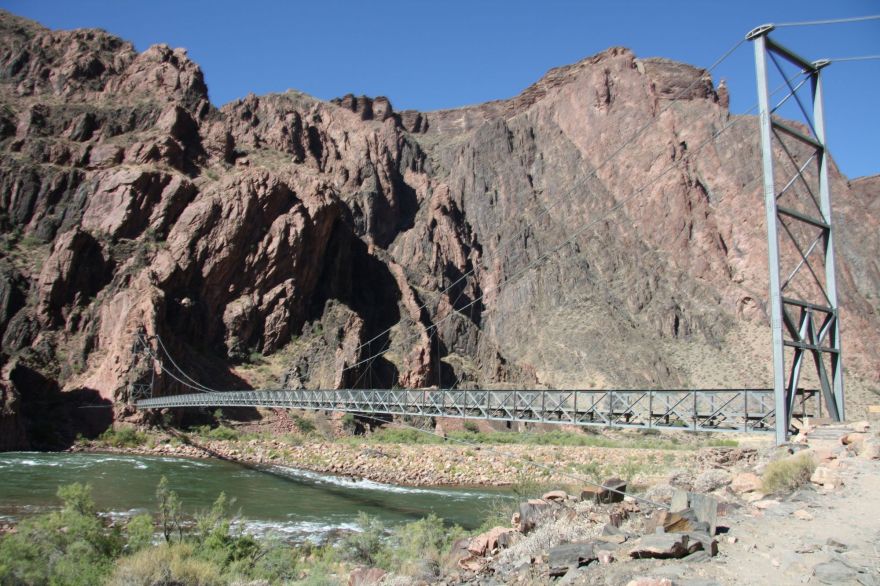 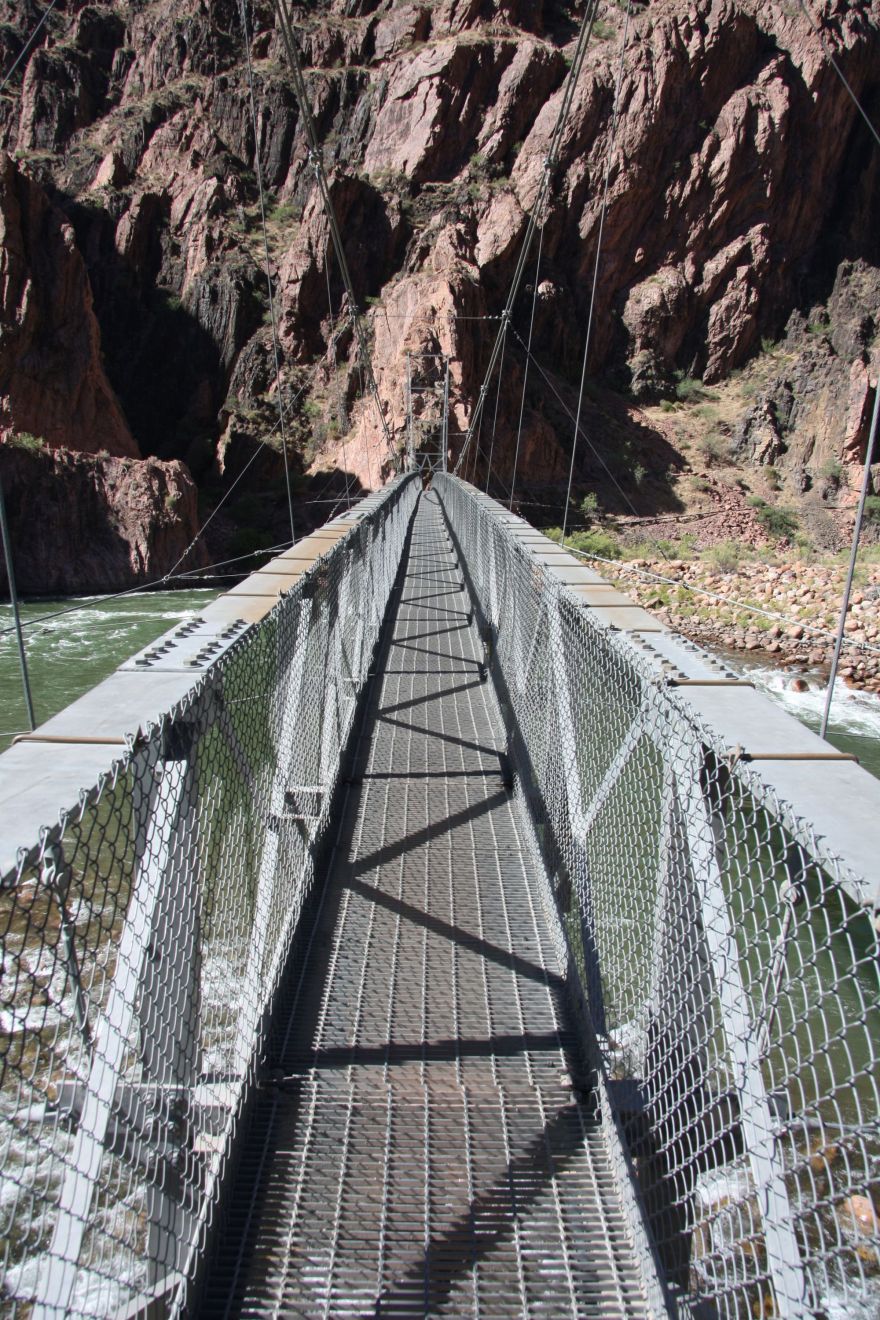 The first part of our way back to the top of the South Rim started fairly easy, the trail climbed very smooth along the Colorado River. But once it turned away from the river, it started to climb seriously. The distance of the total hike (about 25 kilometer) will not be a problem for the average hiker, nor for us. But the steep ascend, pfff... When hiking towards the Tonto Plateau, it was ten in the morning and way above 40 degrees Celsius. We were therefore amazed to see day-hikers still walking down at this point. An hour later, we arrived at Indian Garden. The first official point where we could fill-up our water bottles and enjoy some shade. We also noticed the first 'victims' of the day: some unprepared hikers were ordered by a ranger to stay at Indian Garden until nightfall because the temperature was way too high for them to hike back during day-time. We took some fruit bars and continued with the hike. Gradually, the path became steeper and steeper. Luckily there were two more rest places where we could enjoy some shade: 3 miles and 1.5 miles before the end of the trail. After a long and brutal hike, we arrived at half past three in the afternoon at the South Rim. Absolutely no record time for us. It was also at this moment, we noticed a warning sign that warned for extremely high temperatures today. Hmm... why do we always see such signs when we get back. Luckily, we made it. By the way, thunder storms are a regular phenomenon late afternoon. We had a great weather the entire day, but be prepared for rough weather.

Even though the hike was one of the most extreme day hikes we have ever done, it was absolutely worth it. The lemonade, but moreover experiencing the Grand Canyon from within the canyon was absolutely breath taking. If you know what you are doing, it is possible to walk the South Kaibab to Bright Angel Trail in just one day. However, if you have the slightest of doubt, please do not consider this hike as a one-day hike. Instead, make it a two-day hike and camp at Phantom Ranch campground, if considering this hike at all. Thereby, a lot of people still think that they can hike to the Colorado River with just one 500 ml water bottle. It is because of these people, that rangers have to rescue people on a daily basis.