At 9am, we were ready to start hiking the Laugavegur. The trailhead was just meters away from where we were standing. A crowd of people was, just like us, taking a last look at the large map of the Laugavegur. As soon as we started walking, we left the crowd behind. We followed the red markers into the Laugahraun lava field: huge boulders of lava bordered both sides of the path. 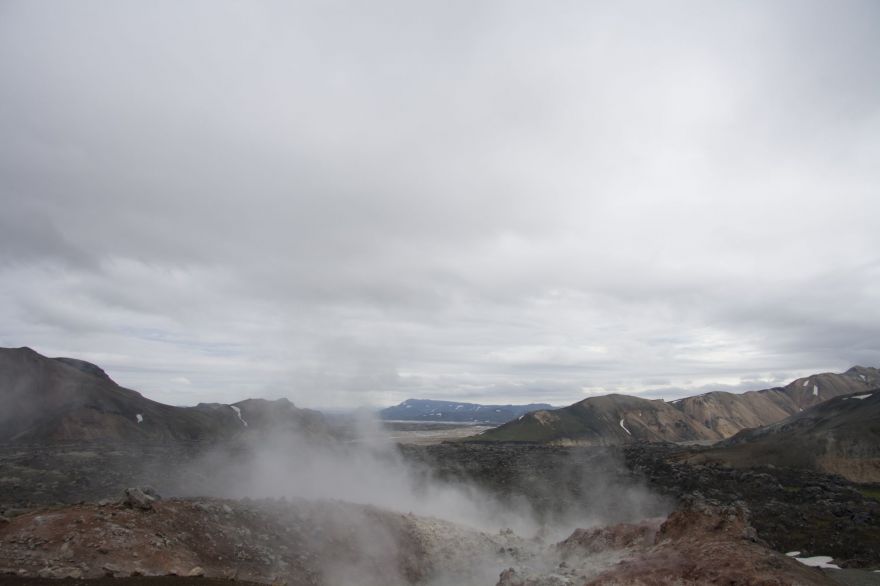 Suddenly, a large valley with rhyolite mountains all around appeared in front of us. A beautiful spot to take a break, as some people did. However, as we had only walked one kilometer and therefore felt it was too early to take a break, we continued and followed the path up the mountains. Meanwhile, taking in the great landscape around us, including the steaming 'hot pots', which were, unfortunately, way too to take a bath. 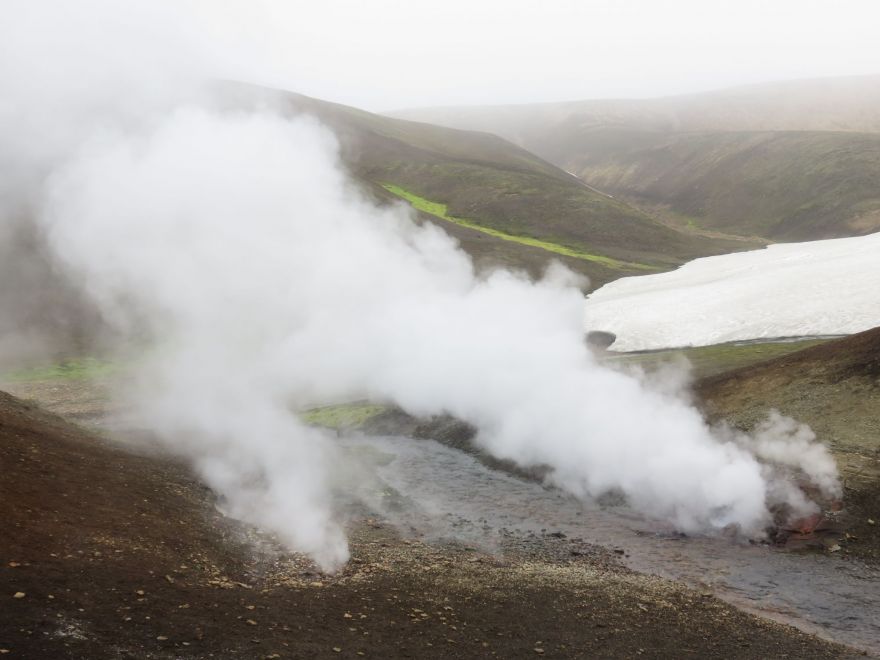 While steadily climbing higher and higher, the blue sky, made place for a gray overcast. When we walked onto the first large ice field of the day, it even started to rain. The drizzle was light enough to continue without rain gear, but hard enough to take all visibility away. We couldn't even see the next trail markers. 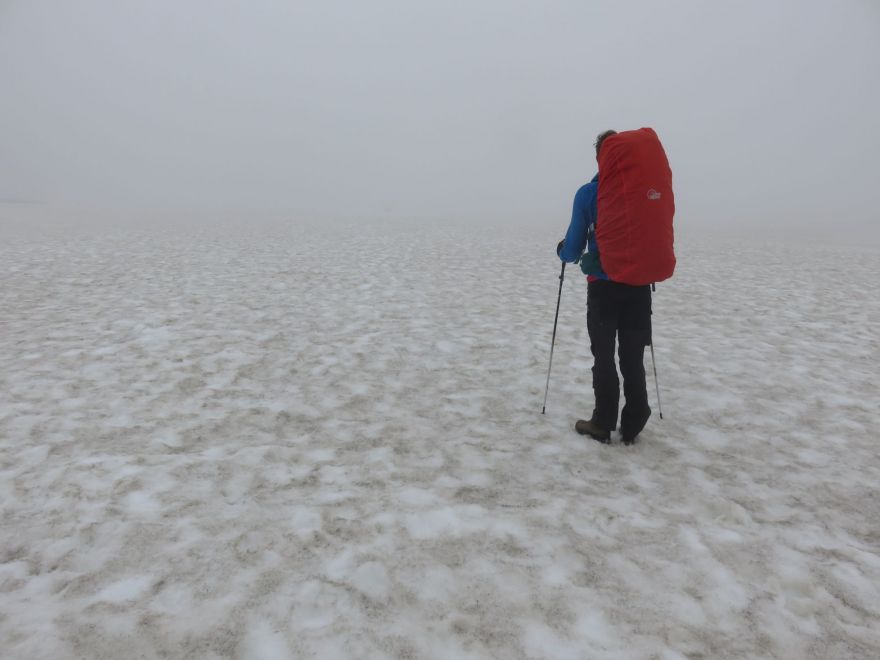 Luckily, however, dozens of people walked here before us, carving a clear path in the ice. We continued meter after meter, without any visibility except for the ice under our feet. Until we suddenly saw an intermittent flash light. Somebody walking with a headlight? But no, it appeared we had reached the first hut (Hrafntinnusker). 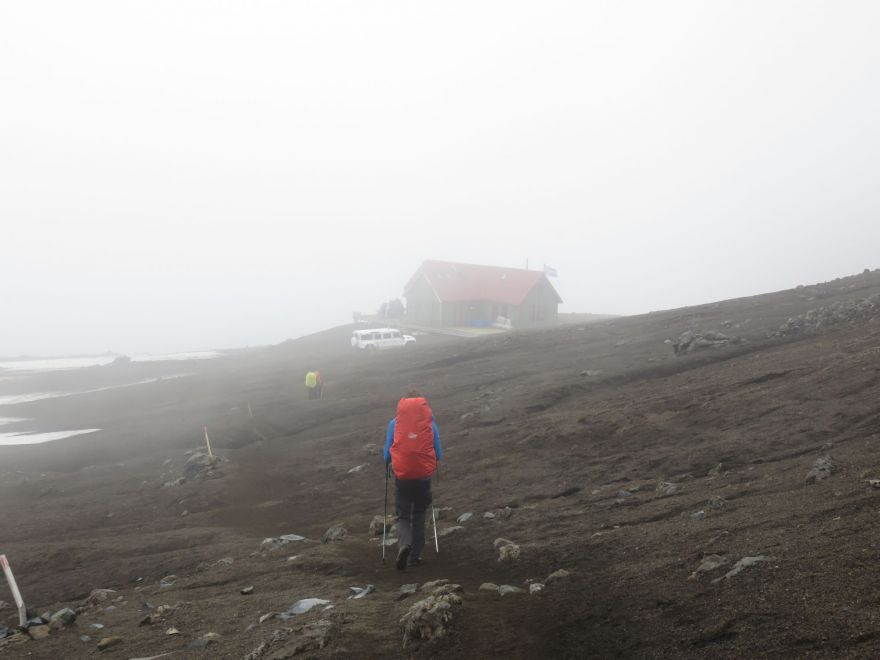 Before we pitched our tent, we made ourselves some lunch: noodles with hartkeks (biscuits). We discussed our day with a French couple, when, to our surprise, two cyclists turned up. They were cycling from Landmannalaugar to Porsmork, in one day! Wow! When we finished our lunch, the French couple decided it was too cold and continued to the next hut, another 12 kilometer. Although we also hesitated whether or not to continue, we decided to camp at Hrafntinnusker. Because of the strong and cold wind, we pitched our tent in the shelter of some rocks. 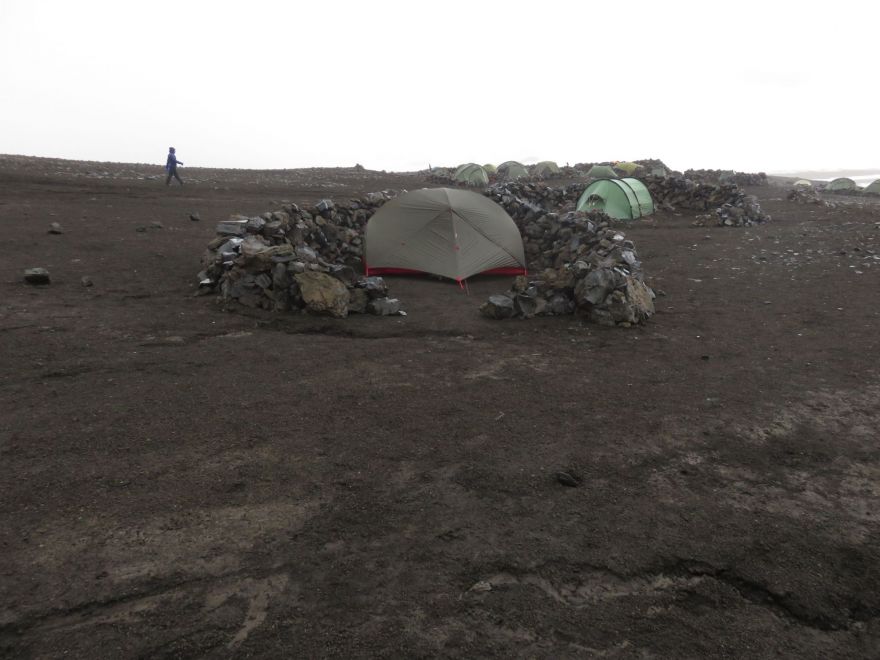 When we settled for the night, the sky opened up and gave us a great view at the mountains around us. When we woke up the next morning, the sky was clear blue, giving us an even better view at the valley ahead of us. What a damn good decision to stay at Hrafntinnusker, as most people that continued because of the weather yesterday, would now be jealous.