Our adventures in Spitzkoppe

After leaving Etosha National Park, we planned to drive to Swakopmund. To get in Swakopmund, you can take the highway, which takes approximately three hours. However, you can also make a detour via Spitzkoppe. Although it requires you at least one extra day, a visit to the Matterhorn of Namibia, as Spitzkoppe is often called, is definitely worth it.

In the desolate landscape, seeing the 700 meter high Spitzkoppe loom in the distance is rather remarkable. Before we entered the park, we had lunch at the side of the road. We were parked there for about half an hour and no other car passed us during that time. Only a man suddenly appeared, we still don't know where he came from as we could not see a damn thing in the area. 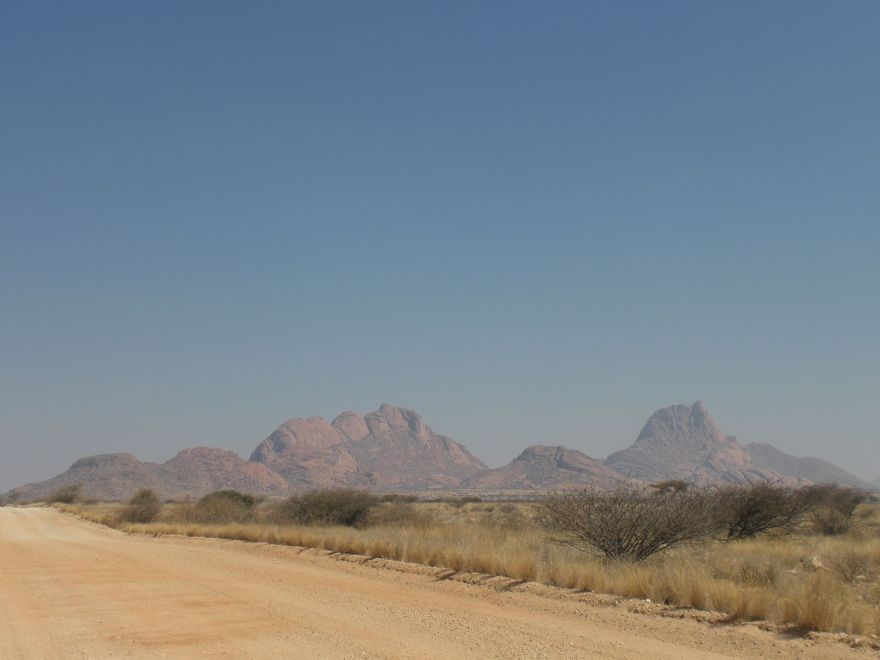 After our lunch, we continued to Spitzkoppe. The area is controlled by the local Damara community. To support their community, every visitor has to pay N$100,- entrance fee. We also decided to camp in Spitzkoppe, which was another N$40,- per person and N$10,- for the car. Because it was not busy at all, we could choose our own campsite. We drove off to explore all the sites. Because they are located pretty far from each other, this wasn't so easy. The map they provided wasn't very helpful neither. However, we were able to choose one: site 20. If you happen to be able to choose one, go for site 20. The closest neighboring site is pretty far away (we didn't hear nor see other tourists) and the view is very spectacular. The only thing is, there are no facilitates. Ok, there are facilities near the entrance, but that was a 20 minute drive away. 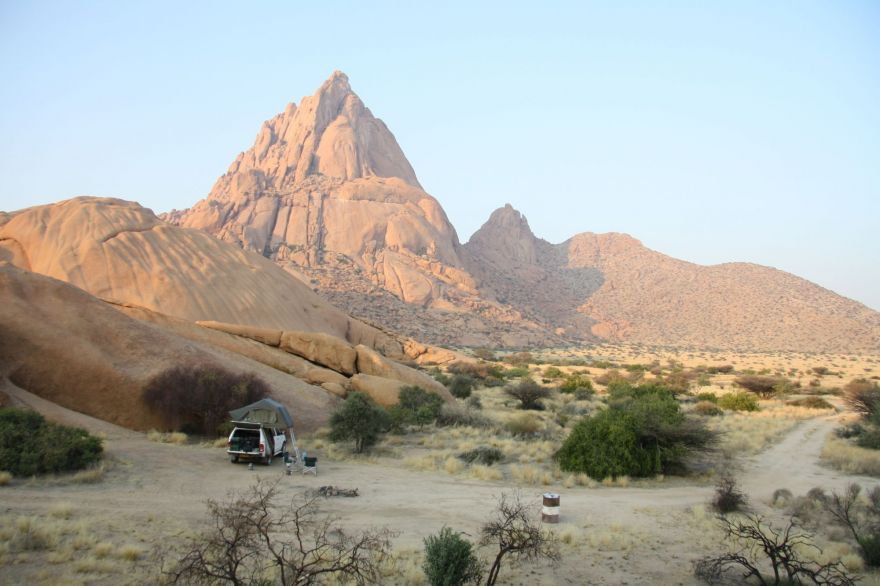 After finding ourselves a campsite, we drove to the Pontok mountains. Spitzkoppe is formed by a number of mountains. The highest, Groot Spitzkop is 700 meter high (1.784 meter above sea level). This 700 million year old granite rock was first climbed in 1946. Up to today, climbers find it hard to climb the mountains of Spitzkoppe because of the slippery granite. However, to provide access to some parts of the mountains in Spitzkoppe, they have installed cables. The Pontok Mountains can, therefore, be explored by nearly everybody (as long as you are not afraid of heights). If you make the climb up via the cables, you will get a view that is absolutely breathtaking. However, we also felt a little disappointed. The centuries old rock paintings that can (or better: could) be seen in the Pontok Mountains have been vandalized by tourists. A shame... 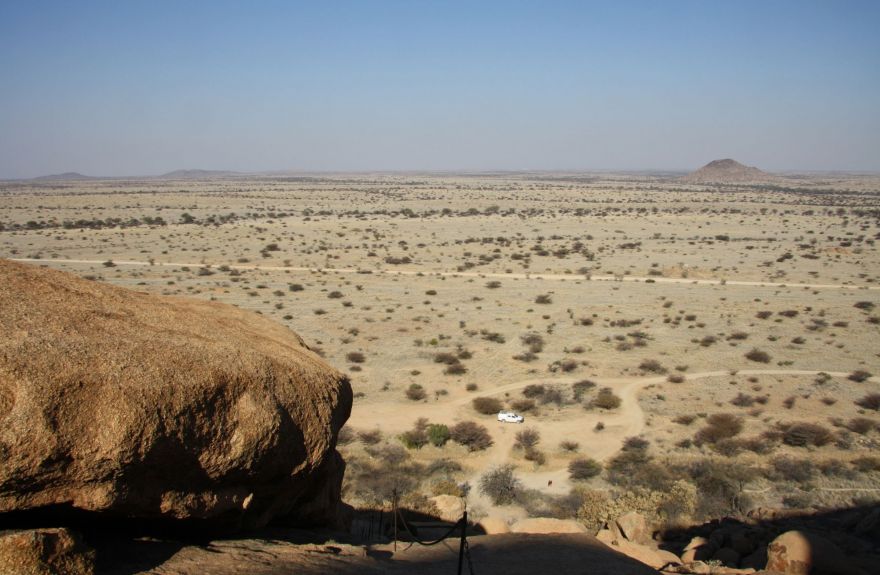 We descended the same way as we came up and explored other parts of Spitzkoppe. Other parts? Yes, because of influences by the weather, there are some pretty amazing rock formations. Including a natural bridge. Plenty to explore! After exploring probably every single rock in Spitzkoppe, we headed back to our campsite. Even with the map in our hand, we had difficulty finding it, but after driving multiple rounds on the campground, we suddenly passed it. We pitched our tent and climbed one of the rocks next to our site to enjoy the sun set. Ahhh, Spitzkoppe is truly beautiful... 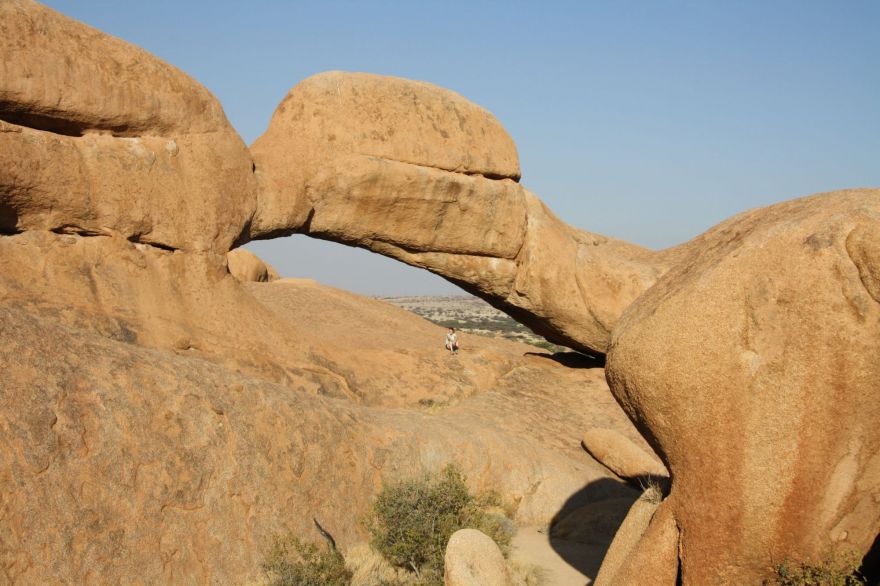 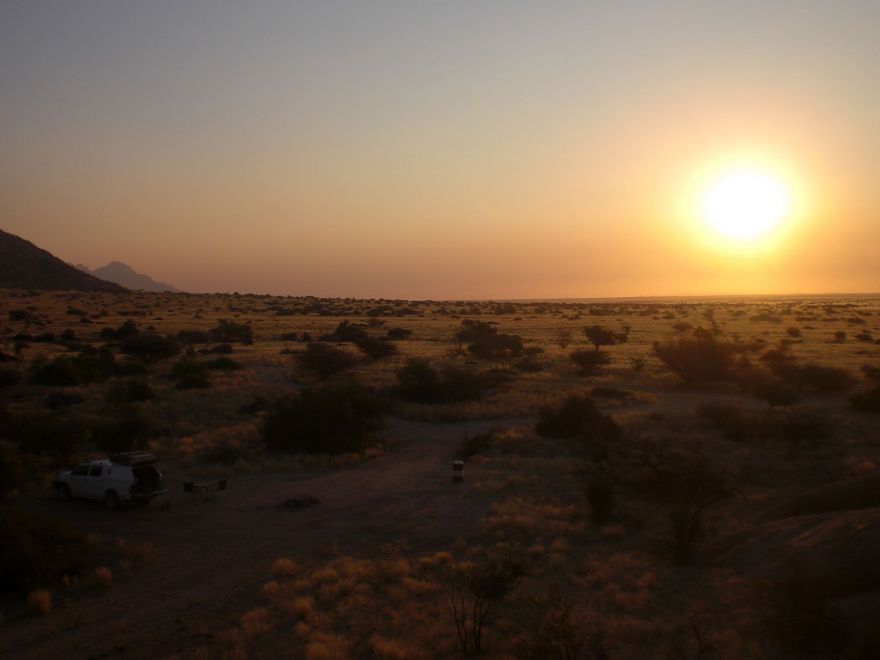