Te Araroa: From Ngunguru to Waipu

After a relatively cold night in Ngunguru, we left at 7am. First, we had to negotiate 8 kilometer of gravel road. Not the most interesting start of the day. However, the following 4 kilometer was nice. A grass track brought us to a river that we had to cross twice. According to the trail notes, this was deep river and care should be taken when crossing the river. Well, maybe the water can come up, but when we crossed it, the river was not even ankle deep. Have survived these two river crossings, we were rewarded with another 13 kilometer of road walking (tarmac). With a nice walking pace, to get this over as quickly as possible, we managed to arrive in Pataua at 12:30pm. Although we had already covered 25 kilometer by that time, we wanted to walk a few more kilometers. However, in order to do so, we had to wait for the tide to drop. Meaning we were able to take a very long break. 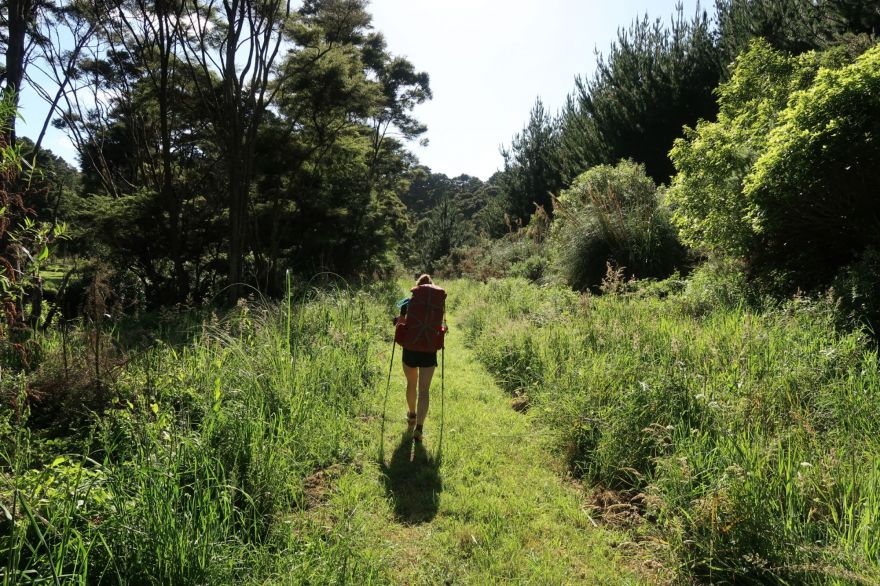 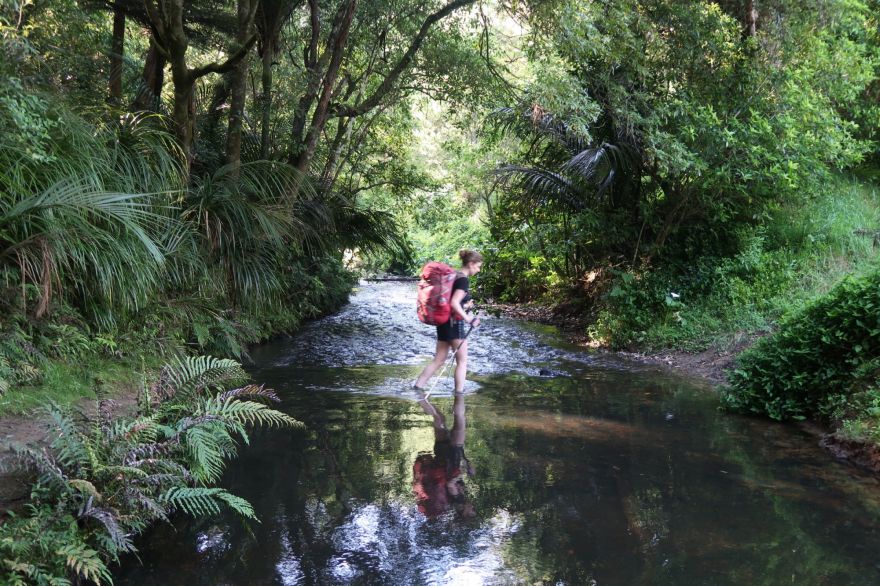 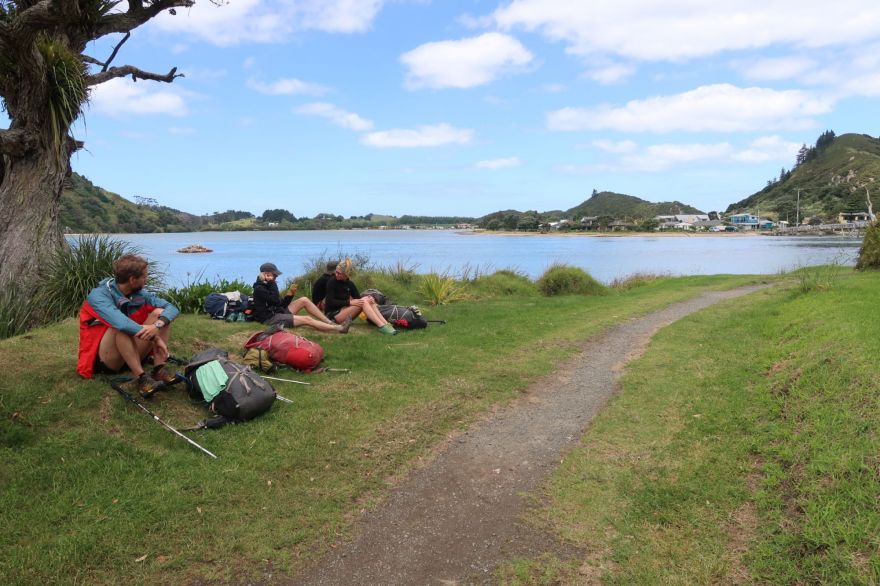 At around 4:15pm, we left Pataua. Because we sincerely enjoyed the road walking of this morning, we did another 2 kilometers of road walking in the afternoon as well. Luckily, the underground changed from tarmac to sand, as we had to cross the Taiharuru Estuary. We followed a track close to shore and had to negotiate some serious mud. While walking in the mud, Jasper cut his heel on a oyster (not his best couple of days on the trail). We could have crossed the Taiharuru Estuary in one go, but with all the kilometers we had already covered, we called it a day and went to Tidesong B&B where we arrived at 5:30pm. Reception here was very warm, the couple is used to having TA-hikers at their place and proved to be well prepared when a fresh-baked banana cake came out of the oven. De-li-ci-ous! 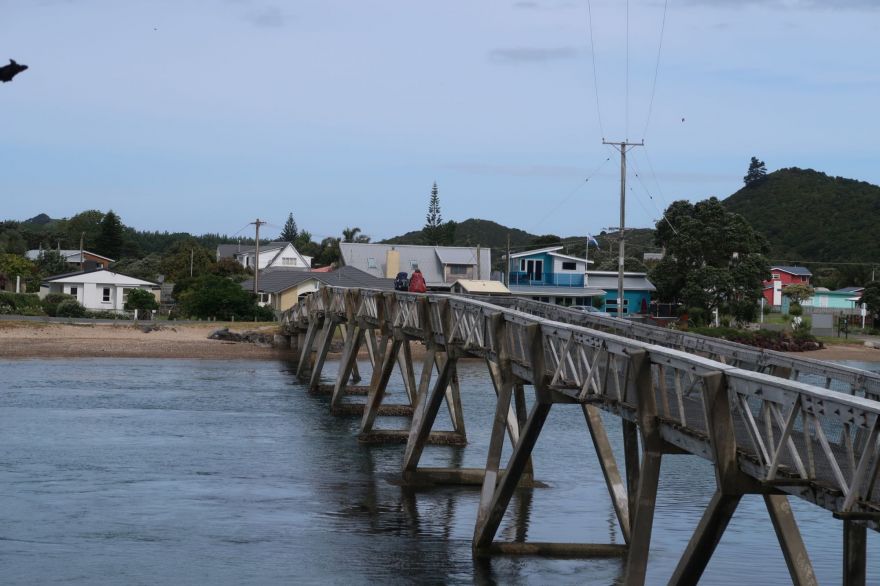 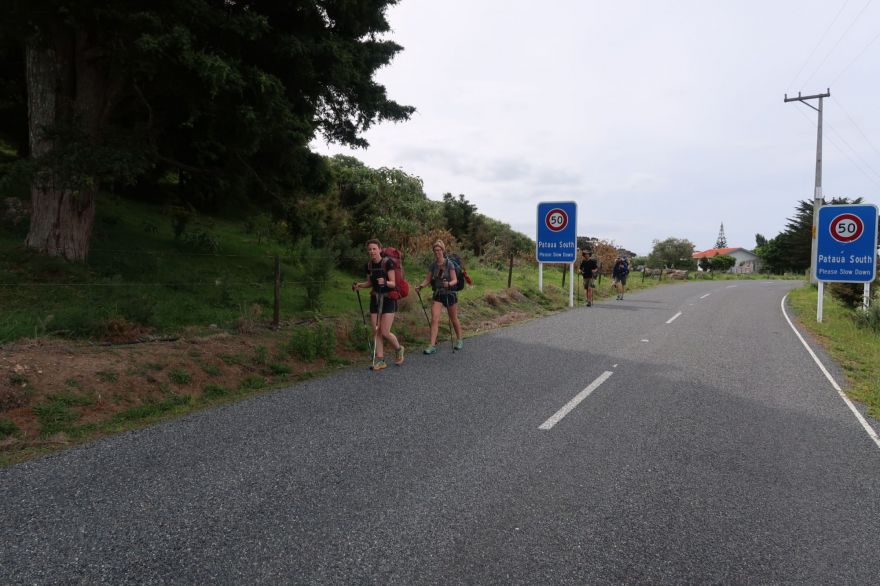 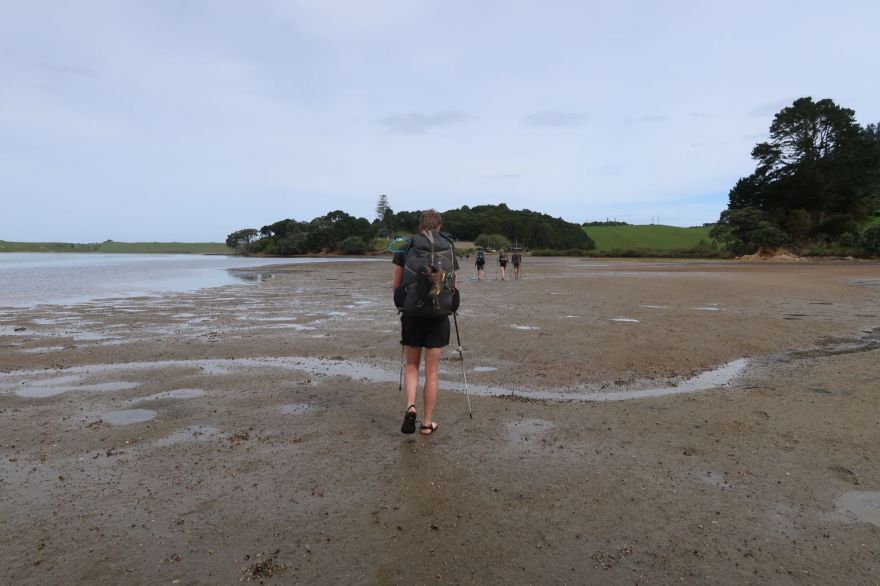 After a delicious breakfast with toast, muesli, fresh fruit, sausages, bacon and egg (we can highly recommend Tidesong!), we left Tidesong behind and set off for another day on the trail. Together with Ross (one of the owners of Tidesong), we walked to the river. She pointed us on a spot where we could best cross the river and gave us a bucket and a towel we could use to clean our feet on the other side of the Taiharuru Estuary. We had not to worry about the bucket, we could just leave it somewhere on the other side and they would find it someday. What a service and what an amazing people. 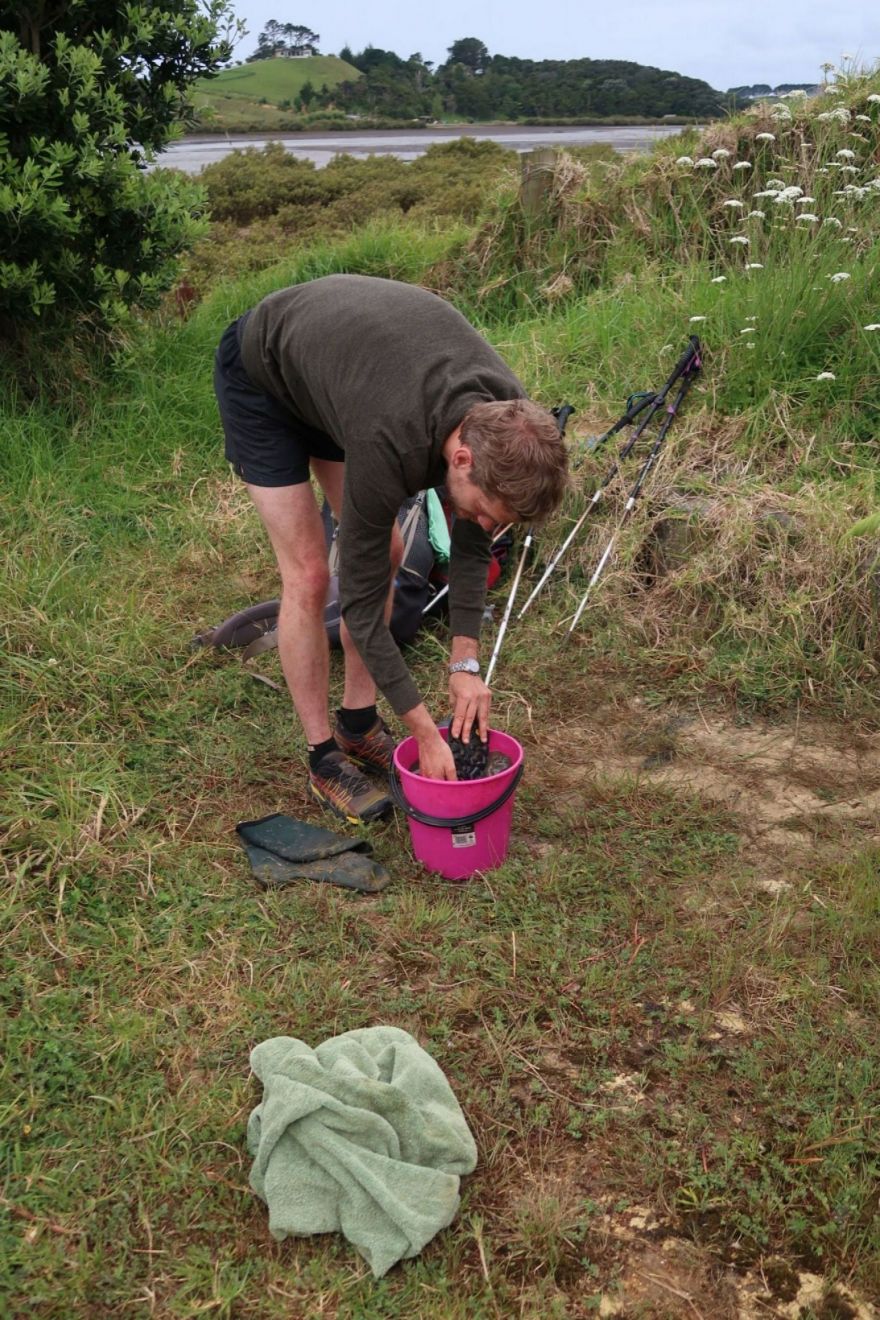 When all feet were clear, we started our climb to the top of Kauri Mountain. A gravel road brought us close to the top. Only the last few meters, we had to negotiate some bush. Not that that was a problem, because the view from both the road as the top were absolutely stunning. However, everything that goes up, must come down again. And immediately after reaching the top, the track descended steeply. All the way down until we arrived at the beach. Again, the tail notes stated that we had to cross a deep river once we arrived at the beach. But also this river proved to be very easy to cross: we could literally step over the water without getting our feet wet. That is not what we were expecting. Okay, we have to mention that we crossed this river when it was low-tide, so it may be more difficult when the tide is high. 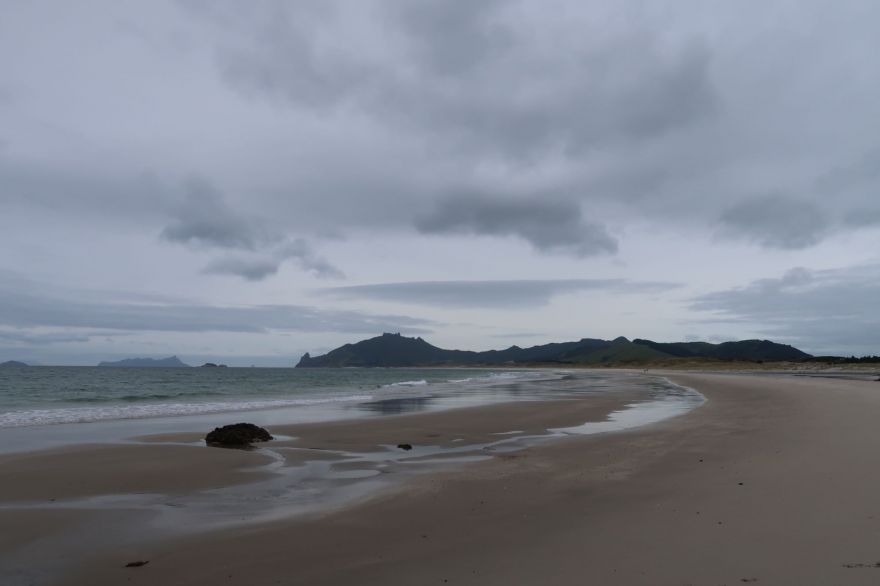 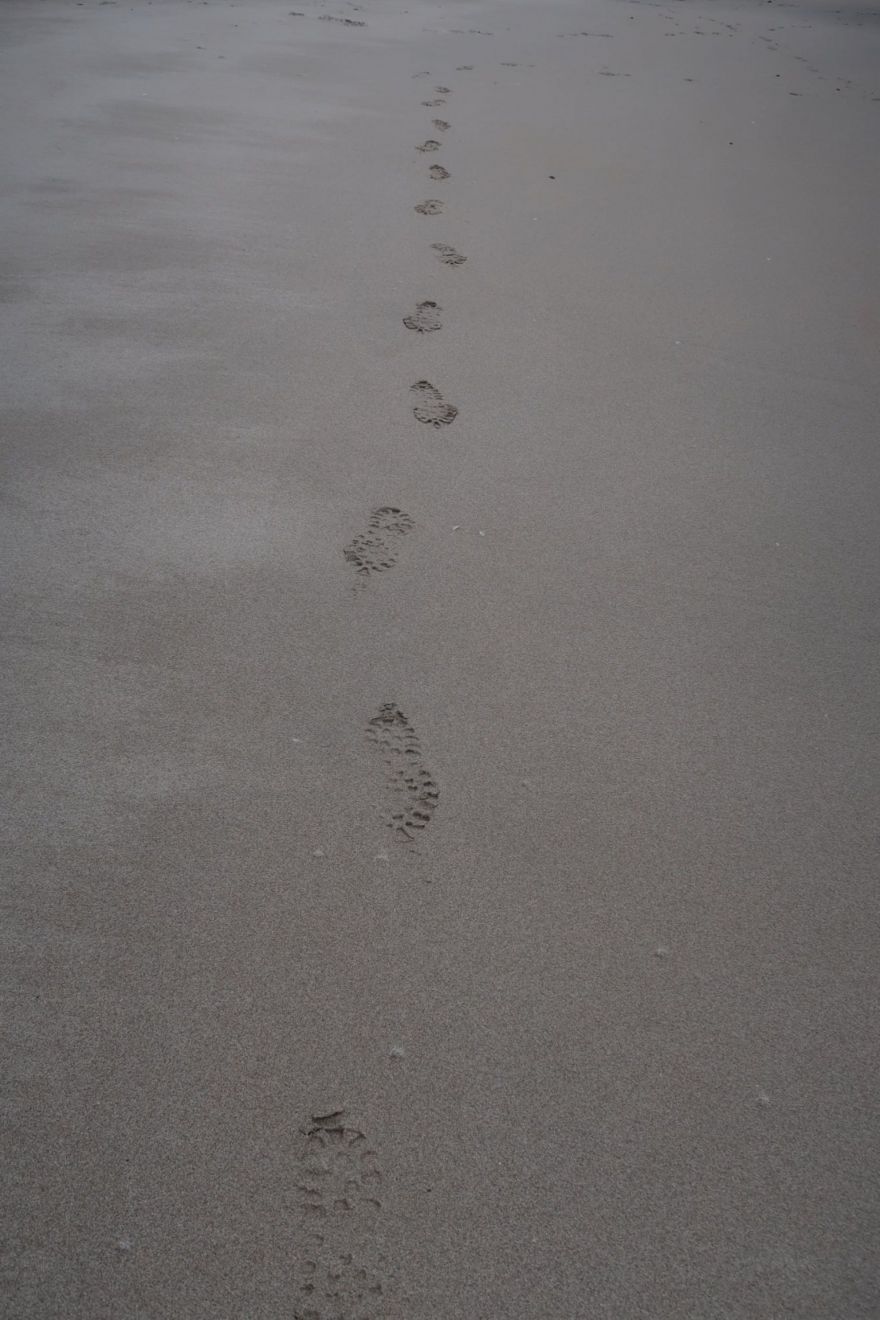 When we were almost at the end of the beach, we had to climb over some rocks (the tide was already coming in). Eventually, we arrived at 11am at the start of the Bream Head Track. After a short (30 minute) break, we started the Bream Head Track with a steep, very steep 2,5 kilometer. At some points, we literally had to scramble over some rocks, but we managed to climb to the 450 meter high top. At the top, the view was absolutely stunning: we could see all the kilometers we had walked today, and where we were going to the following days. But just as you think that this was the top, a steep descent, followed by another steep ascent brought us to a second (slightly lower) top. Because lunch time had already passed, we took a break at this second top, before following a lot of stairs down. Once we arrived at the water (sea), we followed the shoreline to Whangarei Heads. We first went for an ice cream at the local Tip Top, before finding us a place for the night. This actually proved to be rather difficult as everything was fully booked for the night. Eventually, a local pointed us in the direction of campsite that was under construction. We had to walk 1,5 kilometer back to get there, but it appeared that that was the only option for now. 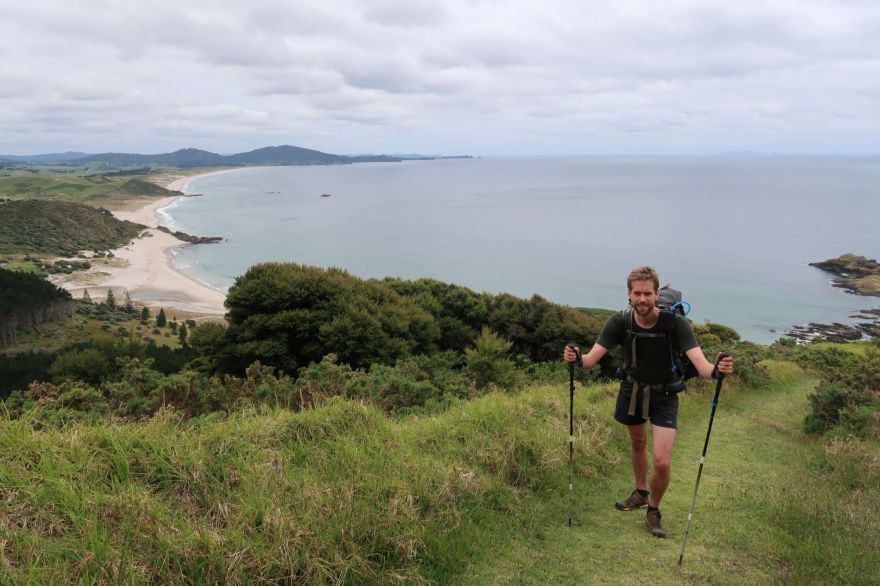 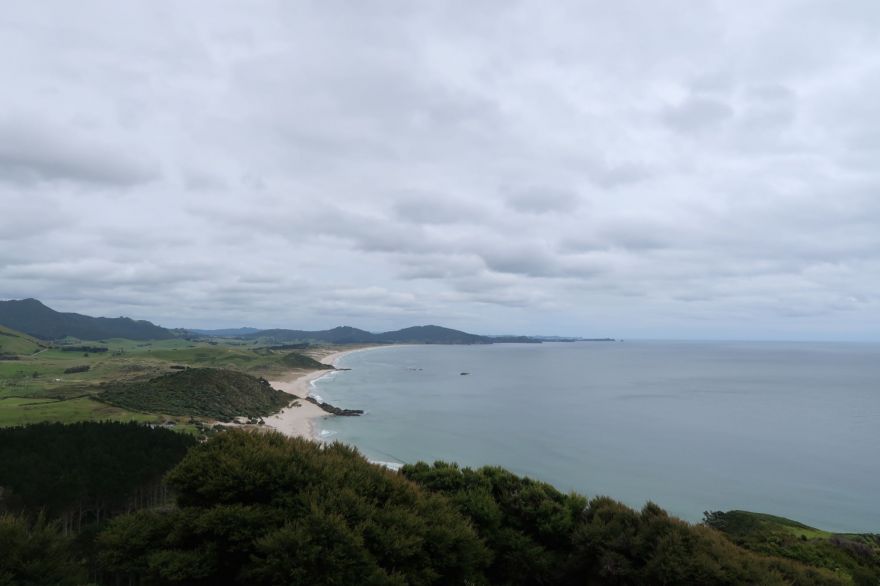 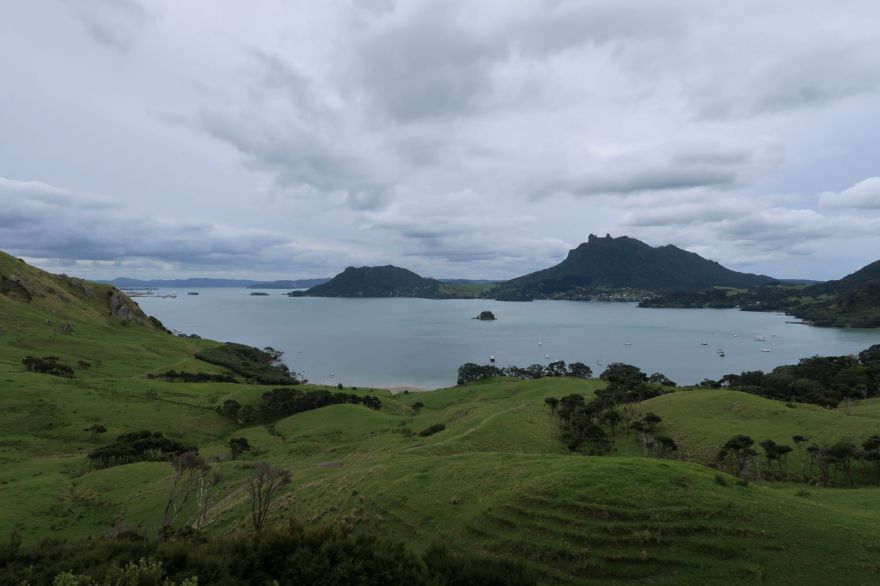 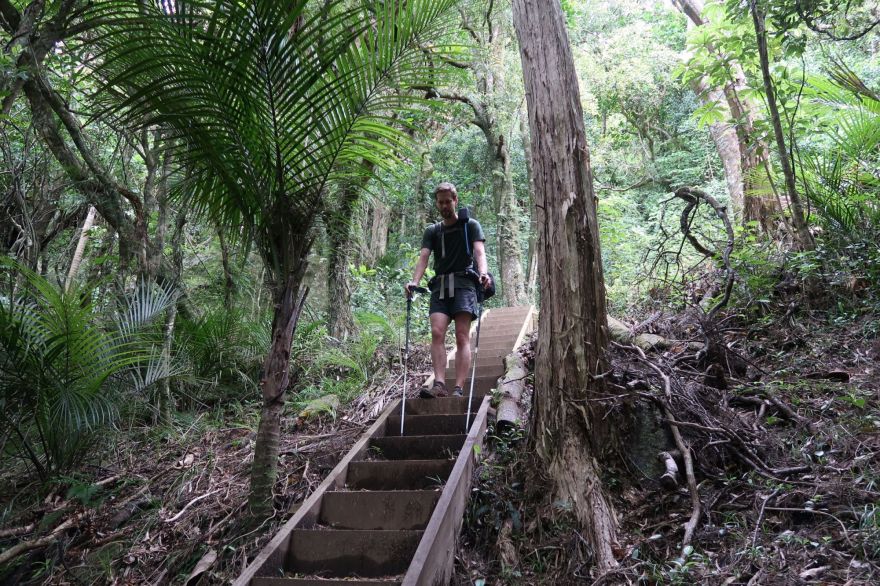 The weather forecast for the next day was crap: the second tropical storm of the year was predicted to land near Whangarei Head. Rain, wind and thunder was predicted. Not really something you want when hiking, and especially not when you have to cross a large section of open water. And that was exactly what we had to do: we had to get a boat to get from Whangarei Heads to Marsden Point. Because of the weather, Peter (a local captain who gives TA-hikers a ride across), didn’t want plan anything for Saturday because the wind and waves would make a crossing almost impossible. However, when we woke up on Saturday morning, the weather turned out to be rather nice. It appeared the tropical storm had turned away from and was heading back onto the ocean. As soon as we were able to, we gave Peter another ring and this time he was willing to bring us to Marsden Point. We packed our stuff and set-off to our rendezvous with Peter.

We had to walk for about one hour (mainly sidewalk walking) to get to Reotahi Bay. At the time that we should meet Peter: no Peter. Hmm… Luckily, he gave us a ring saying he would be little late. Apparently, next to the beautiful oil refinery, there is a large timber port. Every now and then, some trees fall in the water and Peter is the guy that get’s called to ‘rescue’ these trees. Because these trees are a danger to the shipping lane, time cannot be wasted, meaning Peter has to be stand-by 24/7. And that was exactly why Peter was out on the water now as well. 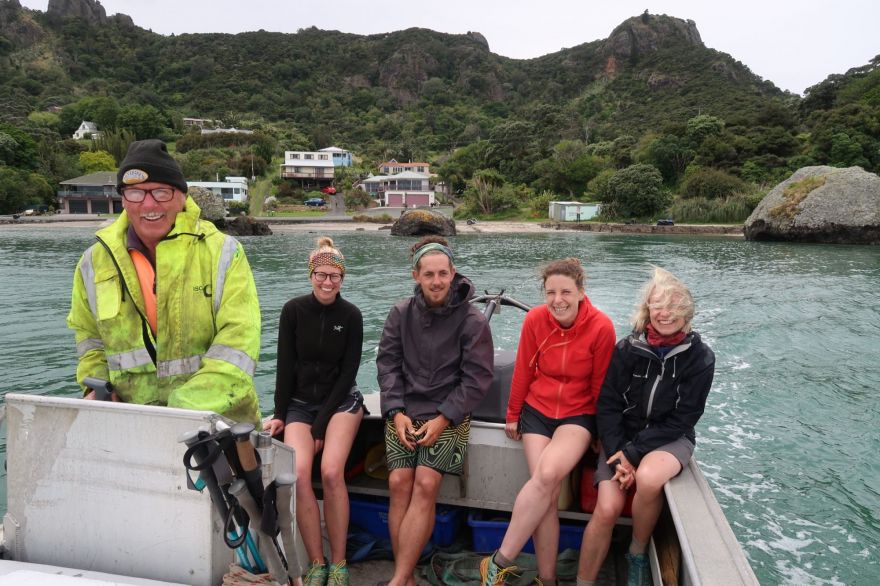 At about 11:40am, Peter arrived. After taking us on board, he brought us in about 10 minutes to Marsden Point. Marsden Point is by far the best part of the Te Araroa so far! Because it was high-tide, we were advised not to follow the Te Araroa Trail via the beach, but walk the road instead. Meaning we had quite a bit of road walking ahead. In Ruakaka, we took a lunch break at the local bakery before continuing to Waipu. This time, we did walk on the beach. As the tide was dropping, there was just enough sand for us to walk. However, it was clearly visible to us that it would not have been possible to walk here with high-tide, so it was a good choice to walk the road instead.
In Waipu, we found ourselves a place for the night in a BBH. We shared our ‘bungalow’ with the five of us (Yvonne, Nadja, Boris and us). After everyone had taken a shower, we went out for dinner at the local Pizza Barn. World famous if you have to believe the locals. Apparently, not only tourists eat here on a Saturday night. The place was crowded, but luckily there was still some space for some hungry hikers. However, with the size of pizza they serve here, our hunger quickly disappeared. 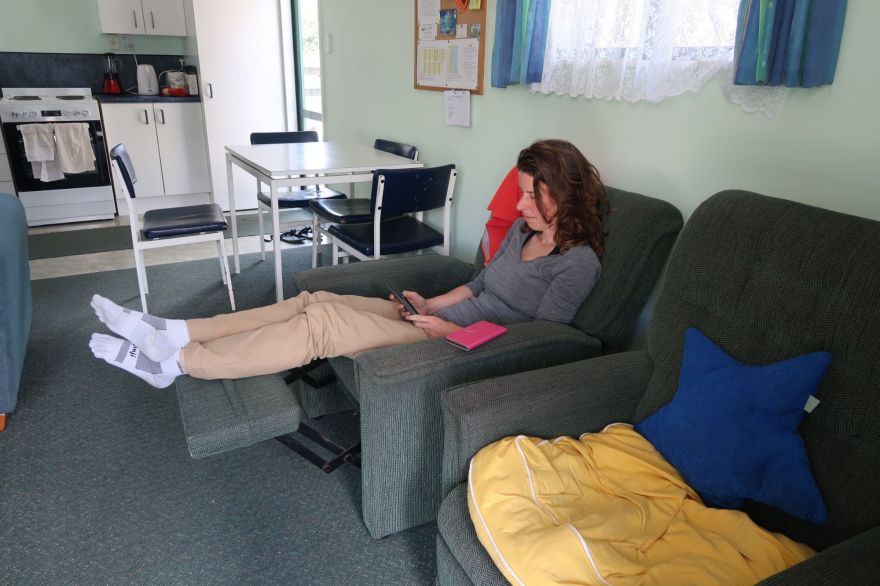