Monday, the 6th of November, we left again at 7am. A gravel road brought us into Russel Forest. But we knew that this road wouldn’t last for long. And we were right: the Te Araroa soon turned right onto a small, but good track. Even though, this proved to be too difficult for Jasper: he fell hard! On a concrete bridge, he slipped and fell on his right side. To make matters worse: he landed with his ribs on one of his hiking poles, resulting in difficulty of breathing for at least 4 days. After treating some of his wounds, we set off again. We soon arrived at the river, which we knew we had to follow for about four kilometers. However, Jasper must still has been a bit shaky from his earlier fall (which was about 10 minutes ago) as slipped again on the first step he made into the river. This time, he fell on his left hip. Not an ideal start of the day. 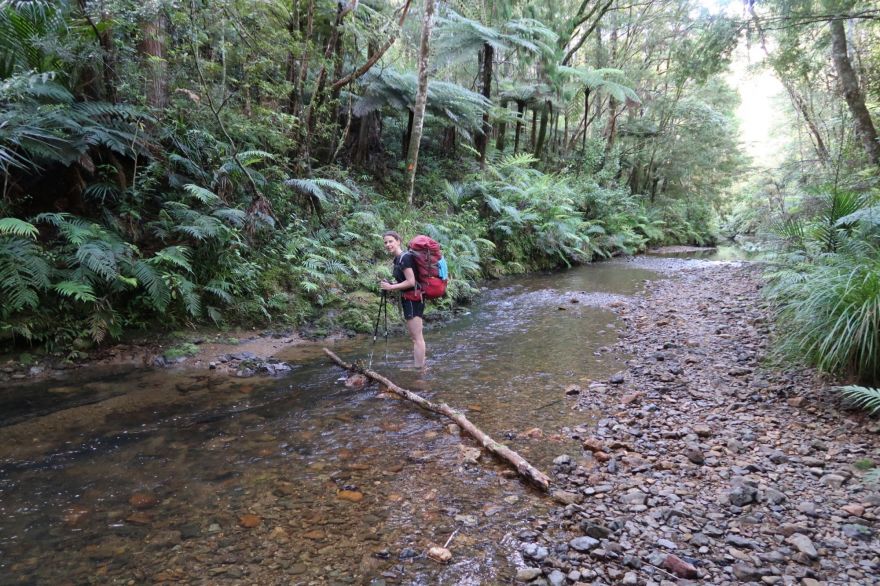 When we finally left the river, a long grassy track let us to a road. Not the most interesting road, however, we had to follow this tarmac road for 14 kilometers. Luckily, the type of tarmac changed every few kilometers, which brought a nice change to the scenery. No just kidding, the scenery was actually quite nice. But it was just the difficulty in walking (sore ribs and a sore hip) Jasper was experiencing, which made it a very, very long 14 kilometers. At about 3:30pm, we arrived in Helena Bay, where we pitched our tent in the garden of Jock and next to the tents of Yvonne, Nadja, Leigh and Boris. Jock is a local farmer with Scottish roots. He proved to be very hospitable to TA-hikers. And when his neighbor arrived, we even got to watch our very own comic show. The two of them together were so funny! 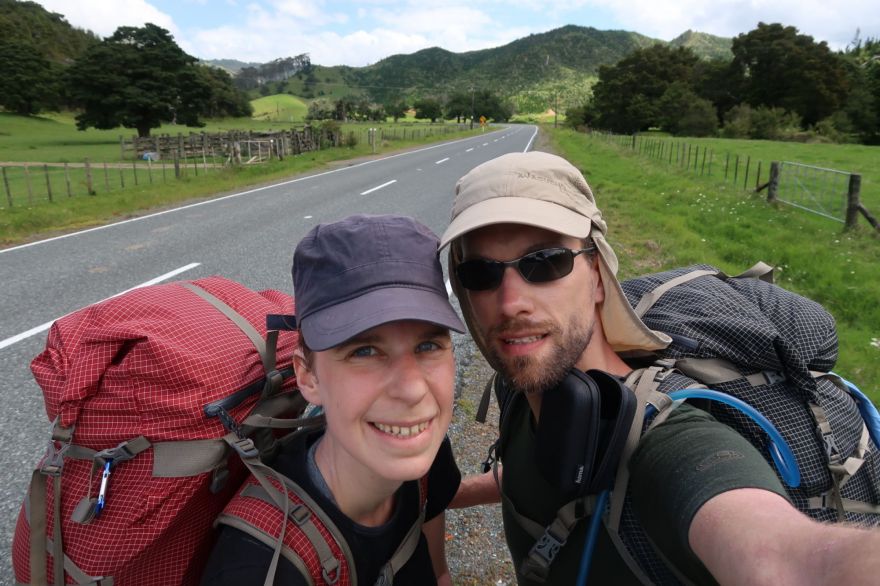 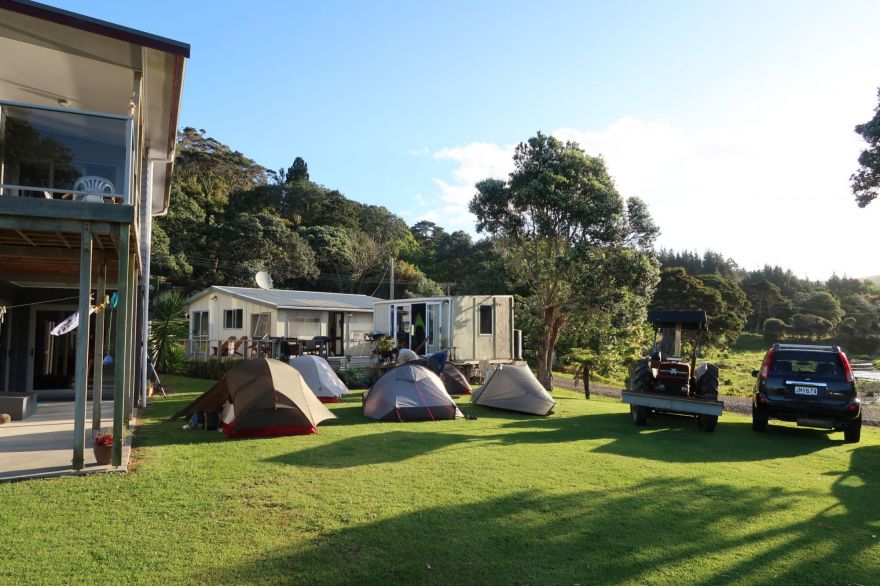 On Tuesday, we left at 7am again. Today would be another day with a lot of elevation. A short tarmac road brought us to a paddock followed by forest track. Some sections were rather steep. In normal conditions this proved to be slow going, but with sore ribs Jasper had to take an even slower pace. But he made it and once we arrived at the top, we had a magnificent view. 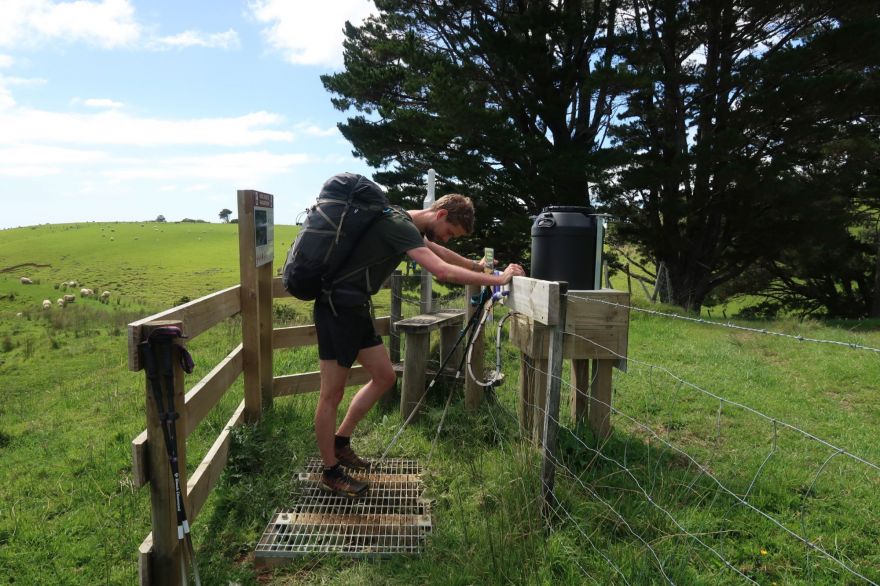 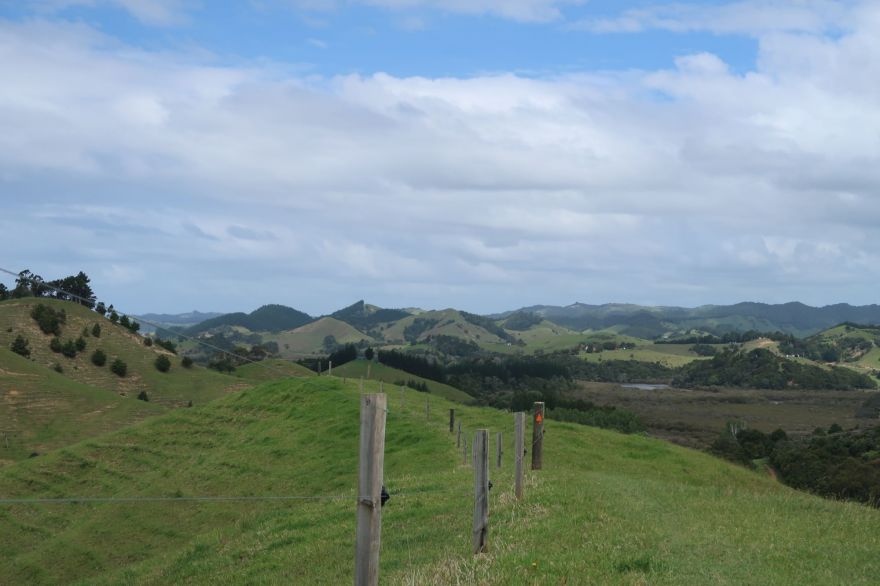 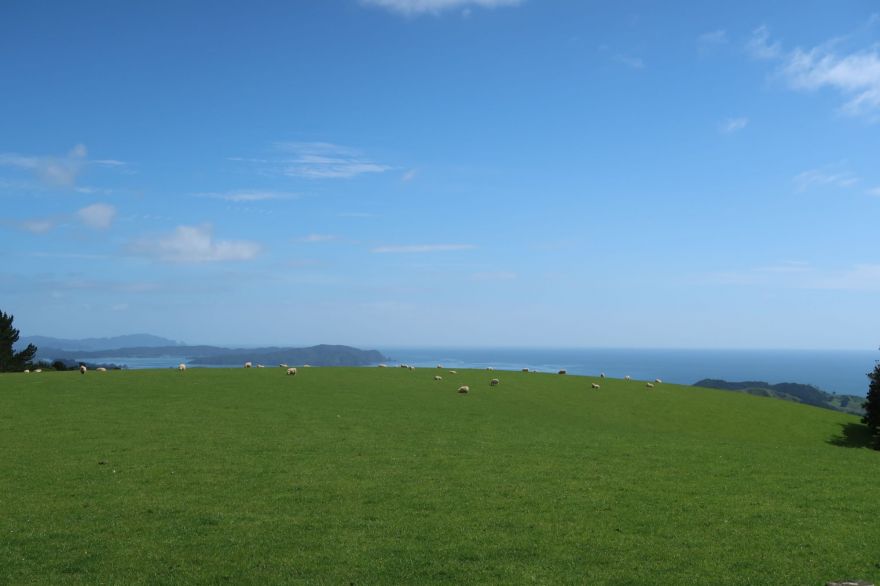 From the top of the Helena Ridge Track, we had to walk for about 1 kilometer over a gravel road to the start of the Morepork-Onekainga Track. This track started with a 4 kilometer long track that was in perfect conditions (recently upgraded). We literally flew through the forest, so nice to have such an easy going track once in a while. After about an hour, we arrived a signpost that stated it was another 6 kilometer to Whananaki. Considering the track we just did, we thought the following kilometer would take us about one-and-a-half hour. How wrong could we have been. Matter of fact, this has probably been the slowest 6 kilometers so far: the track was not as good as it used to be (understatement) and went steep up and down the hills. We had to cross 5 streams and by the time we thought that we should be out of the forest by now, we had climb up a very steep and long hill. But eventually, we emerged from the forest. However, worst has yet to come: just before Whananaki, the Te Araroa let us through a paddock with bulls. Luckily, all of the bulls were on the other side of the paddock. Luckily… As soon as we stepped into the paddock, they ran towards us. And we can tell you, seeing about 100 bulls running towards you is not the best sight you can have. Although scary, we continued our path through the paddock, with the bulls following us at about 10 meter. They must have lost interest in us, as they suddenly stopped following us. As soon as we noticed this, we increased our pace to make it out of the paddock as soon as possible. 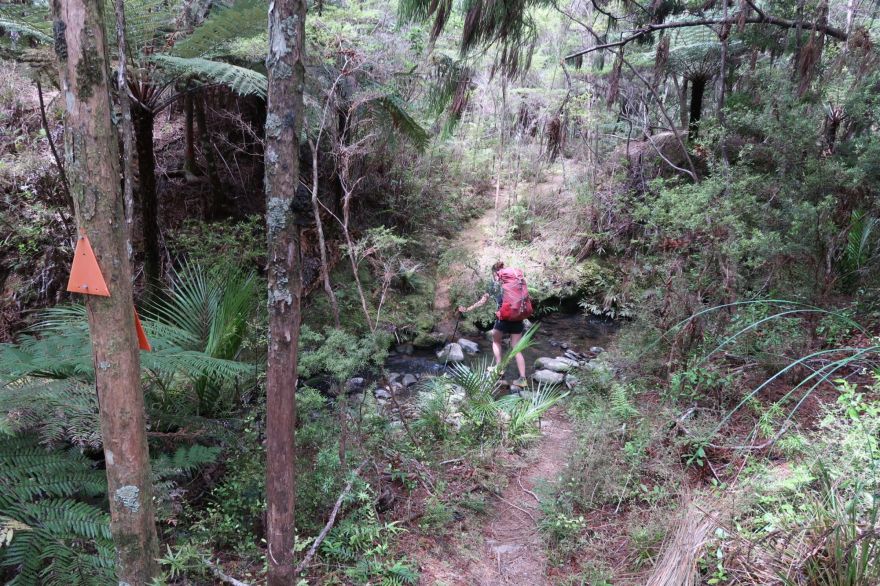 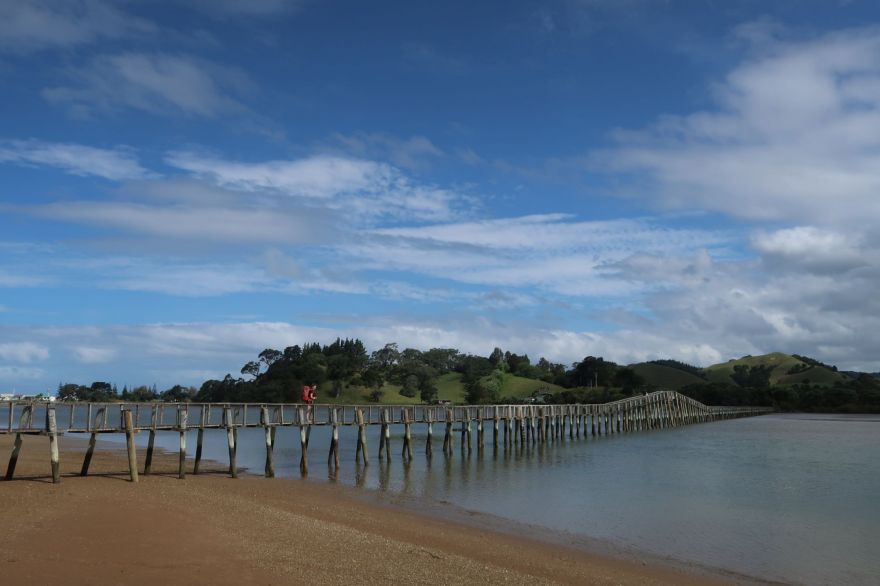 The final kilometers of the day were easy going. Before arriving in Whananaki, we first made a stop at the longest footbridge of the Southern Hemisphere. Second, we made a stop at the local Tip Top to buy some ice cream, well deserved if you ask us. Finally, it was time to set up our tent at the local Holiday Park. However, they offered us a cabin for the same price as a campsite. Hell yeah, we couldn’t resist to spend the night in a cabin.

The next day, the weather forecast wasn’t looking good. They predicted rain and severe thunderstorms. Rain is no problem, but hiking with thunderstorms is something different. However, when we were about to leave, it was by no mean raining as hard as predicted. This made us believe that the weather wasn’t as bad as forecasted. We therefore set of as normal. We crossed the longest footbridge of the Southern Hemisphere and followed a grassy coastal track. Eventually, this track turned away from the coast and started following a gravel road. Nothing special about this road, except for the fact that we soon discovered that there were cows standing in the middle of the road. While we waited to move so we could pass, we suddenly heard a lot of noise above us. Apparently a cow almost fell from a small ridge above us and was now hanging half over the ridge. Luckily she was able to climb back on the ridge before falling down. One scary moment though!

At about 9:30am, we arrived in Matapouri. Unfortunately, the take-away at the local Tip Top only opened at 11am. No burgers for us, instead just some pre-packaged pies. While enjoying our break, the light rain we had earlier this morning made place for more heavier rain. And in this rain, we continued to the start of the Matapouri Bush Track. Well, bush… They recently fell all trees. What was left was one big pile of mud and branches. Very difficult to walk through. Although the route was marked through this barren landscape, we noticed a sign at the end of forestry section which stated that the area was closed. Not sure how that worked, but we made it across.

The track continued through the forest. First over some grassy tracks, followed by some steep descending tracks. And everything that goes down, must come up at some point. And so did the track: after crossing a few streams, we followed the track up another hill. When we emerged from this forest, we only had a few more kilometers of tarmac before arriving in Ngunguru around 1:30pm. We did some shopping’s at the local Tip Top, and enjoyed a delicious burger at the take-away next door. Coincidently, we met James at the take-away. James has built a camping on the other side of the river and provides transports TA-hikers from Ngunguru. He normally works until 3pm, but today he was off early. Meaning he could pick us up anytime. After finishing our lunch, we walked to the river and sent James a message that we were ready for our pick-up. Within minutes we saw a small motorboat coming straight towards us. After wading through the water (it was low-tide), we stepped on board and James brought us in no-time to the other side. James his campsite is absolutely amazing: great facilities and an even better location. When it was getting dark, James even brought us marshmallows and lighted a big campfire. What a place! 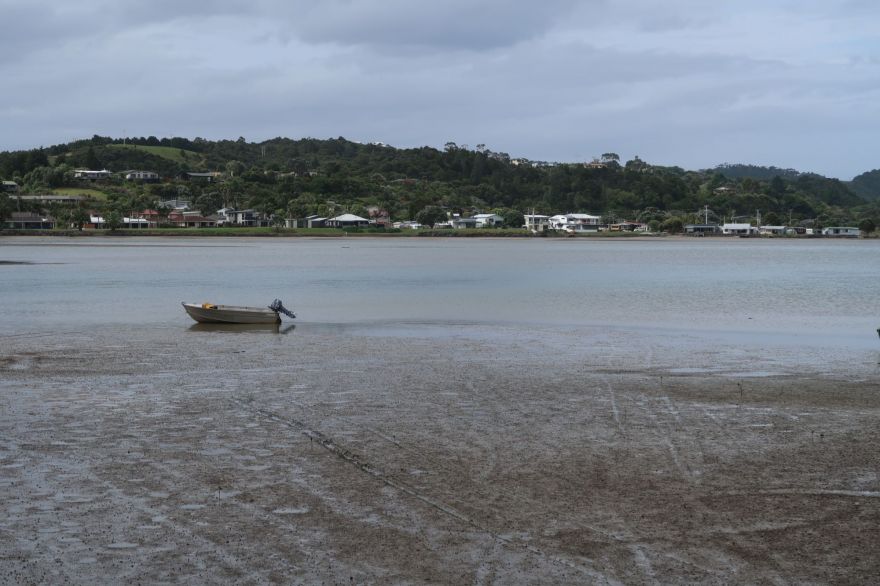 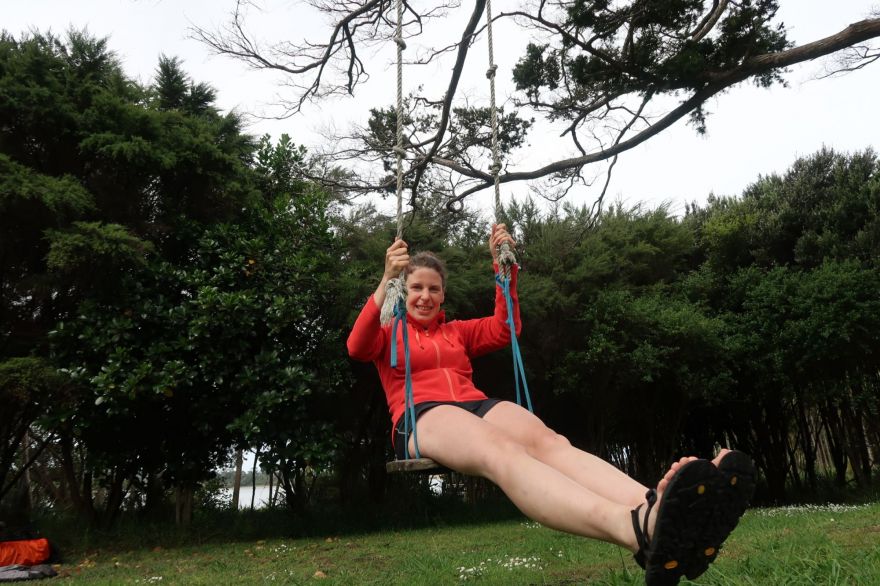 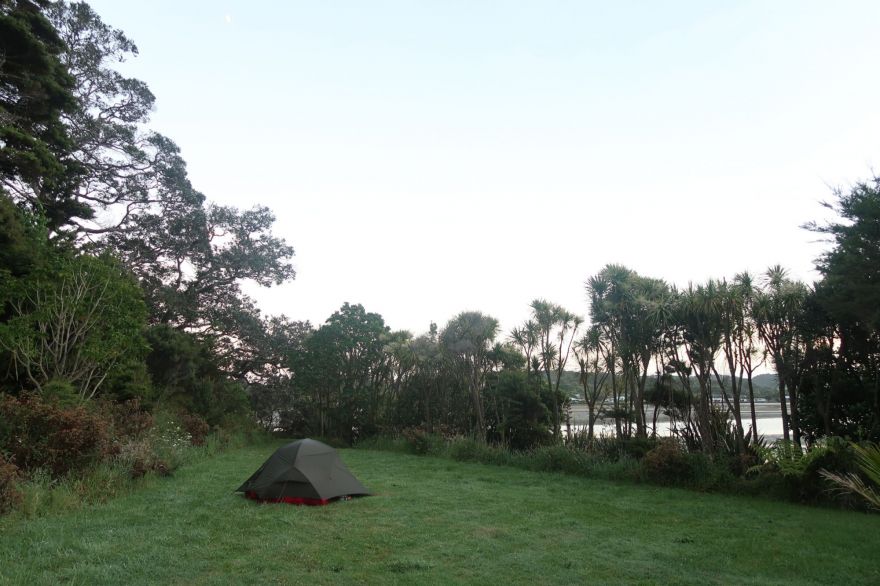 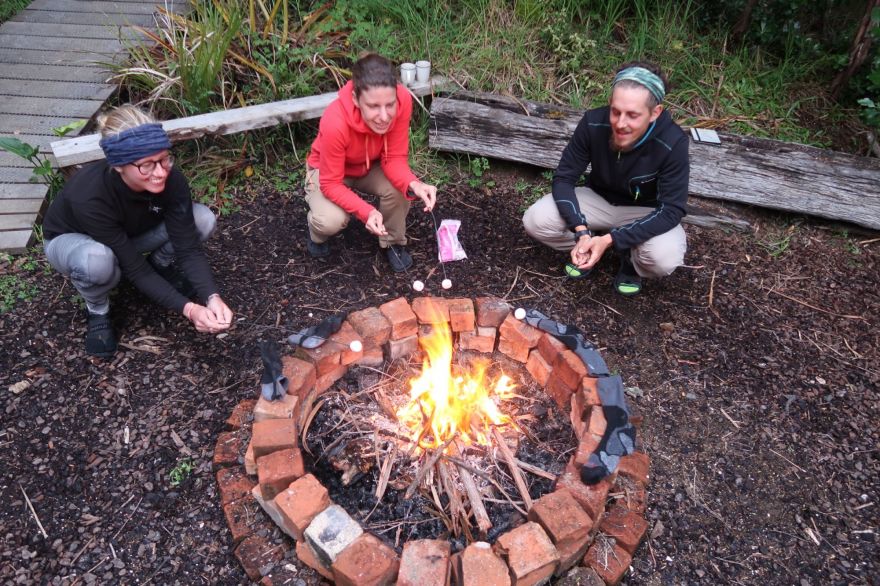