The night at Birchwood Station wasn’t what we expected. During the night, Jasper woke up to find a mouse sitting on his pillow. It took him a while to figure out it was not a dream, but reality: a mouse on his pillow. From that moment on, he didn’t sleep another second. Every sound he heard, he thought is were the mice that ruled the cabin.
After a sleepless night, we had to continue walking again. Unfortunately, the weather was terrible today. (*spoiler alert*) It would be the first day on the Te Araroa, that we would walk an entire day in pouring rain. We left Birchwood Station around 8am. After a short section of road walking, the Te Araroa turned right into a forest. However, there was forest work going on, with heavy machinery standing in the middle of the track. There was no way to pass. A deviation was not in place, so we searched for another route on our GPS ourselves. We crossed a station and followed a few farm roads to meet back up with the Te Araroa Trail. The poorly marked track led us through a paddock and up a steep hill. However, just right of the official track, we noticed a 4x4 track, which was much easier to walk. After a short but steep climb, we arrived at the 550 meter high Twinlaw top. By that time, we were dripping from both rain and sweat. Because of the poor weather, we had zero visibility. We couldn’t even see the top of the communication tower on top of Twinlaw.
We continued on wide forest roads. We had a good pace, until the road ended and we continued on a bush track. The track was covered in mud and roots, and offered us a good view how the Longwood Forests would look like. Hmmm… Three-and-a-half hours after leaving Birchwood Station, we exited the forest, this in contrast to the 8 hours that the DOC says you need for this section. 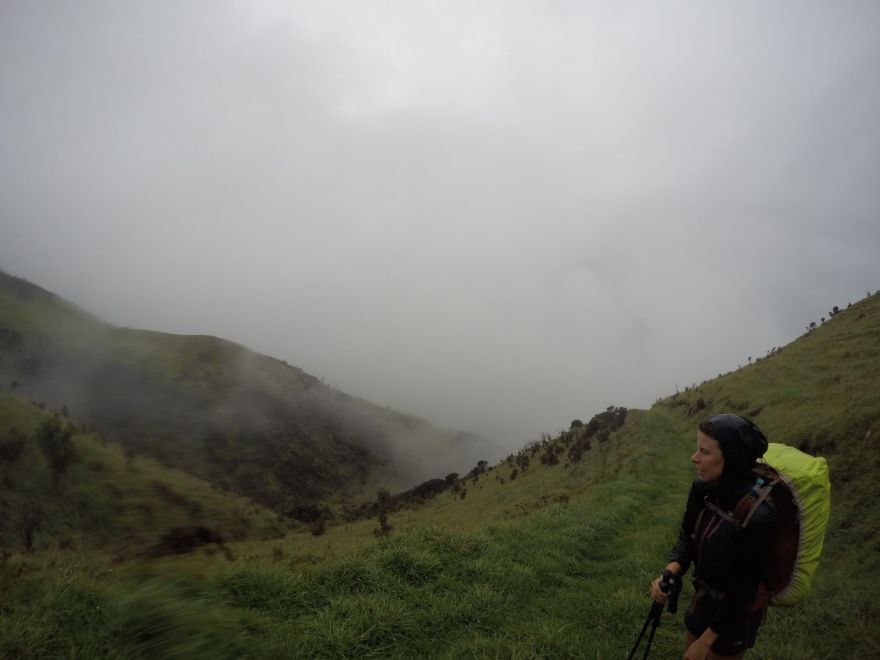 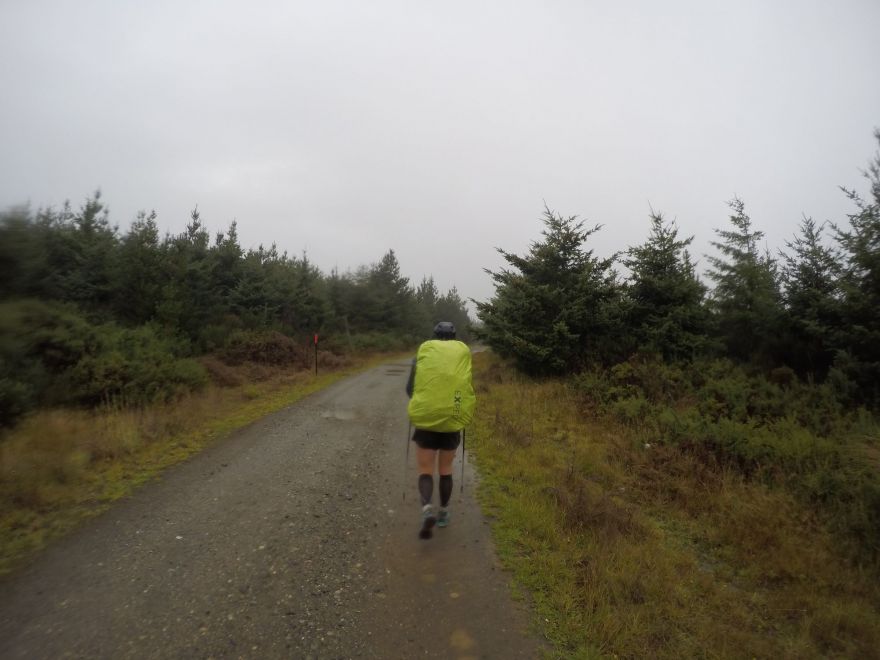 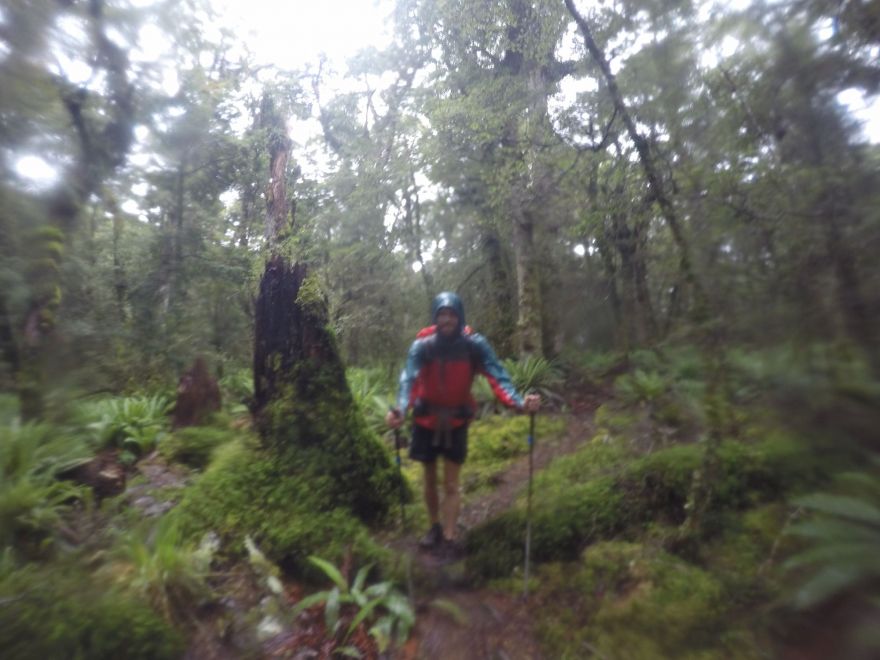 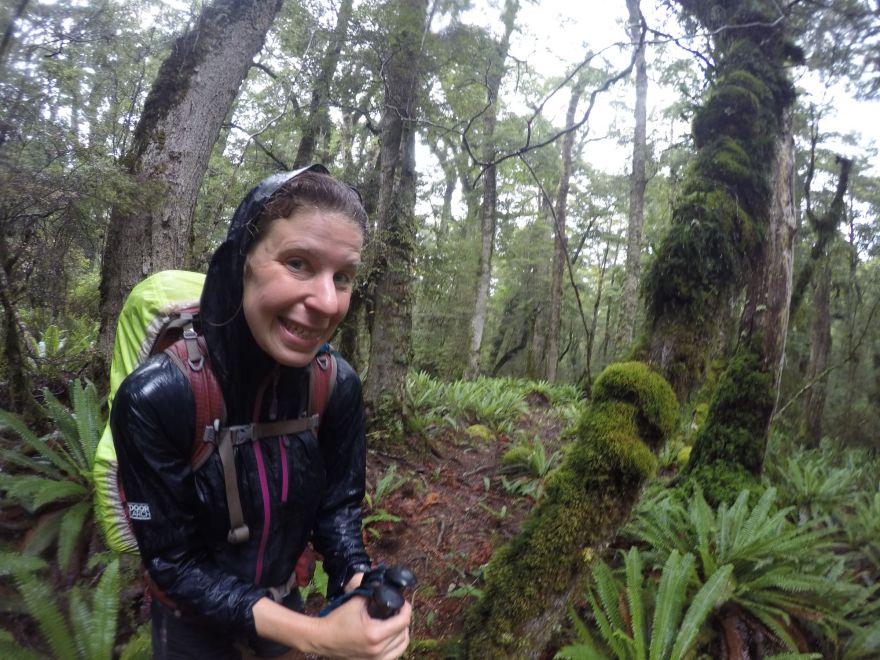 After the Woodlaw Forest, we continued on gravel roads to make the connection to the Island Bush Track. Where the track started on a nice gravel road, is suddenly disappeared in the dense forest without any markers. Great! The final kilometers of the day, we walked on an iron road again. A lot of big trucks drove by. Because the rain was still pouring down on us, it wasn’t particularly fun to walk on the side of the road. We were more than glad when we arrived at Meriview Hut. A hut built by a local farmer. When we arrived, we met two other hikers whom had taken a zero-day because of the shitty weather. Why didn’t we do that… 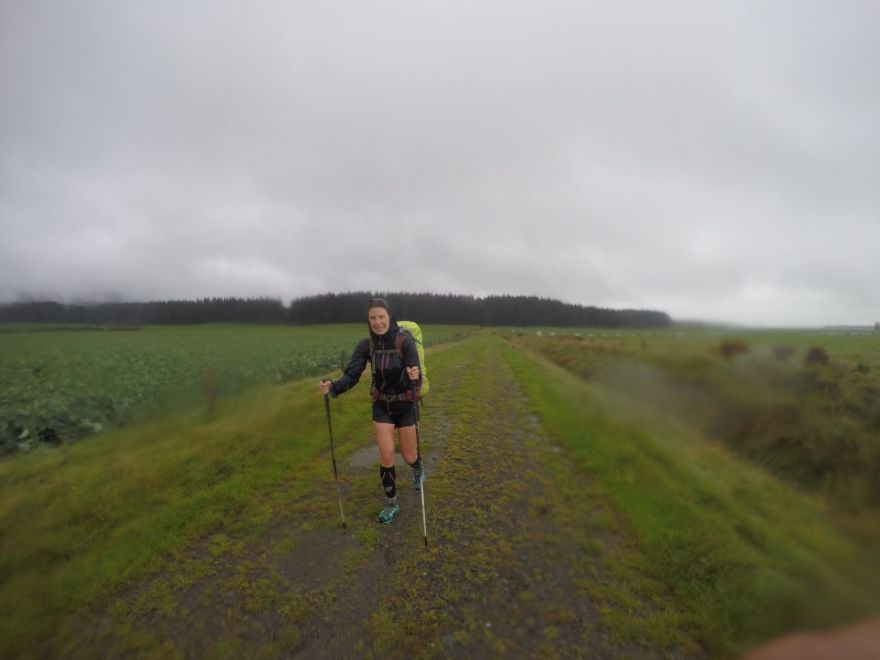 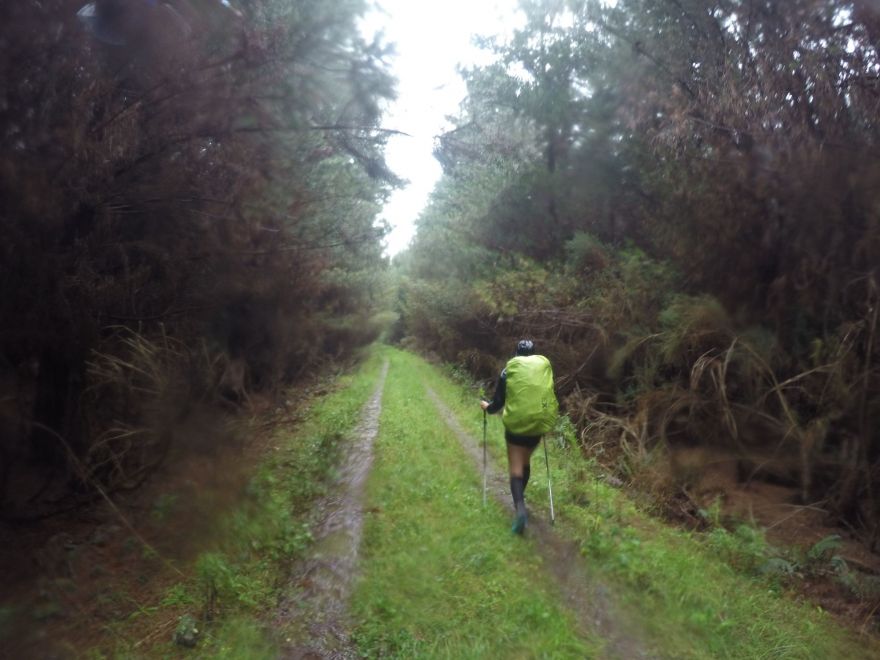 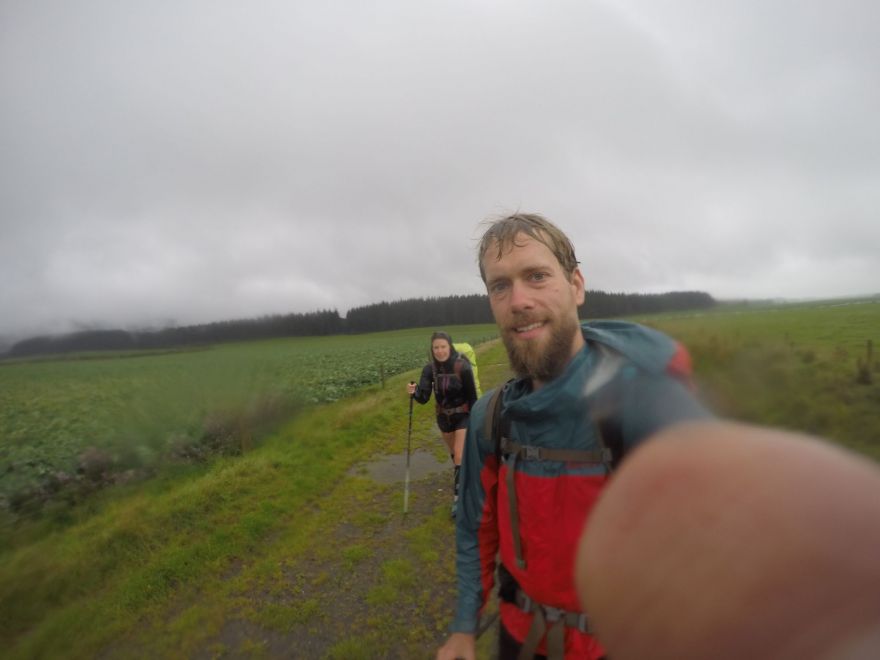 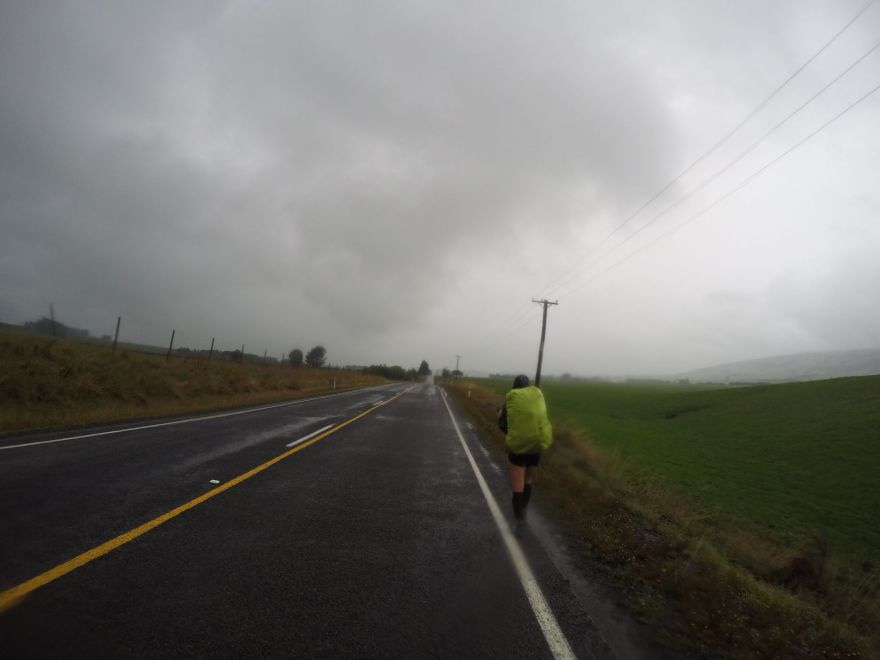 We have heard wild stories about the Longwood Forest. Some hikers even claim Longwood Forest is worse than Herekino Forest (that is quite a statement!). We started our day with not too much expectations. The first 7.5 kilometer, however, were easy going: on a gravel road that climbed up a hill. After almost 1.5 hour, the road ended and we continued on a track through dense bush onto Bald Hill. The forest we were hiking in was just a forest like any other: mud, tree roots and a lot of ups and downs. But nothing really terrible. We continued for about 1.5 hour before we arrived at an open area. In the distance, we could already see the communication tower at the top of Bald Hill. Half an hour later, we arrived at the top (805 meter). Right at that time, it started to rain. Well, snow actually. Wet snow. 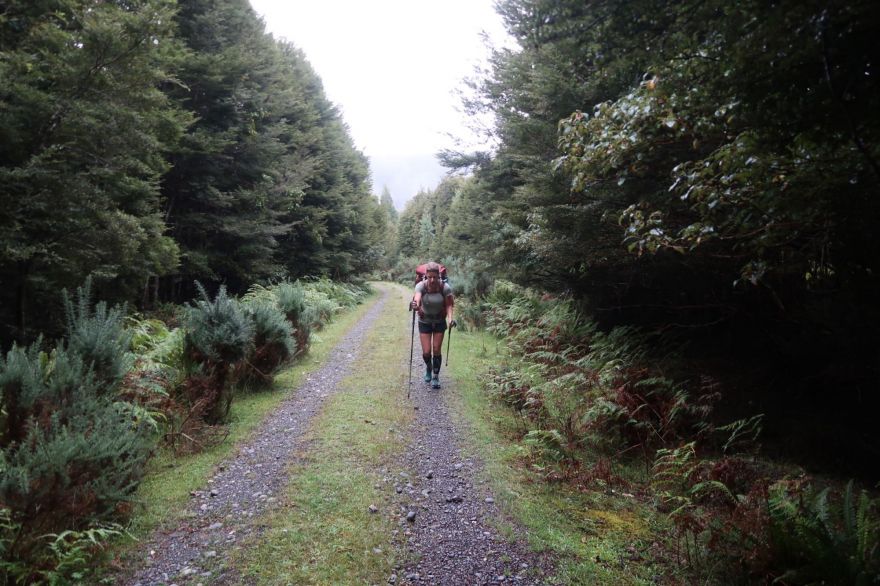 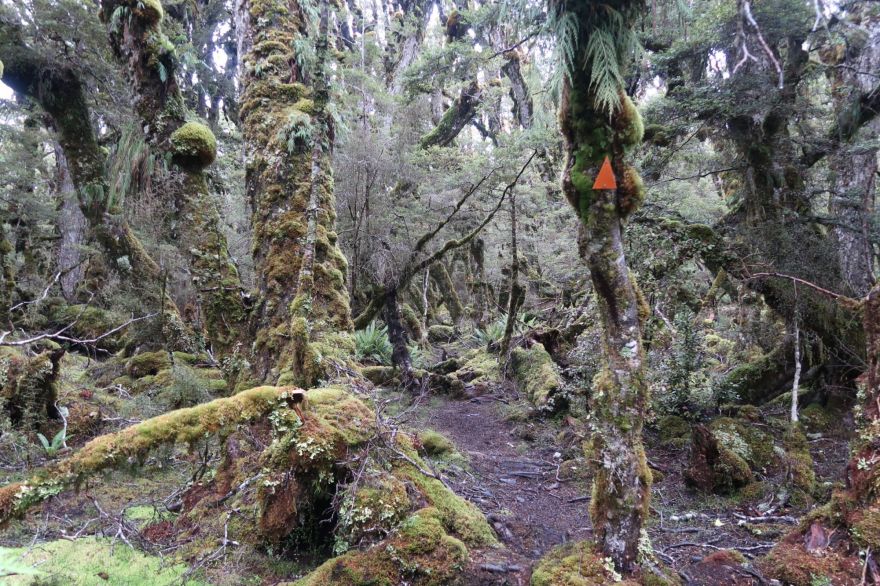 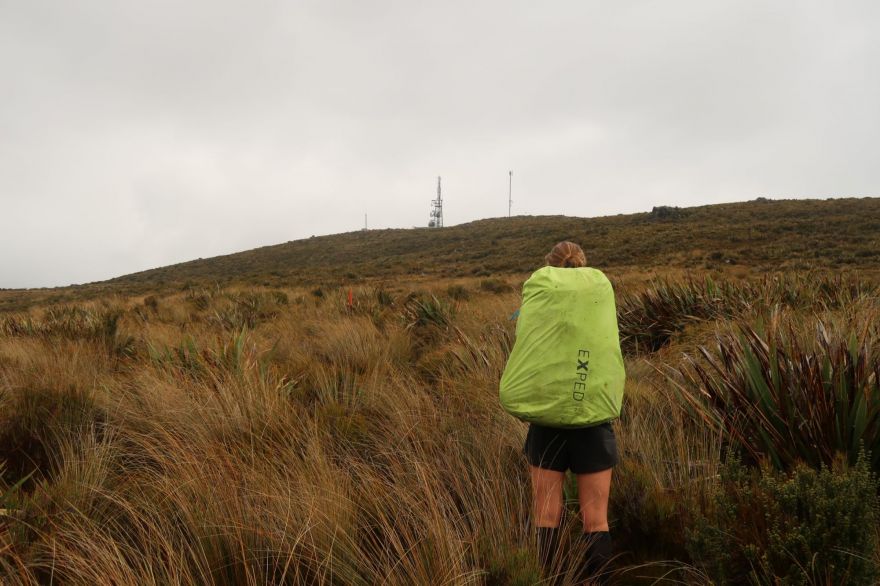 There was not much space to shelter from the snow and as soon as it stopped snowing, we quickly continued. By that time, we had gotten pretty cold and decided to run down the beautiful gravel road that led us off Bald Hill. We covered 4 kilometer in under half-an-hour. Wow! We arrived at the old quarry and decided we could do with a quick lunch. But as soon as we got our food out of our bags, it started to rain again. No! We packed and decided lunch could wait. We followed the track into the bush. We passed sections of deep mud. First we tried to avoid the deepest sections, but we soon found out that there was no escape from the mud. We found a large tree that provided a little shelter from the rain where we quickly ate our lunch. Shortly after, we left the forest behind and arrived on a large open clearing. We followed the wet track to the top at 764 meter. From there, the route turned left and descended to Martin’s Hut. We expected an awful descend, but is was actually rather ok. You just had to look carefully where to place your feet. We arrived at Martin’s Hut at 4:15pm. A lovely old cabin, and for the Te Araroa SOBO’s, also the last hut on the trail. 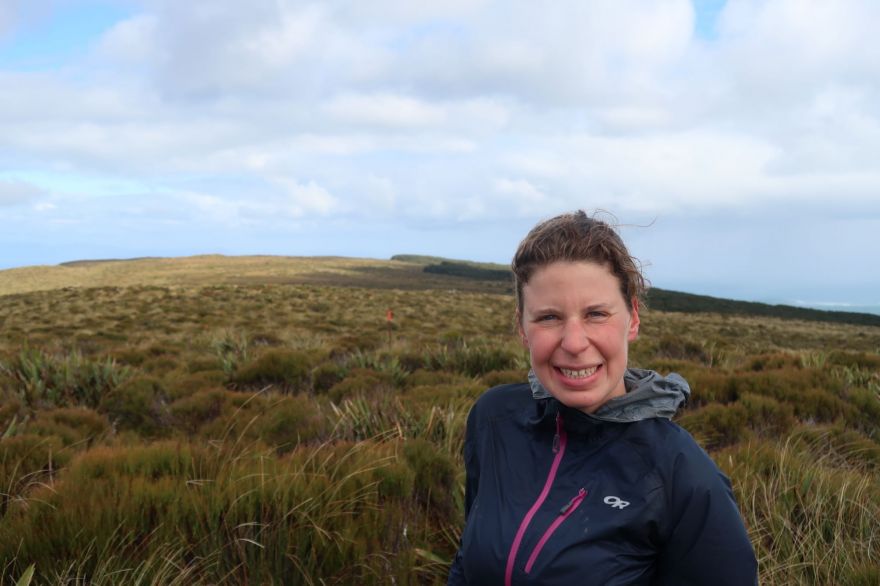 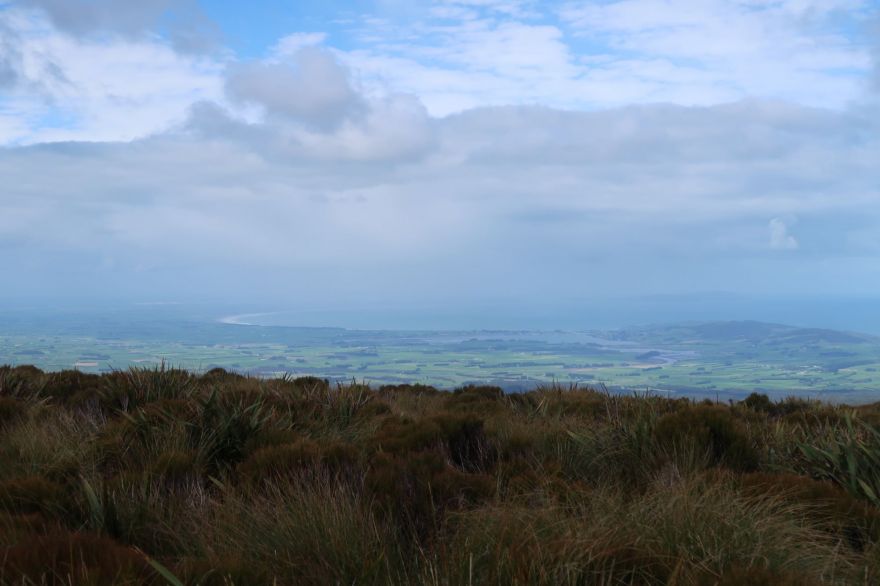 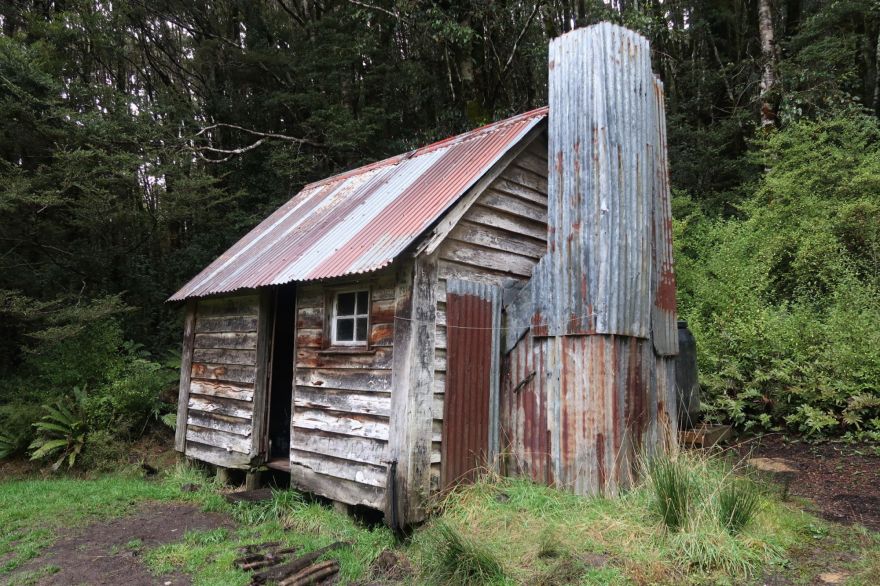 Around 11pm that night, we woke up by two German lads arriving at the hut. We heard them chatting outside, but soon they were shining with their flashlights through the windows of the hut. They tried to open the door, which was blocked by a stone that prevented the door from falling open. Isha, whom we shared the hut with, opened the door for them. They asked if there was a spare bunk available. As there was only one available, they decided to share the bunk. They then told they started their hike at 11am this morning. They had set-off for a popular two hour circular track. Somewhere, however, they must have taken a wrong turn and couldn’t find their way out of the forest. By pure luck, they stumbled upon Martin’s Hut. They didn’t have any gear nor food. Isha therefore quickly prepared a hot meal for them: couscous with salmon. But seeing their reactions, they didn’t really enjoy the food.
After a long night, we gave them our spare breakfast consisting of OSM and muesli bars. But also this didn’t really satisfy them. We asked them several times if they were sure to walk out of the forest with us or if they wanted us to notify the authorities. They were fine they said (they probably didn’t understand the situation they were in!). Eventually, we left Martin’s Hut at 8:20am. Isha stayed in the hut a little longer to document this story in the intentions book but would catch up with us later.

We followed a good track and quickly arrived at a gravel road. We followed this road until the Te Araroa Trail turned right onto Ports Water Race Track. Some had said that this would be a nice 4x4 track. Well, if this is a nice 4x4 track, then the gravel road we were walking on earlier today can be considered a highway made out of silk. We have also heard people saying that Ports Water Race Track is worse than Herekino, this might be more true. We followed the winding track through the forest and negotiated a lot of mud, roots, fallen trees, streams and ditches. Not really the ideal terrain to make a good pace, especially not if you are escorting two German lads. Remarkably, both Germans were able to keep up with us. We took a short break and gave the to German boys some of our snacks. They did seem to like our trailmix. During our break, Isha caught up with us. And with the five of us, we walked to the Mathieson Exit. 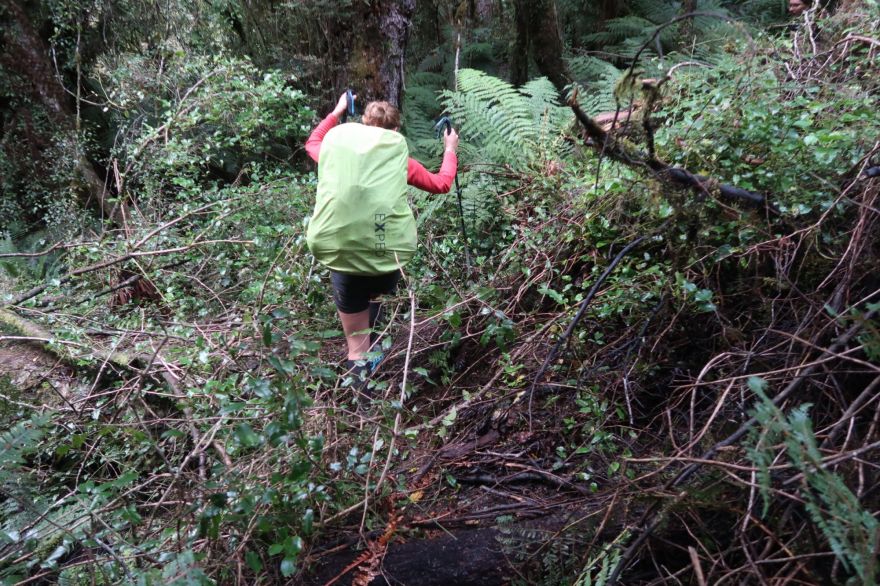 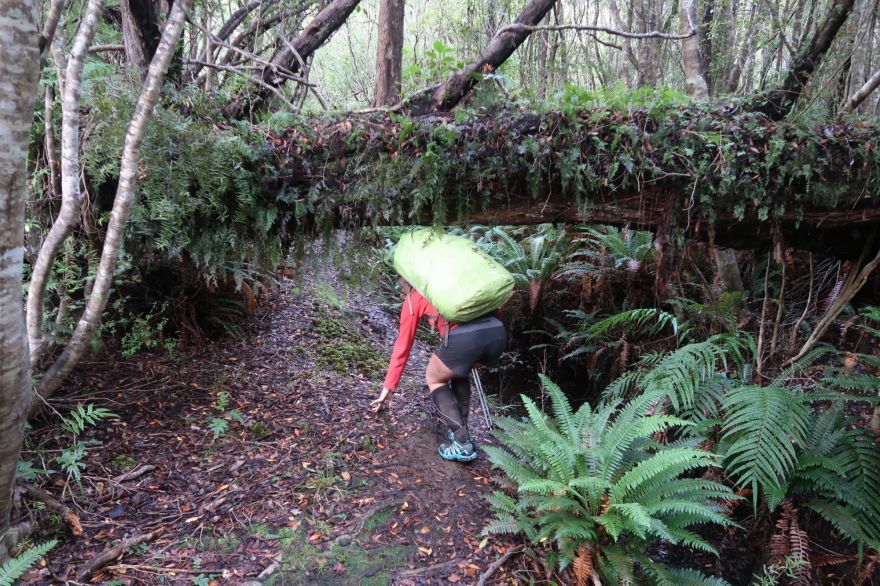 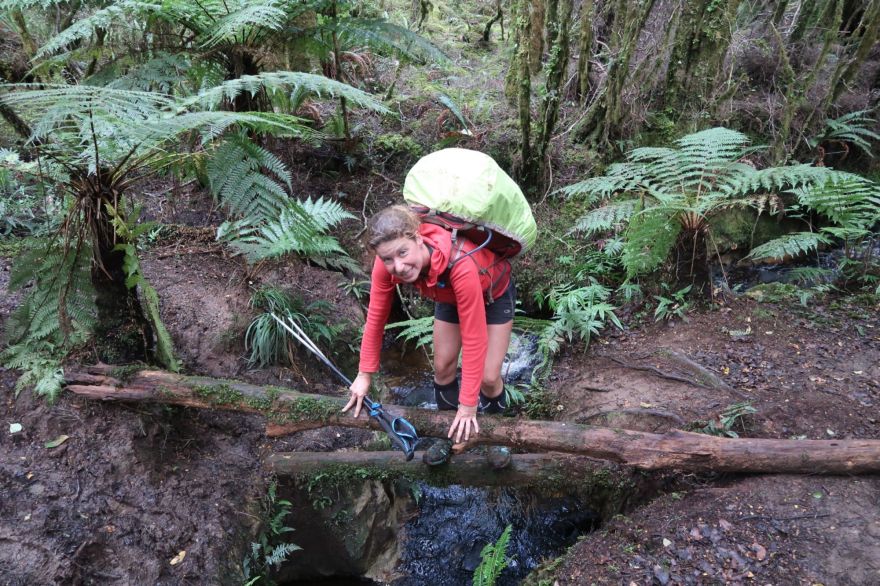 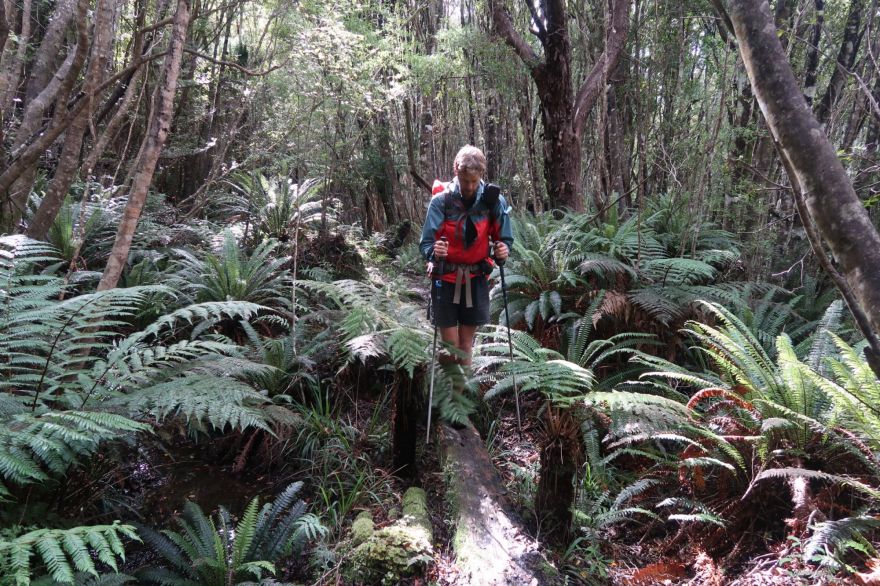 Officially, the Te Araroa Trail continued on Ports Water Race Track. However, by taking the Mathieson Exit, we know we will be out of the forest in minutes. Hopefully we can arrange a ride for two German boys back to their car.
Just minutes after turning left and leaving the trail behind, we exited the forest and arrived in a large paddock. We followed a farm track until we had to stop because a huge group of cows crossed the track ahead. Once all the cows had passed, we continued and arrived at the road towards Colac Bay. We literally jumped in front of the first car that approached us. Unfortunately, however, this farmer couldn’t help us. As this turned to be the only car we would see for some time, we continued walking. On this harder surface, the to Germans had more difficulty following our pace. Soon, we arrived at the junction towards Colac Bay. Turning left, we would be in Colac Bay. The two German boys had to turn right and walk another 3 kilometer to their car. We insisted them to come with us to Colac Bay and find someone that could bring them to their car. They refused and turned right. At this time, there wasn’t much more we could do. We turned left and started walking towards Colac Bay. It didn’t take long before we arrived in Colac Bay. While we were eating an ice cream at the Tavern / camping, the two Germans arrived. Even the bar tender asked if they were alright. Poor guys. They ordered the largest burger on the menu and enjoyed proper food. However, they still didn’t seem to understand the situation they were in. At least they have a good story now to tell their family. 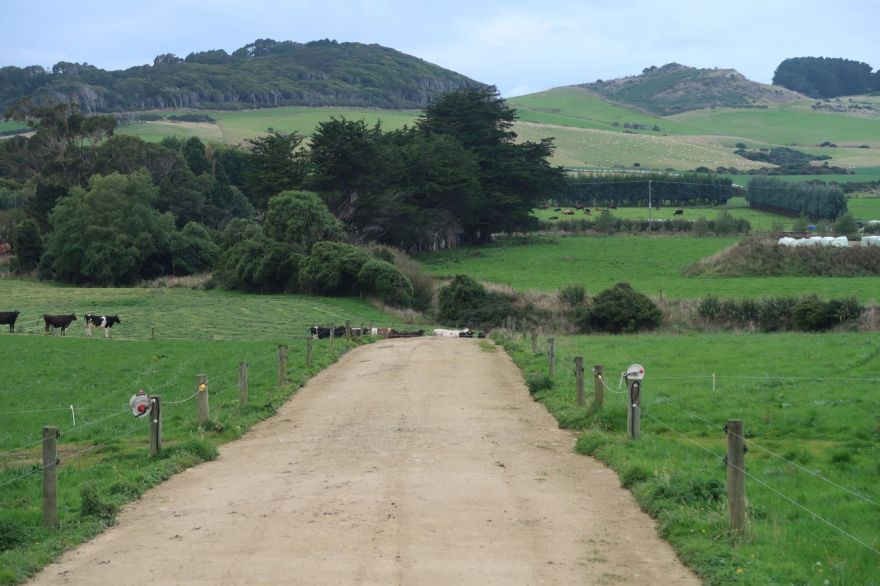 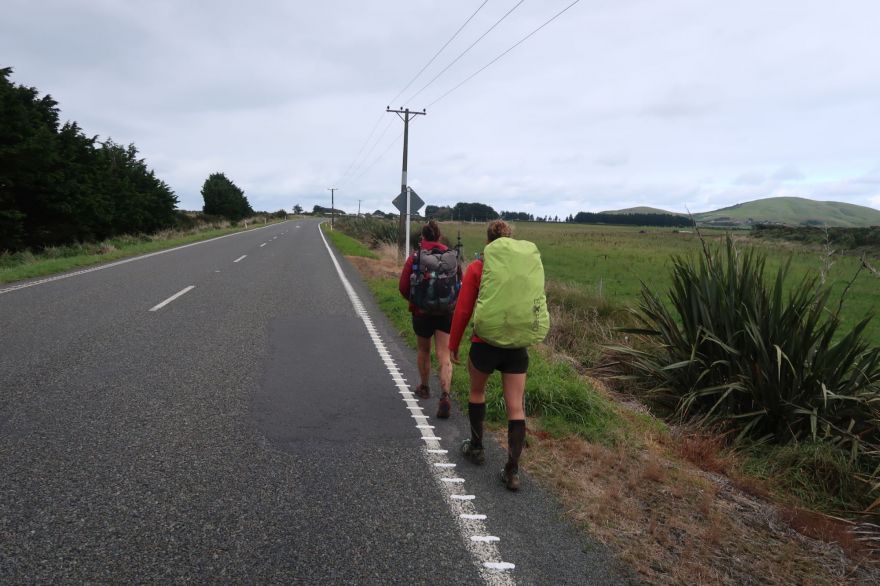