During the evening, we saw another developing thunder storm on the horizon. Again, we were able to watch the constant lightning while we only got light rain. The next morning, it was foggy. Meaning it was at times very hard to spot the next trail marker. We had to use the GPS to stay on course.

After crossing several fields, we entered a forest. At some points, the track was rather steep through dense Gorse. One of the most awful sections so far! A long and easy descend followd. The track crossed a closed off section where tree felling was in progress. Subsequently, we had to cross a number of paddocks. Some with large numbers of cows and bulls in them. Where possible, we walked around them, but sometimes we just had to walk right through the cows and bulls. The last few paddocks of the day were so steep that are achilles started to hurt.

Eventually, we arrived in Te Kuiti. A town we have been looking forward to arrive to. After we did some shoppig, we went to the Post Office to collect our parcel. When Jasper walked in to the office, he was asked if he was Jasper, he didn’t even had to say anything. They probably don’t get that many Te Araroa parcels in there. Minutes later, we were sitting outside, changing our old shoes for brand new shoes. While wearing our new shoes, we continued down south. We left Te Kuiti via an industrial area before arriving at the Mangaokewa Rivier. The track was covered by high grass and dense bush. We both suffered from hay fever. We planned to walk to a picnic area about 7 kilometers from Te Kuiti. However, a thunder storm was developing right above us. We tried to walk as fast as possible, but when it started to hammer down on us, we called it a day. After crossing a suspension bridge, we arrived at a DOC campsite where we set up our tent. 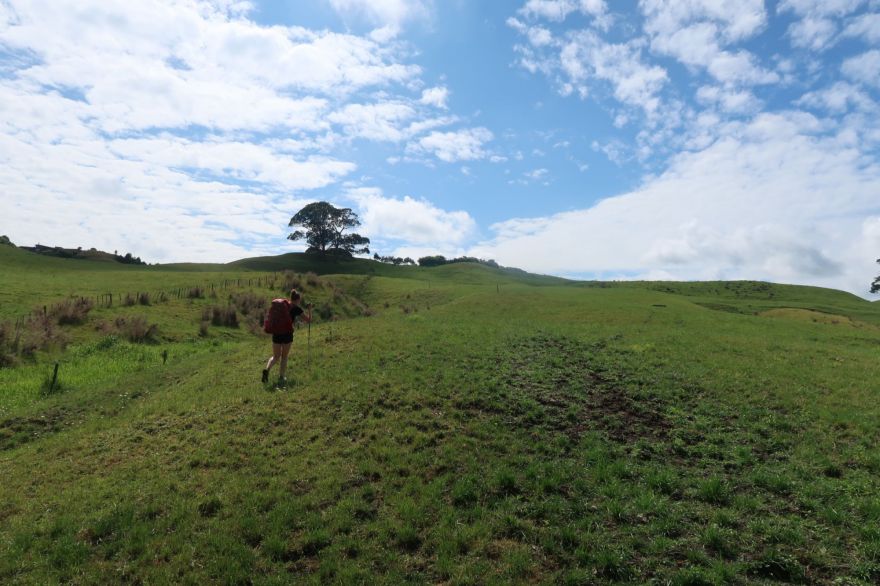 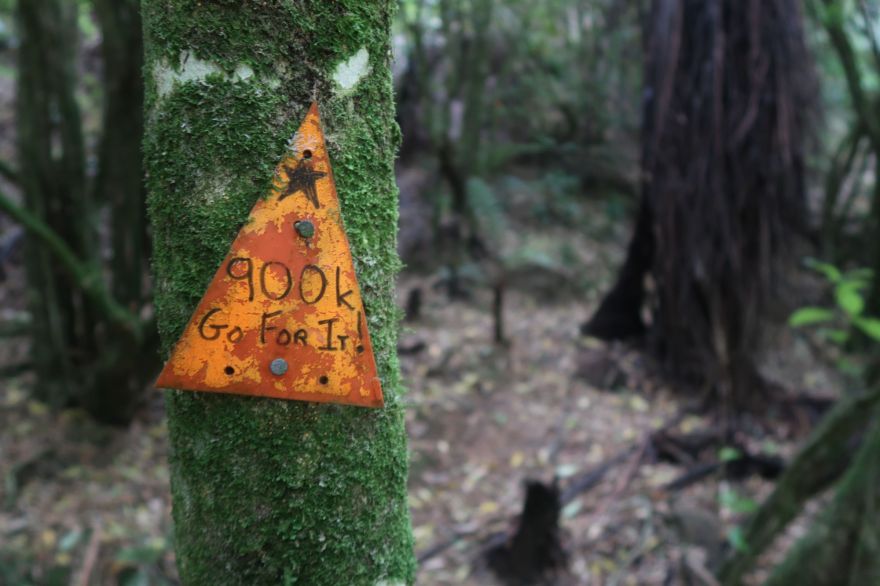 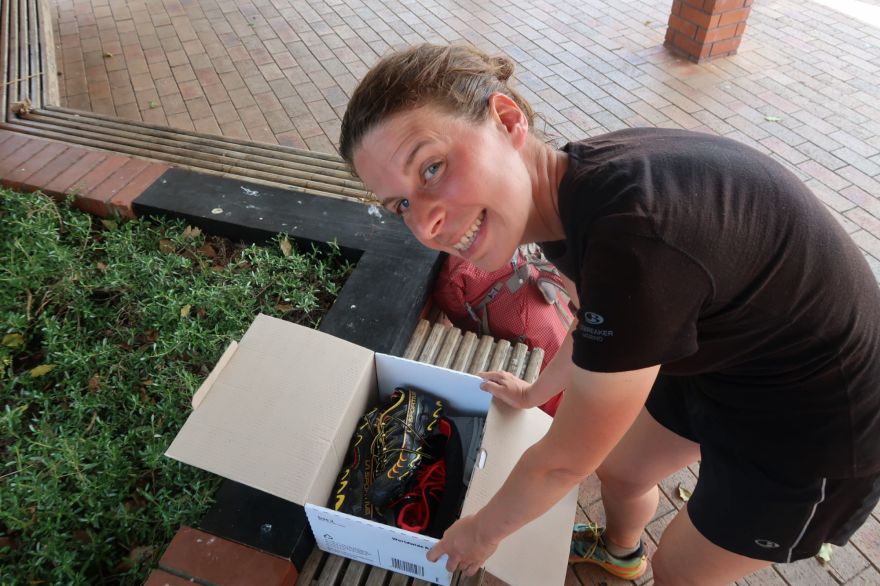 The hell of Te Araroa

On Friday, we aimed to walk the Mangaokewa Rivier Trail. Several hikers had already warned us for this section. They mentioned it was tough, an absolute nightmare and recommended we should avoid this section if possible. Looking back at it, these words can still be considered an understatement. Really, the track was awful. It started nicely, with 3 kilometers of easy going along to the picnic area where we planned to spend the night. But then…, the track was covered by high grass, meaning we couldn’t see where we placed our feet. The narrow track was covered by muddy holes we couldn’t see because of the grass. If we stepped in one of these holes, we risked of falling in the river on the left of us. The only way to stop a fall into the river, was by grapping thorny bush on the right of the track.
We came across a stream that cut right trough the track. We had to scramble down and climb up steep rocks. We both fell once, but hearing other hikers we spoke to today, some fell ten times. Everybody complained about this section. And they have all right to do so. As mentioned, it was a horrible trail. Having said that: our brand new shoes were not so shiny anymore after one day in the mud :( 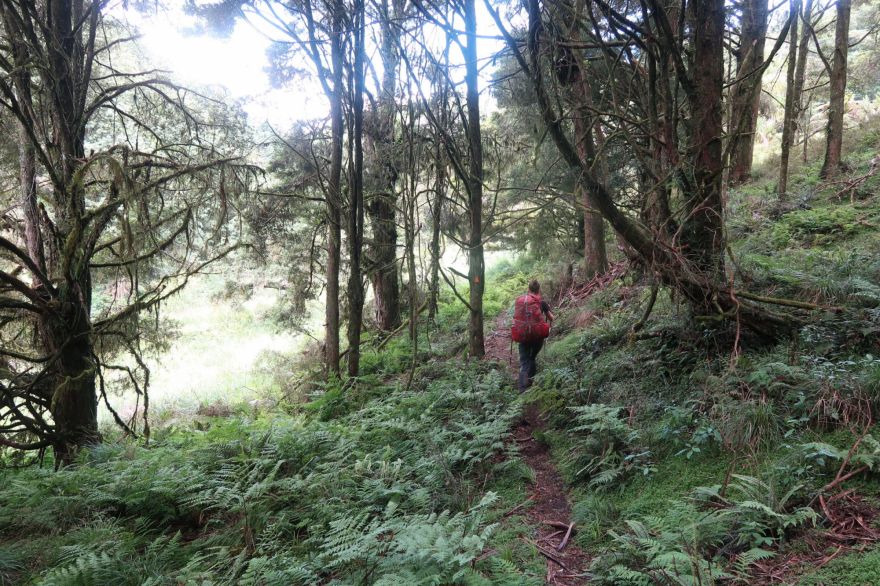 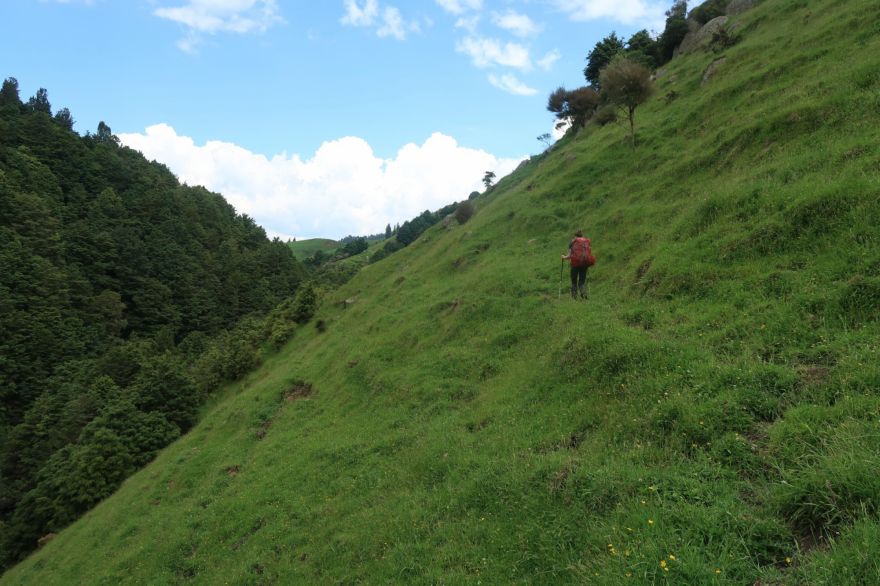 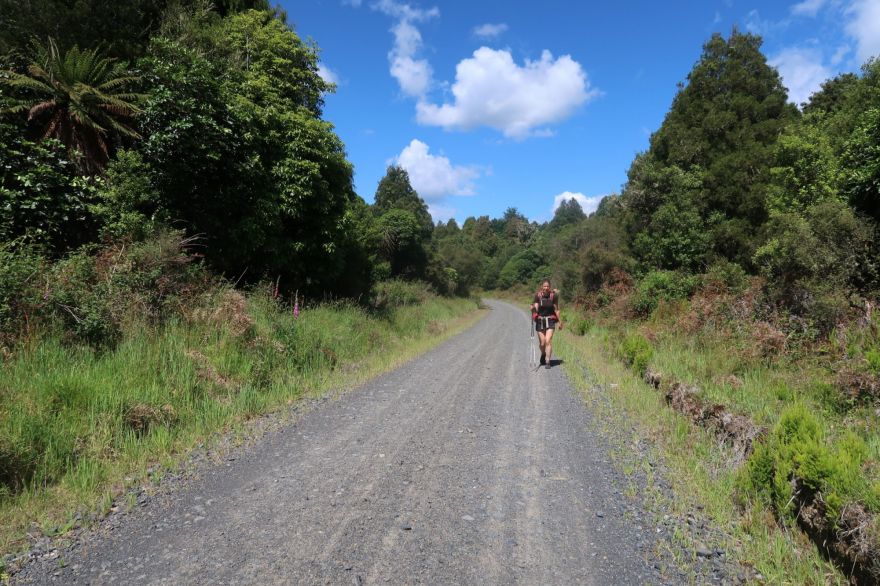 The Timber Trail is 84 kilometer long and weaves its way through ancient forest, across ancestral lands of local Maori Tribes, and along part of the historic Ongarue Tramway. The cycle and walkway follows tracks used by trucks and trams on the flank of Pureora and through the pureora Forest.
From the Ngaherenge Campsite, at the start of the Timber Trail, the track goes up. But on this lovely trail, this is barely noticeable. Just below Pureora Summit, we got a bit confused. Last year, the Te Araroa Trail climbed to the summit. However the Department of Conservation has closed the summit track and given the track back to nature. There were still markers that pointed in the direction of the closed summit route. We followed the Timber Trail and reached a height of 970 meter. Once we reached the highest point, the route was easy going downhill from there. We almost started running on this wide track. The scenery was breathtaking: with deep valleys and several bridges, including several suspension bridges.

While continueing our way through the forest, we heard the sound of an engine. Soon, we saw a buggy driving our way. The buggy stopped and we made a chat with four hunters. Before we even realized, we were offered beer. With the sky high temperatures, a cold drink was welcomed with great joy.

After about 35.5 kilometer, we arrived at a campsite under construction. We could distinct three sites, all with their own fireplace. We choose one besides a stream. 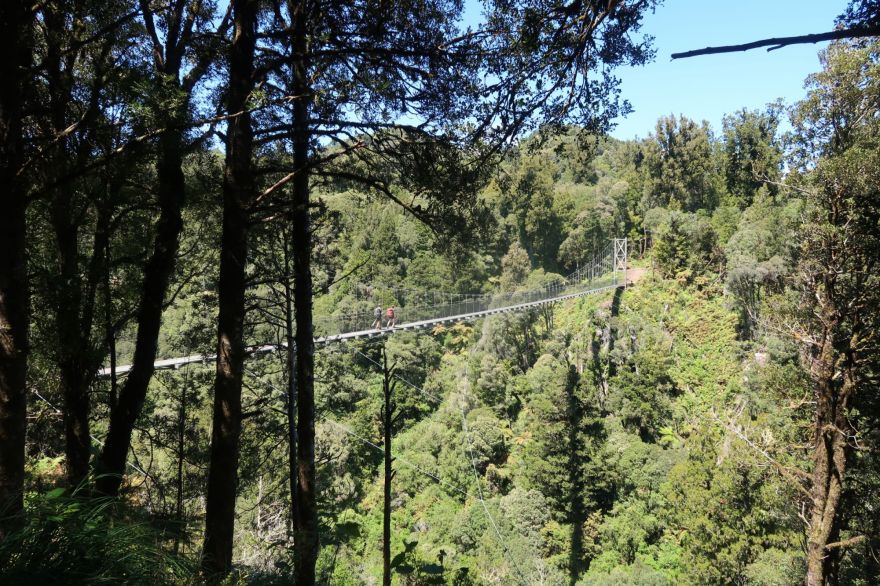 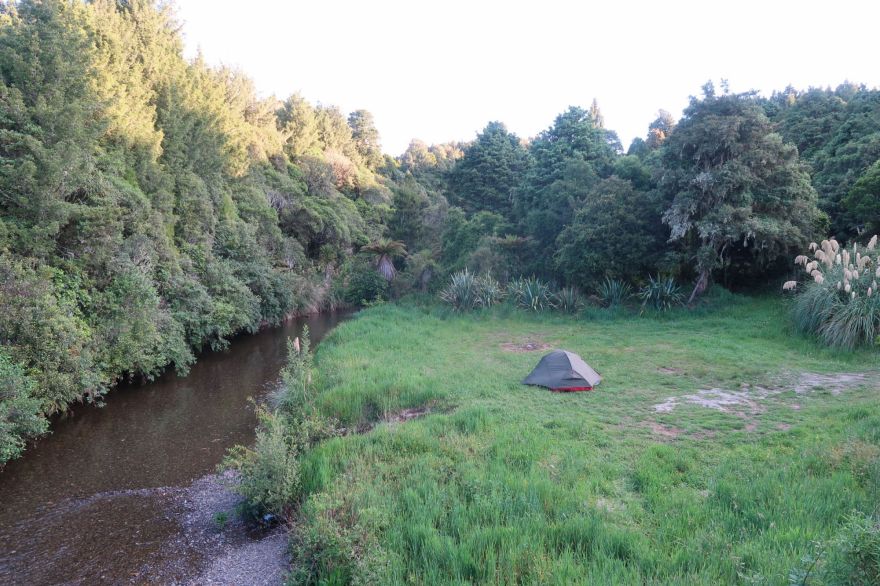 On Monday, we continued our way on the Timber Trail. We followed former tram lines, meaning we were walking on a wide track with an easy grade. We came across a 140 meter long suspension bridge, the longest suspension bridge built by the DOC. Although we planned to walk 36 kilometers, we questioned ourselves why we were pushing it. We have plenty of time, we are enjoying the scenery, so why not take it easy? And that is what we did. After 30 kilometers, we made camp next to a former miners camp. 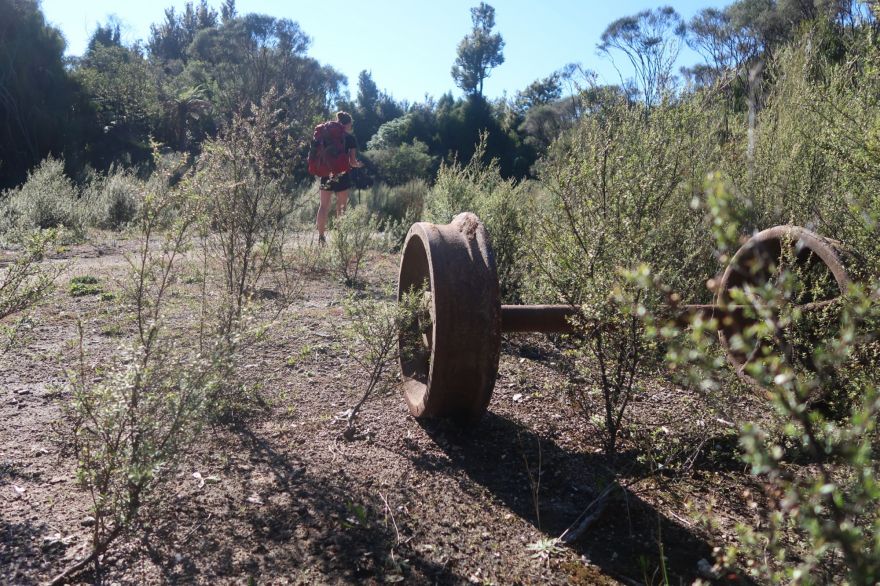 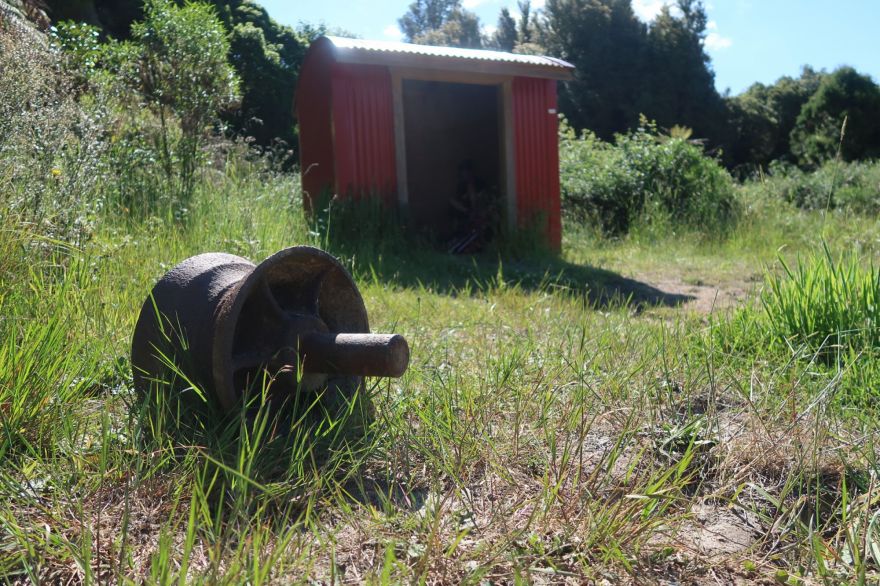 Today, was an easy day. We only had to cover another 20 or so kilometers. Again, we followed the former tram line. We crossed more bridges and read about the Timber Trail on information signs along the track. We walked through a spiral tunnel, the only spiral tunnel in the world constructed for forestry work.

Around 11am, we arrived at the recently built shelter at the terminus of the Timber Trail. While we were enjoying a bit of shade, a man approached us and offered us apples, bananas, lettuce, cheese and sausages. Wow! He surely knows what a hiker needs! 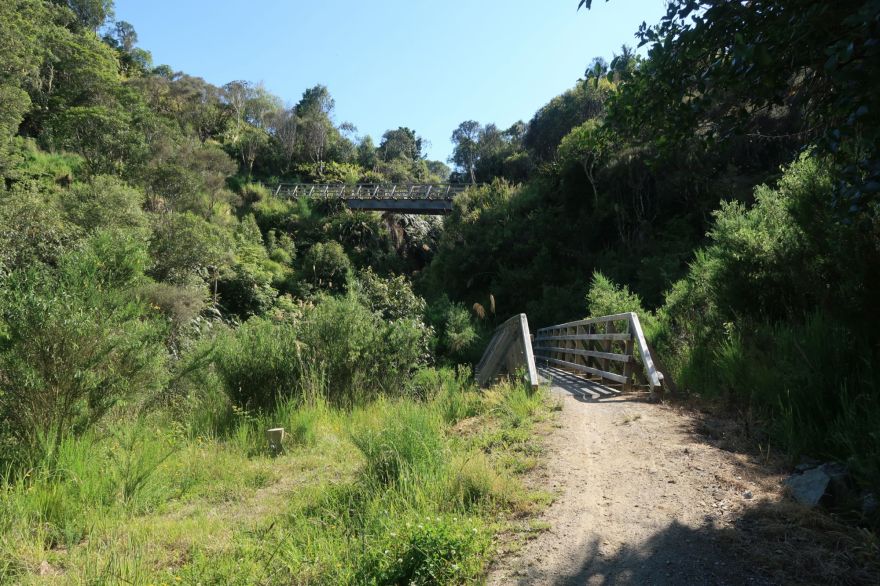 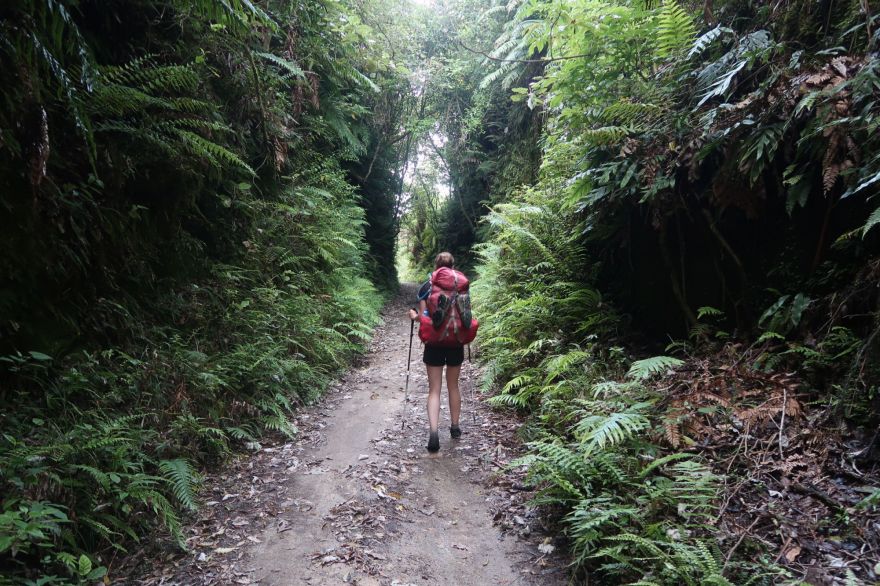 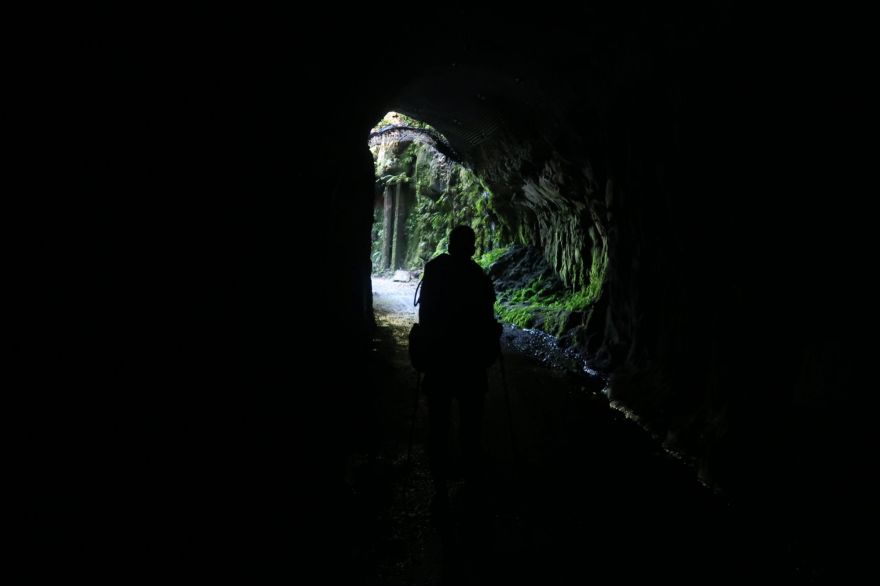