Etosha National Park is one of the reasons why you should visit Namibia. The characteristic Etosha Pan (which can be seen from space!), the abundant wildlife and the possibility to drive around in your own sedan, make it one of the most accessible and unique game parks in southern Africa. This blog will provide all information you need to visit Etosha National Park. 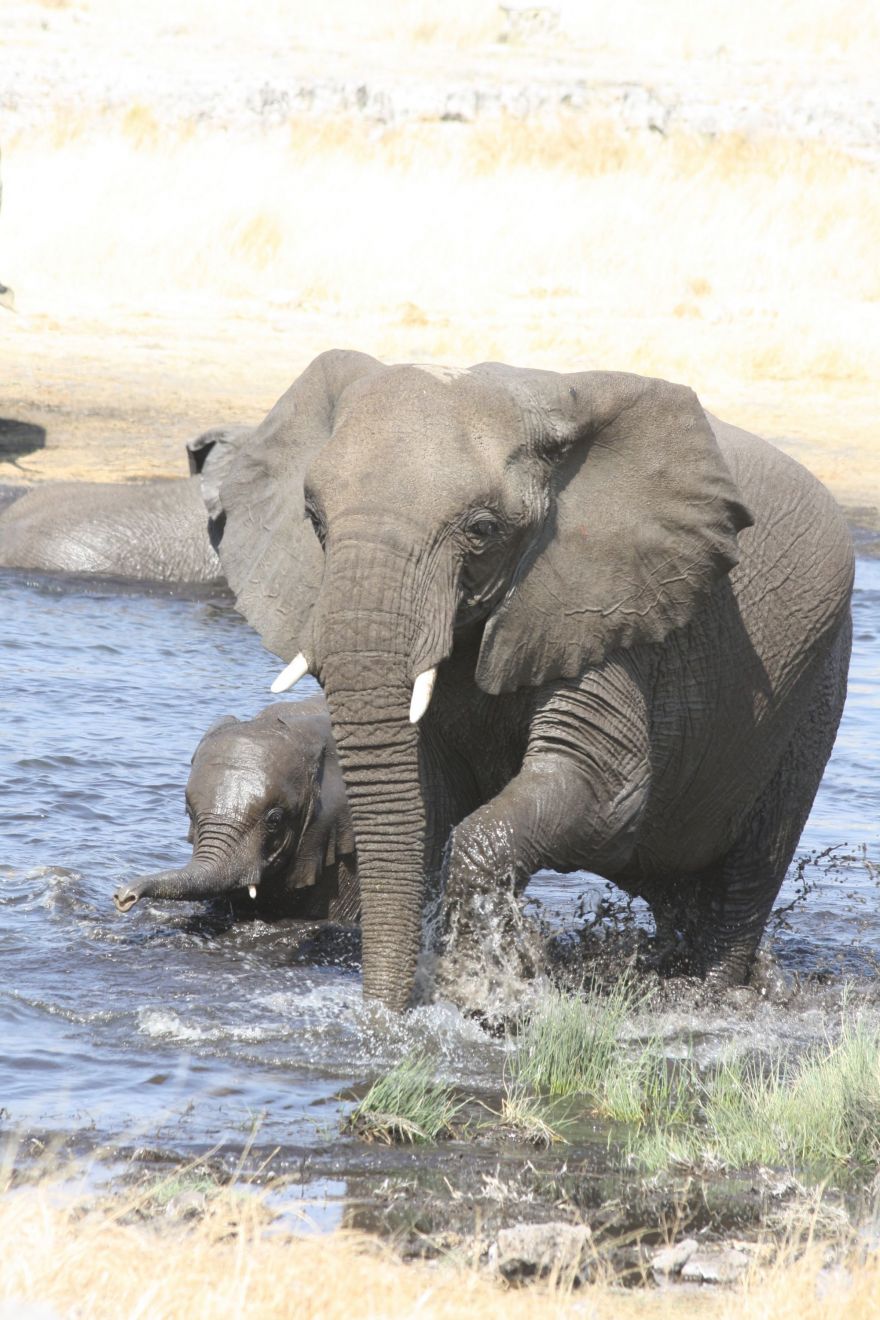 How to get to Etosha National Park

If you have enough money, you can fly-in to Etosha National Park. However, most visitor will arrive by car. There are four gates to Etosha National Park: Galton Gate in the west, Anderson’s Gate near Okaukuejo, Von Lindequist Gate near Namutoni and King Nehale Lya Mpingana Gate in the north. Most visitors travel between the Anderson’s Gate (Okaukuejo) and the Von Lindequist Gate (Namutoni).

From Windhoek to the Anderson's Gate is 435 kilometer, or a 4 hours drive. To the Von Lindequist Gate is 533 kilometer or a 5 hour drive. Note that the entrance to Etosha National Park is only permitted during day-time hours. If you want to spend the night in Etosha National Park, you should have passed the gate before sunset.

Etosha National Park is an ideal game park for a self-drive with your own (rental)car. The roads between the Anderson’s Gate (Okaukuejo) and Von Lindequist Gate (Namutoni) are generally in good driving conditions. Considering the road conditions, a 4wd is not really necessary. Because of the sometimes high bushes, a 4wd is by some preferred as it is easier to spot wildlife from a 4wd than a 2wd car. The roads in the north and in the west are less travelled and therefore also in a worse shape. However, they are still perfectly fine to drive in a 2wd car. Yet, when travelling further north or west from the Galton Gate or the King Nehale Lya Mpingana Gate, a 4wd car is definitely required.

All camps in and outside Etosha National Park also offer guided game drives (which are always in a 4wd). 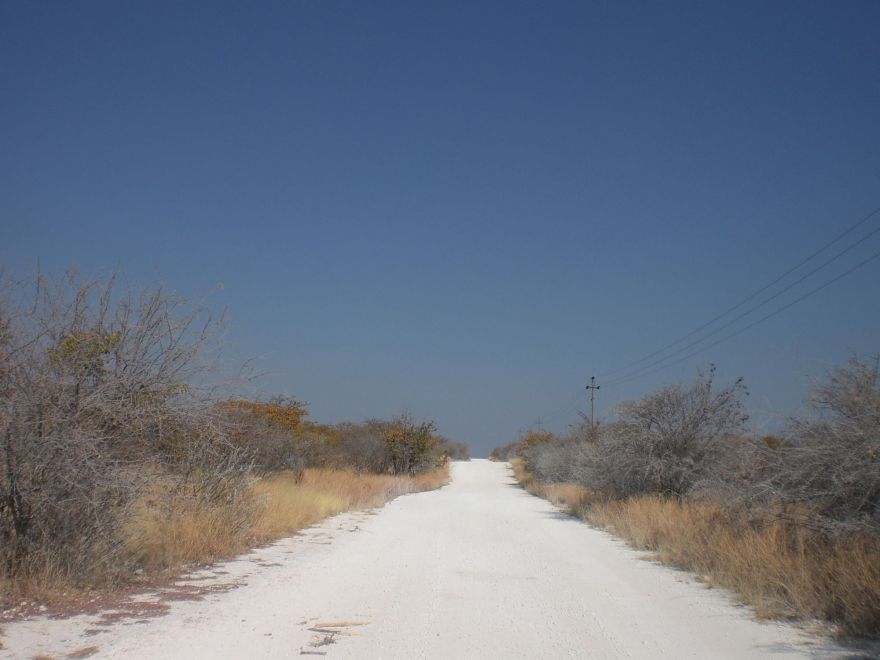 The is a wide range of lodges located just outside Etosha National Park. From these lodges, you can make day-trips (e.g. guided game drives) into the park. However, it is much better to actually stay inside the park. There are six camps inside the park: Namutoni, Halali and Okaukuejo are the oldest and most important camps in the park. These camps offer accommodation (chalets), campsites, restaurant, shop and petrol station. Rates range from N$ 620 in low-season and N$ 920 in high-season for a chalet and N$ 220 for a campsite year-round.

Recently, three new camps have opened in Etosha National park: Onkoshi, Olifantsrus and Dolomite. Onkoshi is located in the north east (north of Namutoni). All fifteen chalets have an amazing view on the Etosha Pan. Rates range from N$ 1500 in low-season to N$ 2100 in high-season.

Olifantsrus is a campsite only. It is located between Okaukuejo and Dolomite, built at the site where 525 elephants were slaughtered between 1983 and 1985. Rates are around N$ 250 per night. One amazing facility at Olifantsrus is the wildlife deck. They have built it right at the edge of the waterhole. Therefore, you will be very close to the animals. Yet, one downside of this is that you are looking at the animals through glass, which is not really ideal for photography.

In the west, in an area that was until recently closed off for visitors, lays Dolomite. Twenty chalets have been built on a hill, providing an amazing view over the countryside. Rates range from N$ 1300 in low-season to N$ 1620 in high-season.

What to do in Etosha National Park

You will visit Etosha National Park to see wildlife. Wherever you are in the park, it is almost a guarantee that you will see abundant wildlife. Depending on the time of the year and where you are in the park, you will likely see different animals. The landscape of Etosha National Park is characterized by the open grass-plains in the north-east, the forest in the south, the Etosha Pan in the middle and north and the open, grassy areas in the west. According to locals, wildlife migrates from the forest to the open grass-plains during the rainy season. However, it is apparent, that not all animals obey to this. But the more fun it is to drive around Etosha National Park, looking for wildlife. To make it easier to sight wildlife, a variety of waterholes are located throughout the park (both natural and man-made waterholes). Animals tend to come to these waterholes to drink, making it an easy spot to see animals. We have documented the waterholes where we have had great successes in the past (but that doesn't mean it is guaranteed you will see animals there): 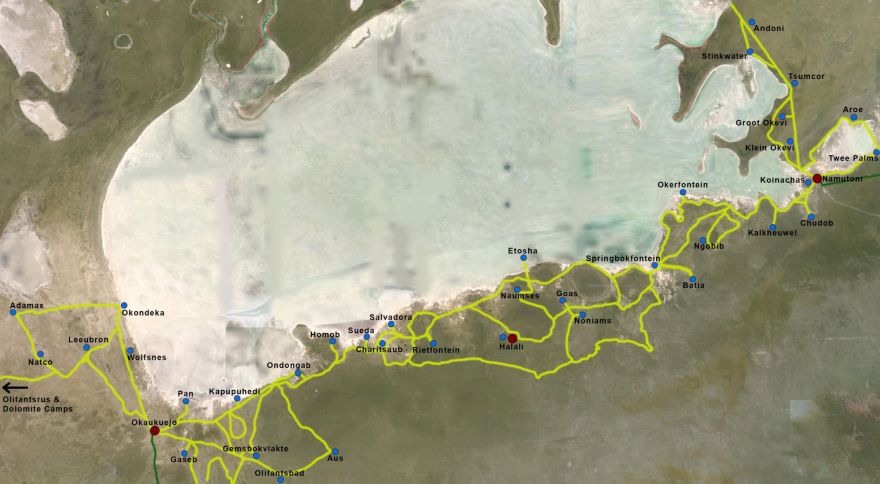 Andoni: Until recently, Andoni was the most northern point you could reach in Etosha National Park and wasn't really worth the long drive as we have never seen abundant wildlife there. Only zebra and other relative small game.

Aroe en Twee Palms: This large open grass-plain just outside Namutoni is an ideal location to spot wildebeest and ostriches. We have never seen any other wildlife here. 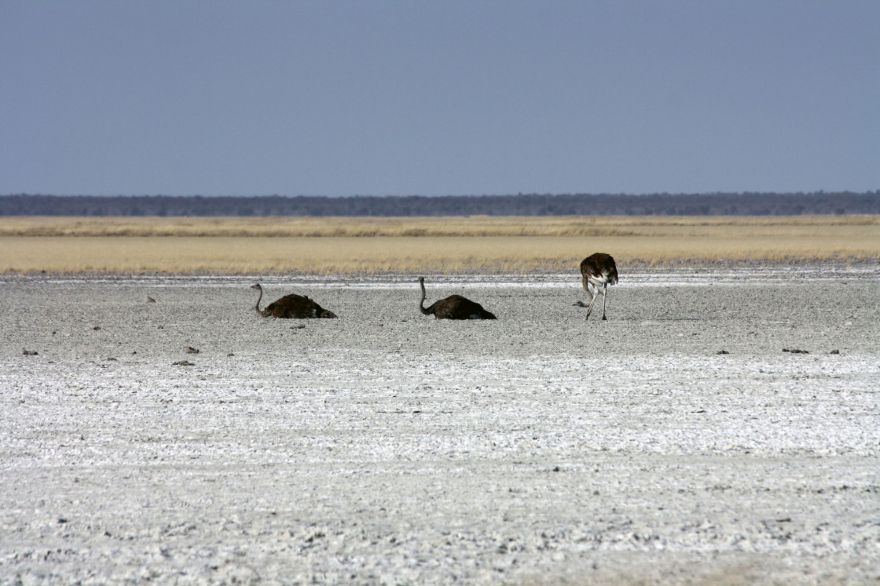 Charitsaub: A large and open grass-plain that is known for its abundant population of gemsbok, springbok and wildebeest. We have even seen a lion here once.

Chudob: An open area at a natural waterhole attracts a large amount of game. Every single time we have been in Etosha, we saw many zebra's, giraffe, gemsbok, springbok, and other animals walking around the waterhole. 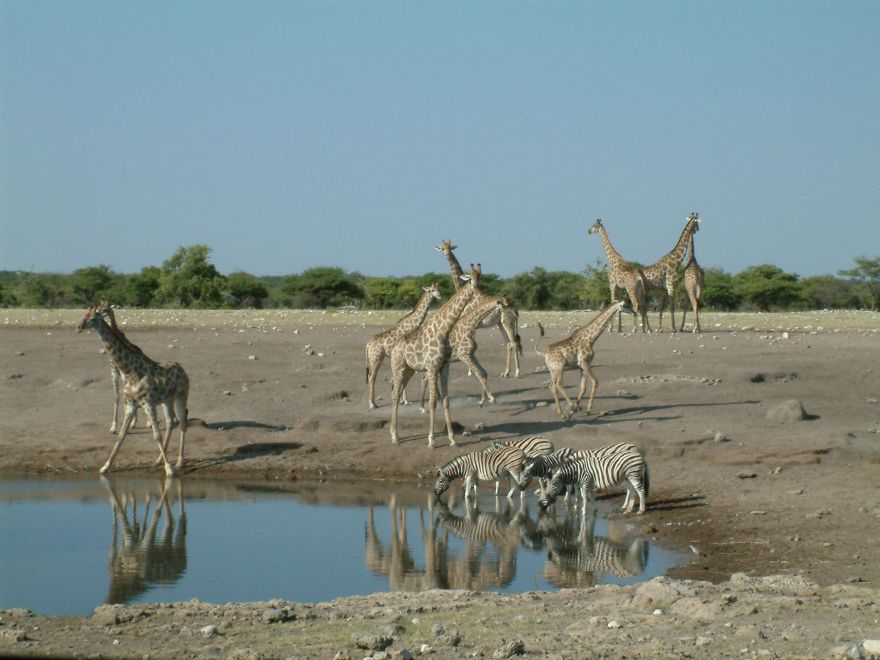 Etosha: It is not likely you will see any animals at the Etosha viewpoint. However, it is still worth a visit, as this is the only location in the park where you can actually enter the Etosha Pan. It is remarkable to see the curvature of the earth when you look at the horizon, imagine the magnitude of the Etosha Pan.

Goas: Goas is known for its abundant wildlife that can be seen at the waterhole. We have even watched a large herd of elephants drinking here. 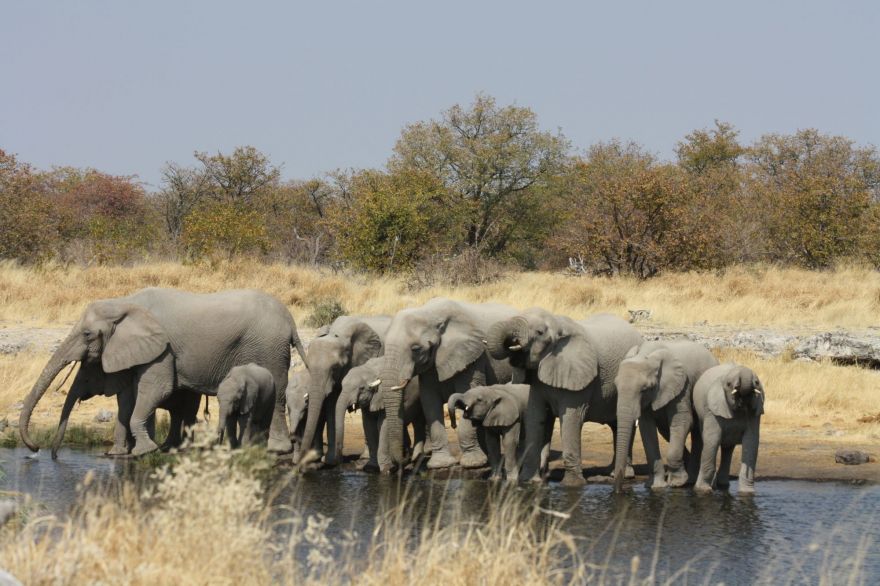 Groot Okevi & Klein Okevi: Two great waterholes, not too far from Namutoni. On all occasions we went to these two waterholes, we have seen wildlife, once even some elephants. 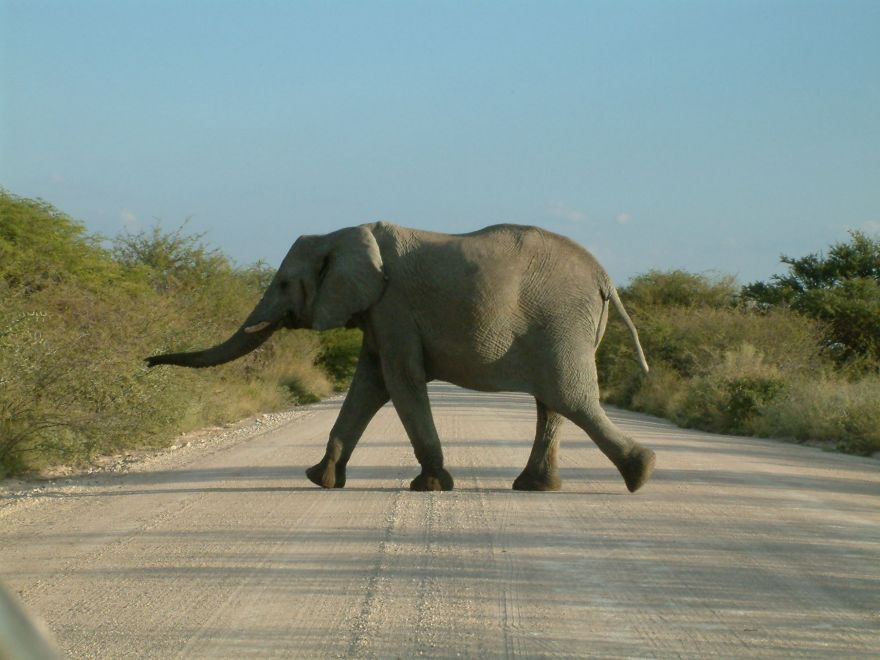 Halali: If you ask us, Halali is one of the best waterholes in the park. We have seen a large variety of animals here: various small game, herds of elephants and even a black rhino in the evening. 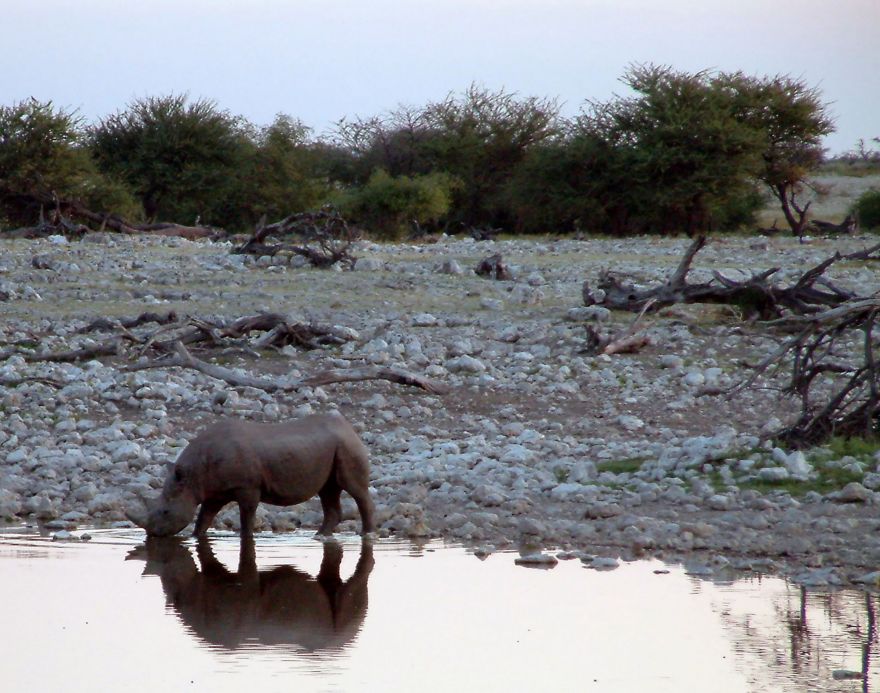 Kalkheuwel: Comparable with Chudob, there are almost always animals to see at this waterhole.

Leeubron: Although the name suggests otherwise, we have actually never spotted any animals around Leeubron.

Pan: A viewpoint that barely attracts any wildlife. However, the view on the Etosha Pan is worth a visit.

There are also various viewpoints around Dolomite and Olifantsrus Camps, however, we have not been able to visit these viewpoint yet. We can therefore not tell if it is likely to see any wildlife there. Maybe we will be able to update this blog in the future.

We highly recommend the Bradt Guide Namibia. We have used many guide books, but we think this one is the most complete and detailed, especially considering Etosha National Park. The author, Chris McIntyre, provides a lot of information, including a description of the viewpoints where he had great successes to spot wildlife. 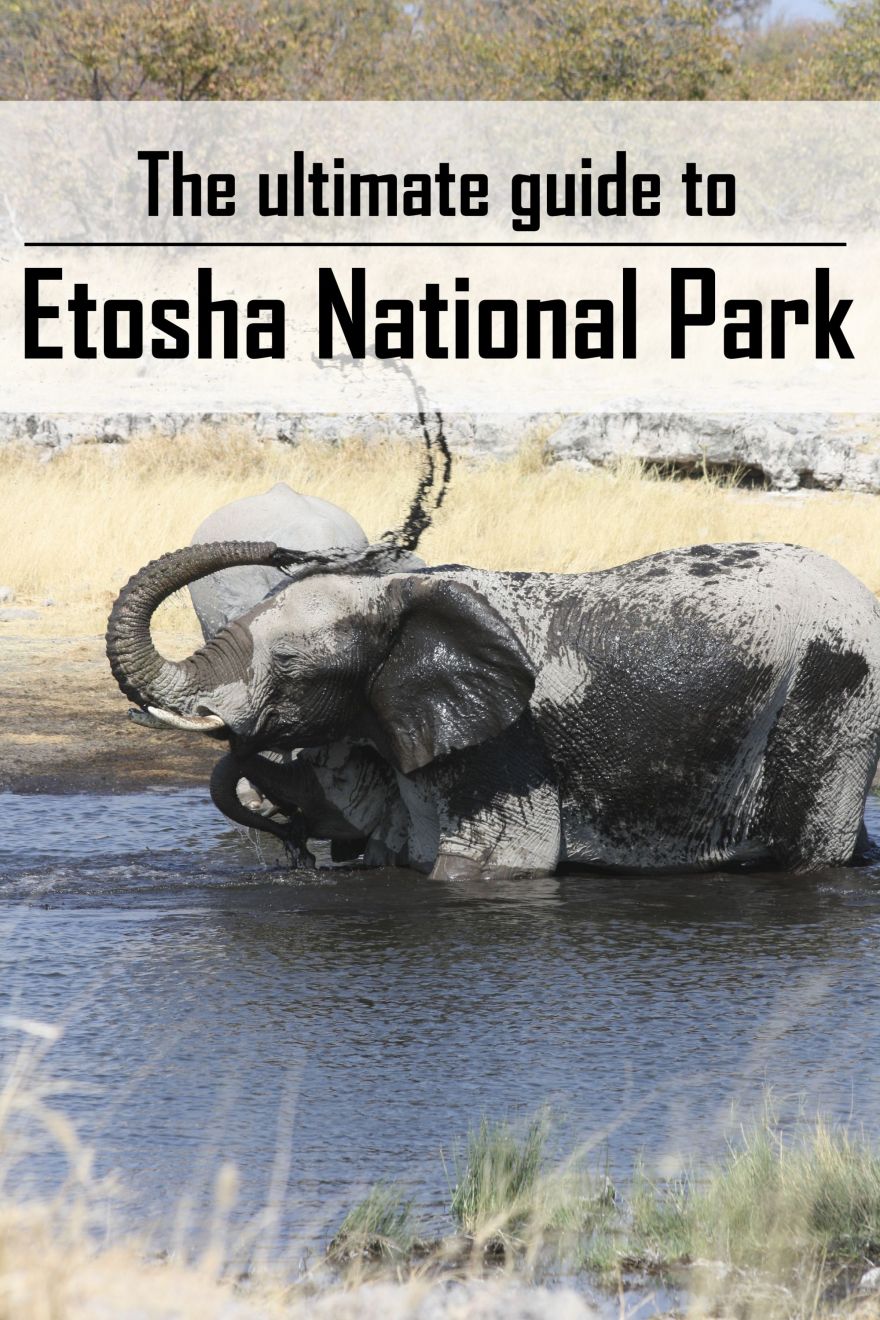