What to do in Death Valley National Park 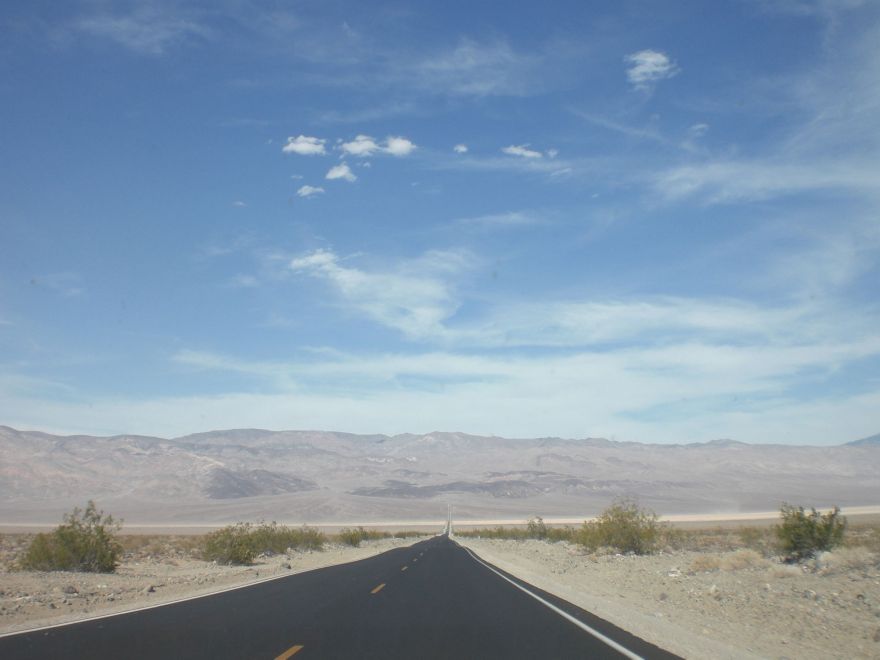 Once we were driving on Highway 190, we understood why it was advised to turn-off the air conditioning: the temperature was climbing and so did the road. A combination that is brutal for some car engines. After the first mountain pass, we thought that we had the worst. But we were wrong: a second mountain pass followed, that was even steeper and higher. With this second mountain pass, we also entered Death Valley National Park. The outside temperate indicator told us it was 116 degrees Fahrenheit (47 degrees Celsius). A ridiculous temperature, especially when you get out of your car. Like we did at the Mesquite Flats Sand Dunes. We did not walk to the sand dunes as it was way too hot for that. We just walked a few meters to take some photographs, but that was already very hot! We couldn't image that there are seriously people attempting to climb one of the sand dunes with these temperatures. 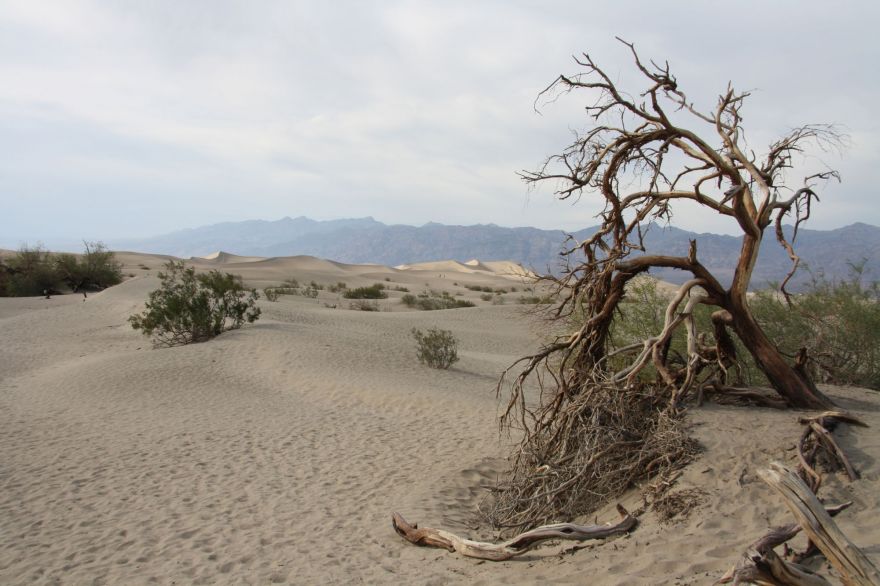 The temperature can get so high in Death Valley because it is located right in between different mountain ranges. Cool air from the Pacific Ocean is blocked by these mountains. This is also the reason why Death Valley is so dry and one of the hottest areas on our planet. Furnace Creek (what's in a name) even recorded a temperature of 58 degrees Celsius in 2013. 58 degrees Celsius! And that is where we were heading. Luckily, it was not that warm when we visited Furnace Creek. Just a mere 119 degrees Fahrenheit (48 degrees Celsius). 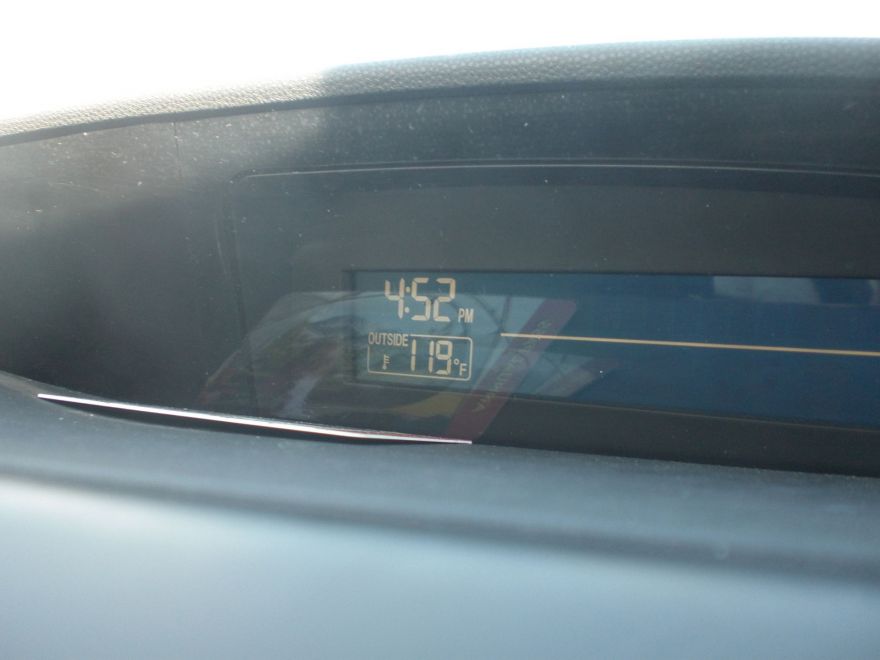 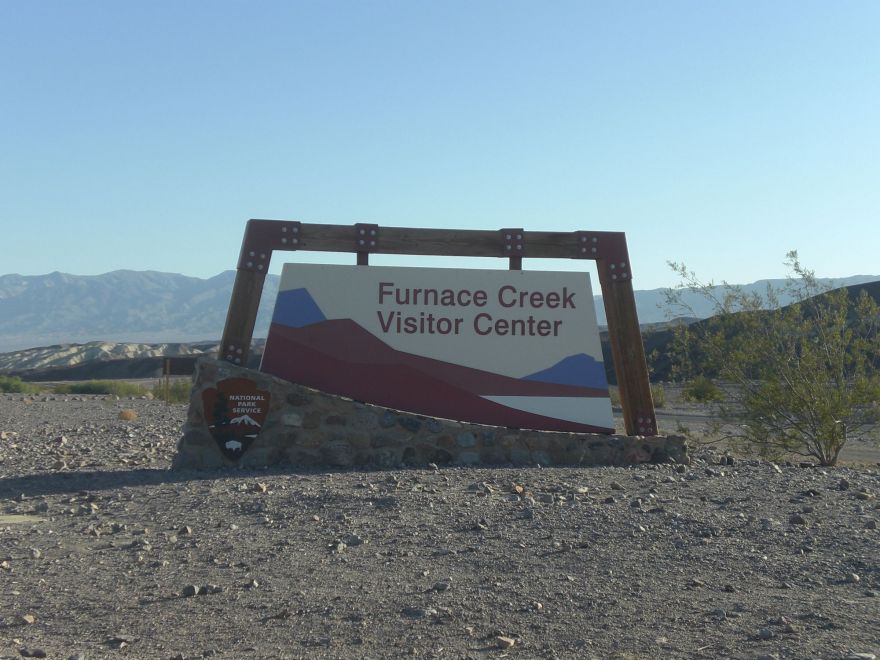 It is not unusual that the temperature rises above 50 degrees Celsius during the summer months. In fact, the average daily temperature for July and August is close to 50 degrees Celsius. Yes, the average temperature! Because there are not so many crazy fools that go the Death Valley during the summer, only one campsite was open (in Furnace Creek). When we arrived, we only saw 6 other guest at this huge campground. Three RV's and three small tents. Enough sites we could choose. Therefore we carefully considered where we would have the most shadow for the rest of the day. We only pitched the inner tent, as the outer tent was not really necessary with temperatures of 50 degrees Celsius. Even when we just sat next to the tent, sweat was still pouring down. Luckily there was a free water tap at the entrance of the campsite, so we could constantly refill our drinking bottles. Which was really required here! 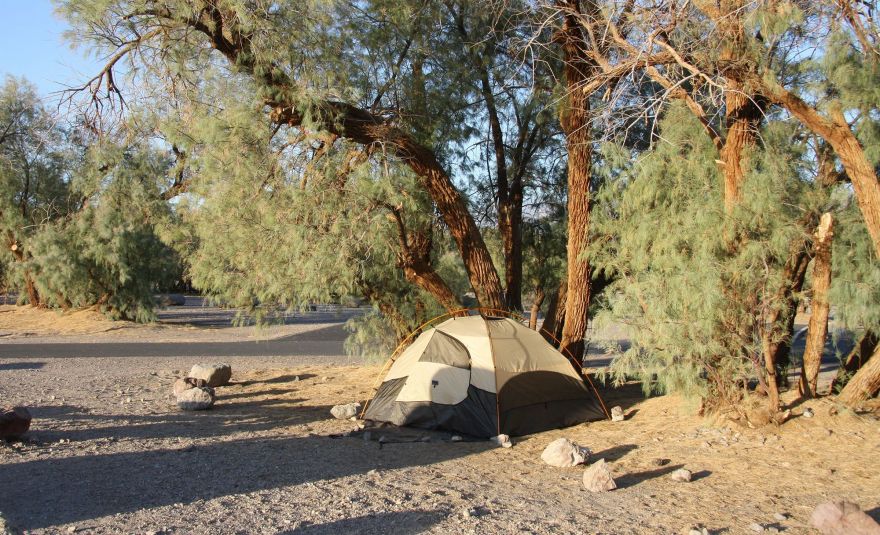 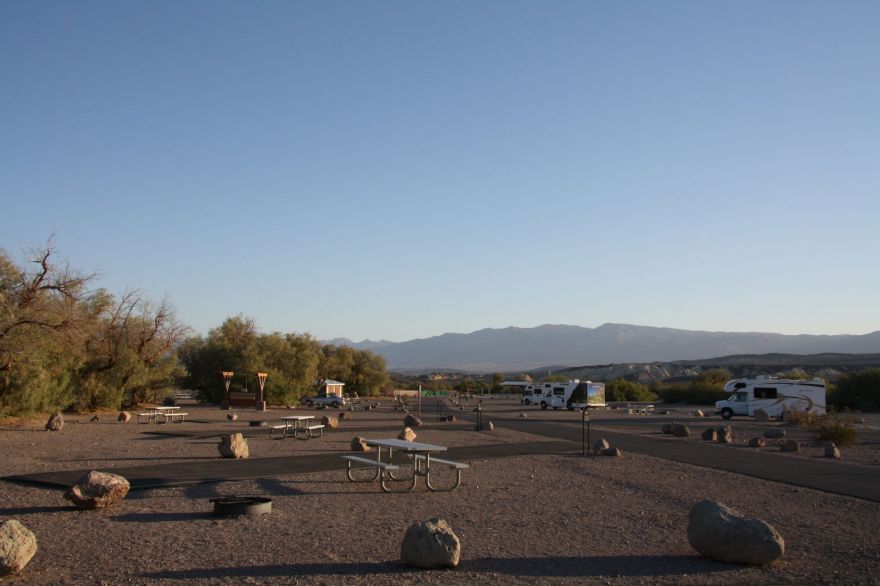 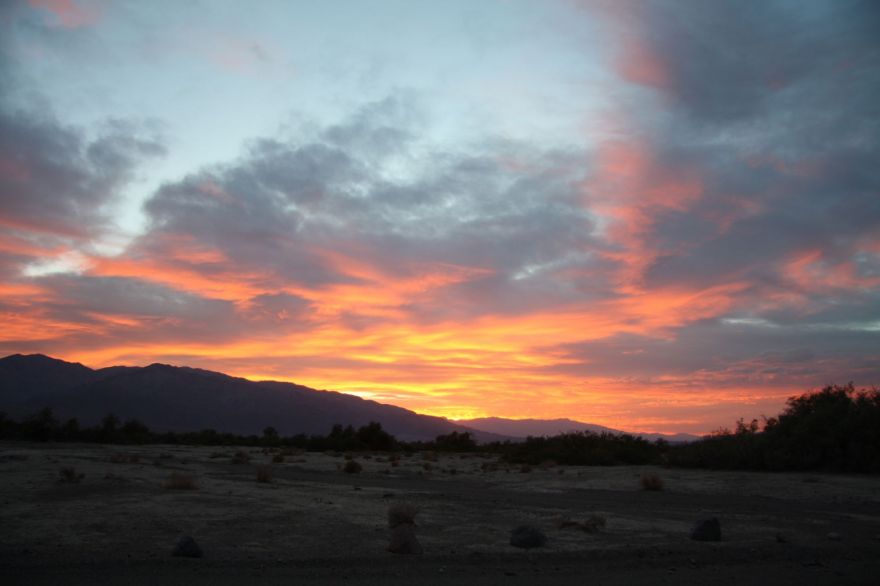 When night fell, there appeared to be a great starry sky. From our inner tent, we could see all the stars, what a way to fall asleep. Despite it didn't really cool-down (yes, to 38 degrees Celsius), we really slept well. Yet, we woke-up nearly every hour to drink some water. Even during the night. 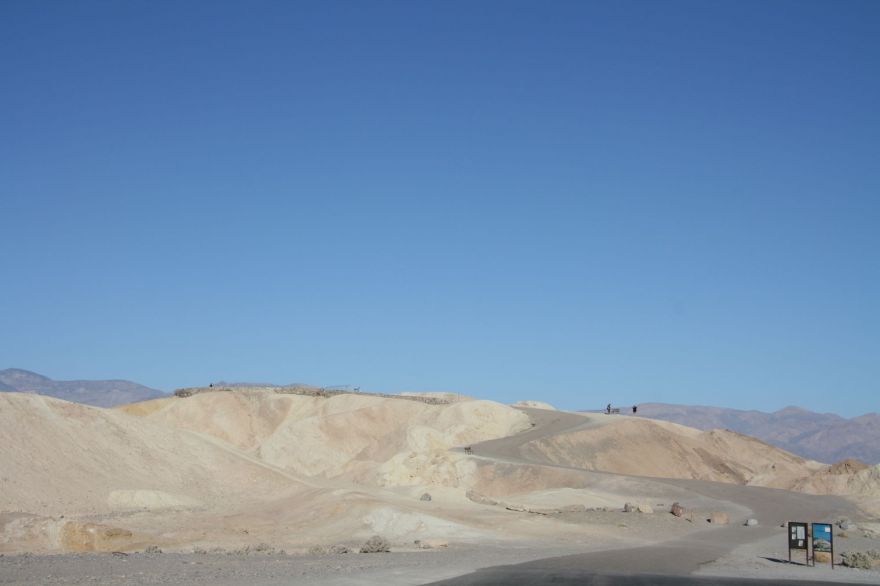 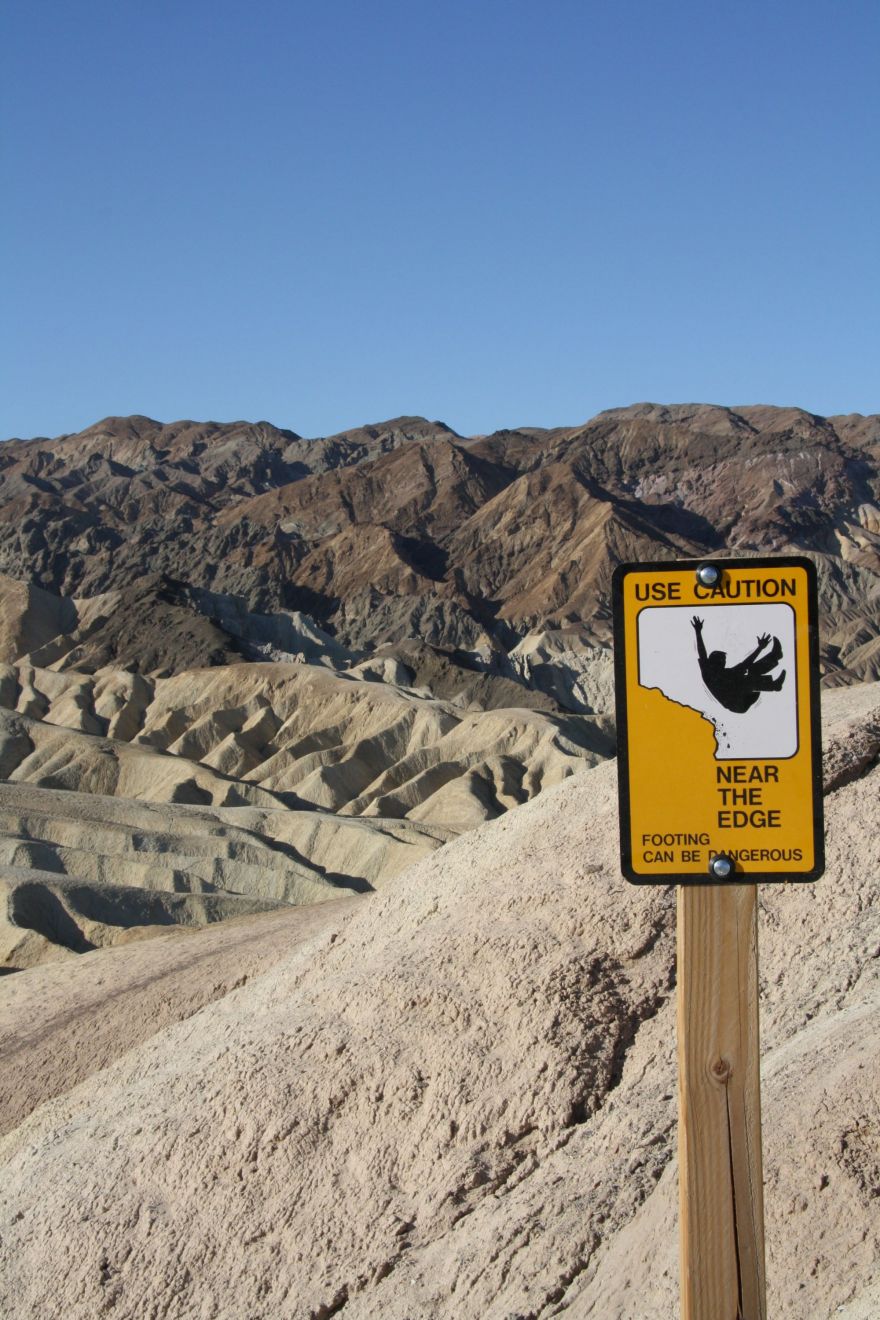 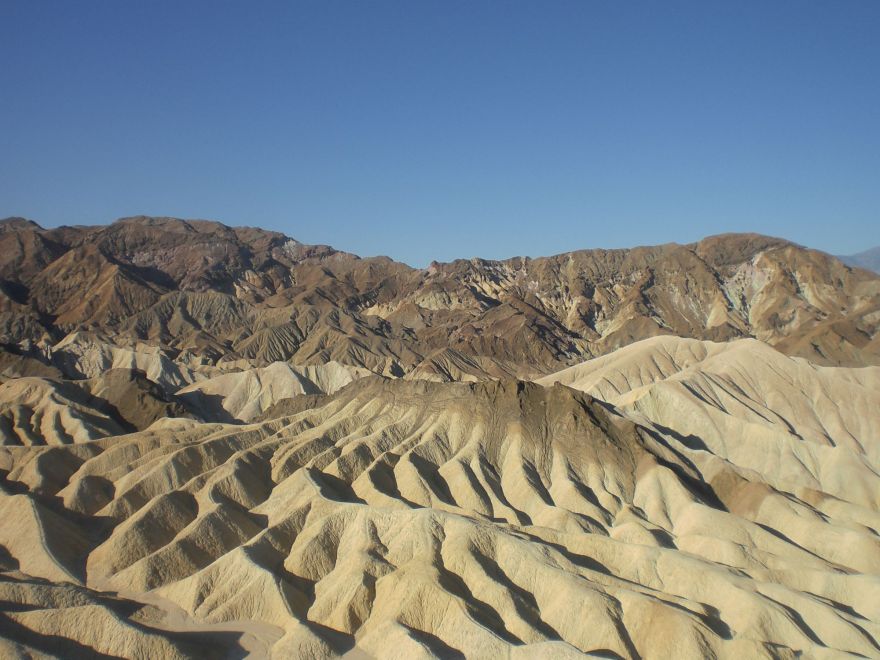 Next, we did Artist's Drive. A road that brings you to mountains with all types of colors. 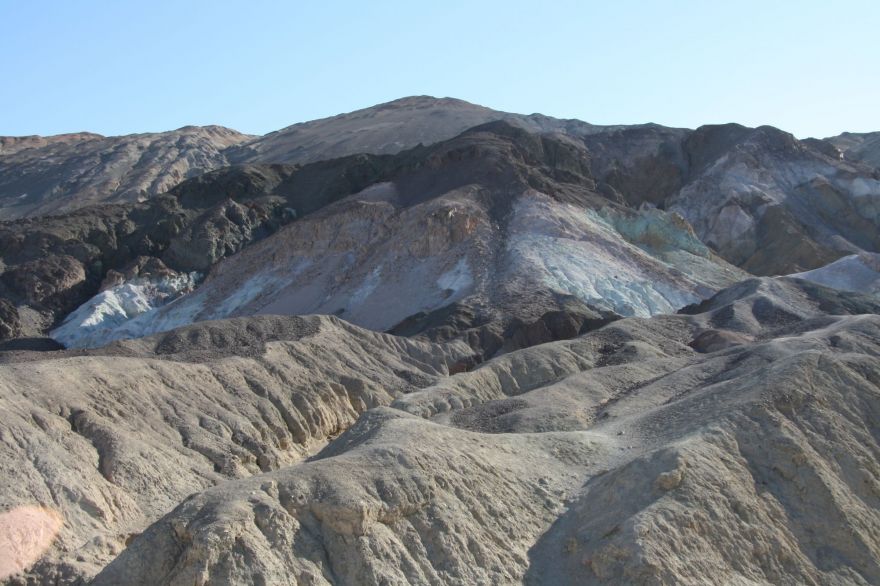 Then we went to Devil's Golf Course, which we first thought was a real golf course... However, it appeared that this was a huge salt pan, where only the devil would be able to play golf. 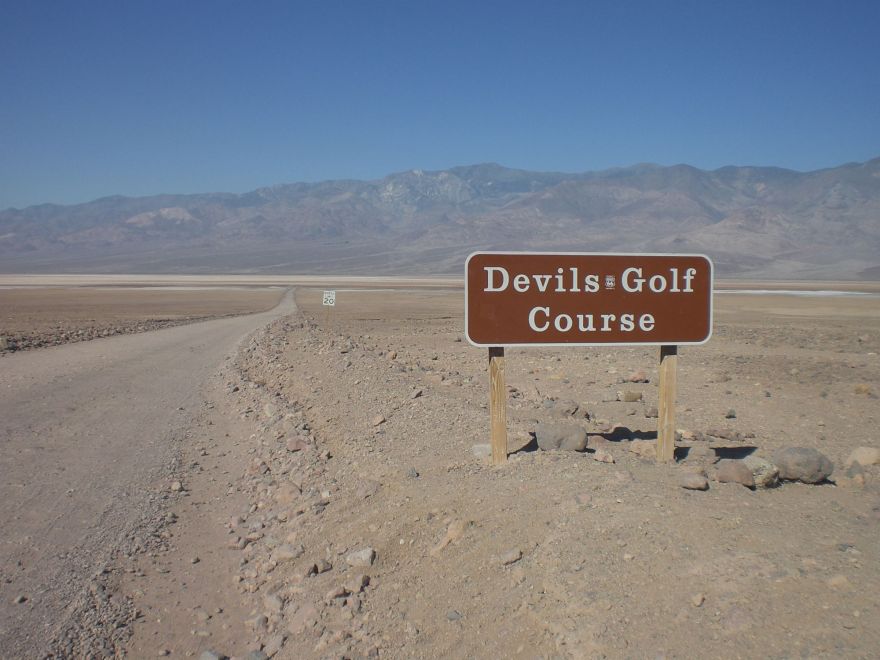 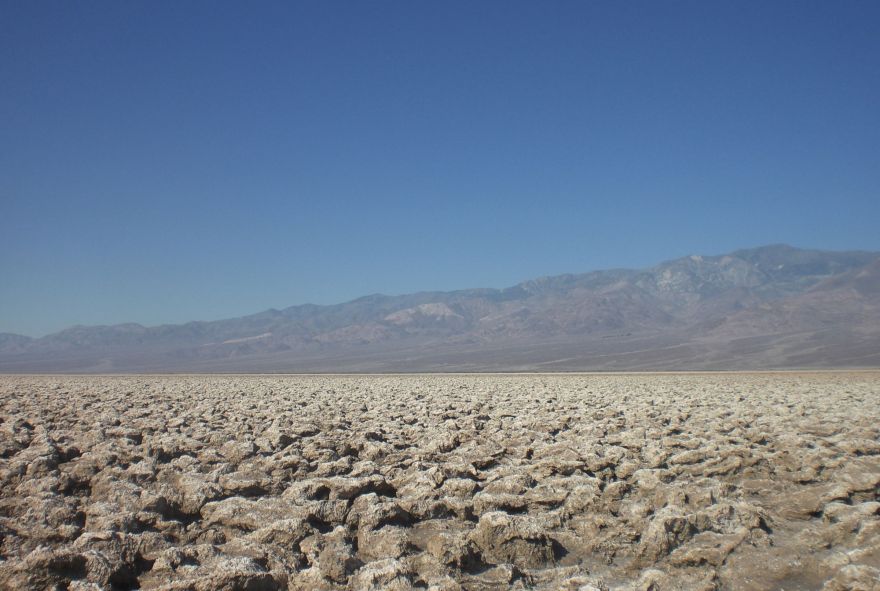 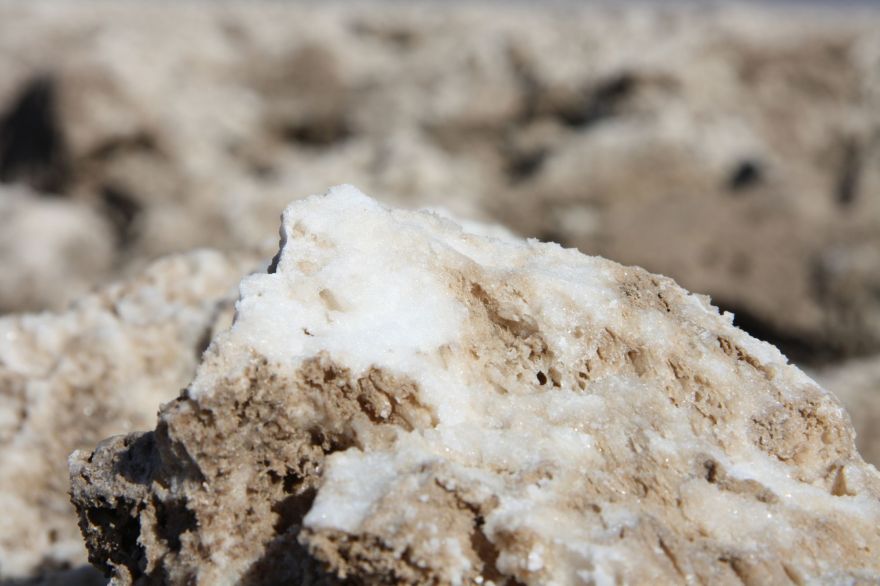 From there, we drove to Bad Water, which is the only natural water in Death Valley. Water from the mountains streams via underground rivers to the lowest point in the area: Bad Water. A sign told us that Bad Water was actually 85,5 meter below sea level. Another sign, at the rocks opposite the parking lot, indicated where the sea level would be. Crazy to see. By the way, Bad Water is named Bad Water because the water is way too salty for animals (and humans) to drink. 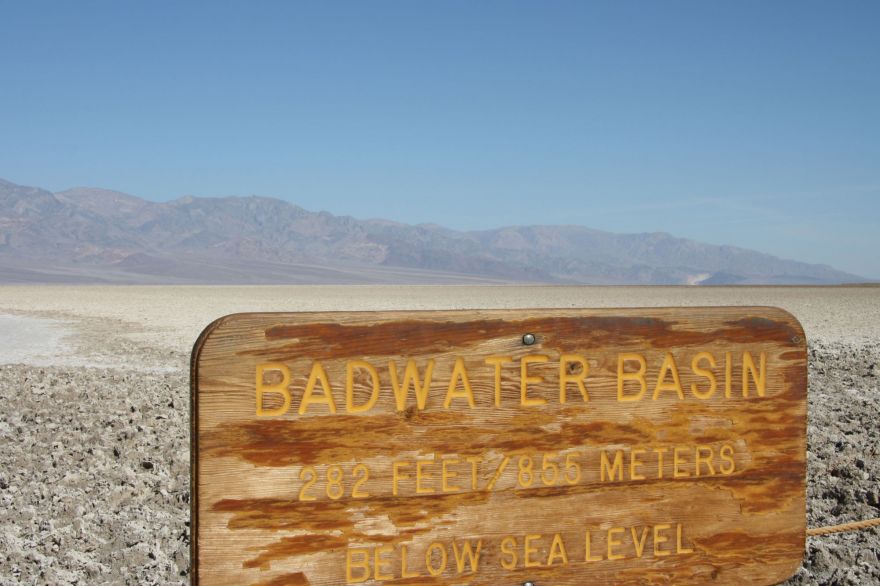 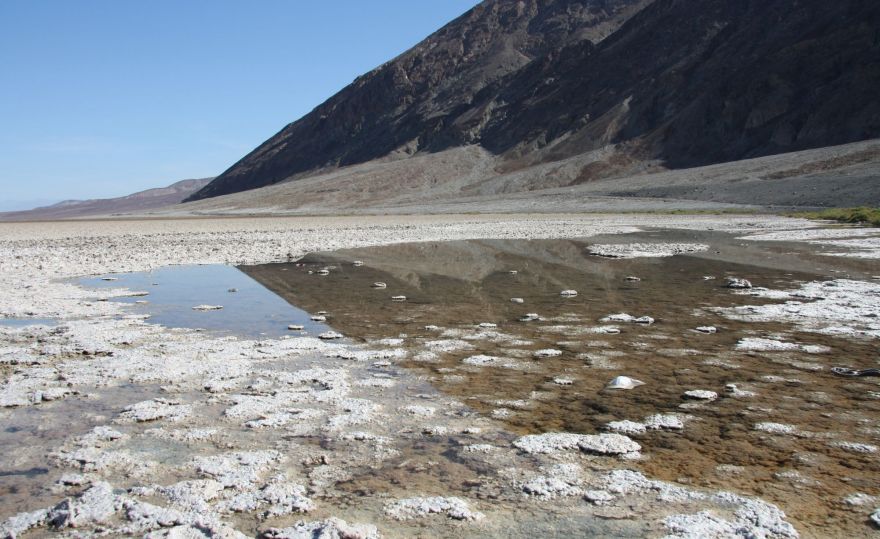 When we continued, we noticed a wild dog on the middle of the road. Remarkable to see that in such a desolate environment with these crazy temperatures, animals are still able to survive. 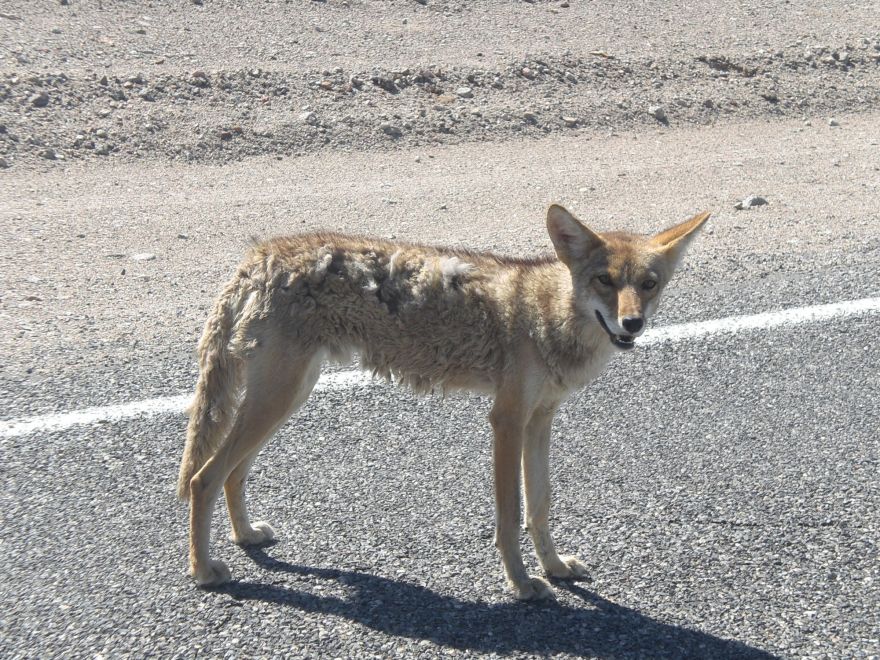 We made another stop at the ruins of Ashford Mill. However, this was not really spectacular. 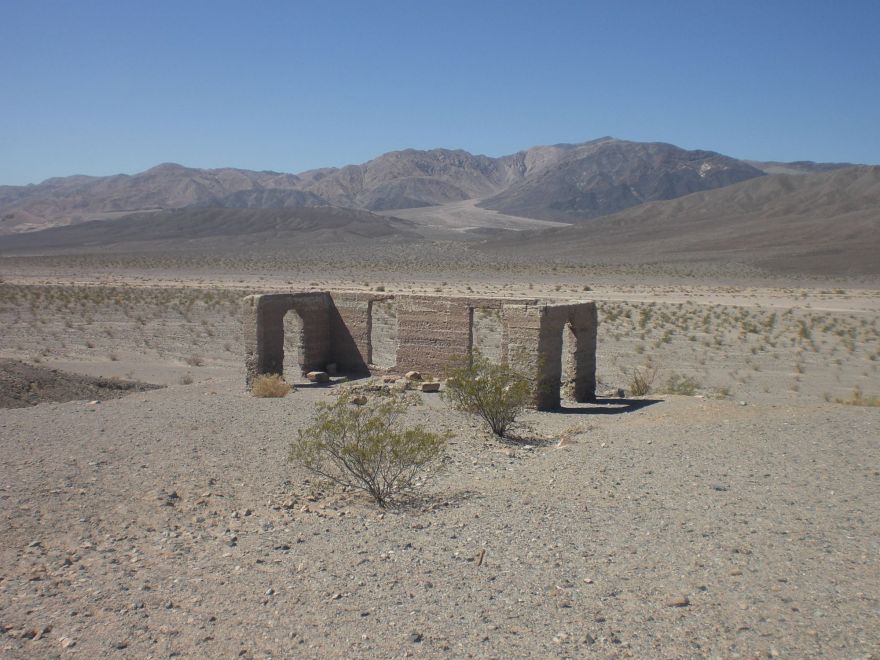 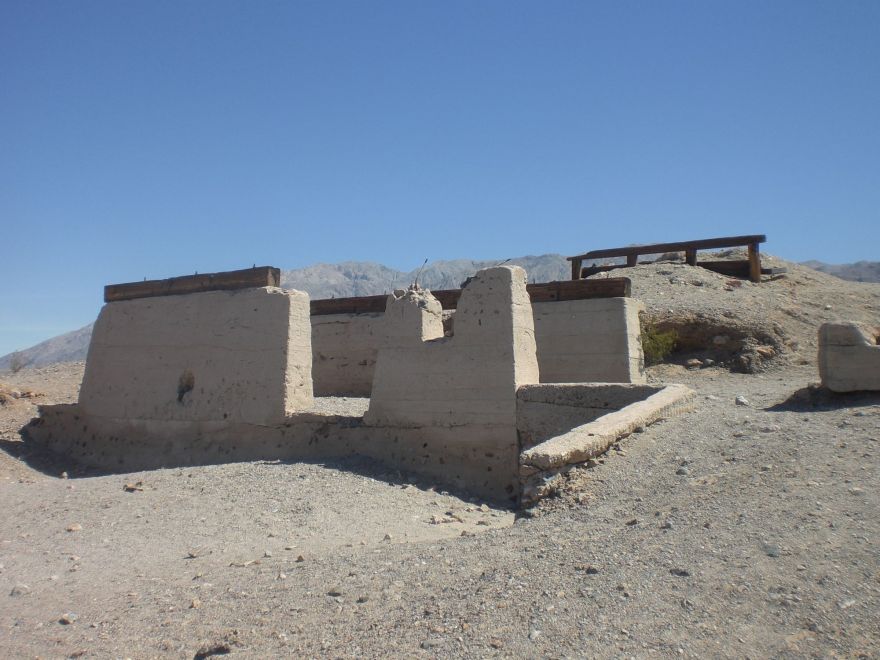 Next time, we definitely want to spend more time in Death Valley National Park. We would love to explore the mountain range to the west. It seems that you can make great day-hikes there, even whit temperatures around 50 degrees Celsius in Furnace Creek. Unfortunate, we didn't had the time to do any of these hikes this time. But at least we have probably seen and experienced more than when we would have driven to Las Vegas via Bakersfield and Barstow. 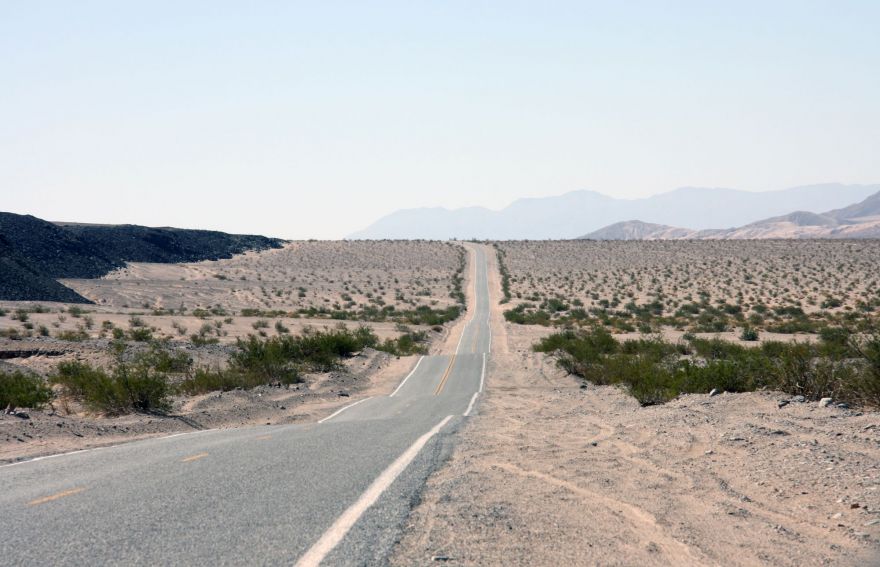