Friday evening at nine o'clock, we arrived at our hotel near the Copacabana. As it was already dark by that time, we had no idea what the city looked like. For the next day, we had booked a cycling tour, so we would see plenty of Rio de Janeiro. We would meet our guide at the most southerly point of Copacabana. From our hotel, we had to walk for about 20 minutes to get there. When we arrived at the meeting point, there was this white man with blond hair waiting and it couldn't miss that the Dutch bloke Jan Willem, owner of Rio by Bike. After a few minutes, two cabin crew members of the Royal Dutch Airlines and two of their family members also arrived for the cycling tour. Jan Willem was glad we were all Dutch, as he didn't had to worry about our cycling capabilities. As soon as we were given the bicycles from a local bicycle rental company, we cycled along the Copacabana. A great way to explore this famous beach. By the way, Cariocas (people from Rio) are not quite used to cyclists: they walk on cycling lanes, don't gave space to pass them, etc. After a few minutes, Jan Willem signals that he is going to stop. He explains that the building on the opposite side of the street is the Copacabana Palace. It appears that the famous beach was actually formed by the construction of Copacabana Palace. Before, there was nothing here, not even a beach. But this exclusive hotel changed everything. 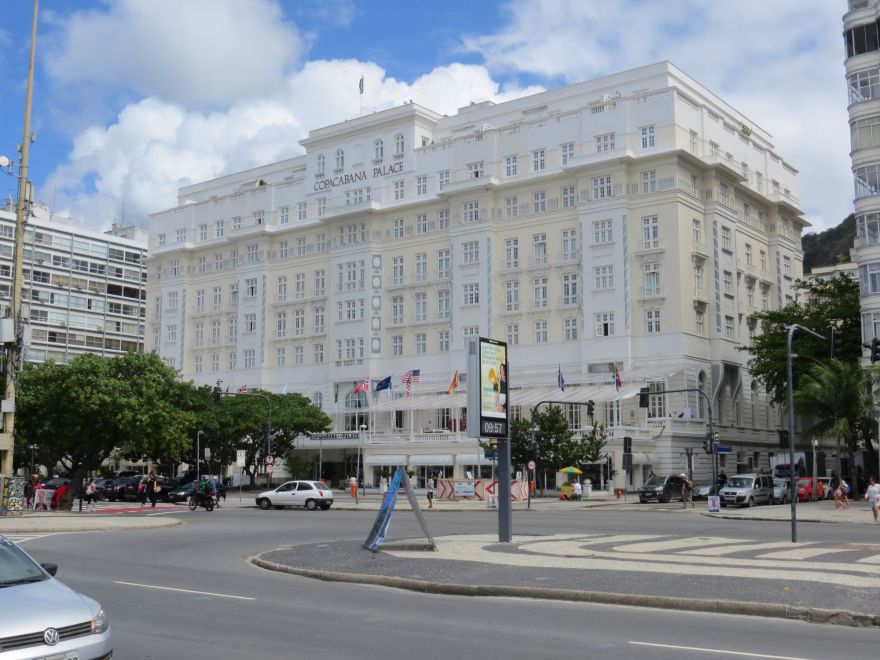 We continued, with Jan Willem leading the way. 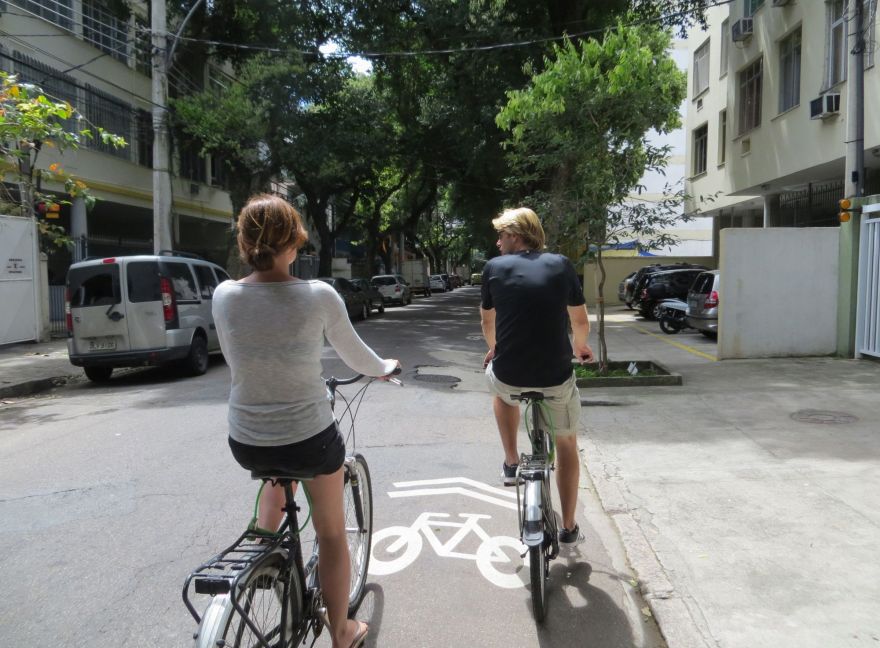 The next stop was Botafogo beach. From there we had a great view on Sugarloaf Mountain. Despite the beauty of the beach, it was completely desolated. 'That is because of the pollution', explains Jan Willem. He continues with the history about Rio de Janeiro. It was here, the Guanabara Bay, that was discovered by the Portuguese in 1502. Sixty years later, they built a small settlement at what they thought was the mouth of a river (which explains 'Rio'). However, the French were also eager to establish a settlement in the area. This lead to several battles between the French and the Portuguese. Still, you can see the French influences in the city, explains Jan Willem. 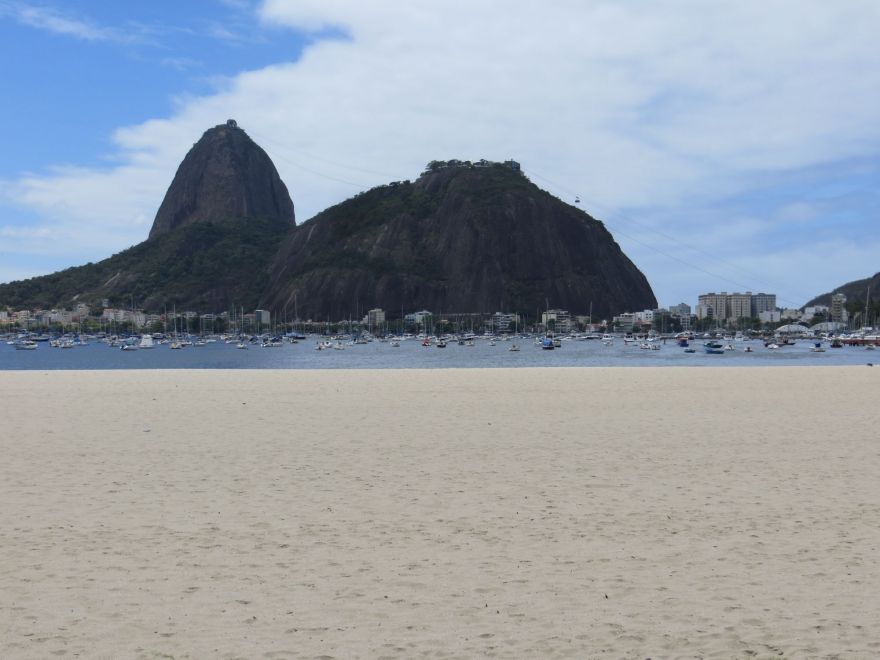 'Do you know in which James Bond movie the cable car plays an important role?' Nobody knew the answer to Jan Willems' question. 'Moonraker!' Of course, we should have known. Jan Willem doesn't stop here: the cabins of the cable car to Sugarloaf Mountain are designed for 75 people, but only 65 are allowed. Do you know why? Because obesity is a huge problem in Brazil.
We continue, no longer with Jan Willem in the lead. He just shouts directions to the one in front. We stop again in the shadow of some palm trees to get some cold drinks. After a few minutes resting, we continue and stop next to a large monument. None of us could have guessed that this is in fact a World War Two memorial. The Brazilian army also participated in the fights in Europe. This monument remembers the 467 fallen Brazilian soldiers. We continued cycling towards downtown. We stopped at Praça Floriano (also known as Cinelándia). A square right in the center of downtown Rio de Janeiro. The square is surrounded by prestigious buildings like the Opera and National Library. A building that clearly show the French influences in the city. 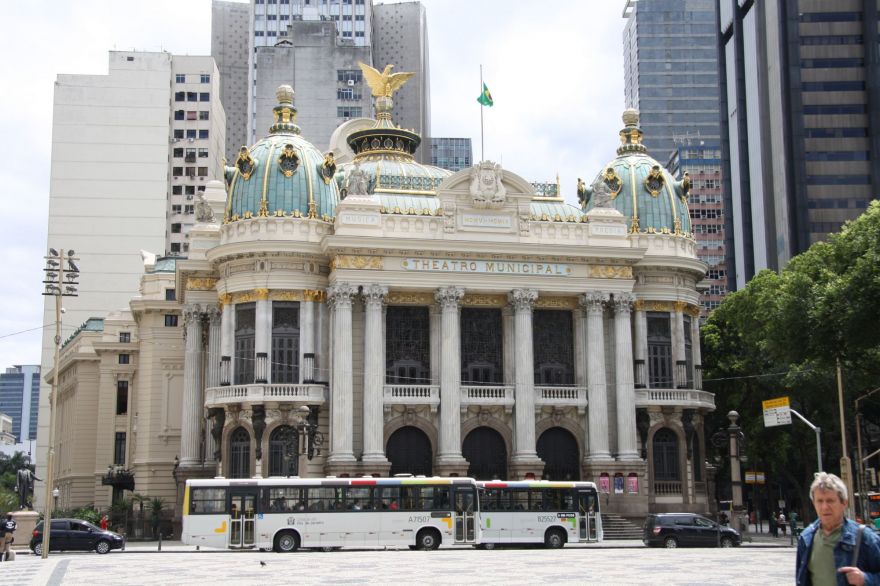 After this short stop, we continued towards the world famous stairs: Escaderia Selarón. Jan Willem parks his bike and tells us about the artist who started these stairs. Jorge Selarón (born in Chile) started painting the deprecated stairs next to his house. First, everybody thought he was wasting his energy. But when more and more people got interested in his work, he asked people to send tiles. He started using these tiles to decorate the stairs. This resulted in the colorful stairs we see in front of us. But the story continues: sadly, Jorge Selarón died last year. He was found dead at the bottom of the stairs. The reason of his death has never become clear. 'Let's continue in about 10 minutes, so you can wander around a little bit. But don't walk all the way to the top, because it is unsafe there.' Quite funny to read all the different tiles from all over the world. When everyone of us had had enough of the stairs, we continued towards the Carioca Aqueduct. This aqueduct is the oldest remaining building in Rio de Janeiro. However, it is no longer used to transport water. Nowadays, they use it for a tram. Which is currently not running because of maintenance work, explains Jan Willem. In 2011, a tram crashed killing 5 people. Since that day, they have been working on improvements, but nobody actually knows when this work will be completed. Behind the aqueduct, we saw the Cathedral of Rio de Janeiro. One of the most ugly buildings we had seen so far (sorry). It was built in 1964 and provide place to about 20.000 (!) people. Much better, is the head quarter of Petrobas next to the cathedral. This building has a huge opening in the form of a cross. The cycling tour continued partly along the same road we came in. Meanwhile, Jan Willem explains why he lives in Rio de Janeiro. It appears, he came to Rio de Janeiro as a journalist a few years ago. He wanted to know the city before the World Championship and Olympic Games would start. Well, we think he succeeded. When we arrive at the Botafogo Beach, we turn right, heading into Botafogo. This appears to be a great residential area. When cycling through the tunnel that connects Botafogo with Copacabana, we realize the cycling tour is nearly over. The last miles were quite a challenge: at every traffic light, we had to cross the street as the cycling lane continued on the opposite side of the road. This way, they do not really stimulate cycling... 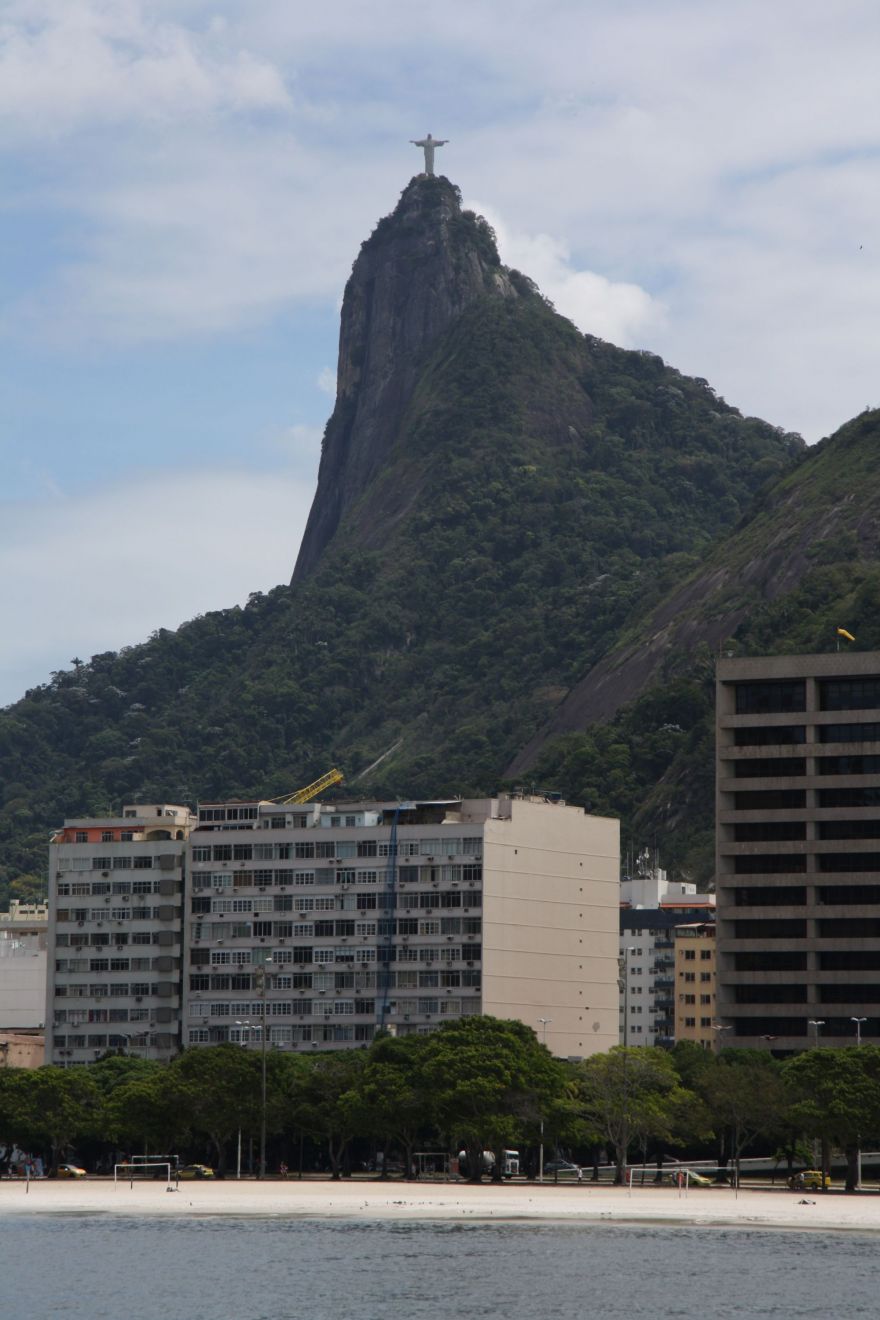 Eventually, we cycled about 30 kilometers. Because of the many stops, we hadn't noticed this at all. Except for the fact we had a severe sun burn. According to the weather forecast, it would rain today. But it was a bright and sunny day. Jan Willem: 'the weather forecast in Rio is always wrong, but that is because the city is so large. We can have rain here, while on the other side of town it is 30 degrees. Well apparently, he is right!

Exploring Rio by bike was great fun. Jan Willem gives just the right amount of information: not too much and definitely not too less. We can therefore highly recommend taking a tour by Rio by Bike.