Our adventures in Skeleton Coast

Every corner of the world is visited by tourists. Therefore, it can be so nice to be at a beautiful location without any other tourists. Not that we are shy or unsociable, it is just that we enjoy the emptiness of some location. We, for example, really loved to visit the Skeleton Coast in Namibia.

We had spend a number of days in Etosha national Park and planned to drive to Swakopmund. You can take the normal highway, which will bring you in about 3 hours to Swakopmund. However, we preferred to take a detour via Skeleton Coast. A detour that would take approximately three days. We packed our car with the necessary groceries in Outjo and stored an extra jerry can with petrol in the trunk of our car. The next three days we would be leaving civilization behind. Far behind.

The road from Outjo to Khorixas is a long and very straight (read: tiring) gravel road. We made a short stop to see the Vingerklip, a sole pinnacle in the desolated landscape. 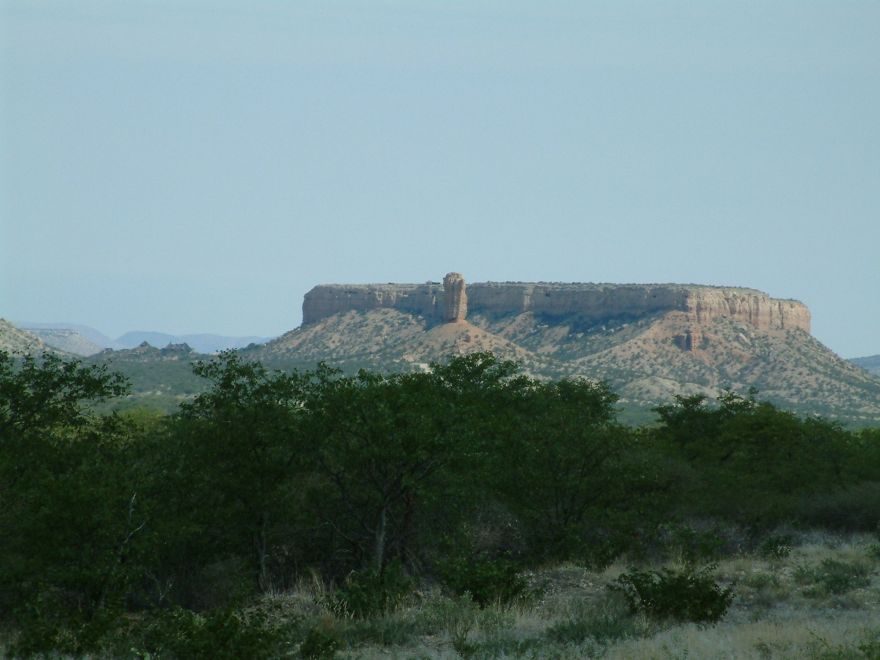 Not really spectacular, but at least were able to get out of the car for a second. On the way back to the main road (the gravel road to Khorixas), a bird decided that our radiator was the perfect spot to commit suicide. The poor bastard! We had to remove it using branches, luckily our radiator wasn't damaged.

Closer to Khorixas, the landscape started to change. We, for example, had to drive through a number of (dry) river beds. Sometimes these river beds were so deep, that the front of the car hit the ground. Therefore, we couldn't make much speed, but late in the afternoon we finally arrived in Khorixas.

The next day, we continued towards the Skeleton Coast. First, however, we made a stop at the Petrified Forest. Here, we saw fifty trees that turned into rock. What is so special about that, one might ask. Well, the trees have no roots. So they think that the trees reached this location during a flood. We couldn't image that the entire area was flooded, but apparently it was, many years ago. But after the tenth tree, we had seen it. Sorry to say, but a tree is a tree... 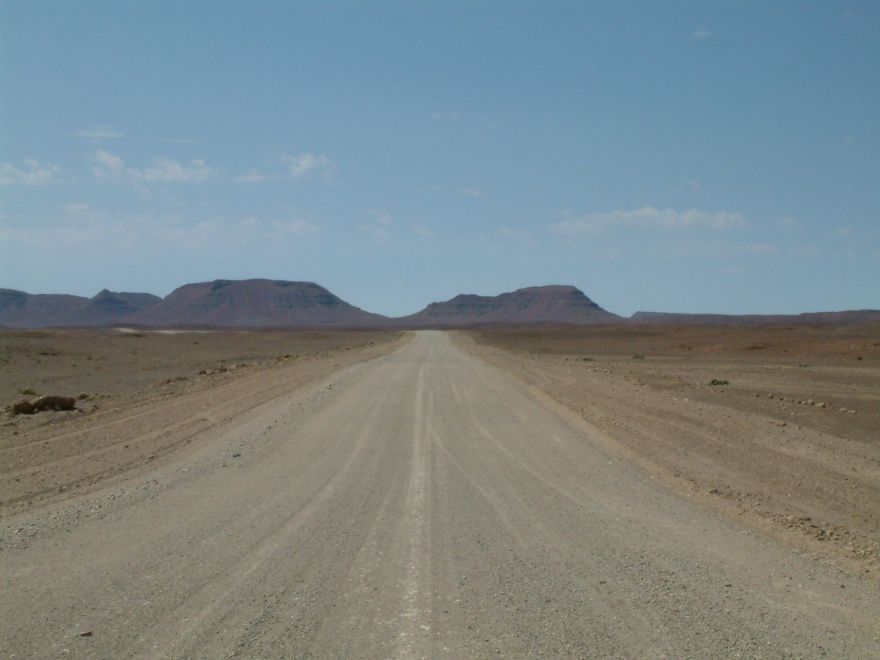 Back on the road, the desolate landscape was getting even more desolate. Did we see some bushes earlier that day, we didn't see one in the afternoon. Everything was just sand. Everywhere sand. We had to negotiate a number of mountain passes. Our two-wheel drive car had some difficulty driving these mountain passes. In one occasion, we even had to go back to the first gear in order to be able to move on. But we and more importantly: the car managed! And then suddenly, in the desolate and empty landscape, we reached a building: the Springbokwasser Gate. Our way into Skeleton Coast. Because the area is so desolate, everybody need to register when entering and when leaving the park. So we completed all registers, had a chat with the local security officer and continued our way.

From the gate, the road starts to descends. In about 120 kilometer, the roads drops about 1.000 meter. You instantly get a great view over the completely empty landscape. But as we were getting closer to the coastline, also the weather was changing. Was it a steady 30 degrees Celsius with a clear blue sky earlier that day, we now had sight on some clouds. Later, the clouds appeared to be the famous Skeleton Coast fog. Because the cold air from the Benguela Current collides with the warm dessert air, fog is a common phenomenon along the coast of Namibia. The same fog that has caused many ship wrecks. It wouldn't take long before we would actually see the first skeleton of a ship. 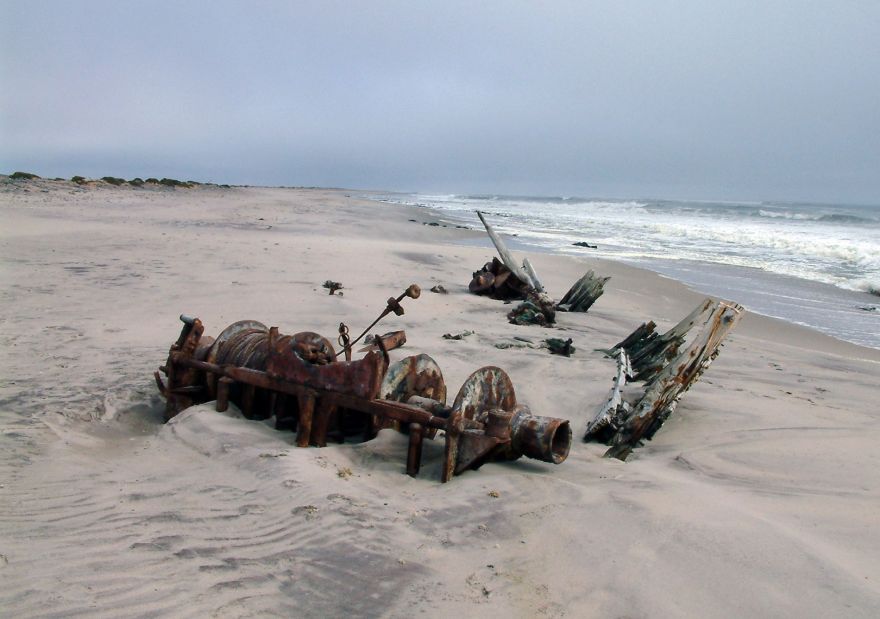 When we arrived at the shoreline, there was a road turning right. However, you need a special permit for this road, which we didn't have. So we turned left, the road towards Swakopmund. For miles, we drove on a road made out of salt. Because the cars constantly put pressure on the salt, the salt becomes a very hard surface, comparable with tarmac. However with the difference that there were some huge potholes in the salt road. Because of the potholes, we met the first car of the day (really!): an Italian couple had a flat tire with their jeep. Because the area is so desolate, help is sometimes far away. We therefore asked if we could help, but they were alright they said.

A little further down the road, we suddenly had to stop for a gate. However, there was no security guard or whatsoever. After a while, one turned up. It appeared he was heading for the Italian couple to check if they needed help. He was glad to hear they were alright, after which he opened the gate for us. But first he told us that we were not allowed to stop until we had crossed the next gate. We were now driving in a so called Sperrgebiet (exclusion zone) where they mine diamonds. Unfortunately, we were not able to see any 'shiny' material at the side of the road. When we arrived at the second gate, this was immediately opened for us. We were summoned to drive through without having to stop.

Not long after, a loud noise suddenly started. 'Oh dear...' We parked our car at the side of the road and had a look where it could come from. However, we couldn't see anything. But as soon as we started driving again, the noise started. We inspected everything and it appeared that a rock got stuck between the braking disc and the rear right wheel. Don't know how on earth that was possible, but it was. While we took the wheel off for a closer inspection, the Italian couple drove by. They didn't even slow down to ask if we needed help! Some people... After wiggling a bit with some branches, we were able to get the rock out of its bizarre position. 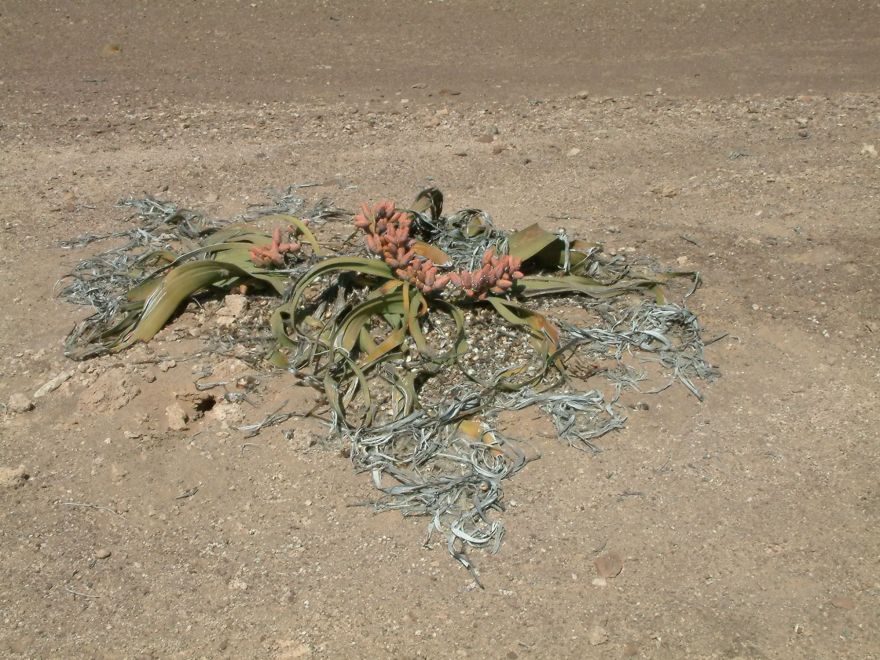 Late in the afternoon, we arrived at the south gate of the Skeleton Coast. We again completed all registers and continued towards Henties Baai (approximately one hour from the gate). We would have loved to spend the night in Skeleton Coast, however, we didn't bring the right equipment. But next time... The next day, we drove on towards Swakopmund, another three hours of driving. Meaning that the detour through Skeleton Coast involved a lot of hours in the car. But was it worth it? Definitely! Seeing and experiencing such a desolate and truly empty landscape on your own is a unique experience. The Italian couple and the security guard were the only humans we saw that day. There are not that many locations where you see so few people.