Sunday morning at 9am, we got on the Go Orange bus to Milford Sound. A large bus for just a handful of people. There was plenty of space to make it comfortable for everybody. The first part of the road was very pretty, according to the driver. He, therefore, advised to take a nap now it was still possible. We left Queenstown and shortly after, we drove along the winding road next to Lake Wakatipu. Beautiful, but not really a road where you can do a nap. After about two hours, we arrived in Te Anau, where we stopped for a 30 minute break. 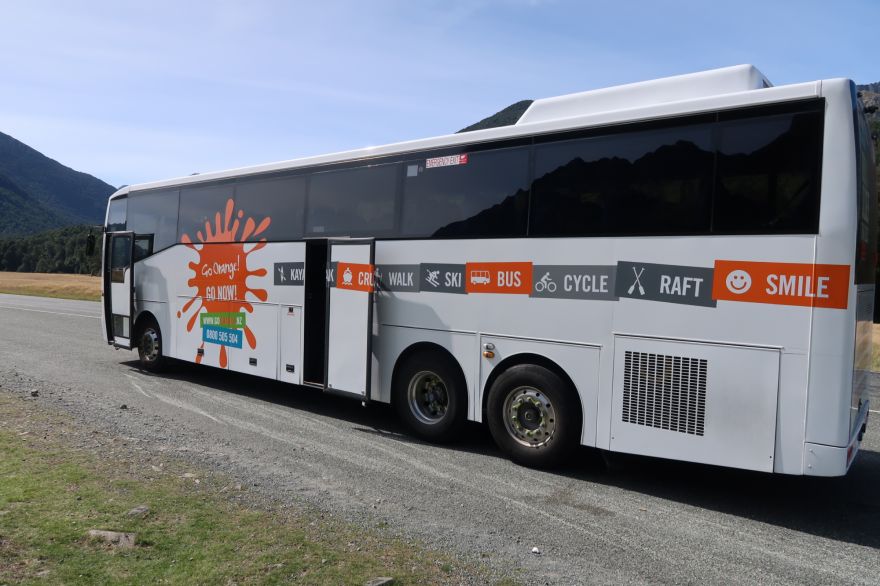 Once we got back in the bus, the driver told us that the road from Te Anau to Milford is very scenic. It was constructed in the 1930s and winds its way through the Southern Alps and over the Divide (the divide between the eastern and western side of the Alps). Along the way, the bus made a few scenic stops. Our first stop was at Eglinton Flats. The valley was carved out by glaciers thousands of years ago. Today, steep rocky mountains covered in native beech forest line the valley. While we are still taking photos, the bus driver starts the engine of the bus, for us a sign to get back on board. Next stop: Mirror Lake. Just as the name says so, the reflection of the mountains in the water is stunning. A funny detail is the D.O.C. sign of Mirror Lake: which is placed upside down so you can only read the sign in the reflection of the water. A little further down the road, we made another stop: Knob Flats (mainly a toilet break) and Monkey Creek. We saw many people fill up their water bottles here. Apparently, the water of Monkey Creek gives you eternal life. Hmm…
Back in the bus, we continued and drove through the Homer Tunnel. A 1.200 meter long tunnel that passes an active fault line. The last stop we made was at The Chasm. A short boardwalk provided dramatic views of powerful waterfalls and water-sculpted shapes in the rocks. However, it was way too busy here to see the rocks. We quickly fled back to the bus. 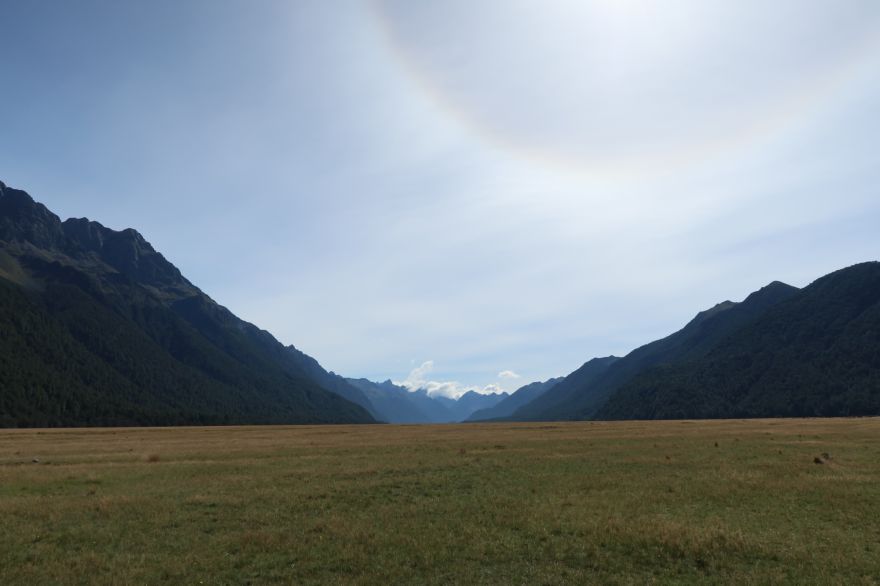 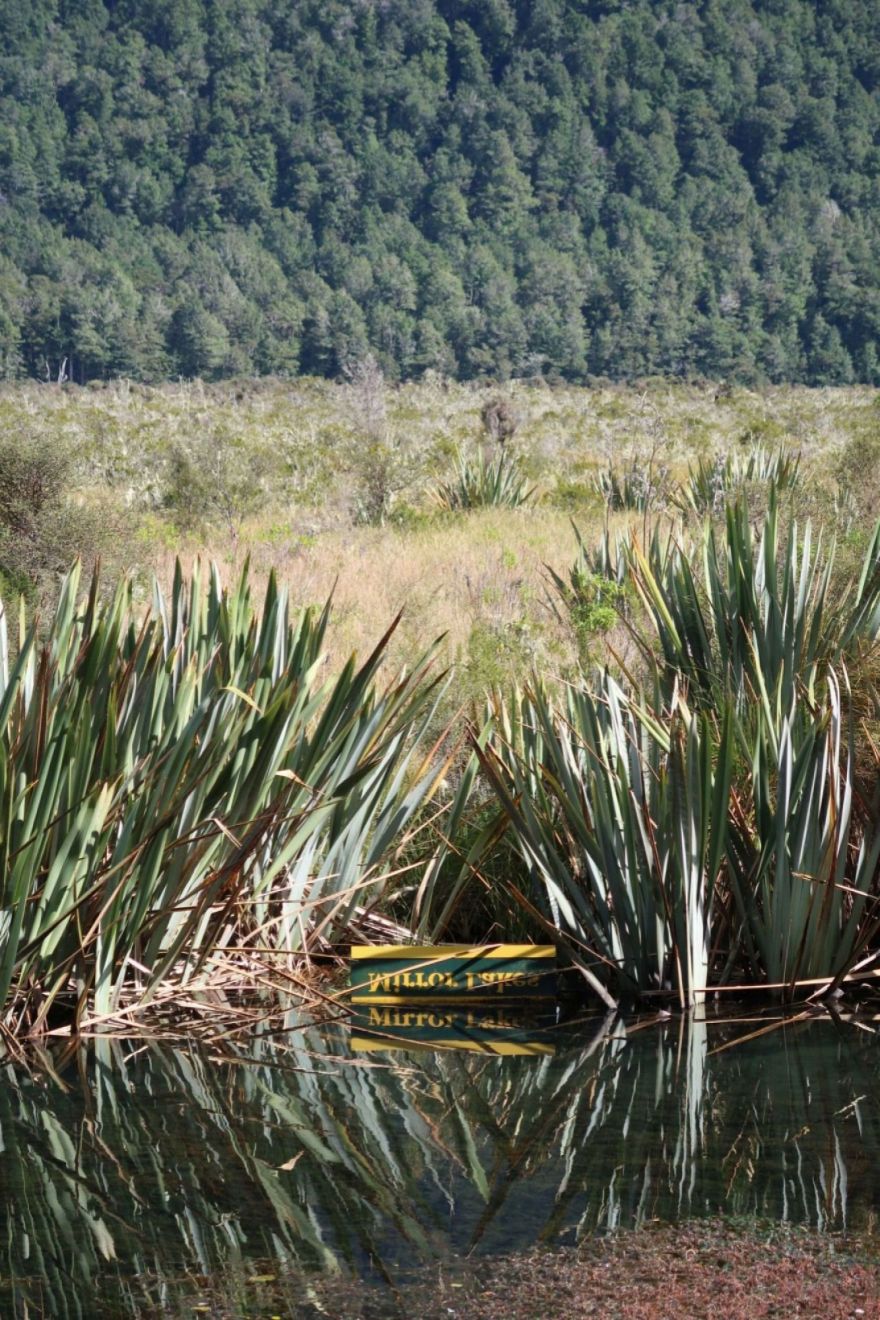 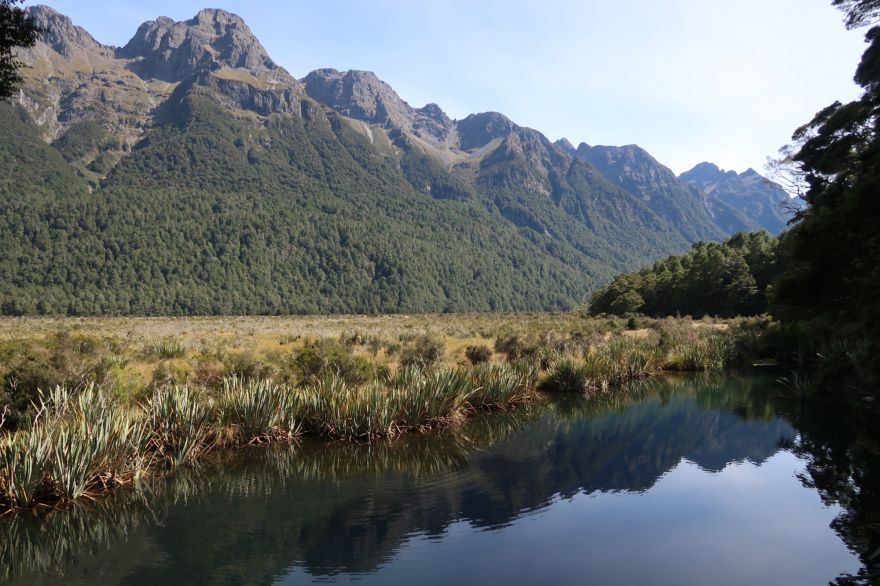 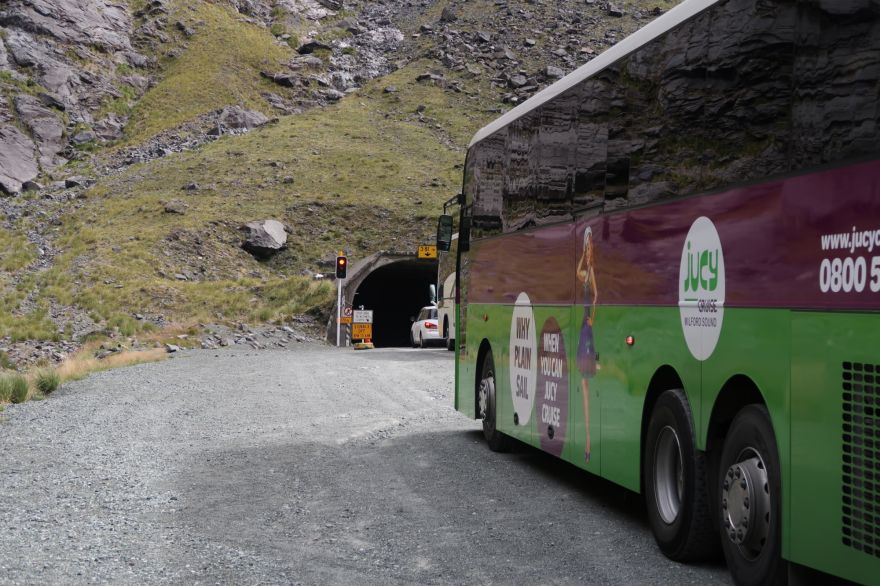 Five hours after leaving Queenstown, we arrived in Milford Sound. The driver gave us the boarding ticket for the boat that was already waiting for us. Just minutes after we got onto the boat, it left the harbor. Similar to the bus, we had plenty of space on board. We choose to sit on the upper deck. Marjon could sit with her leg high and still enjoy the scenery. The captain told us what we saw: rocks, wildlife or just funny stories about the region. We sailed one hour along the magnificent cliffs towards the Tasman Sea and one hour back. The weather was perfect and provided a dramatic look of Milford Sound. One of the highlights was the 155 meter high Stirling Falls. The captain navigated the boat close to the waterfall. Everybody standing at the foredeck got soaking wet, but how cool was that. 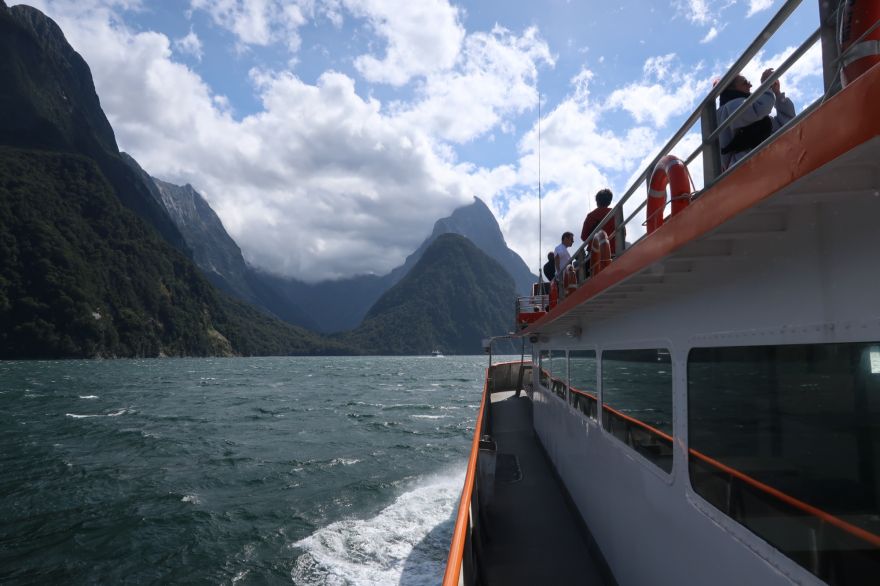 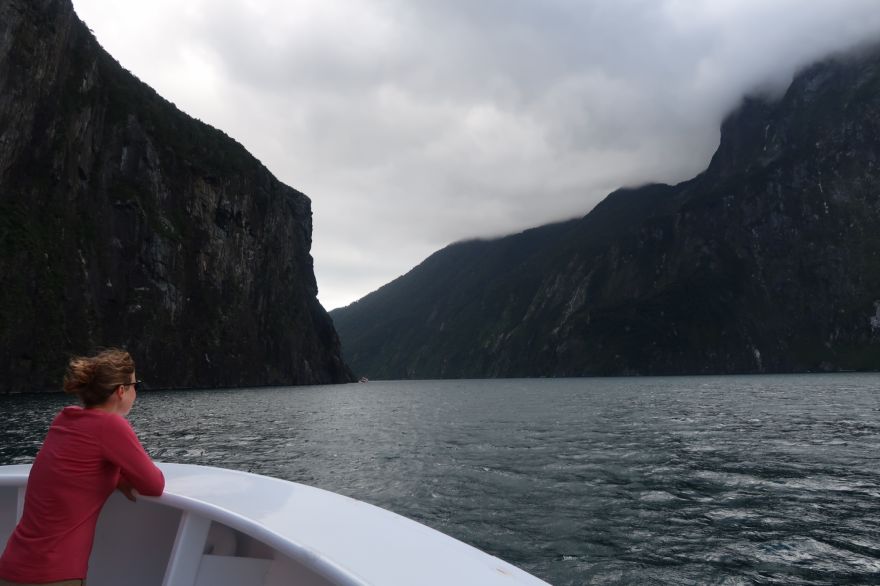 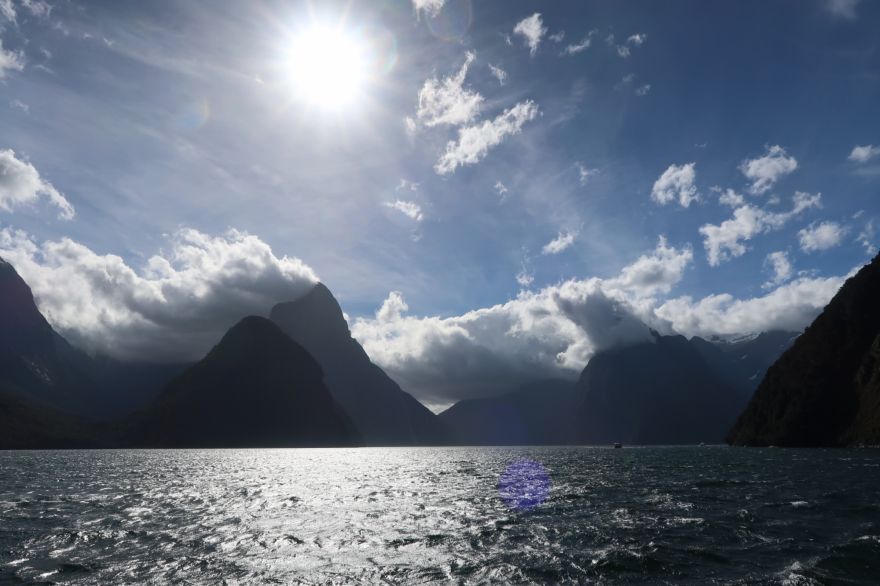 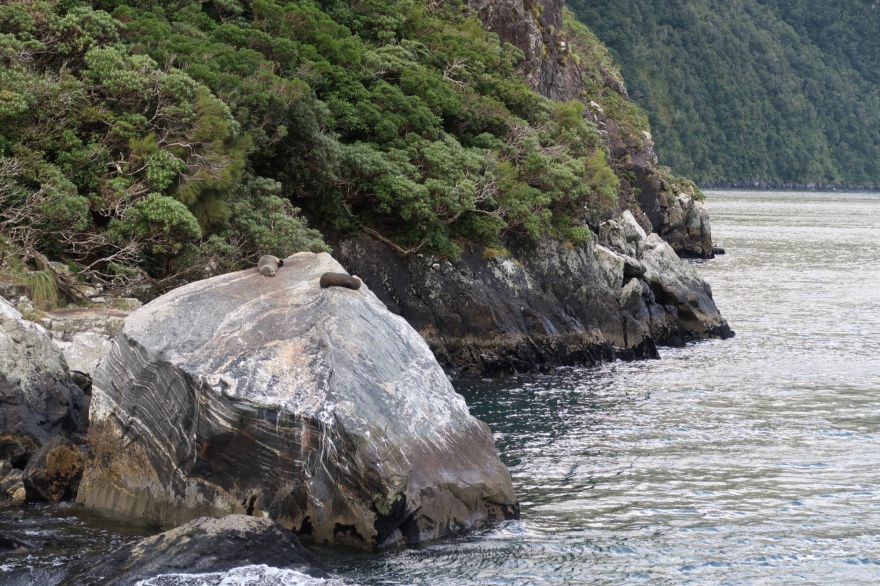 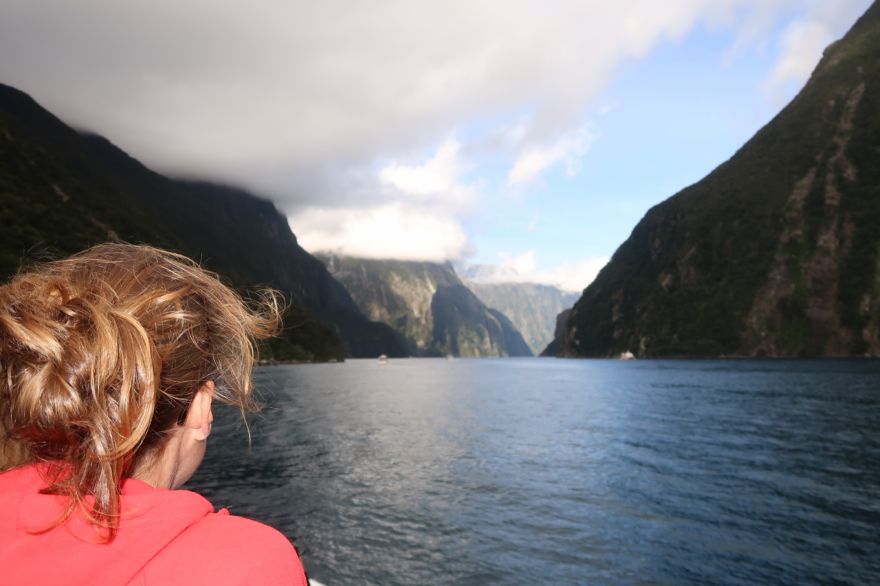 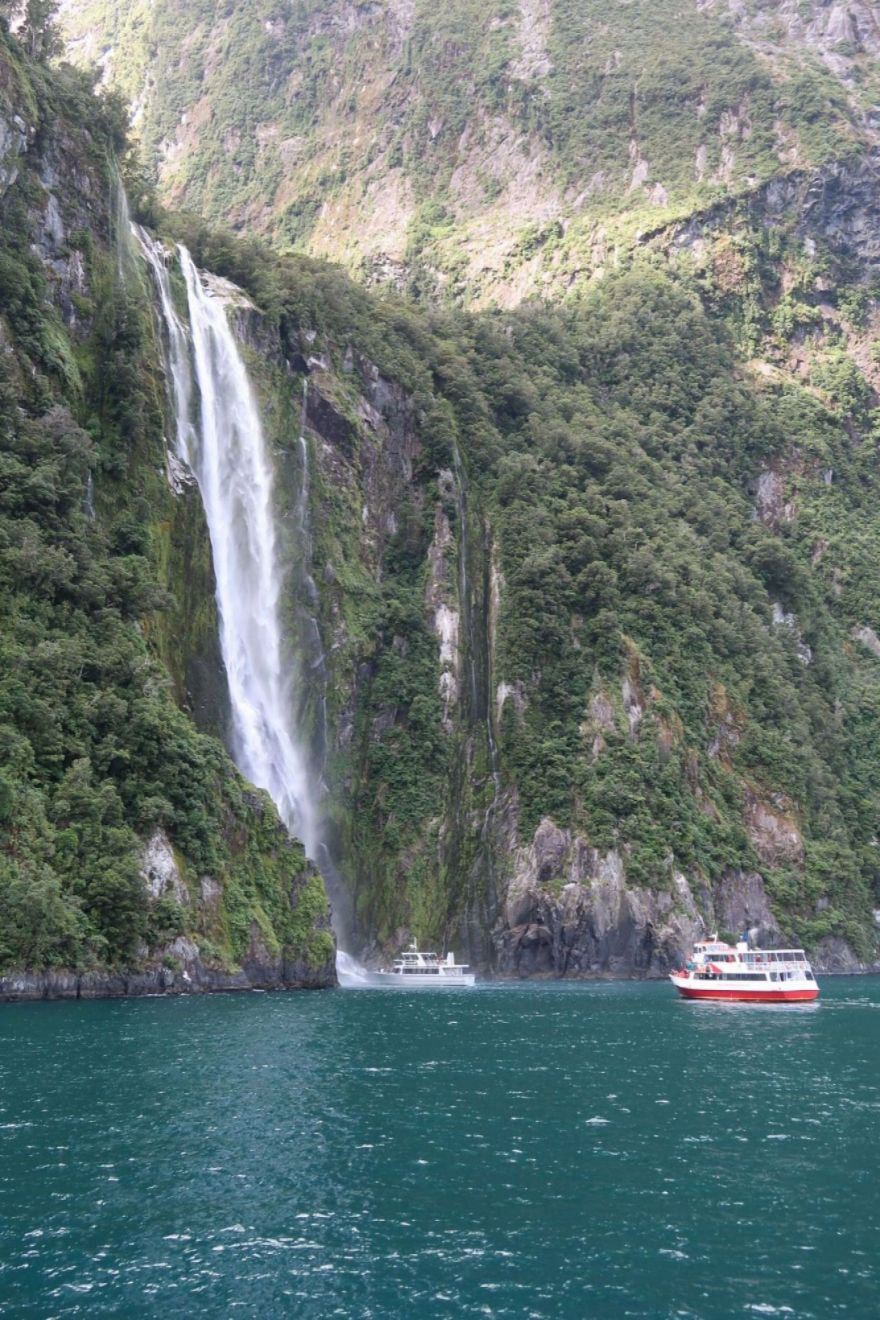 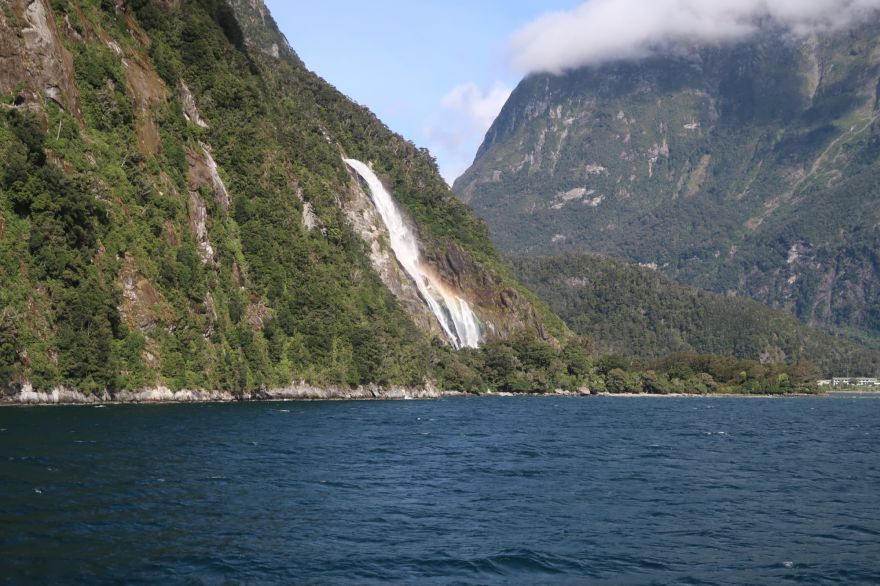 The cruise through Milford Sound took exactly two hours. Our bus was already waiting for us. On our way back to Queenstown, we made no more stops. Well, we did make a short stop in Te Anau. Around 8.45pm, we arrived in Queenstown. Almost 12 hours after we left Queenstown this morning. Meaning we spend most of the day in the bus. But was it worth it? Yes, definitely. Milford Sound is beautiful. But to call it the 8th World Wonder as some people do, no, we have seen other places in New Zealand that are just as beautiful if not even better.