We have to walk another 80 kilometer before we are at our destination: Bluff. Meaning we are almost done walking 3.041 kilometer from Cape Reinga to Bluff. Wow! We have heard stories of Te Araroa hikers who have completed this last stretch in one day, just to see how many kilometers they can cover in 24 hour. Crazy! We decided to take it easy, and will spread the following 80 kilometers on three days.

Yesterday, the Tavern in Colac Buy was pretty busy. Today, there is a surf competition in Colac Bay. As soon as we left Colac Bay, we continued our Te Araroa adventure along the Beach. There, we crossed the ‘festival’ area. We were greeted by a woman who just returned from the sea. It took a while before we realized that this woman was actually the bar girl from the Tavern. We passed a hot dog stand, but even for us, 9.30am is a little too early for a hot dog.
We left the crowd behind and continued along the beach. After a few kilometer, the beach ended. That is where the Tihaka Beach Track started. We followed a narrow path and climbed to the top of a cliff. On the other side, we descended back to the beach. This would be the standard for the next 6 kilometer: up and over a cliff and back to the beach. In between, we had to negotiate mud, high grass and especially marker pole that have been bleached by the sun. It was hard to actually spot the next marker pole. 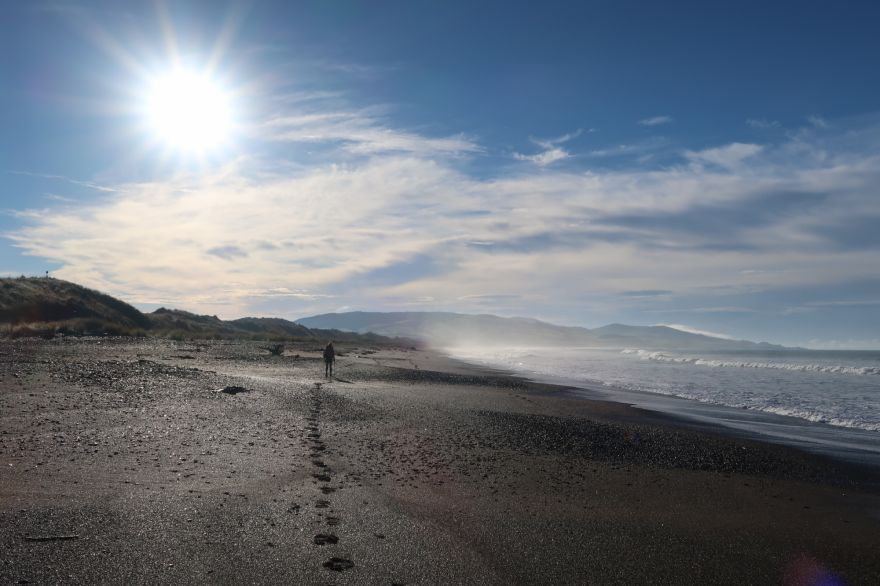 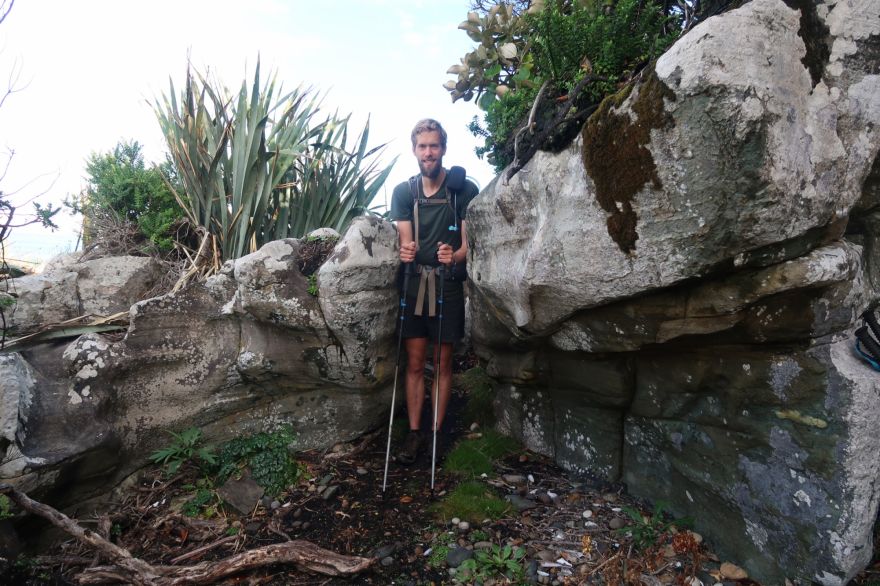 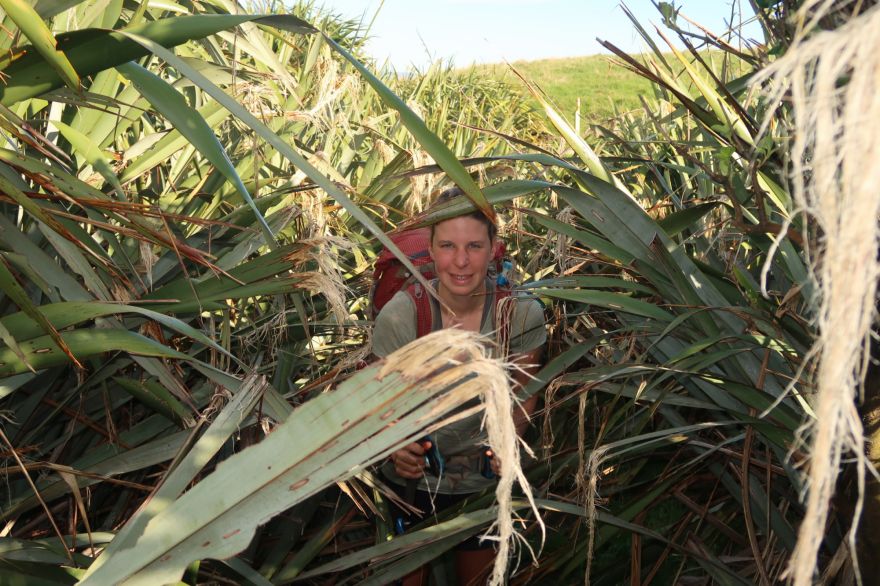 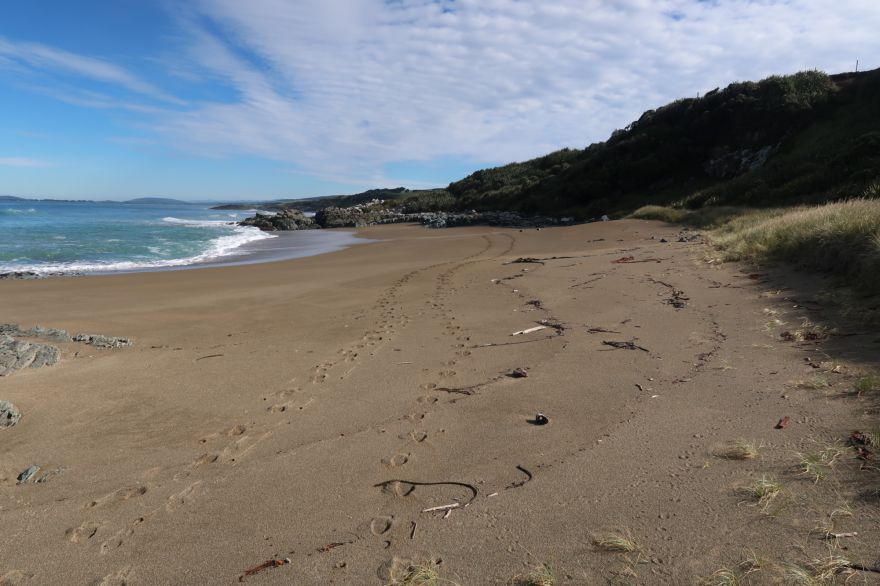 When we left de beach behind, the track climbed to 171 meter. There, we had an amazing view. We could clearly see the track we had just walked. But more importantly, Bluff looked to be so close! From the look-out, it was a short descend to Riverton. Although early, we called it a day. 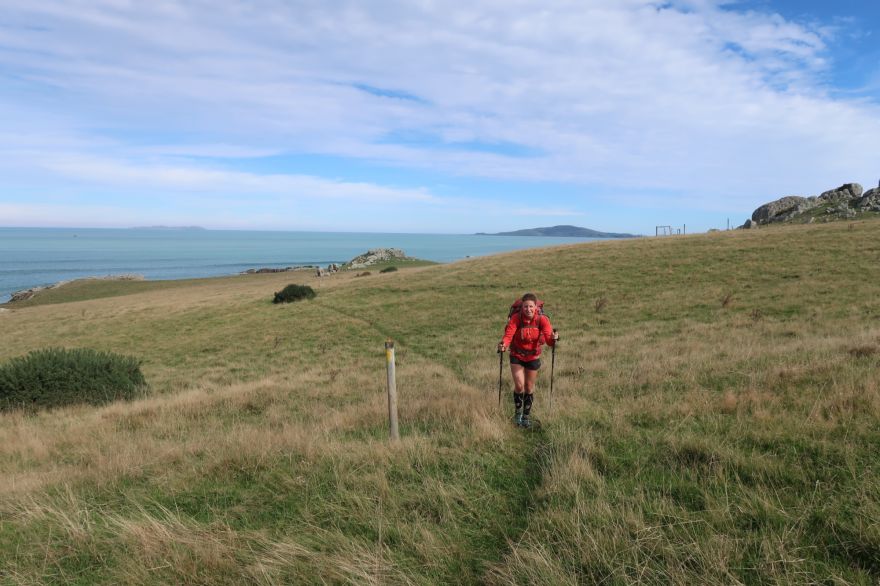 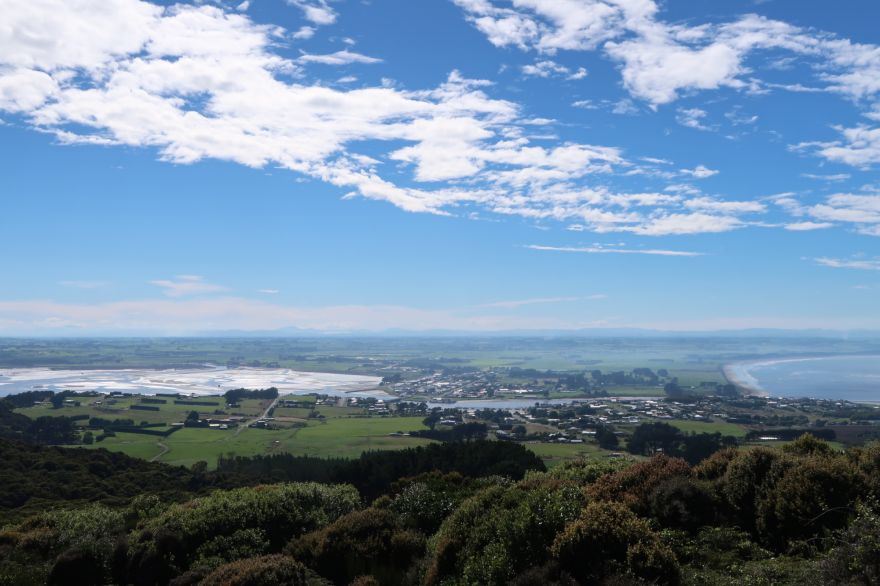 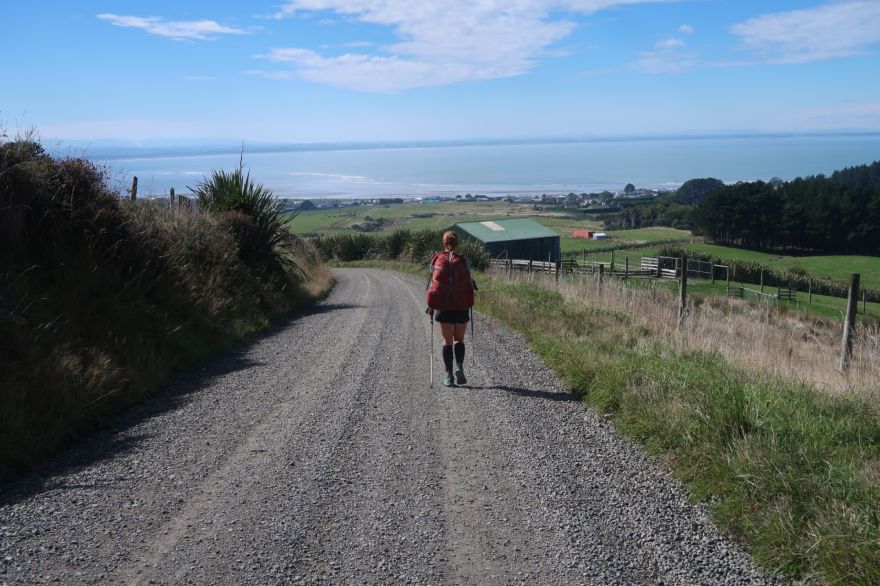 The Te Araroa started with 4 days of beach walking. Now we almost done hiking the Te Araroa, we have another full day of beach walking ahead. From Riverton to Invercargill, we have to walk about 22 kilometer mostly on the beach. Unfortunately, high tide was a 8am, meaning there would be literally no beach left to walk. Therefore, we enjoyed a second breakfast at The Crib Café in Riverton. With our stomachs full of fresh food, we finally left Riverton around 9am. We soon arrived at the beach, and there was just enough sand to walk. As we continued our way south, there was more and more beach to walk on. In comparison to 90 Mile Beach in the north, Oreti beach was pretty busy. Around noon, we saw many people riding their bike or walking their dog on the beach. 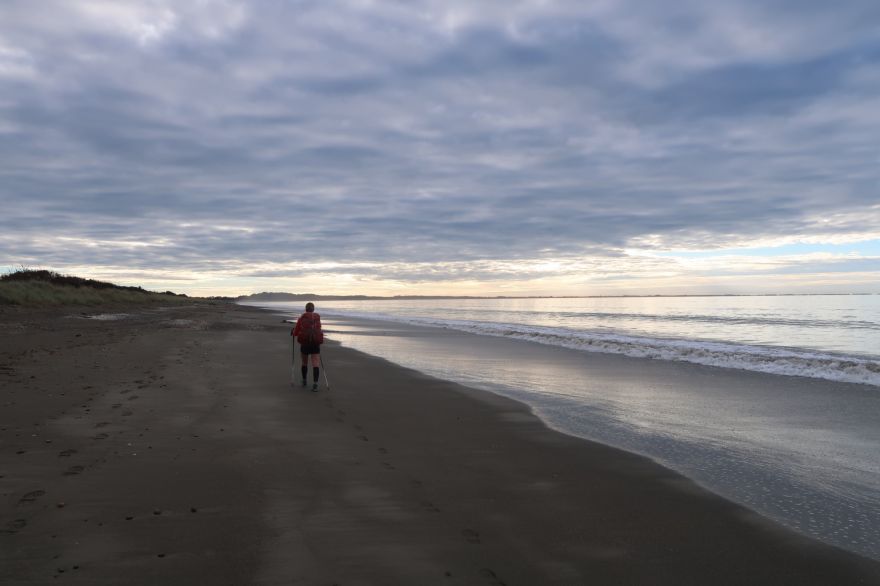 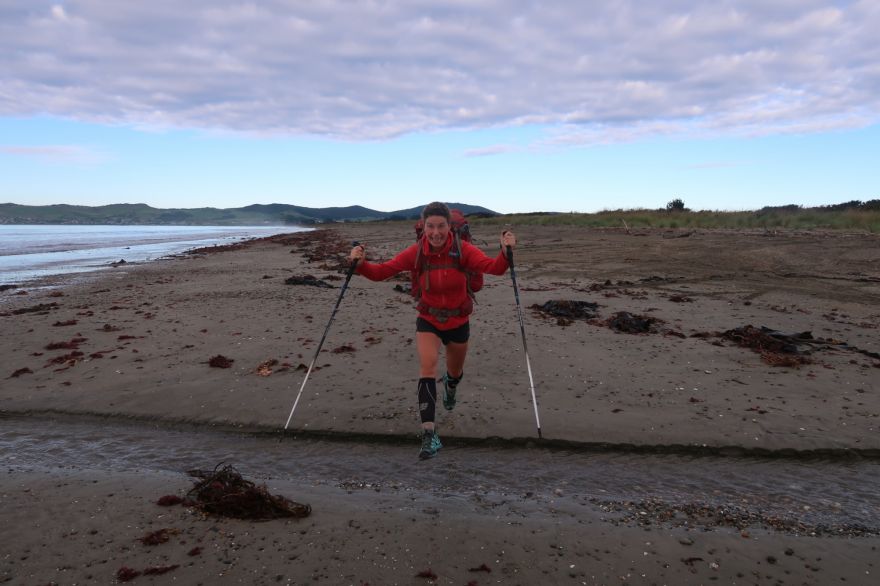 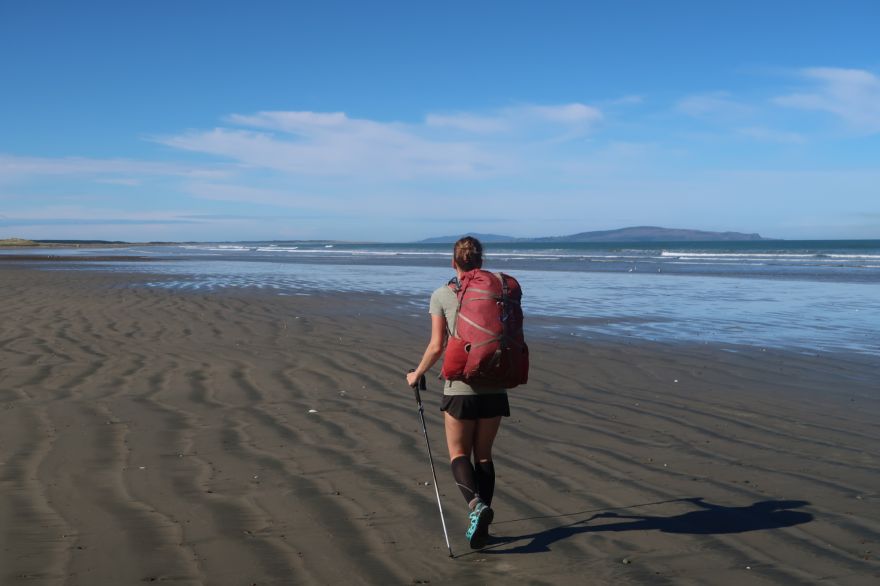 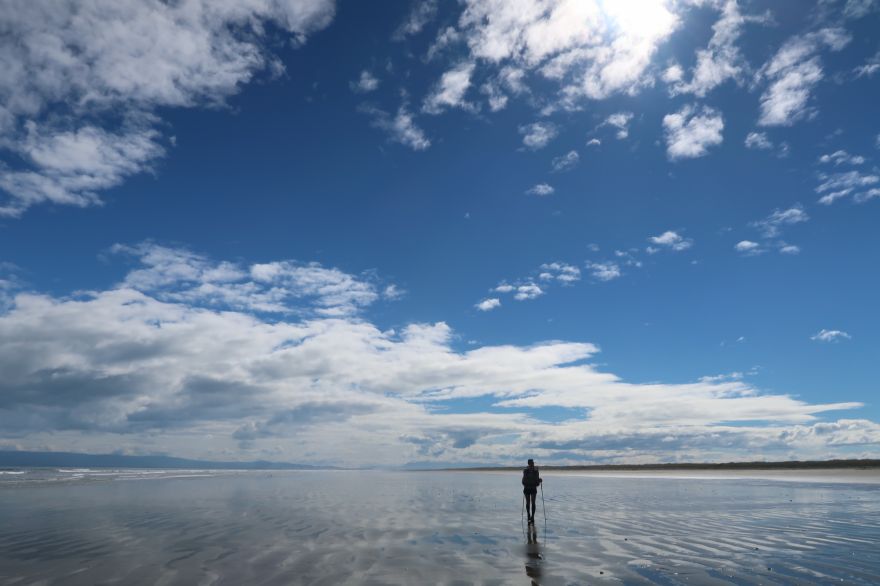 We left the beach behind and continued along the road for another 9 kilometer towards Invercargill. We took an ice-cream break at the Four Square we passed before continuing to Invercargill. We pitched our tent at the beautiful campsite in the center of the city… 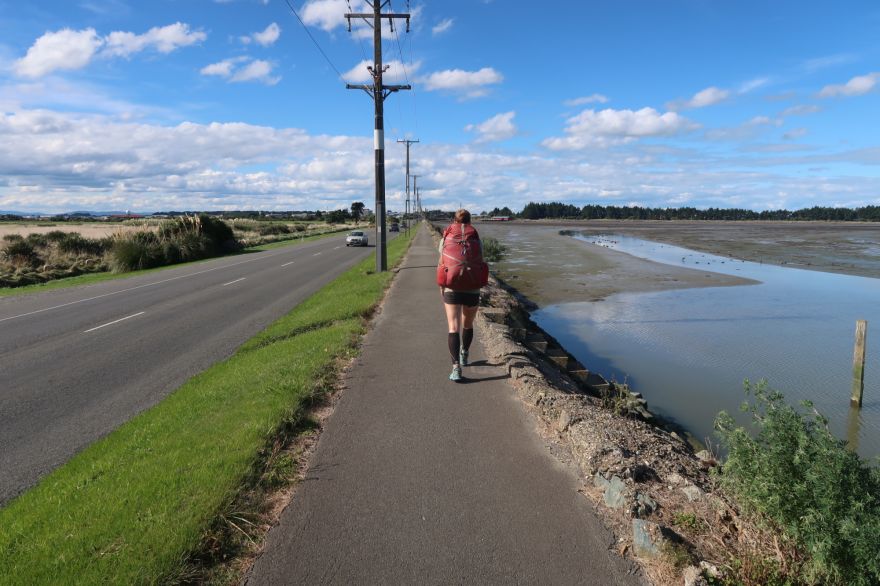 We woke up by rain falling on our tent. Not really how we planned to start our final day on the Te Araroa. We took our time packing everything, and by the time we were ready, it was dry again. We left Invercargill via the same road as we came yesterday. After a kilometer or so, we turned left and followed the Estuary Walkway. A new track that is still under construction. The first half of the tracks runs through nature and an industrial zone. We were warmly greeted by cyclists who cheered us on. But we are not there yet! After 10 kilometer, the Estuary Walkway ended and we arrived on State Highway 1. They are still working on an extension of the Estuary Walkway. For now, there is no other way south than to walk along State Highway 1. Not something we had been looking forward to as State Highway 1 is pretty busy. Too busy, if you ask us. We therefore decided to hitch to Bluff. Within 30 seconds, an old lady stopped her car for us. She could bring us to her home, which was 10 kilometer south along State Highway 1. That sounded great, so we quickly got in. While driving us south, she told about her work. ‘Oh, and that is my house,’ she said. She decided to bring us all the way to Bluff. Wow! She dropped us off at the welcome sign to Bluff. We took the obligatory photos and continued with the last kilometers of our walk. 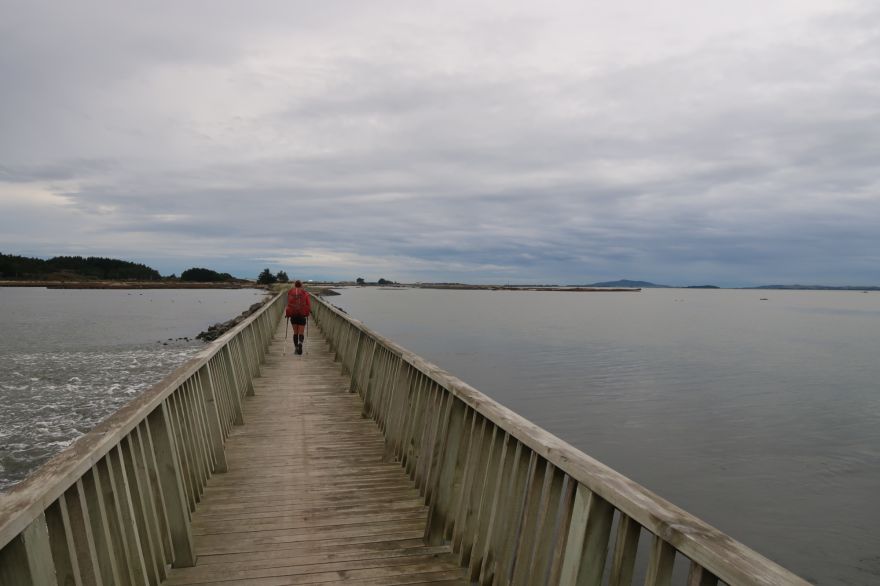 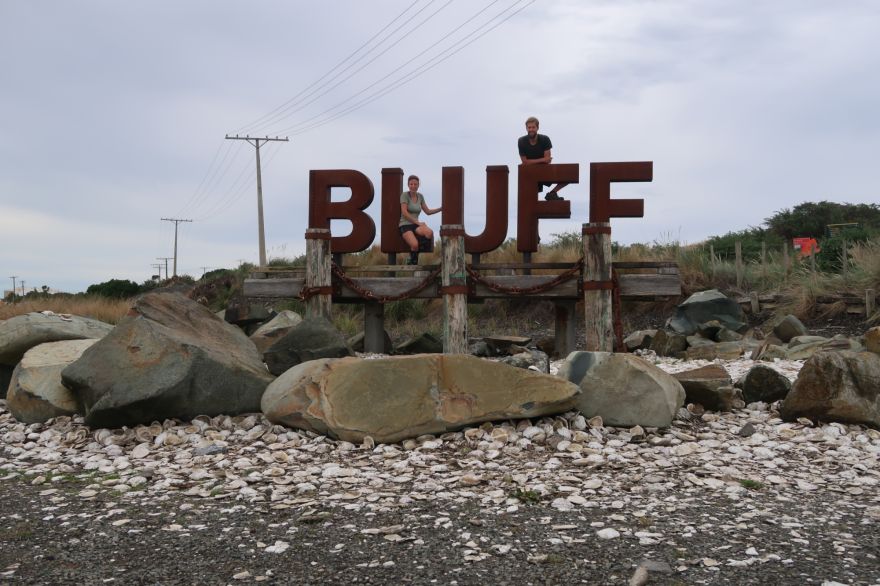 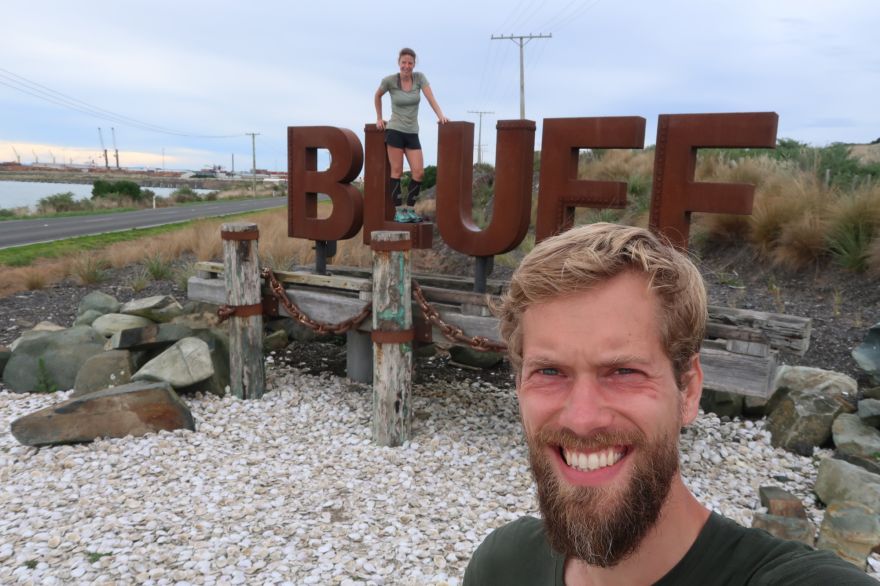 We followed State Highway 1 to the center of Bluff. From there, we followed a road leading to Bluff Hill. From the top of Bluff Hill, we had an amazing view. Too bad that the wind was blowing so strong today. We descended from Bluff Hill via the Topuni Track. A very easy walk down. In about 15 minutes, we arrived at Stirling Point, the official terminal destination of the Te Araroa. We made it! About 3.000 kilometer since we started our hike at Cape Reinga. What an adventure! 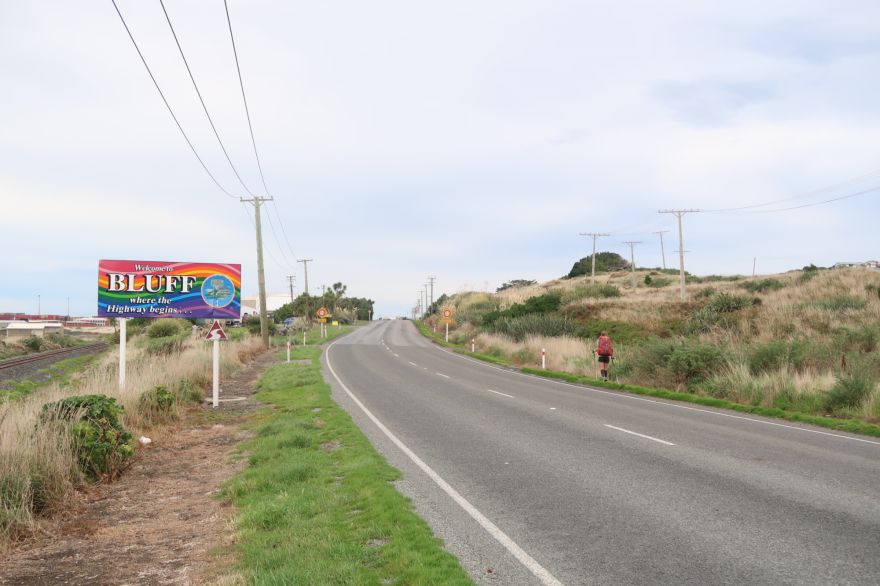 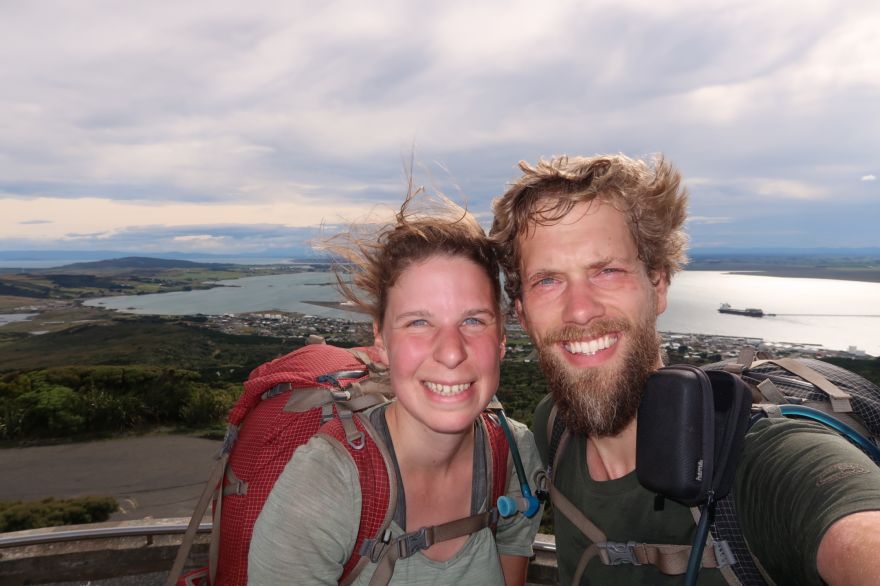 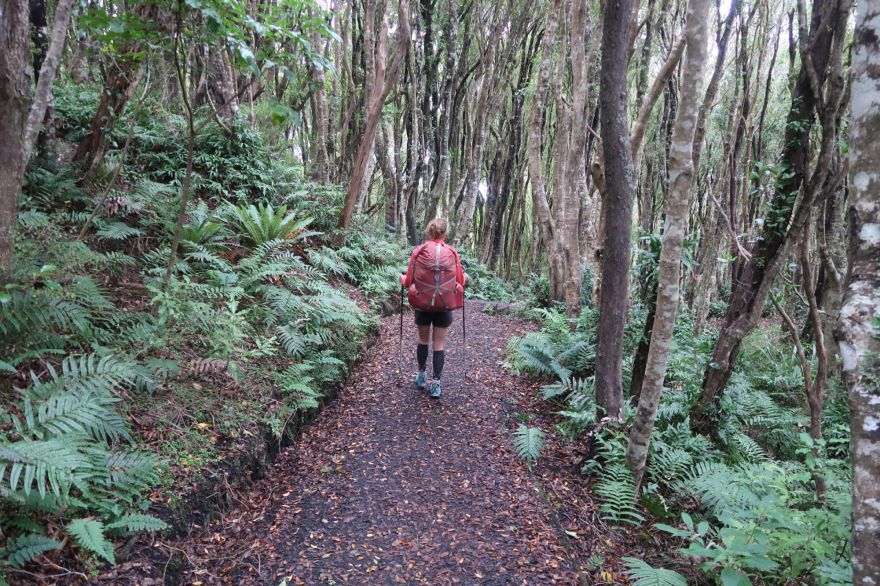 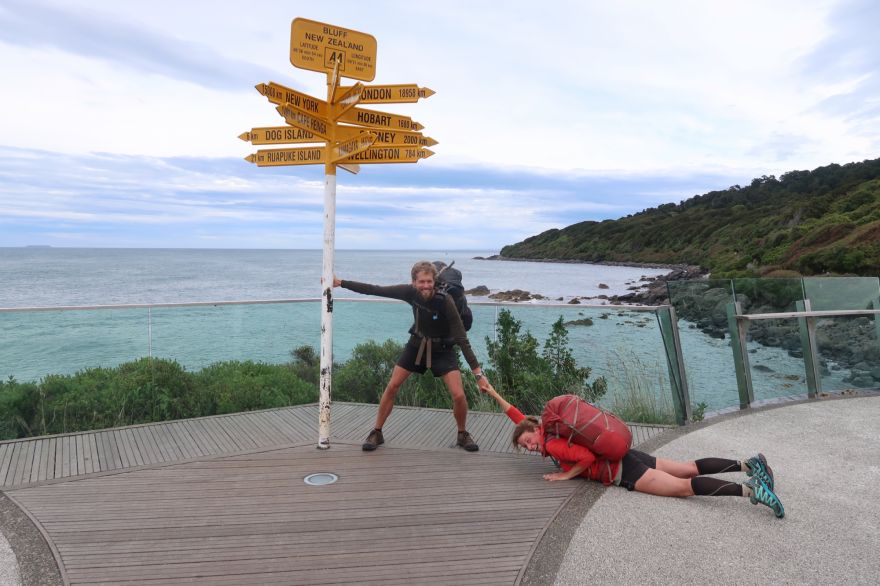 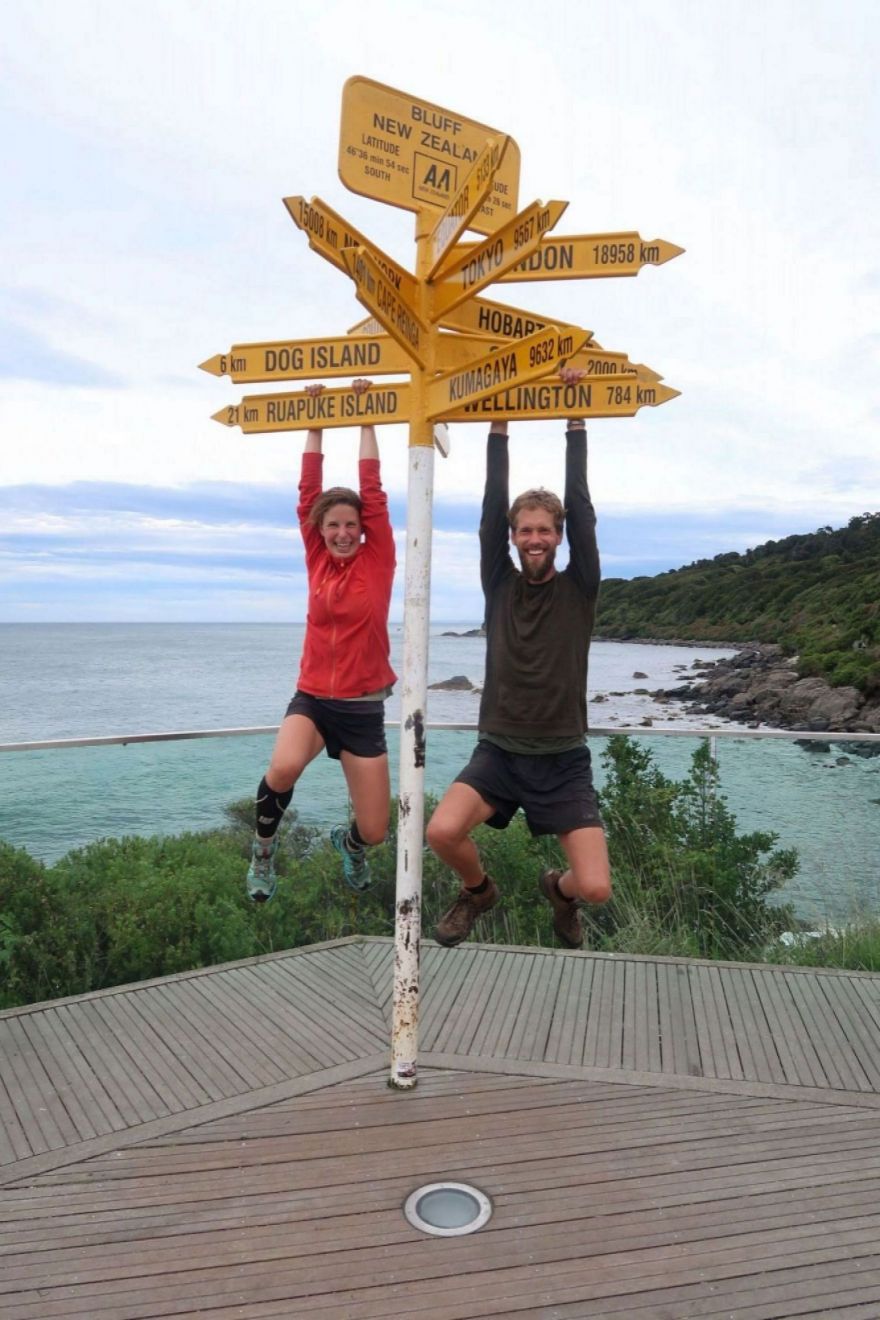 We celebrated our finish with a piece of pie at the Oyster Cove Restaurant & Bar. There, we also revieced a plaqua from the Invercargill City Council. After signing the Te Araroa book, we walked back to the center of Bluff to catch a bus to Invercargill, where we have booked a night in a fancy hotel. We have deserved that, we think! 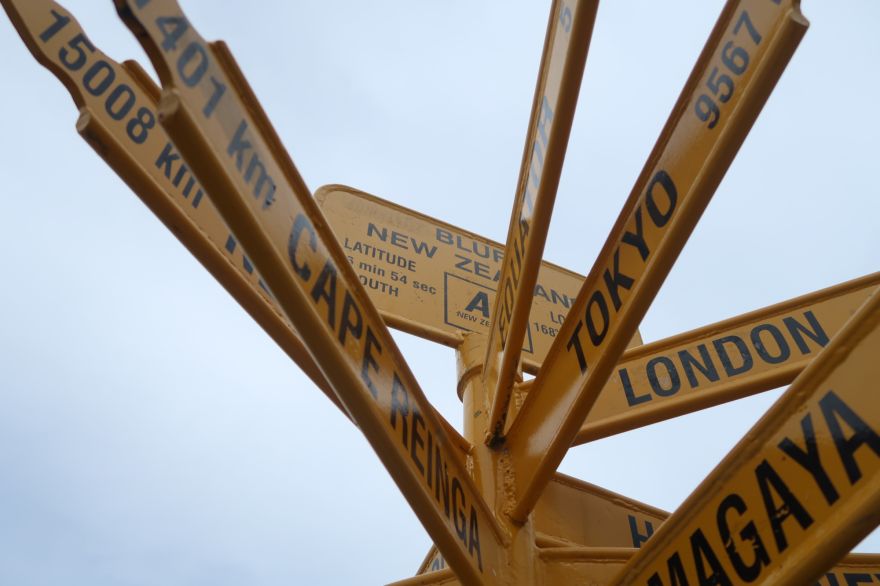 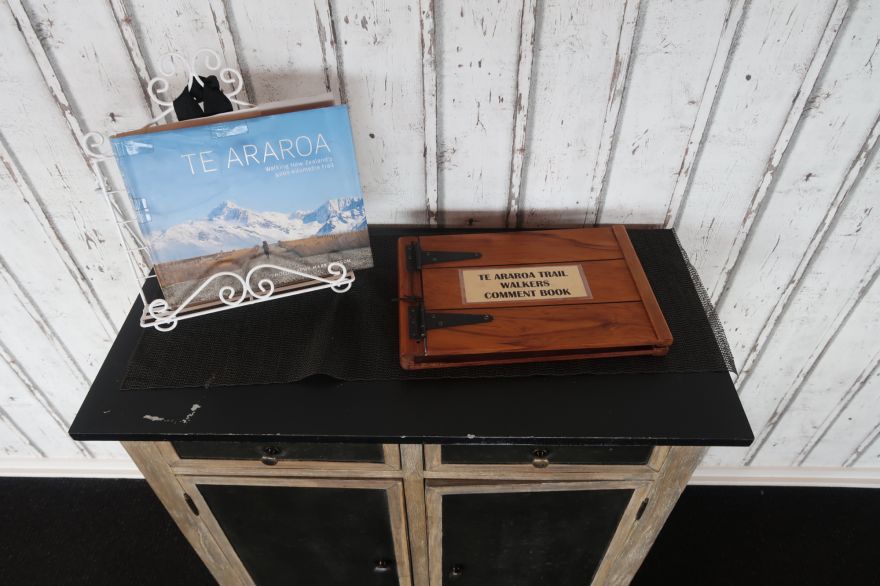 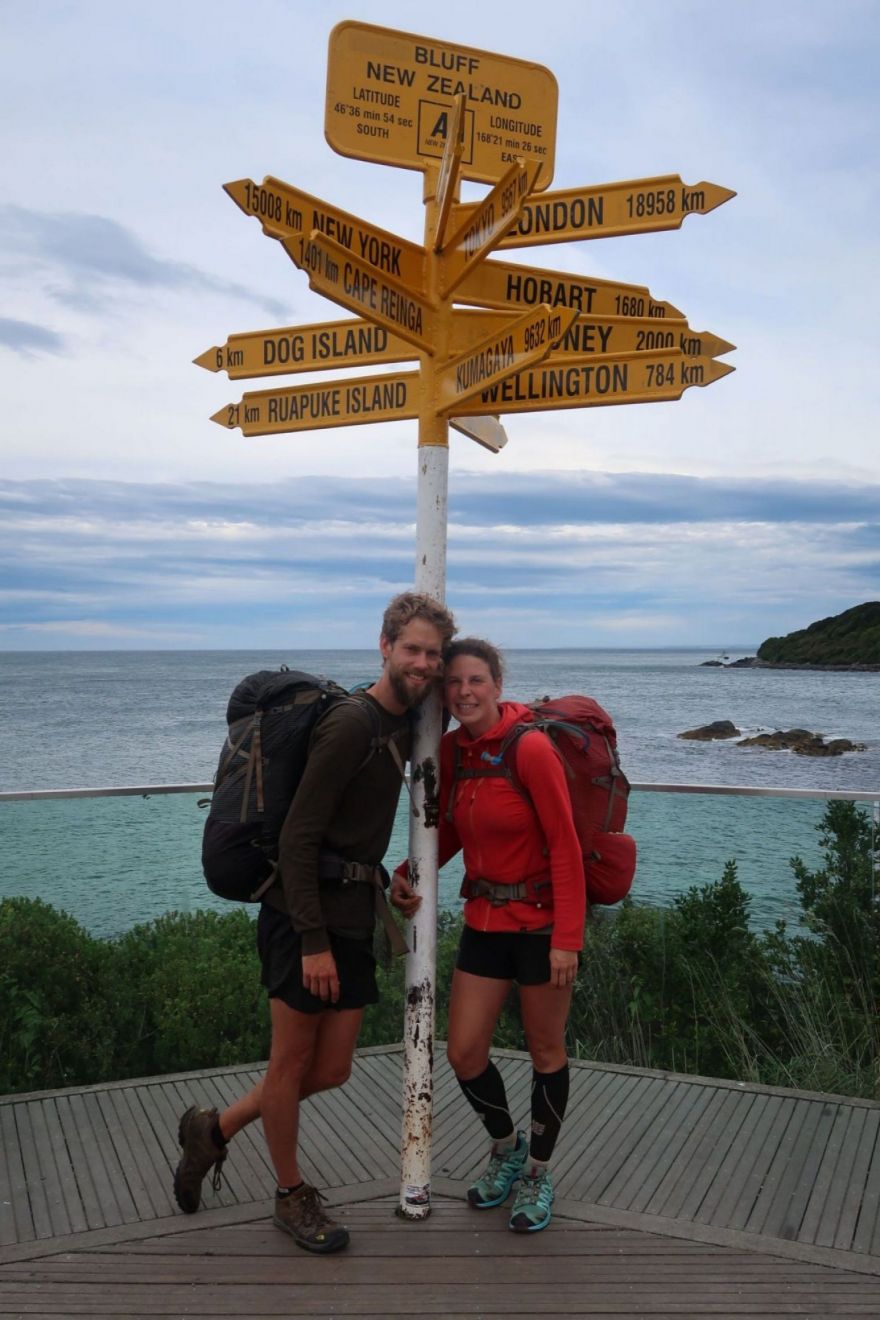