After a few more days of rest in Queenstown, Marjon her leg had improved significantly. We both had good hope we could continue and even finish the Te Araroa. Therefore, we booked a shuttle to the start of the Greenstone Track for the following morning.
Tuesday morning, the shuttle bus arrived right on time. For a moment, it was the question if we could get in as there was a group of eleven people that had actually booked for ten people. They, however, didn’t mind to squeeze in on the backseat. One-and-a-half hour later, we stopped at the Routeburn Shelter. The exact same spot where we were dropped off a few days ago. However, now we only drop off the other passengers. When everybody got off the bus, the shuttle continues to the Greenstone Carpark, another half-an-hour drive. It felt strange to be back at the carpark, just four days after bailing out.

At 10:30am, we left the carpark and continued our southbound Te Araroa hike. We took our time and enjoyed being back on the trail. Jasper stopped at every waterfall to take heaps of photos. In the end, it took us about 3 hours to get to the Greenstone Hut. It was still early, but we want to give Marjon her leg as much rest as possible. Although we wanted to continue, we decided to stay in the hut. The hut was already filled-up when we arrived (we claimed the last to beds). In the afternoon, we talked to a Canadian couple whom were also staying in the hut. They are hiking in New Zealand and on one of their first hikes, she had broken her arm. Just like us, they were glad to be back hiking. 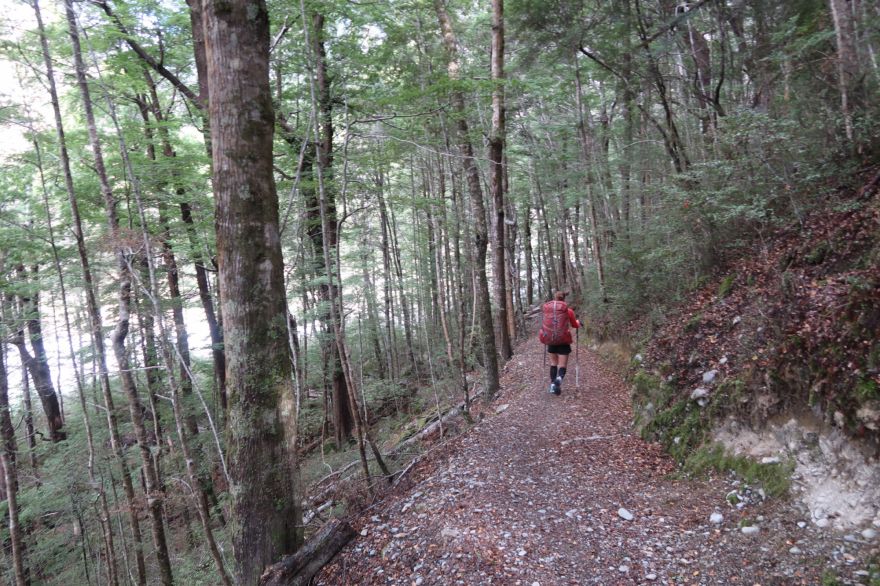 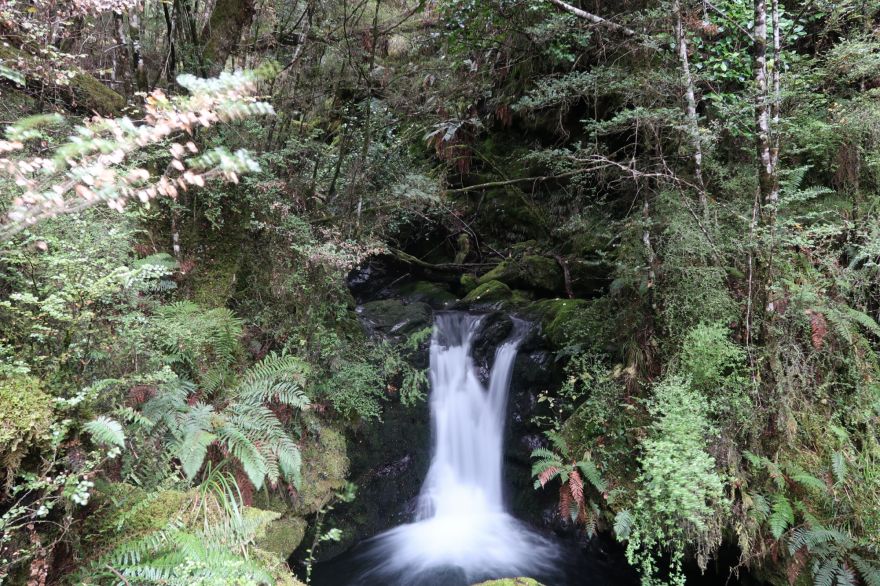 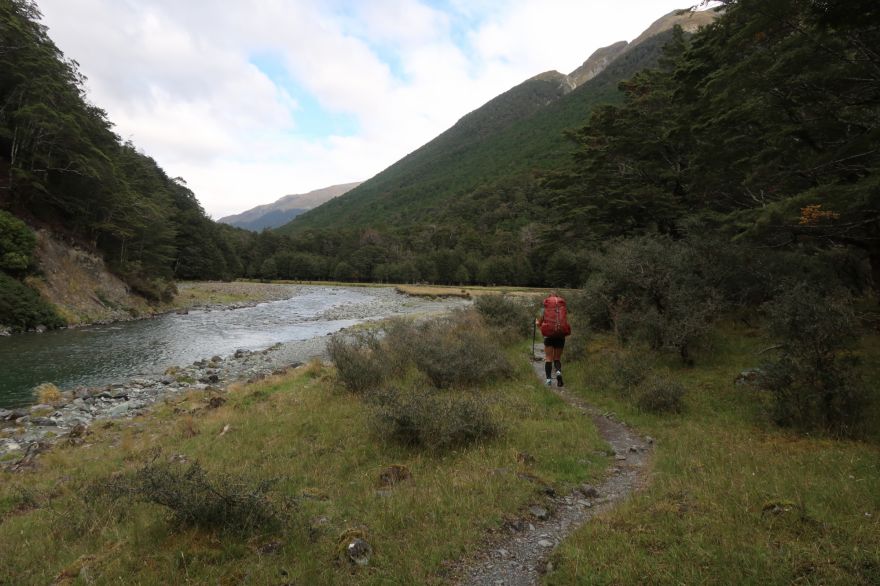 Back on the Te Araroa

This was one of the first times that everybody was up and running before it was light. Most people told us that they wanted to get to McKellar Hut. We think everybody was up so early because they just want to claim a bed at McKellar Hut. We, however, didn’t had anything to worry. We were the only Te Araroa hikers in the Greenstone Hut last night. Today, we will therefore leave the busy tracks around Queenstown behind. 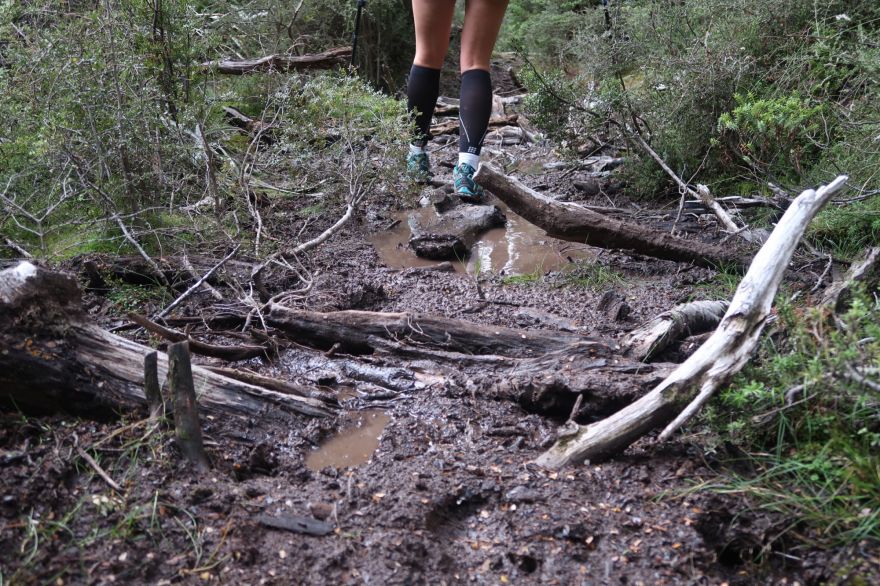 From leaving the Greenstone Hut, the track started to climb. Where the Greenstone and Routeburn Tracks were well maintained, we were now walking through deep mud again. Welcome back on the Te Araroa! After 2,5 hours, we left the forest behind and entered a wide valley. We followed a narrow track through high grass / tussock. At some points, it was rather difficult to follow the track, or we just lost sight of the marker poles and had to find our own way through the grass. Three-and-a-half hour after leaving the Greenstone Hut, we arrived at the Taipo Hut. Although it was early (11am), we took a long lunch break inside the hut. 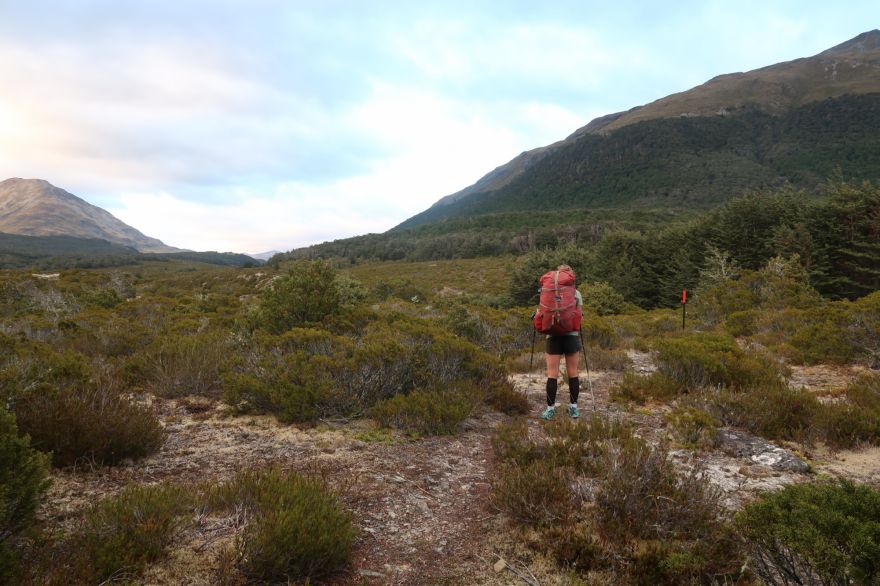 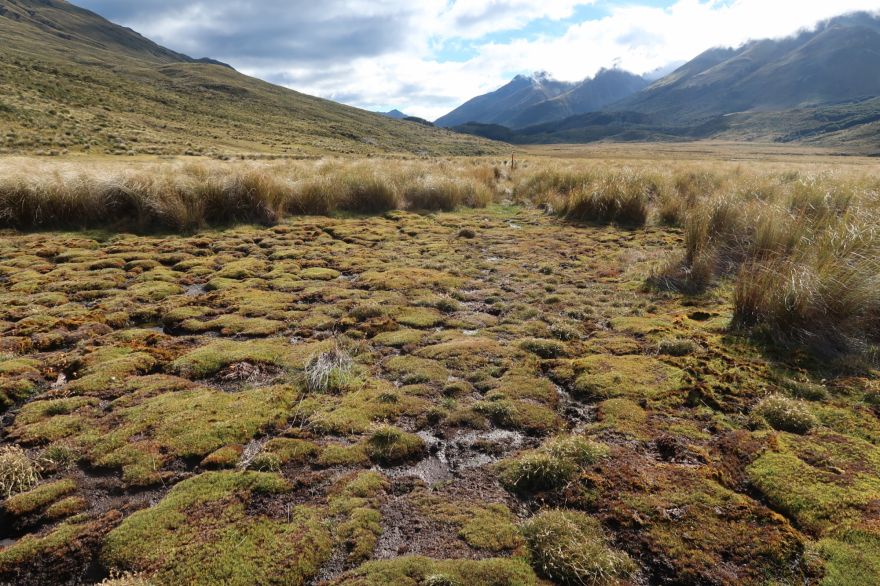 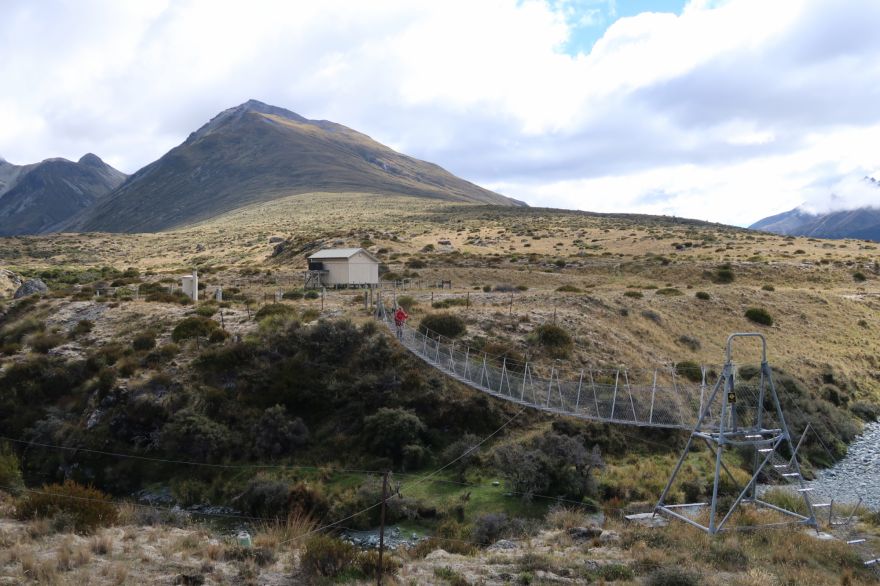 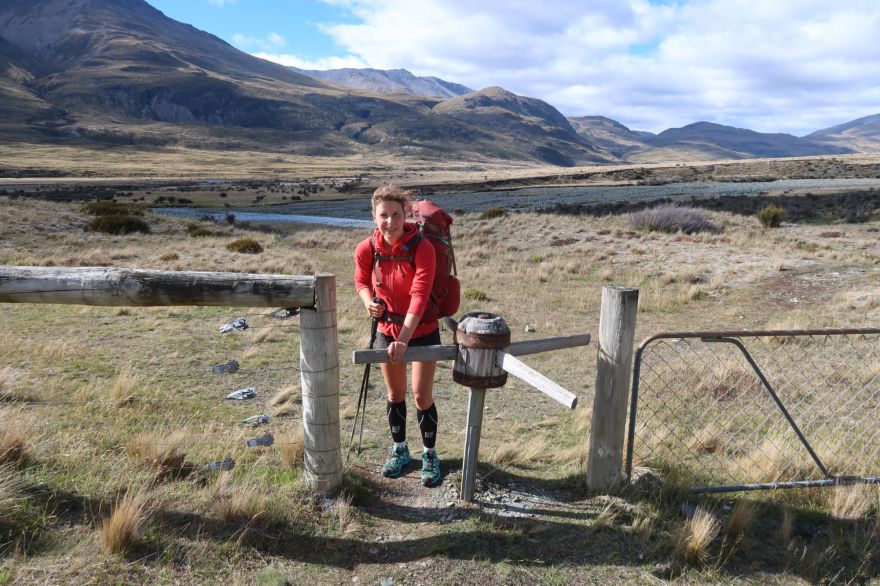 After our lunch, we continued south towards Boundary Hut. Twelve kilometer through the same valley. Beautiful! Just before Boundary Hut, a large herd of cows was standing on the track. However, the valley was wide enough to circle around the cows. Three hours after leaving Taipo Hut, we arrived at Boundary Hut. Well alsmost. There was only a river we had yet to cross. We followed the track for another half an hour along the river and finally arrived at the suspension bridge that brought us to Boundary Hut. Boundary Hut is a small hut (4x 1,5 person beds) where we decided to stay for the night. For the first time on the Te Araroa, we had the hut for ourselves! 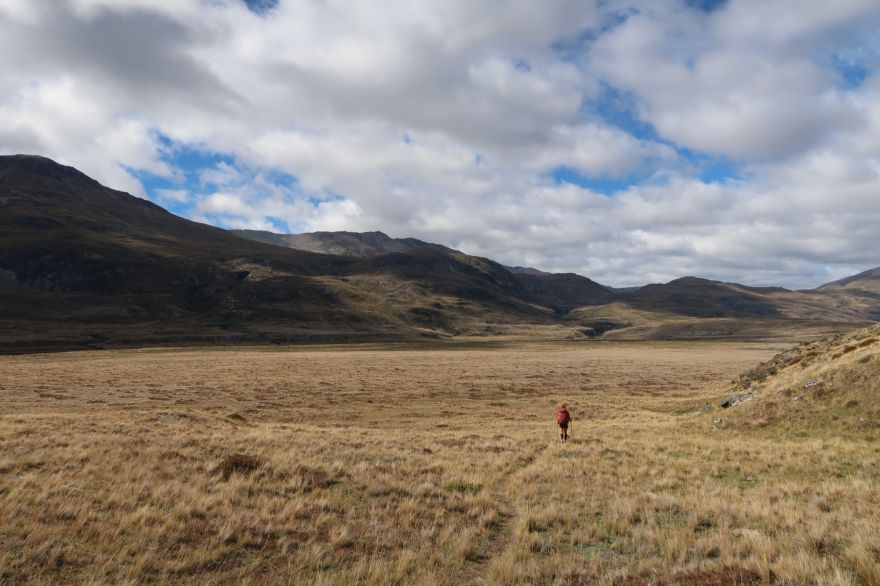 A lot of rain was predicted for Thursday. We were therefore prepared for the worst. However, when we left Boundary Hut, it was still dry. From Boundary Hut, we followed the 4x4 track in southerly direction. With a strong wind blowing from the north, we were able to make good ground. Because we just had to follow the 4x4 road, we had plenty of time to look around. And damn, what a pretty scenery. One of the best valleys we have seen so far! 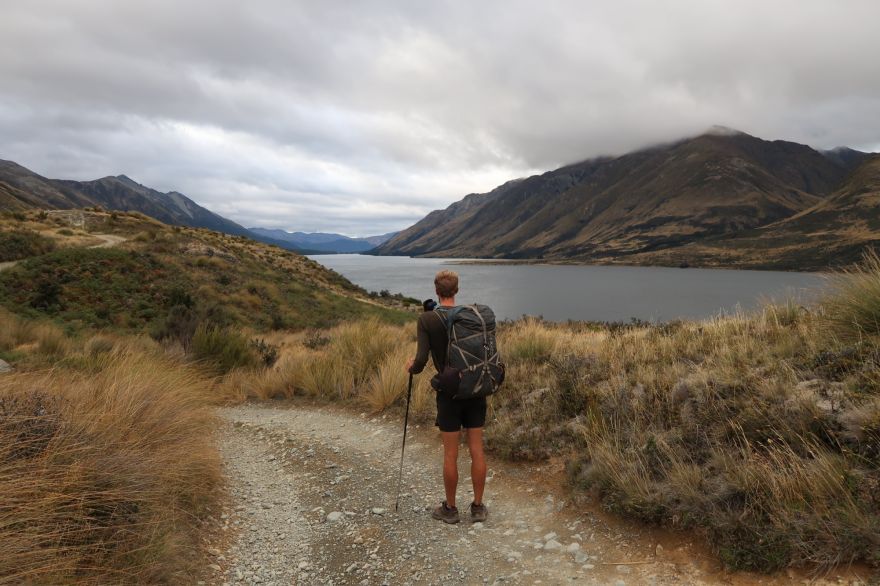 One hour and twenty minutes after leaving Boundary Hut, we arrived at Careys Hut. We took a short break before continuing south along the shore of North Mavora Lake. We still followed the 4x4 track, meaning the kilometers flew past. Two hours later, we arrived at the DOC Campsite. Although early, we stopped for a lunchbreak. Primarily because we couldn’t resists the beautifully places picknick tables. However, as soon as we sad down, we were attacked by the ever annoying sandflies. We had to put on all our rain gear to protect ourselves from the sandflies.
After our lunch, we continued towards South Mavora Lake. We crossed a suspension bridge to follow the track on the other lake shore. Although this was a tramping track, it was still well maintained. After an hour and ten minutes, we arrived at the next suspension bridge. While enjoying an apple, we discussed what to do. Officially, the Te Araroa continued on the true right side of the river. However, with the current water level, we knew it would be hard to cross the river by foot. Another option is to cross the river and follow the road. We decided to continue on the true right side of the river until the last suspension bridge and then walk to the road. We therefore continued along the Mararoa River. After 5 kilometer, we passed a small stream where we saw a great spot to set up our camp for the night. By that time, we had covered 26 kilometer. Marjon her leg was still feeling good. 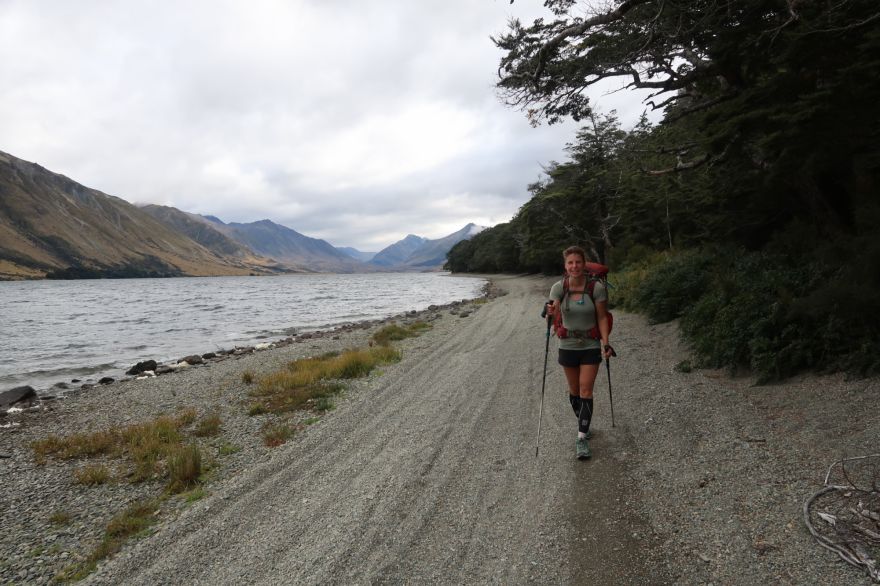 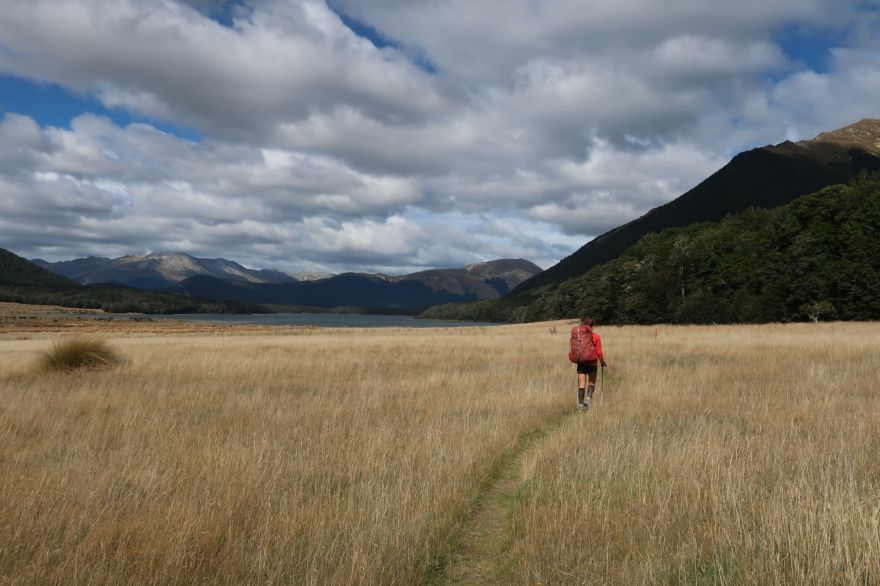 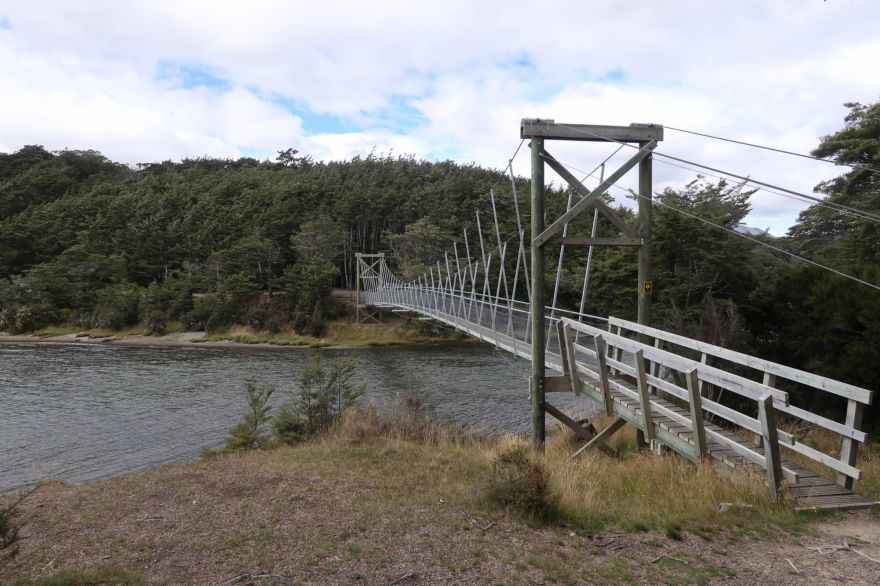 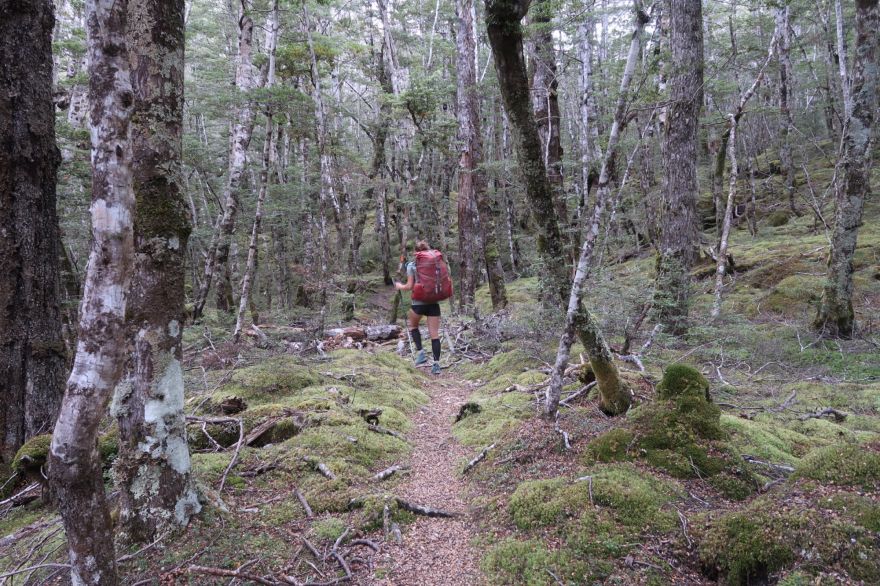 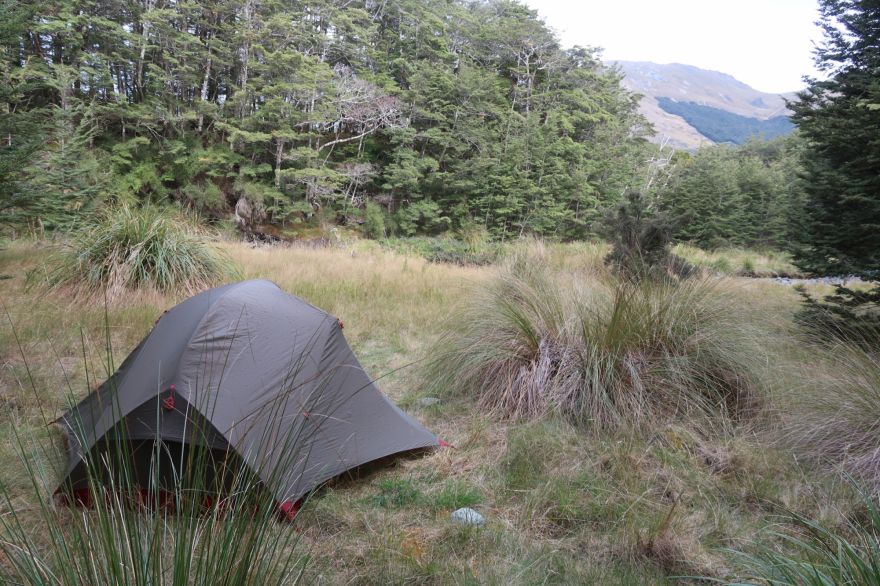 The rain that was forecasted for Thursday, finally arrived in the evening. Just after we went to bed, it started pouring. We could hear the small stream close to our tent getting stronger and stronger by the hour. It was not really a surprise when the water level in the small stream was much higher the following morning. We knew it would definitely not be possible to cross the Mararoa River after this amount of rain. After we packed everything, we followed the track on the true right side of the river. After 2,5 kilometer, we arrived at the last suspension bridge over the Mararoa River. Without further discussion, we crossed the bridge and continued south on the road. Because this was a pretty boring road, we decided to try and get a ride. The first car that approached us did stop, but had no free space for us. The following to cars (campervans) didn’t even slow down. We continued for 3,5 hours on this road and didn’t see another car. We shortly stopped on the side of the road for our lunch before continuing south. We almost reached the State Highway when saw another car coming our way. This time, the car did stop and the German guy offered to bring us to Te Anau. It only took about 15 or so minutes before we arrived in Te Anau. We were dropped at the supermarket. First thing we did was to check for accommodation. But unfortunately, everything was fully booked. Luckily, the campsite still had space for us. 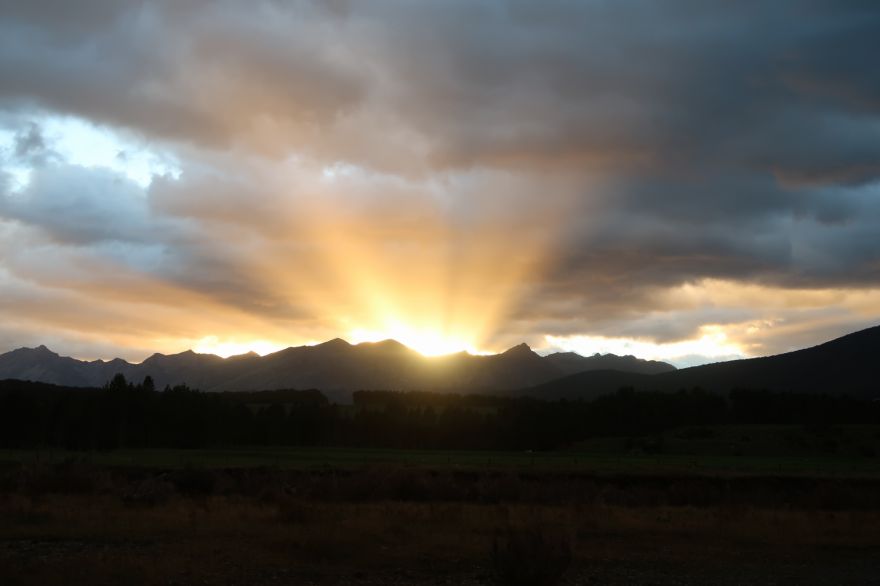 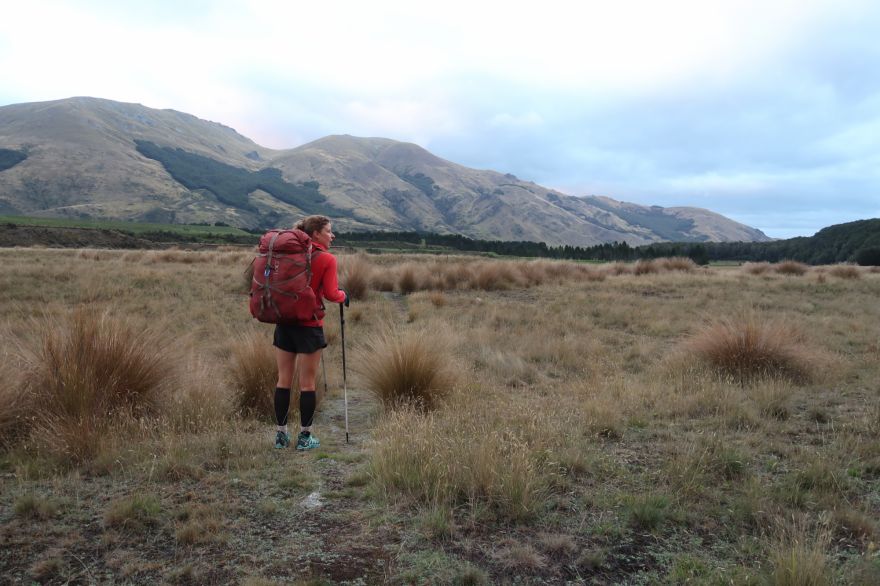 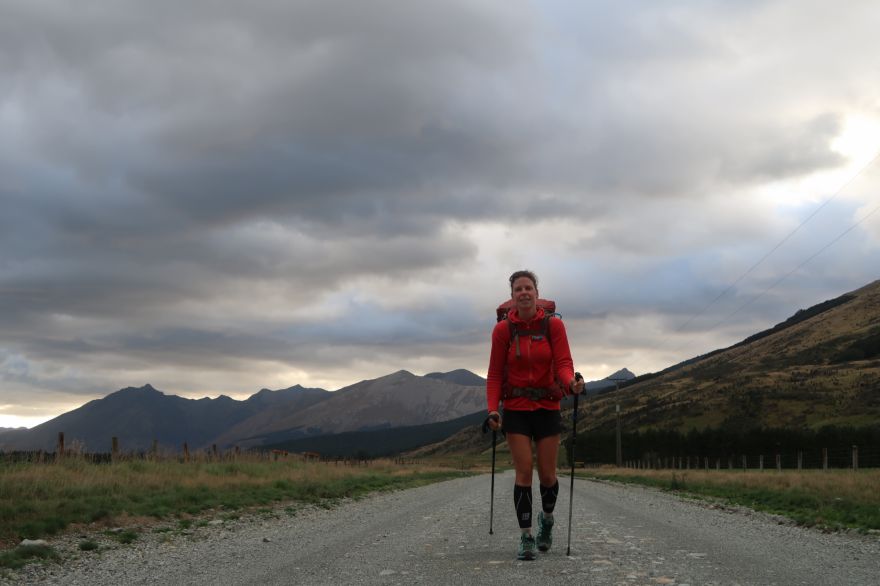