During our descend from Stag Saddle, we had a clear view at the highest mountain of New Zealand. Unfortunately, the Te Araroa doesn’t get any closer to Mount Cook than the view from Stag Saddle. Therefore, we decided to visit Mount Cook National Park from Tekapo. Tuesday morning, we took the bus from Tekapo to Mount Cook. After two hours, we arrived in Mount Cook Village. At the local DOC office, we asked if there was any availability at Mueller Hut. But as expected, Mueller Hut was booked out for the next few days. However, they told us that we can also camp at Mueller Hut. We didn’t know that, but that are campsites where you are allowed to camp for only 15 dollar per night. However, we are not going there, yet. We heard another couple asking for the availability of Ball Shelter for tomorrow night. We therefore asked if Ball Shelter was still available tonight. And it was. Today, we will be going to Ball Shelter and tomorrow to Mueller Hut.
We left Mount Cook Village and walked along the main road towards Blue Lake. We had good hope a car would stop and offer us a ride. Unfortunately, nobody stopped and we had to walk 10 kilometer to get to Blue Lake Shelter. After a short lunch break, we continued to Ball Shelter. We followed an old 4wd track. On our left, we saw a mountain and on our right we saw a moraine wall. Not the view we had hoped for. After about an hour, we finally got a view of the Tasman Glacier. What we saw was a large grey plain. Looking closer, we realized it was actually ice we were looking at. We walked parallel to the glacier for a little while. We had to cross a massive unstable slip, just before we arrived at Ball Shelter. Ball Shelter is a tiny shelter and only suitable for 3 persons. From the shelter, the views are really awesome. With the Tasman Glacier at only meters away and high mountain all around, we have had worse locations to spend the night. Sitting outside the hut, we heard the constant moving of the glacier (about 1 meter per day). While we were eating our dinner, we were joined by a group of kea’s. Large birds that are also referred to as mountain parrot. They eat everything they can get hold of. Just after we had finished our dinner, the hut radio started to make some noise. First, they read the weather report. Second, every hut was called to check if everybody had arrived safely. After a while, we were also called to check if we had arrived. The rest of the evening, we spend reading and photographing the night sky. Very impressive. 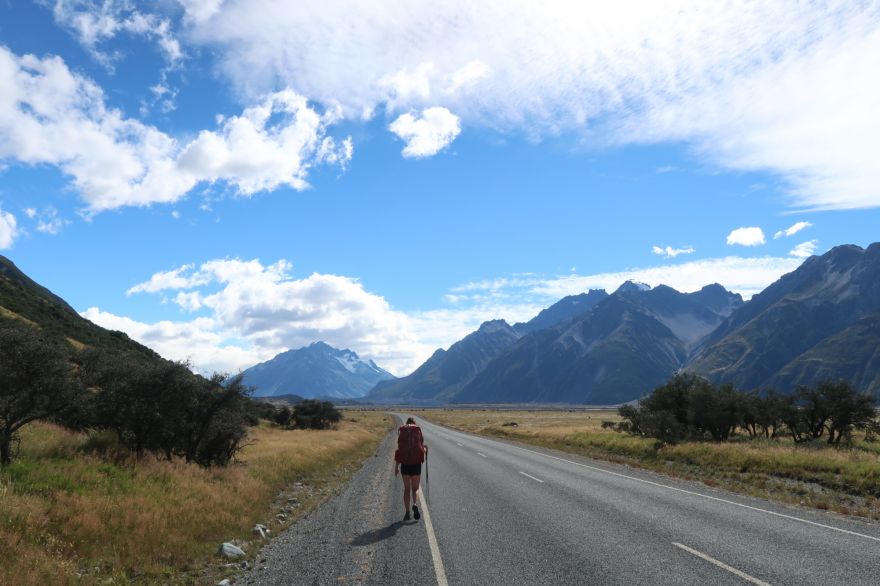 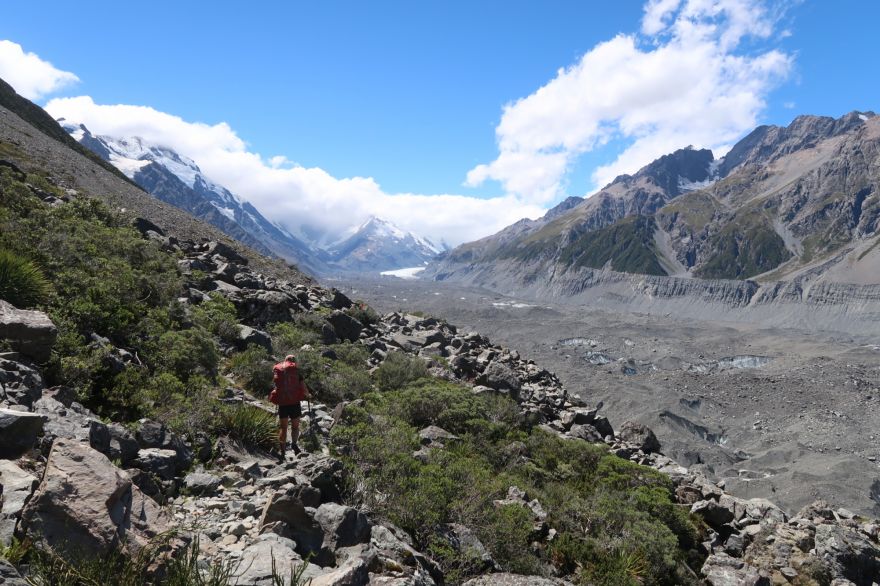 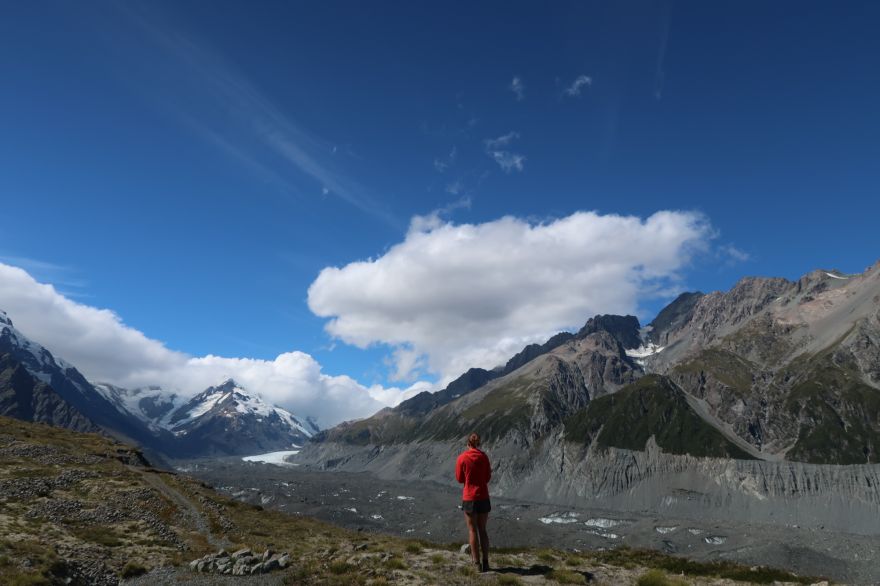 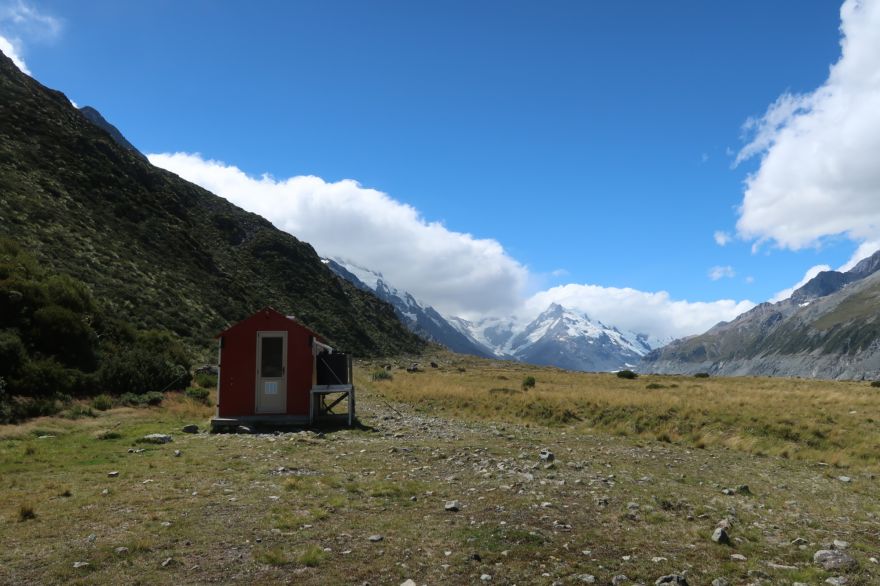 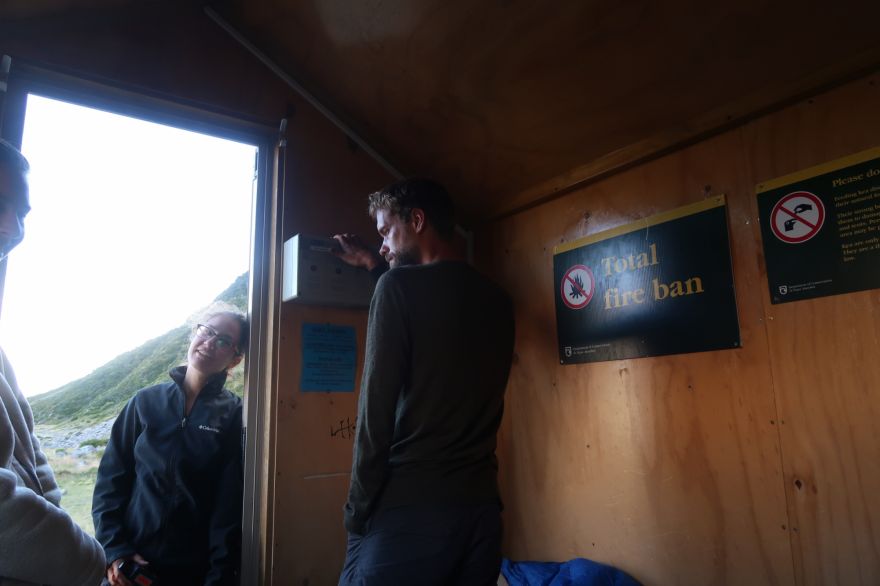 We left Ball Shelter the next morning around 7am. We followed the same track as we had came the day before. After about 2,5 hour, we arrived at the Blue Lake Shelter. We didn’t look forward to walk the road to Mount Cook Village. Marjon therefore approached a couple and they were willing to drive us to the village. It was their last they in New Zealand and they were about to drive to Christchurch. Even though they were not planning to go to Mount Cook Village, they did bring us all the way to the DOC office. From Mount Cook Village, it is ‘just’ 5 kilometer to Mueller Hut. However, the first kilometer is nearly flat. We therefore had to climb 1.000 meter in 4 kilometer. Not really pleasant, especially as it was the warmest time of the day. However, the rewards once you reach the top is worth it. We had an amazing view at snow covered mountains around, including a clear view at Mount Cook itself. 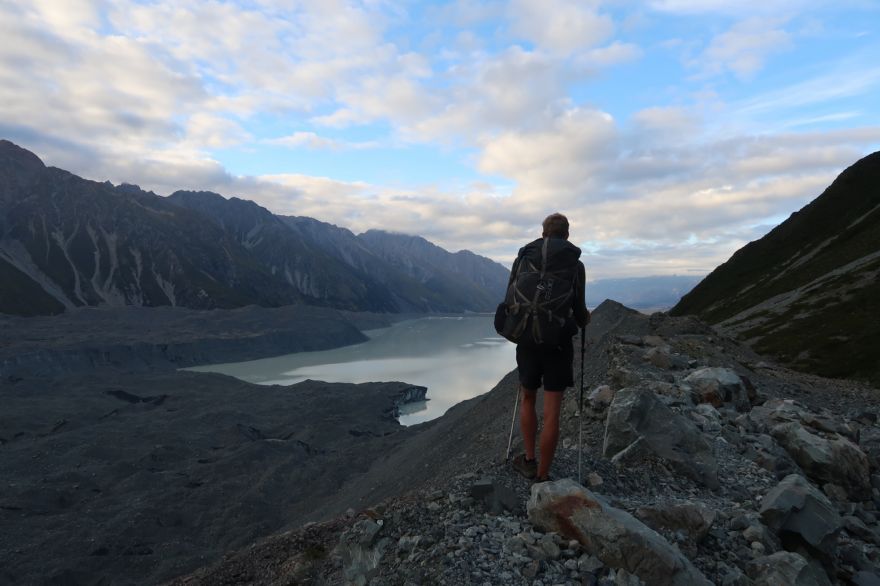 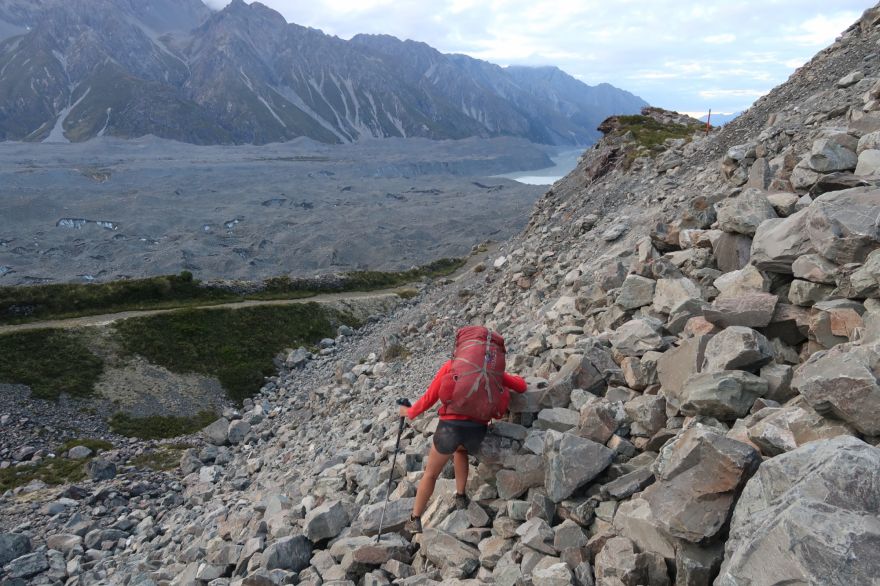 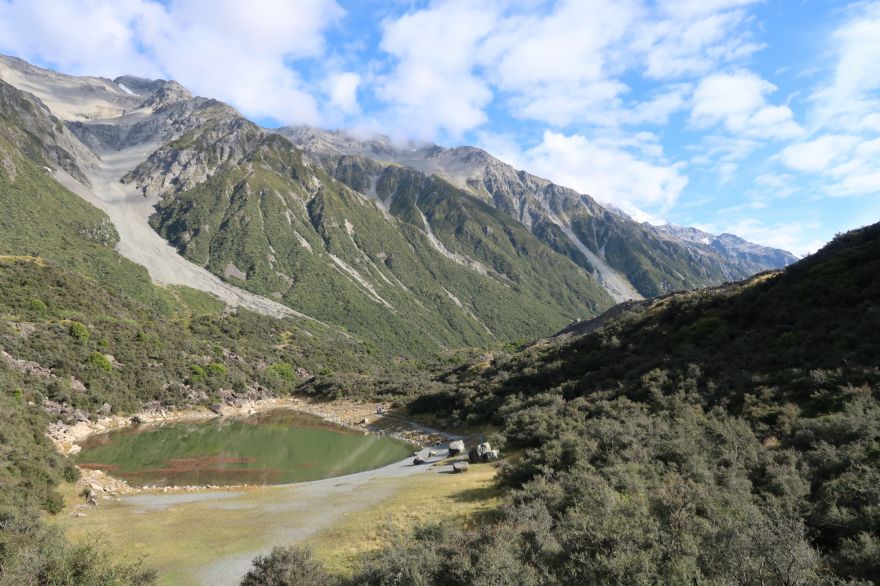 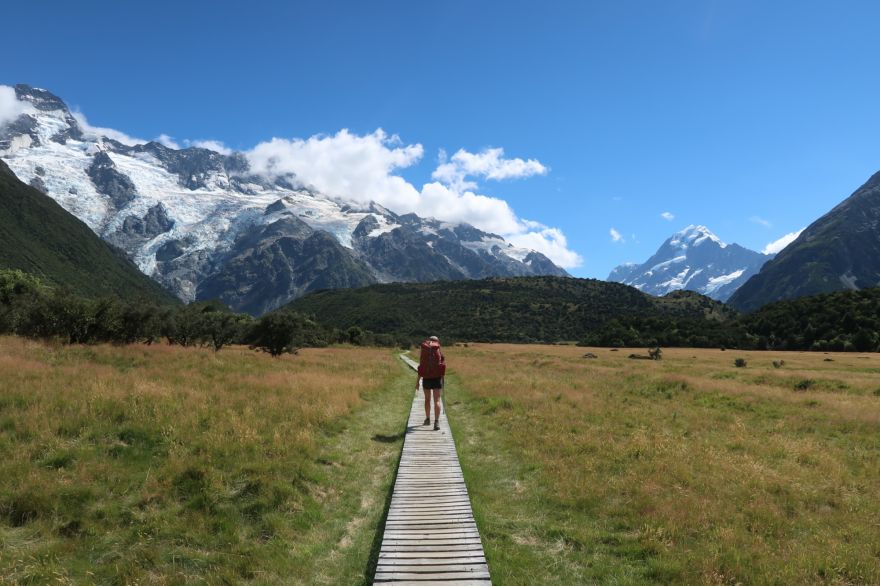 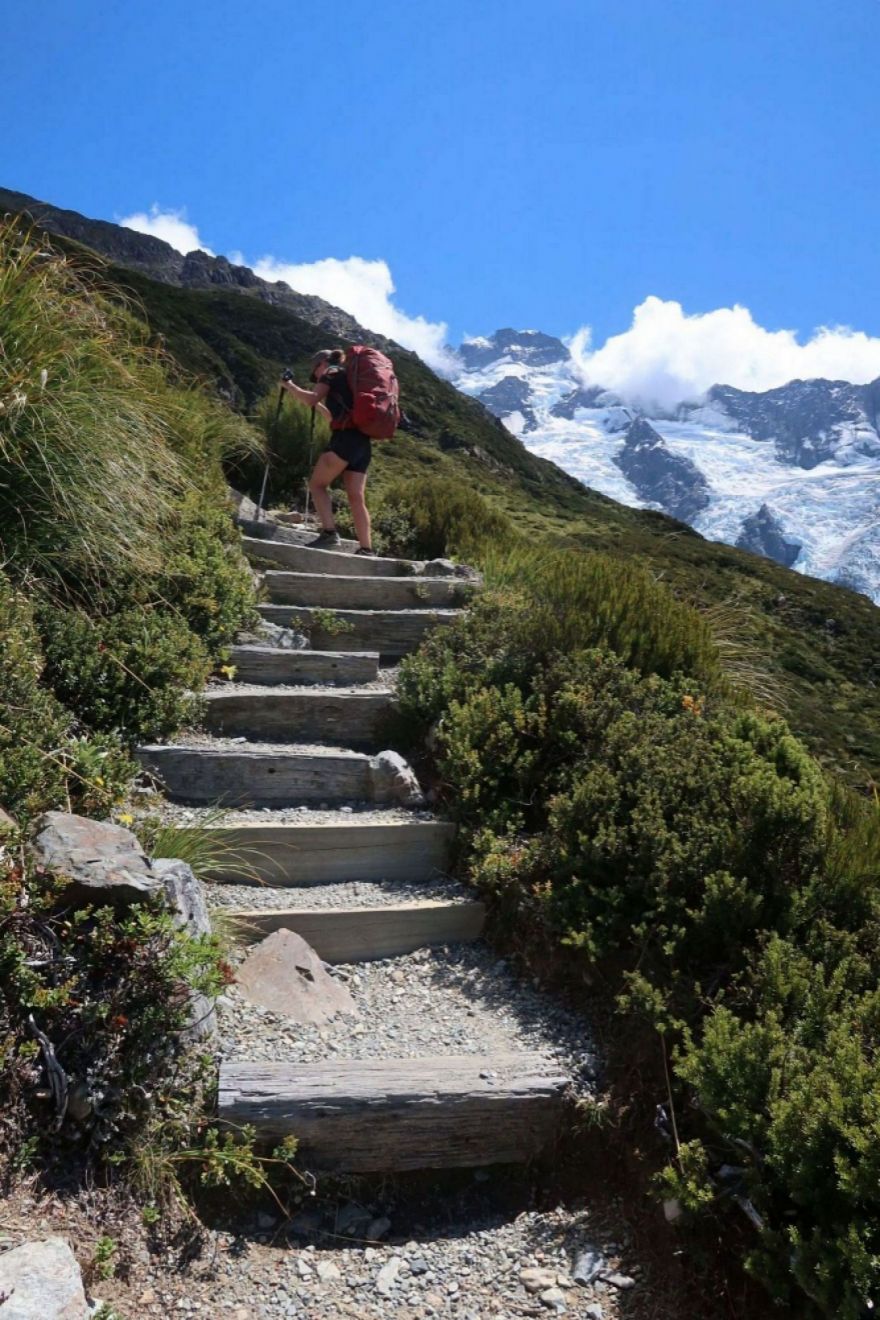 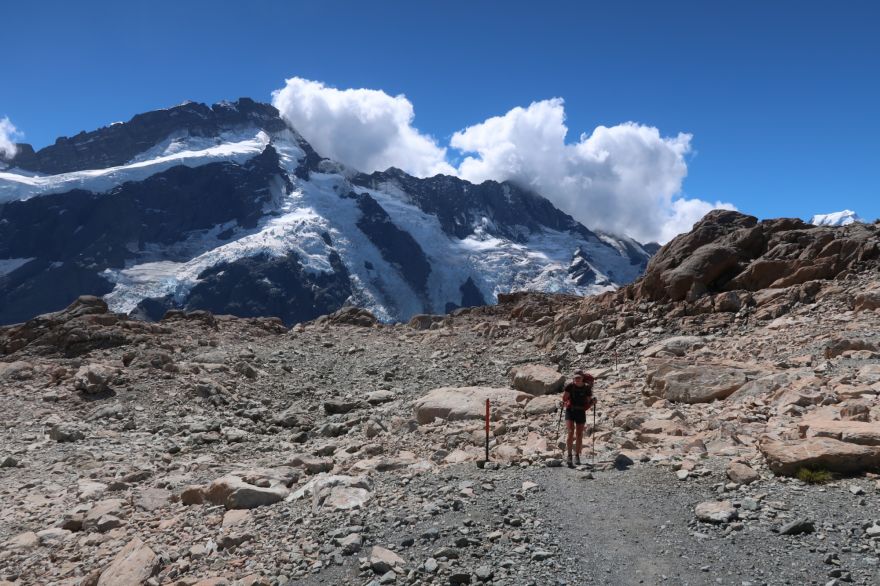 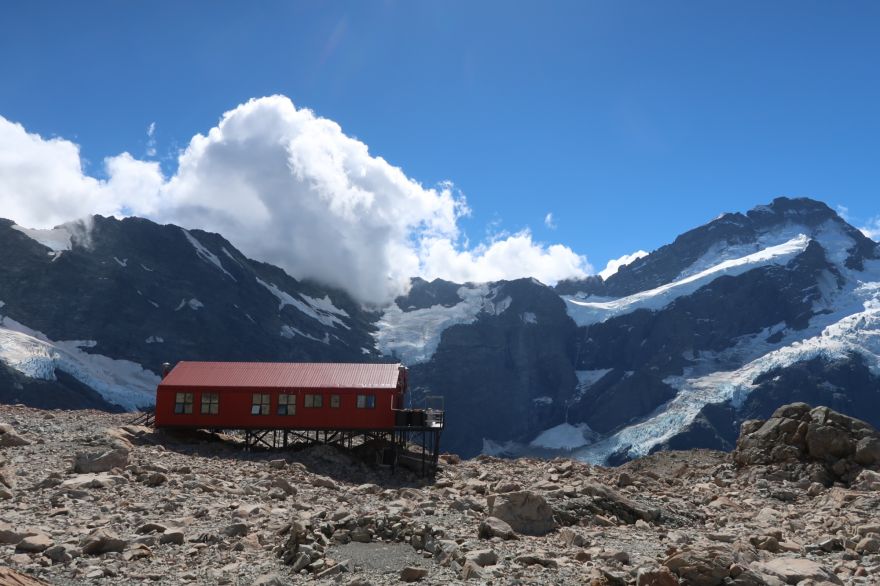 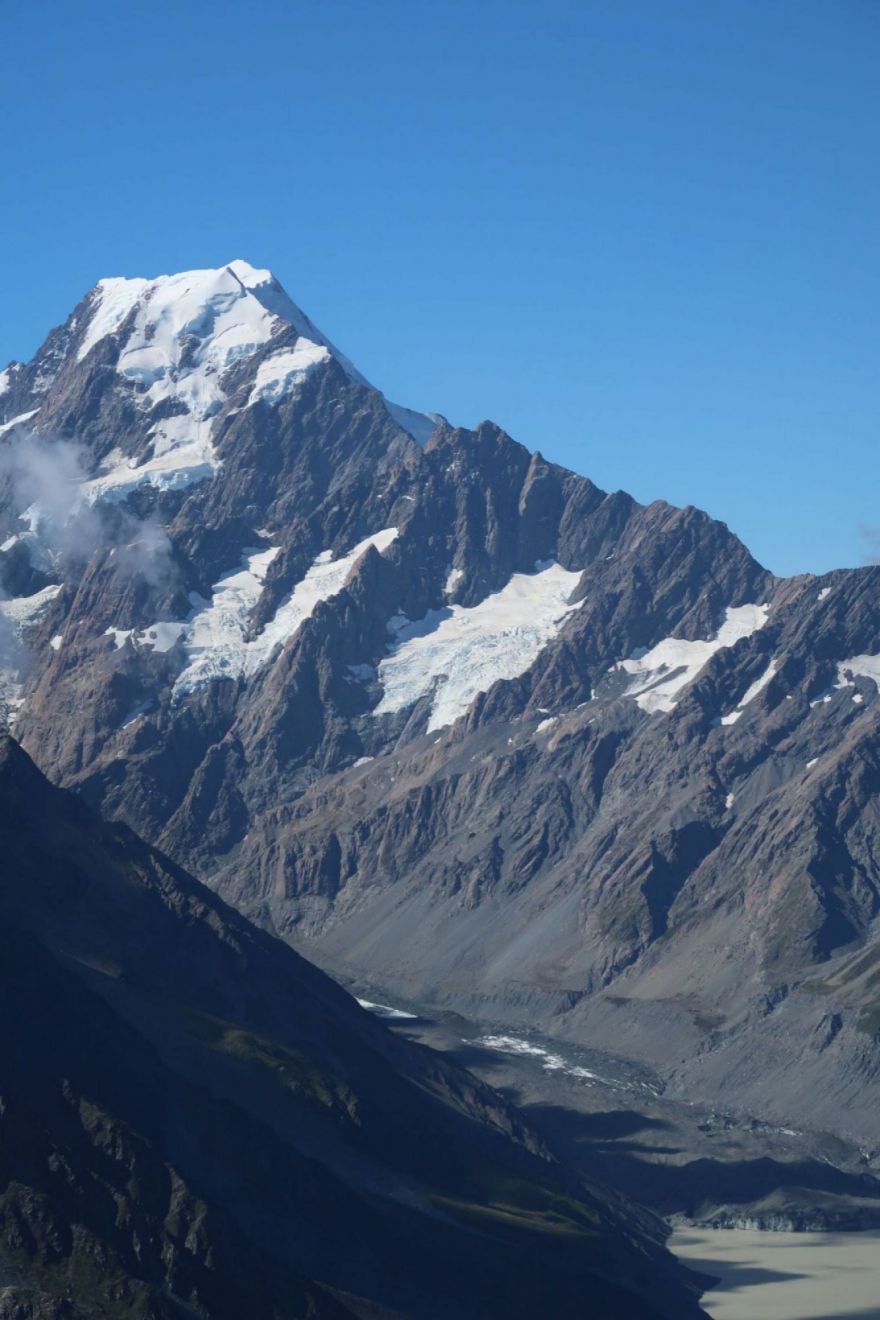 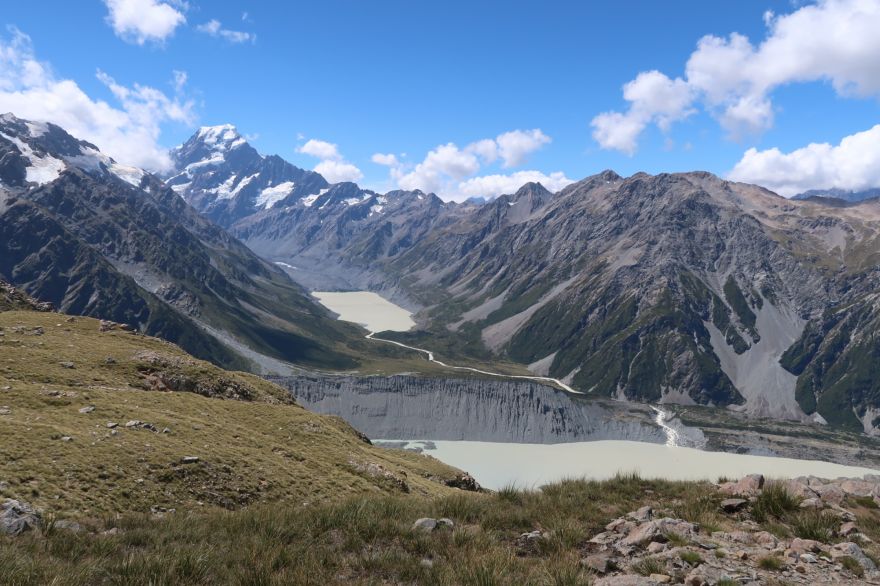 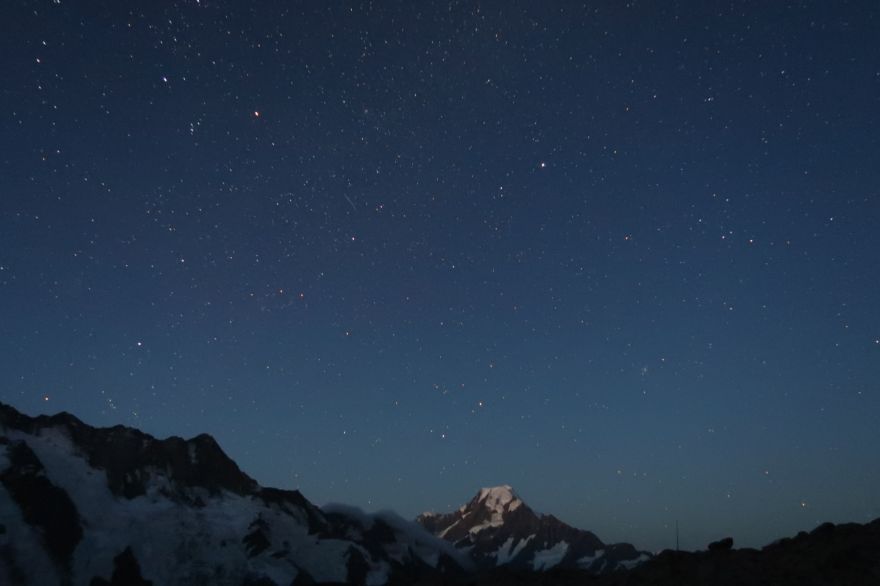 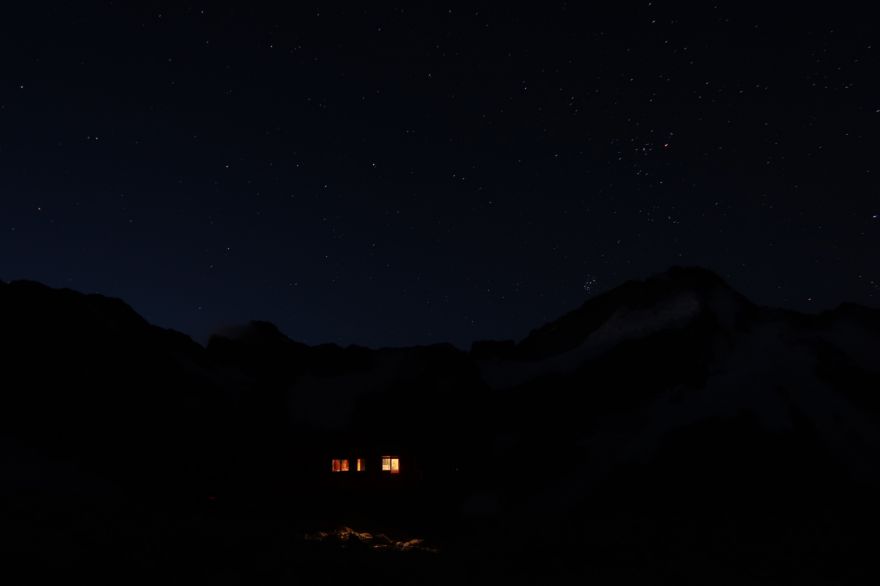 For Thursday, a gale force wind was predicted. According to the weather forecast, the wind would start to increase in strength from around midday. However, the wind arrived early. We woke up around 3am because of the wind. We fell back to sleep. When we woke up again at 6am, the wind was so bad that we decided to take the tent down as quickly as possible. We got dressed and packed and ready within minutes. We then fled to Mueller Hut to warm up again. After about 30 minutes, we set off for our descend. The first meters, we were really struggling with the wind. Every gust tried to blow us off the mountain. Especially tricky if you have to cross a large boulder field. Once we arrived at the saddle, it was really difficult to stay upright. We quickly started the real descent. We were soon protected from the wind by the mountain. We saw other people walking up the mountain wearing only a t-shirt and a short. They really don’t know what the situation is like there. 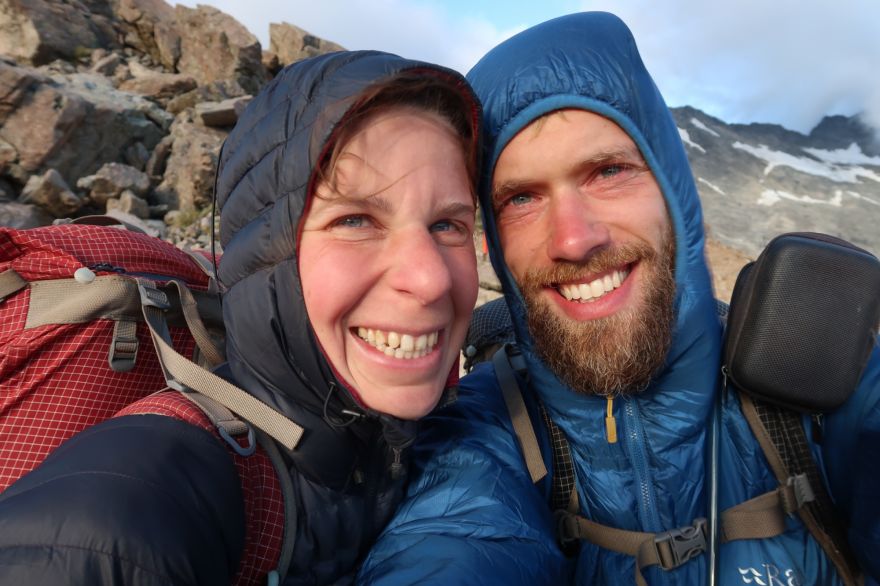 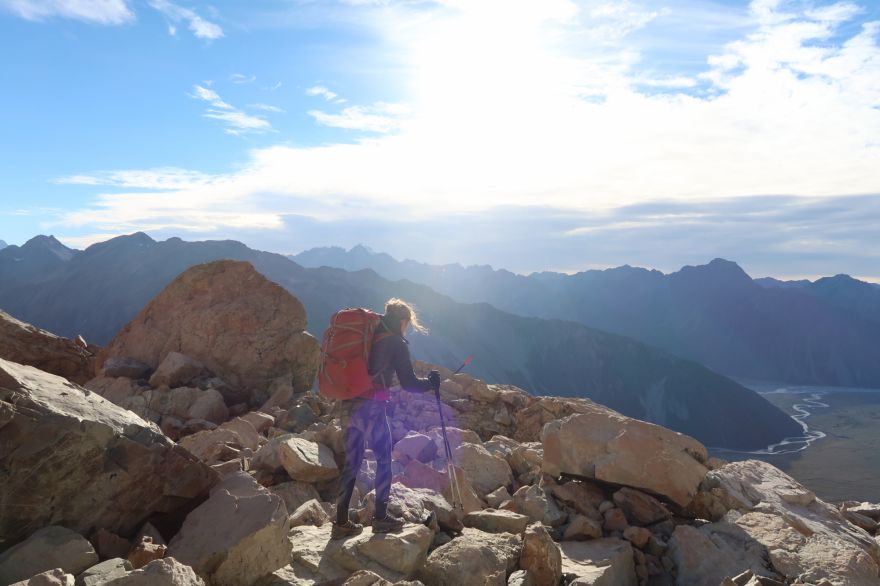 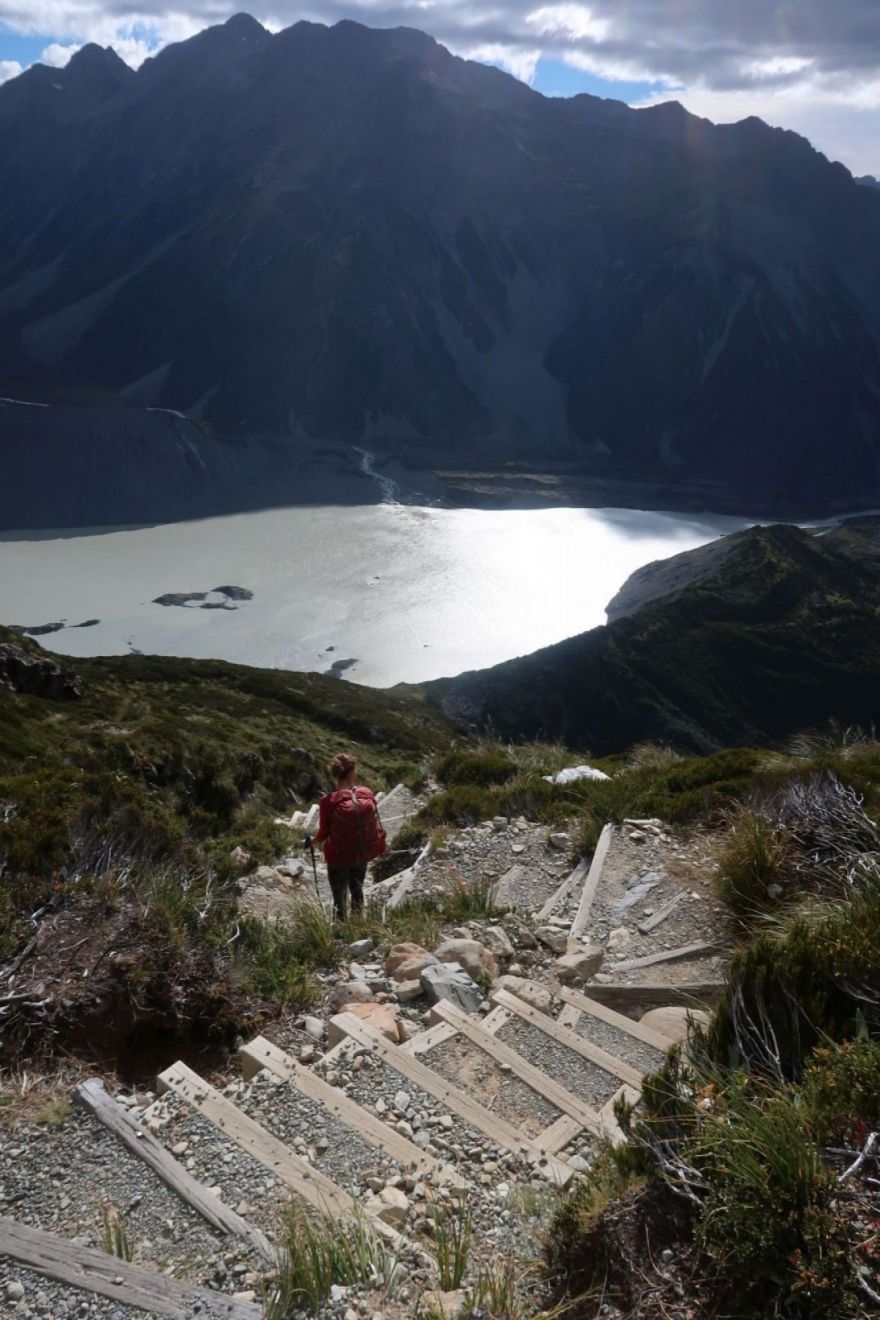 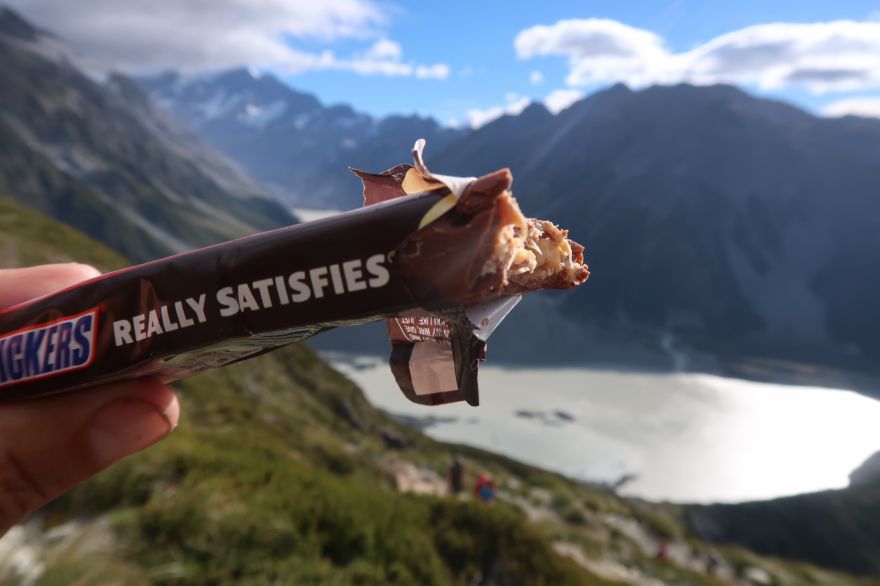 Two hours later, we arrived at the foot of the climb. We had booked a shuttle back to Tekapo for the afternoon. We therefore had some time to kill. We decided to go to Hooker Valley. We followed a track that was rather busy. At some of the boardwalks and suspension bridges, it was difficult to walk because of the wind. After 45 minutes, we arrived at Hooker Lake. Because of the clouds, we didn’t really get see Mount Cook. But luckily we did see Mount Cook yesterday.
We walked back to Mount Cook Village. Halfway on our way, it started to rain. We therefore went to the Old Mountaineers Bar & Café and waited there until our bus to Tekapo would leave. 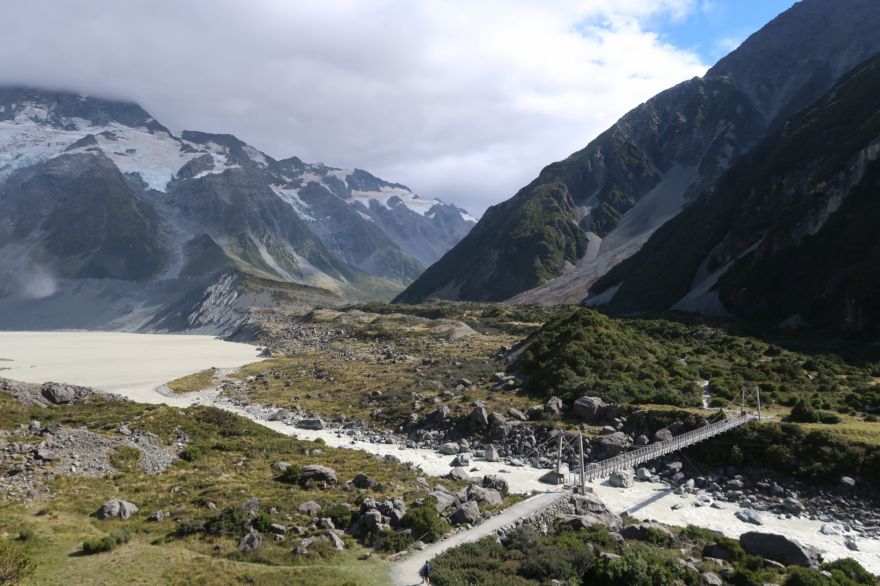 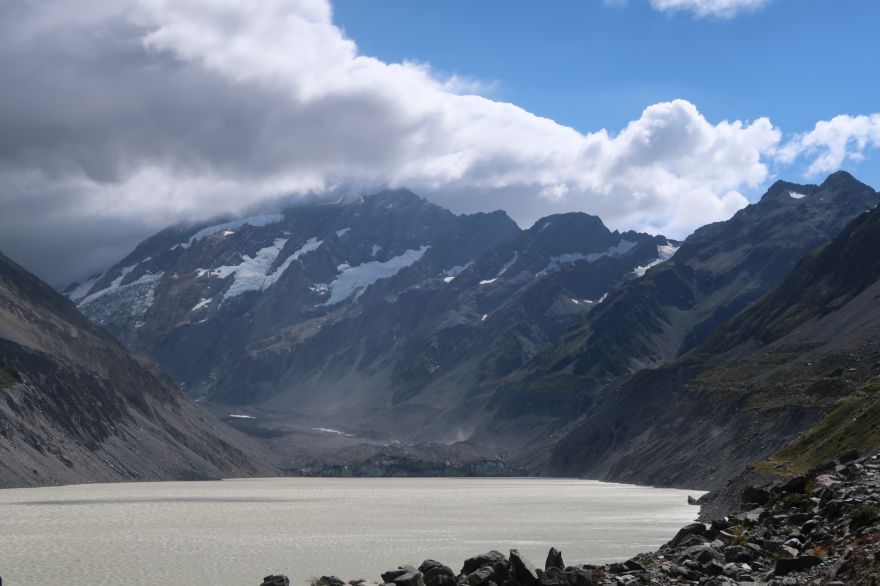