From the campsite near Lake Middleton, we only had to walk a short distance to the start of the East Ahuriri Track. A track that started on a nice gravel path through a forest. Soon, we climbed out of the forest and followed a trail through tussock in an open valley. We once lost the trail when we followed strangely placed marker poles. Once back on the correct trail, we continued to 1.437 meter. Once we arrived at the saddle, we basically saw no more marker poles for some time. However, finding our way down was not very difficult. The track was clearly visible and once we were walking along the river, we just had to follow the river downstream. The further we walked, the wider the valley became. The wind had no enemies here and was blowing fiercely.
We descended a steep slope to get to the Ahuriri River. The Ahuriri River is the largest unbridged river on the South Island. Because of all the stories we have heard, we are not really looking forward to cross the Ahuriri River. Shroomer, whom we have hiked with along the Pelorus River, was for example swept away while crossing the Ahuriri River. Luckily he is ok. However, we know that there is a bridge about 5 kilometer downstream in case the river is not crossable.
When we arrived at the river, Johann (a French hiker) had just crossed the river. He indicated the water reached his thighs. When Jasper stepped into the water, the water already reached up to his thighs. Because of the sun glare, we couldn’t see the next meters we had to cross and were therefore not able to tell whether it would become deeper or not. Johann pointed and shouted to us, but because of the raging river, we couldn’t hear a word of what he was saying. Eventually, Johann walked into the river to say that the first step into the river was straight into the deepest part of the river. It would only get better. With this in mind, we gave it another attempt. Again, when we stepped into the water, the water came up to our thighs. We slowly stepped forward. Water tried to push us over and almost succeeded as there was no foothold at all on the slippery stones. Gently, we managed to inch forward and noticed that the river was not getting any deeper. When we got out of the fast flowing current, we soon we able to step out of the river. We set up camp near a cliff on the other side of the river. 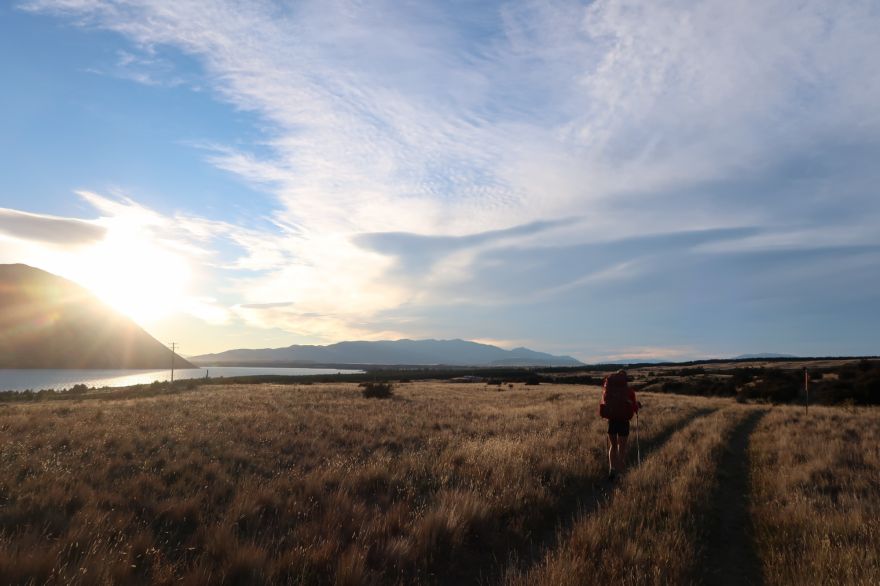 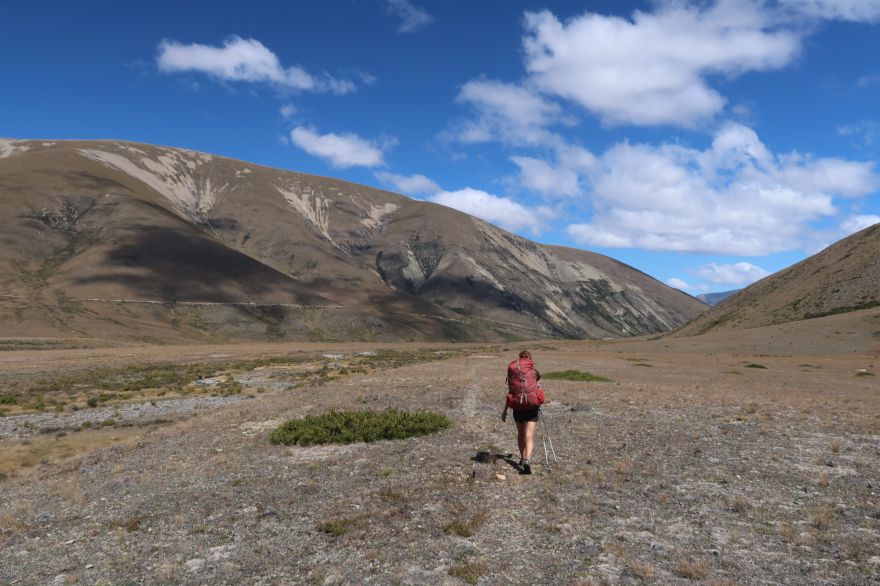 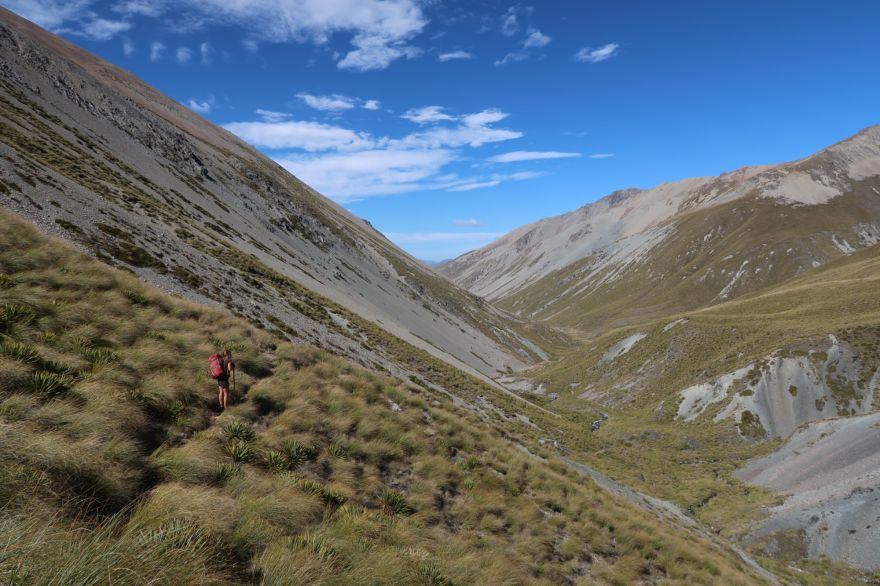 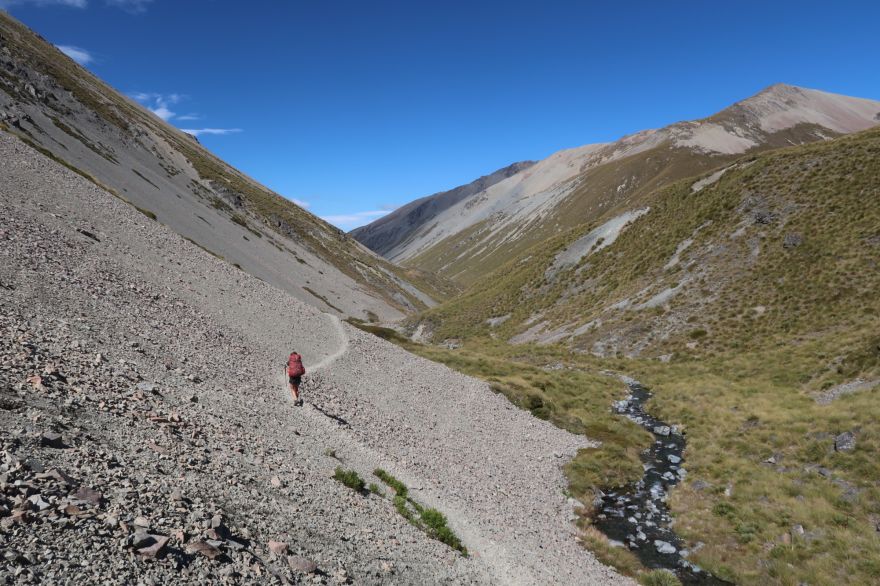 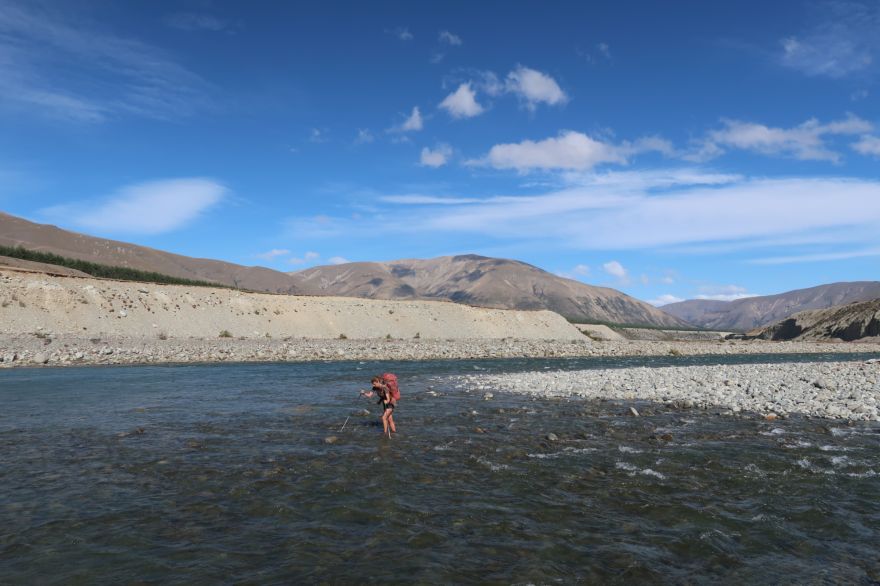 We woke up by rain falling on our tent. Luckily, when we started packing, it stopped raining. From our campsite near the Ahuriri River, the Te Araroa trail ascended a cliff. We gave it a try, but soon realized that the lose stone was to dangerous for us. Instead, we walked about 100 meter to the right, where we found a 4x4 track in a dry river bed that was way better to climb. With a short detour, we arrived back on the Te Araroa trail and followed the marker poles to the start of the Breast Hill Track. We followed an easy tramping track over farmland and onto an old 4wd road. We passed Tin Hut (a private hut) and from there, the 4wd road started to climb. We reached Martha Saddle (1.680 meter). We decided to stop for a short lunch break just below the saddle, where we had a little bit of shelter from the cold wind. However, while we were enjoying our lunch, it started to rain. We therefore quickly continued walking and descended Martha Saddle via an old 4wd road. We walked fast and soon we arrived at the Timaru River. We crossed the Timaru River a few times before arriving at the Top Timaru Hut. 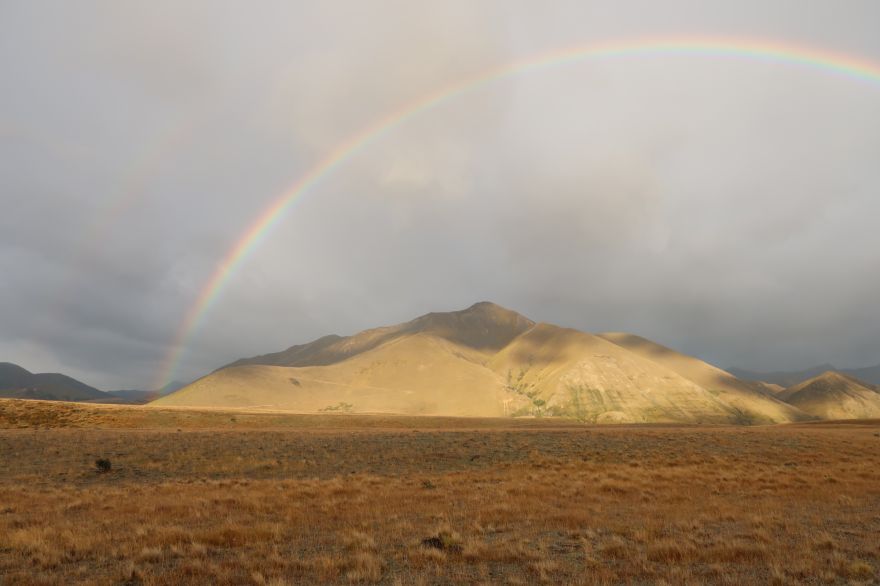 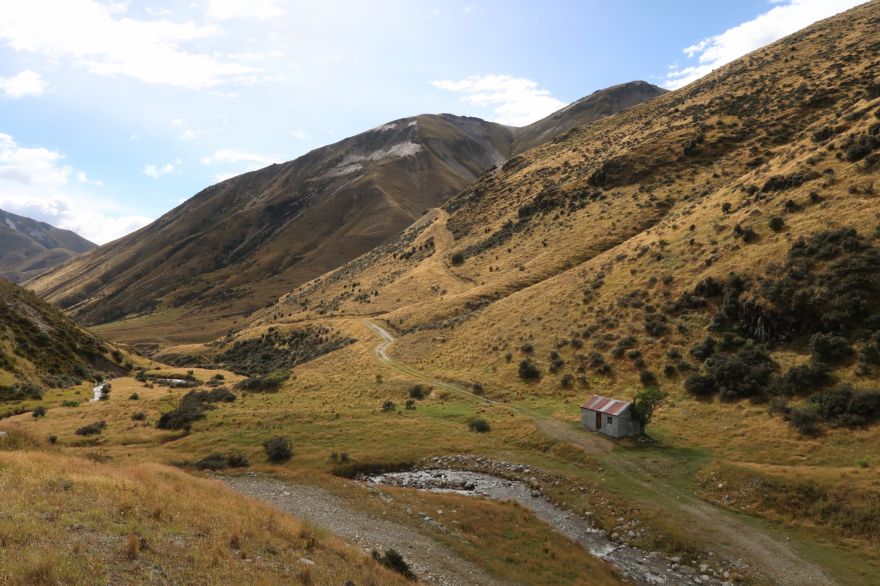 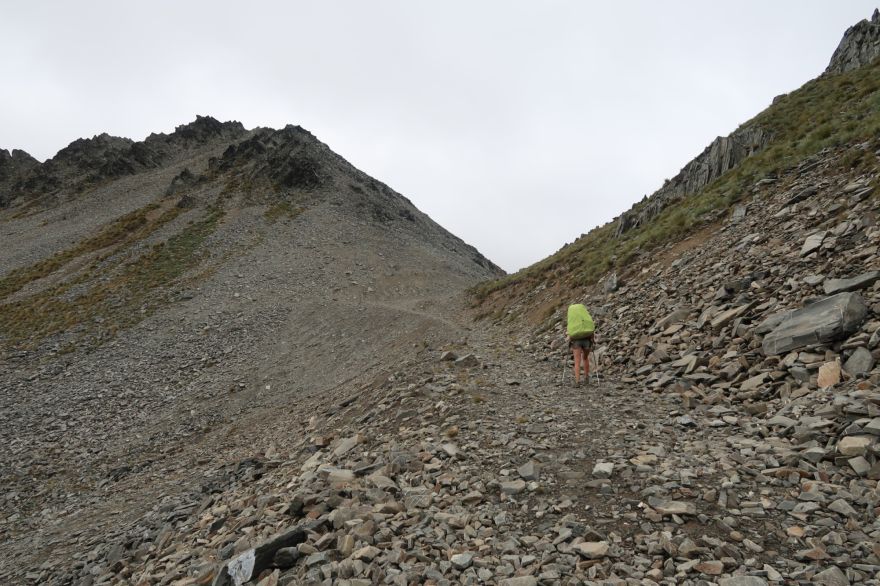 When we were in Arthur’s Pass a few weeks ago, Cyclone Fehi passed the South Island. This time, Cyclone Gita was forecasted to hit the South Island. A lot of rainfall was predicted for the South Island. We therefore wanted to have a proper shelter, in case we got stuck for a few days. The Top Timaru Hut was such a shelter. However, when we woke up on Tuesday morning, it was raining but the river was still fine. Knowing we had to cross the river multiple times, we were eager to continue and make as much progress as possible. Not knowing where we would end up, we decided to stay in the Top Timaru Hut.
Later that day, three hikers arrived at the Top Timaru Hut and we knew we had made the right decision to stay. They were cold and all there gear was wet. When they showed us a picture of Martha Saddle, all we could see was a landscape covered in snow. Nothing that came close to what we saw yesterday. When we woke up Wednesday morning, the Top Timaru Hut was also covered in a thin layer of snow. Although it stopped raining in the morning, the Timaru River had risen quite a bit. We knew that continuing would not make sense today. Especially because we could hear rock rolling in the river. 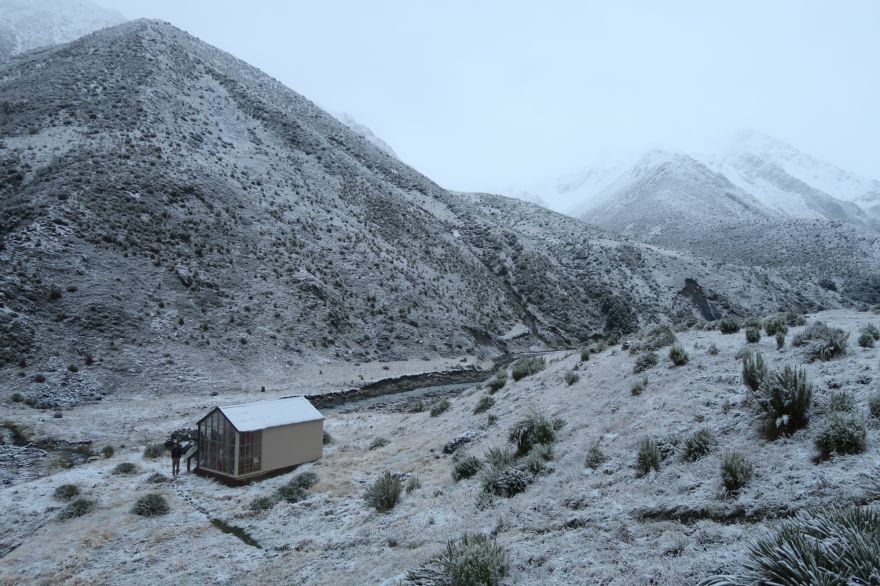 The Timaru River was still high on Thursday. However, we didn’t hear any rolling rocks anymore and had the feeling it was doable to cross the river. We left the Top Timaru Hut under a clear blue sky. The trail followed the Timaru River for a while. Where the rivers streams through a narrow gorge, the trail climbs over a hill. These climbs were steep in some places. After a few hours of going up and down, we had to cross the Timaru River a few times. We couldn’t see the bottom of the river and were therefore very careful by every crossing. Once, we had to take three attempts to find the right place to cross the river. Six hours later, we finally left the river behind.

From where we turned left, the Te Araroa trail climbed another mountain. And with climbing, we mean climbing. In 2,5 kilometer the track climbed from 600 to 1.100 meter. After one-and-a-half hour, we arrived at Stodys Hut. We had been warned by various people about this hut (lots of mice), and therefore didn’t want to stay here. After a short break, we continued and followed a fine 4wd road to the top of Breast Hill. The further we climbed, the more snow we saw. In the end, we were walking in about 10 centimeters of snow. The view from Breast Hill (1.578 meter) was breathtaking. We could stay here for hours. However, it was getting late, and we still had to descend a snow covered path.

Where the climb to Breast Hill, was very easy, the descend was awful! We couldn’t see the track, because it was completely covered in a thick layer of snow. With every step we made, we risked stepping onto a tussock, on the track or in a hole. We both fell a few times, luckily without resulting in injuries. We arrived just after 8pm at the Pakituhi Hut. Unfortunately, the hut was already full. We therefore set up our tent. Because we are still at 1.300 meter, the temperature dropped quickly in this snow covered landscape, making us flee to our sleeping bags. 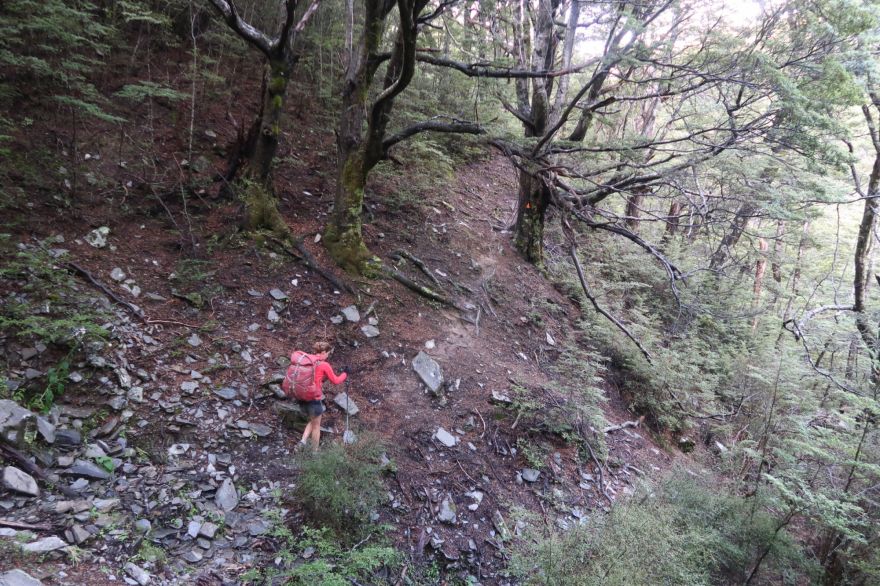 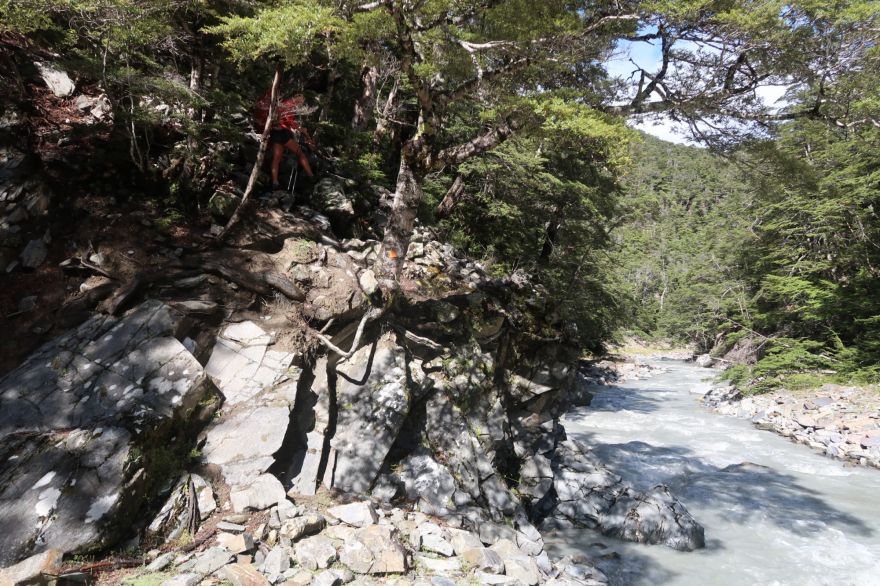 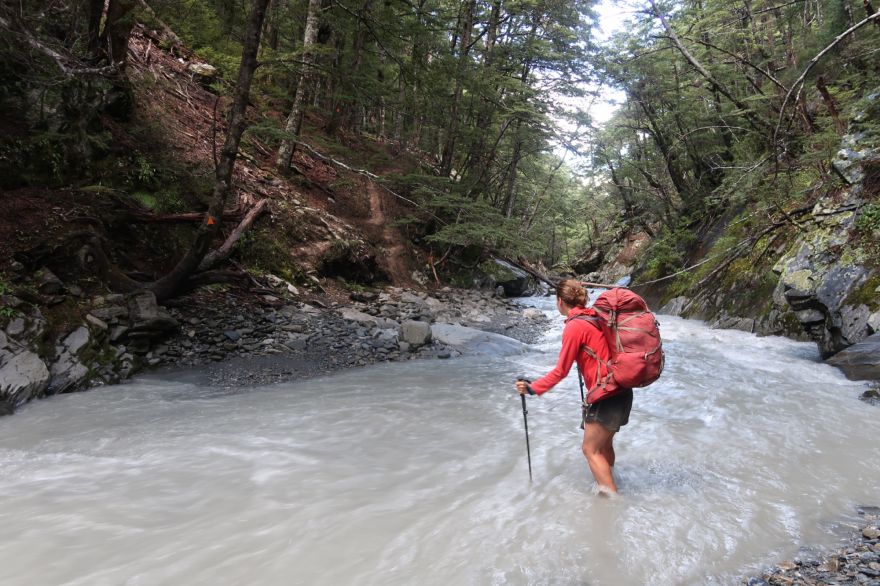 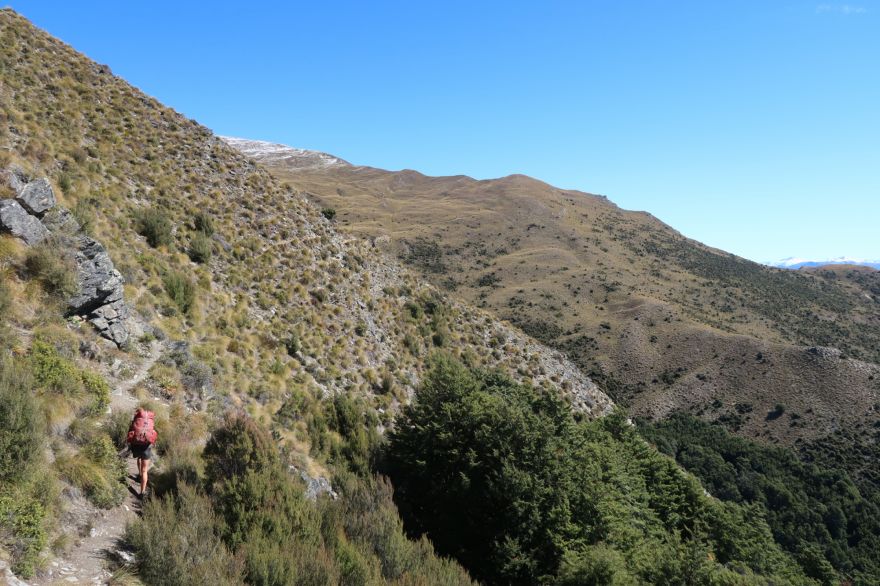 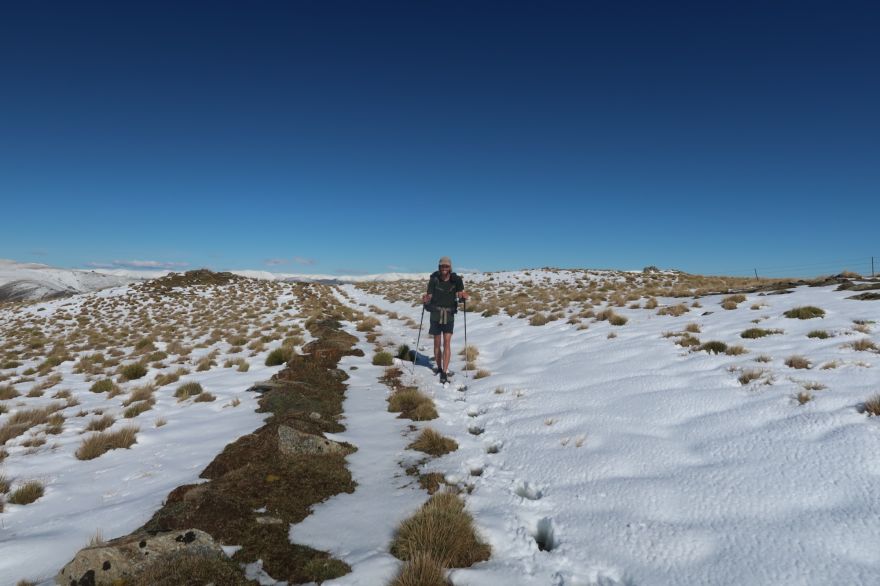 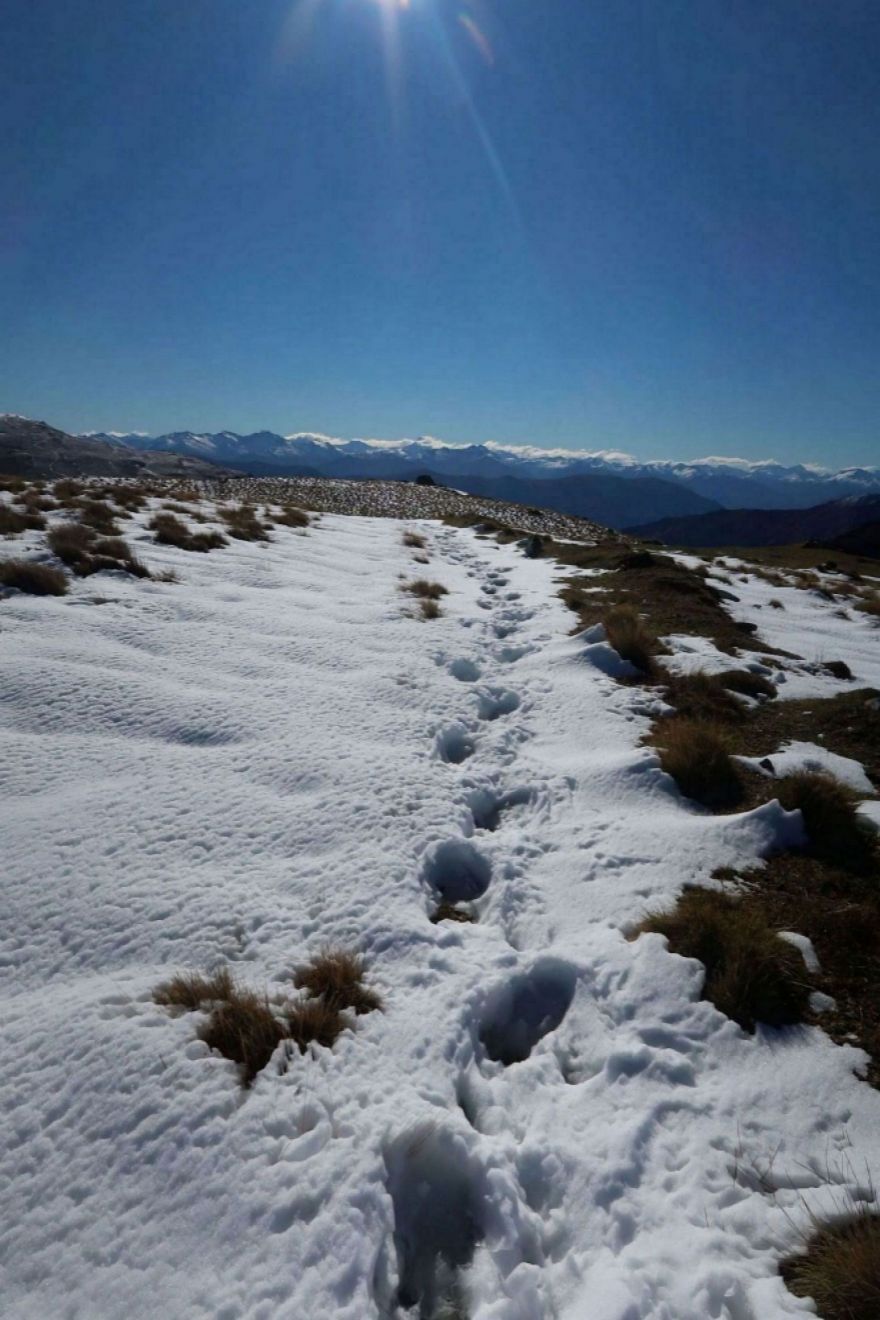 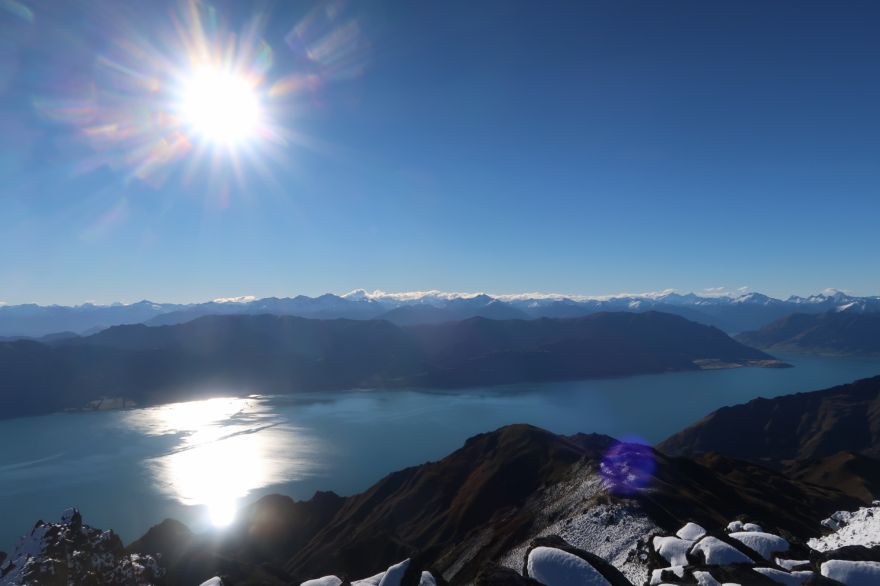 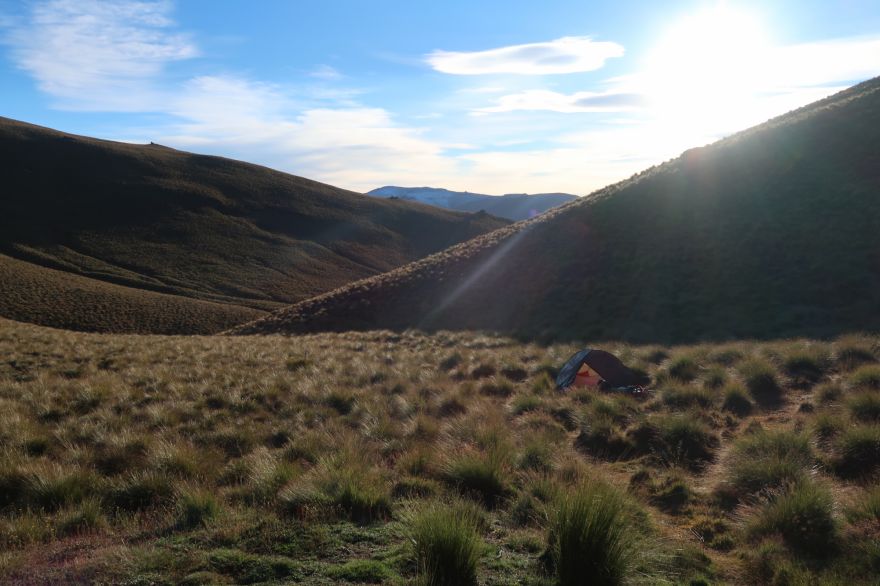 With our sleeping bags closed, we had quite a comfortable night. However, we waited with packing, until the sun provided a little bit of warmth. When everything was packed, we continued our descend from Breast Hill. We descended from 1.330 meter to Lake Hawea at 366 meter. Almost 1.000 vertical meters in a little less then 4 kilometer. Not just down, but along a ridge that went up and down. The track was steep, but not very difficult. Every 10 minutes or so, we stopped to enjoy the views.

When we reached Lake Hawea, we followed a nice track around the lake shore into Hawea. We ordered a burger at the local supermarket/take-away/restaurant. When we were done, we continued another 12 kilometer to Albert Town. We followed a gravel road (cycling path) along the Hawea River. Just before we reached Albert Town, we crossed a suspension bridge and arrived at a campsite where we stayed for the night. 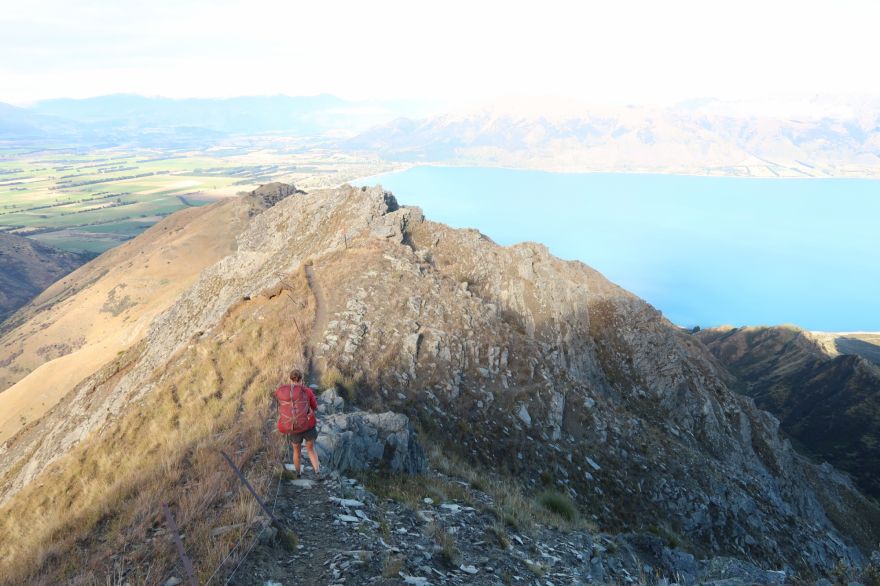 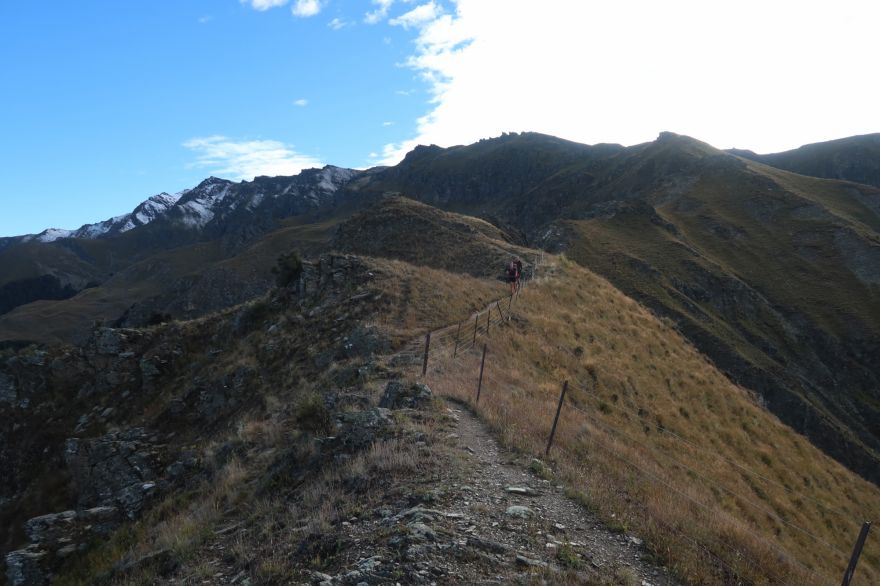 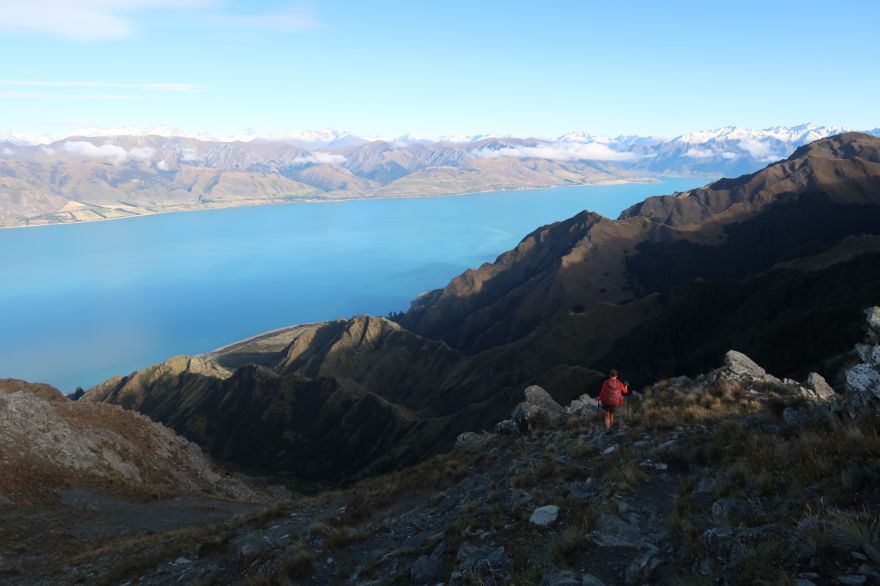 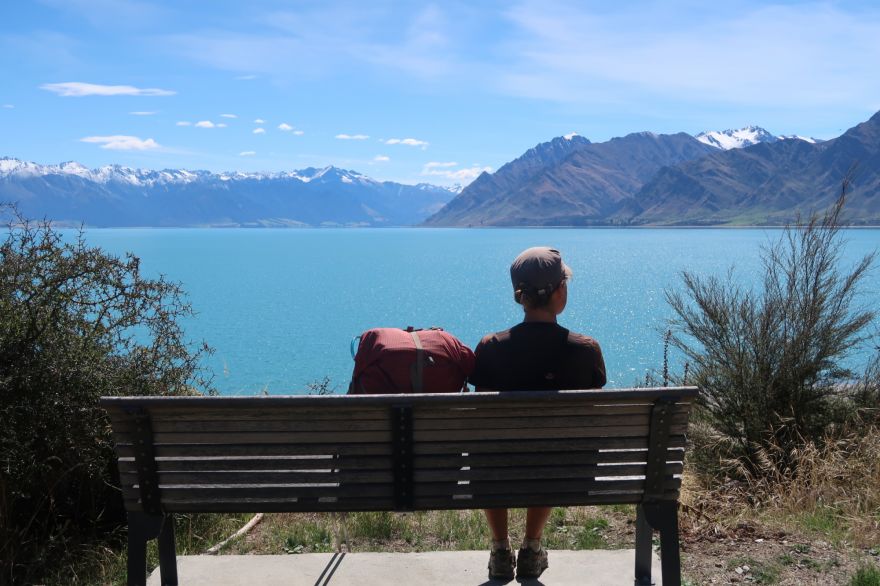 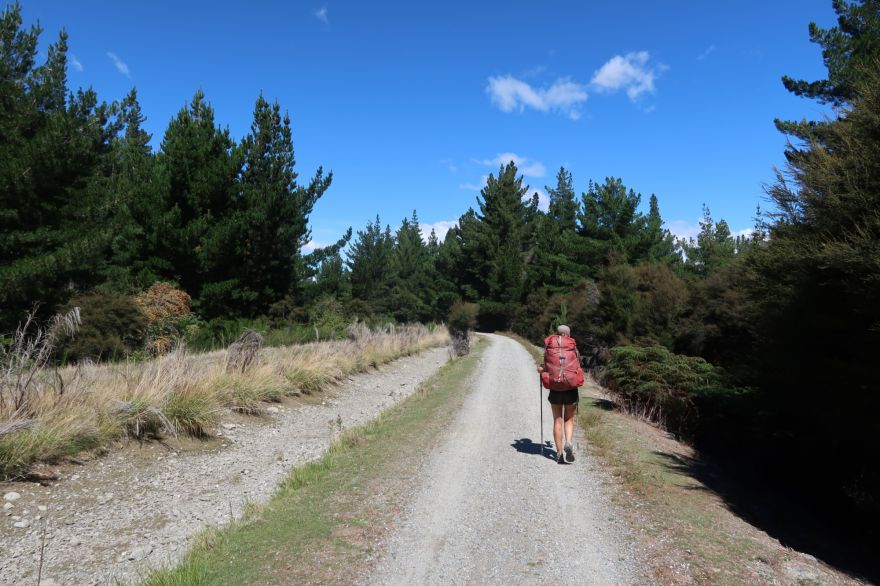 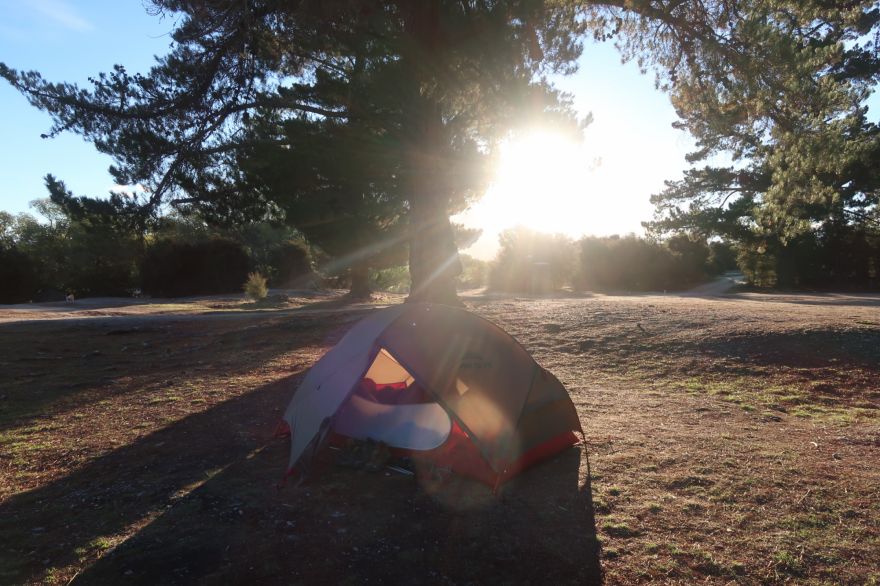 From our campsite, it was another kilometer to Albert Town. From Albert Town, we followed the Te Araroa trail along the Clutha River. After a few kilometers, we arrived at Lake Wanaka. One of the largest lakes in the area. We followed Lake Wanaka via a shared cycling and walking track. Before we realized, we arrived in Wanaka. We heard from other hikers, that the food in Wanaka is amazing. We therefore went to Charlie Brown and ordered two Crêpes. Subsequently, we went to the Holiday Park, where we set up our camp for the night. Well, for two nights. We have to do some shopping in Wanaka before we can continue…