Te Araroa: Cycling along canals (from Tekapo to Lake Ohau)

From Tekapo, the Te Araroa Trail continues south along the Tekapo Canal. Because there are restrictions in where to camp, you have to walk at least 40 kilometer from campsite to campsite. Thereby, this 40 kilometer is on a straight road along a canal. Not the most ideal walking terrain. Therefore we decided we wanted to cycle this part of the Te Araroa Trail instead. We have been in contact with Wayne of Alps 2 Ocean Tours via SMS. The morning we got back from our visit to Mount Cook National Park, we called Wayne. Suddenly it went very fast: Wayne gave us lots of information about the trail and sent us the lock combination of the two bikes parked at the Tekapo Holiday Park. The only problem was that he only had one bike trailer. But we could leave our luggage at the Holiday Park and he would bring that later in the day to Twizel. What a service.

We set off around 10:45am. Soon after leaving Tekapo, we drove into a wide landscape. After a few kilometer, we arrived at the Tekapo Canal. The Tekapo Canal is part of a major water works built in the ‘70s to feed seven hydro plants. We followed the straight road for kilometers. The landscape itself was amazing. However, after an hour, even this landscape started to get boring, as we were still cycling on a straight road along a straight canal. A welcome change of scenery was the salmon farm near the end of the Tekapo Canal. 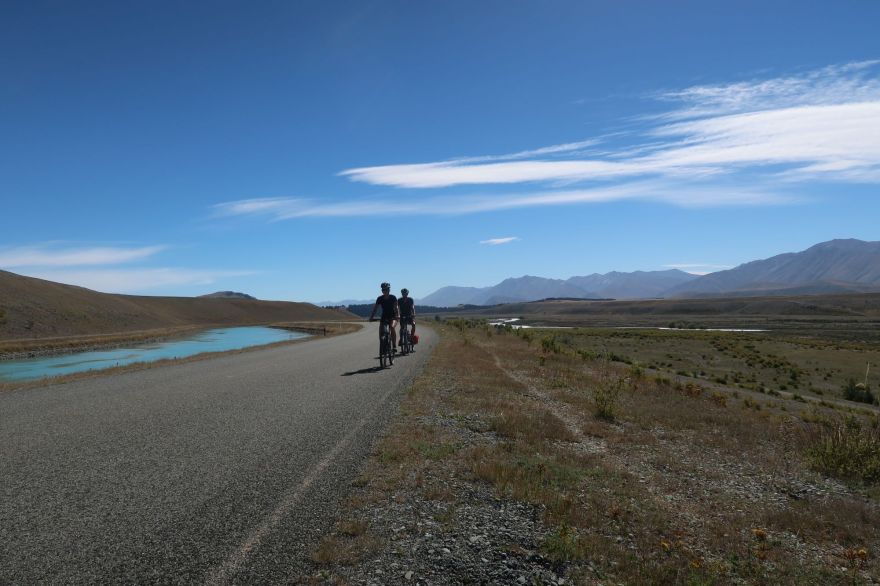 Just after we passed the salmon farm, we left the Tekapo Canal and descended to Lake Pukaki. We stopped for a lunch break at a picnic area. After lunch, we continued on a cycly path on the lake shore. Once, Jasper wasn’t really paying attention and missed a corner. Luckily not in the side of the lake. We left the lake behind and continued over the Pukaki Flat Tracks. We cyclede through a wide plain towards Twizel. In the evening, Wayne came by to drop one of our bags as well as a second trailer for our bikes. 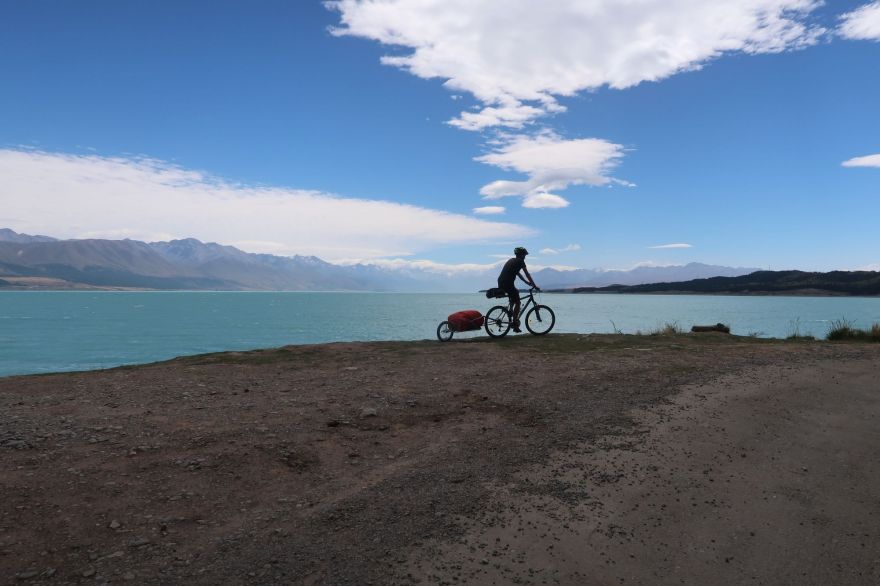 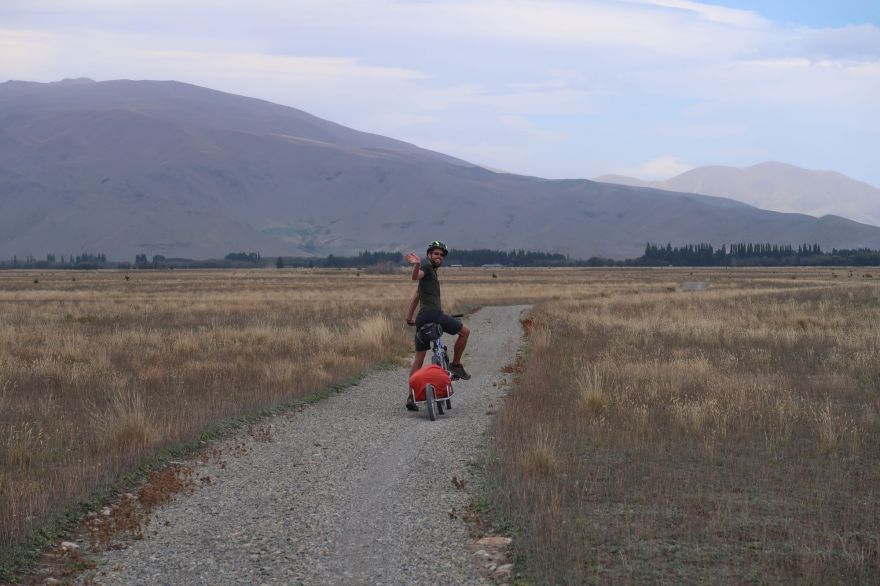 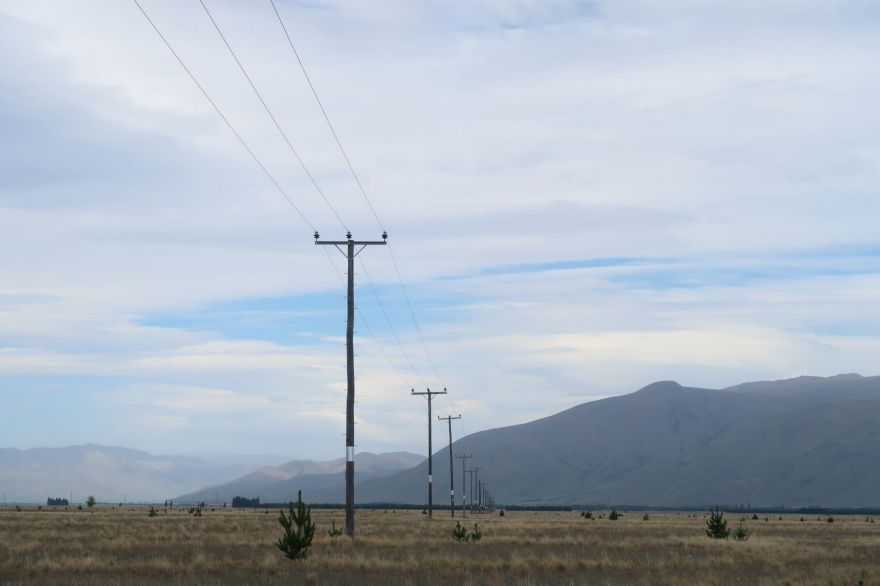 Day two on the bike

During the night, it started to get really windy. Luckily, we had set-up our tent close to some trees that proved to be a good shelter from the wind. When we had packed everything, it was a bit rainy. We therefore decided to go for a coffee at a café in Twizel. We finally left Twizel around 11am. From Twizel, we had the option to follow the Te Araroa Trail south of the canal or the official Alps 2 Ocean Cycle path along the canal. Because we wanted to see what we had missed by not walking this section, we decided to follow the Te Araroa Trail (which is coincidentally also the high water alternative of the Alps 2 Ocean Cycleway).
We left Twizel via a narrow track. To get across the Boom Ruataniwha Dam, we had to cycle on the highway. After we crossed the Boom Ruataniwha Dam, we turned right and entered a gravel road. Perhaps gravel road is formulated too positive. Maybe it is a fine road to walk, but not to cycle. The road was covered with reasonably large stones, which made it a very bumpy and slow-going ride. We had to climb a few hills that were too steep to cycle. And pushing a bike + trailer is not so much fun. When we reached Lake Ohau, we joined the official Alps 2 Ocean route, and the track improved significantly. The final 10 kilometer flew by. Before we realized, we arrived at Lake Middleton Campsite. We tied our bikes to a tree and sent Wayne a message that we had arrived at the campsite. We then prepared all our hiking gear for another day of walking tomorrow. 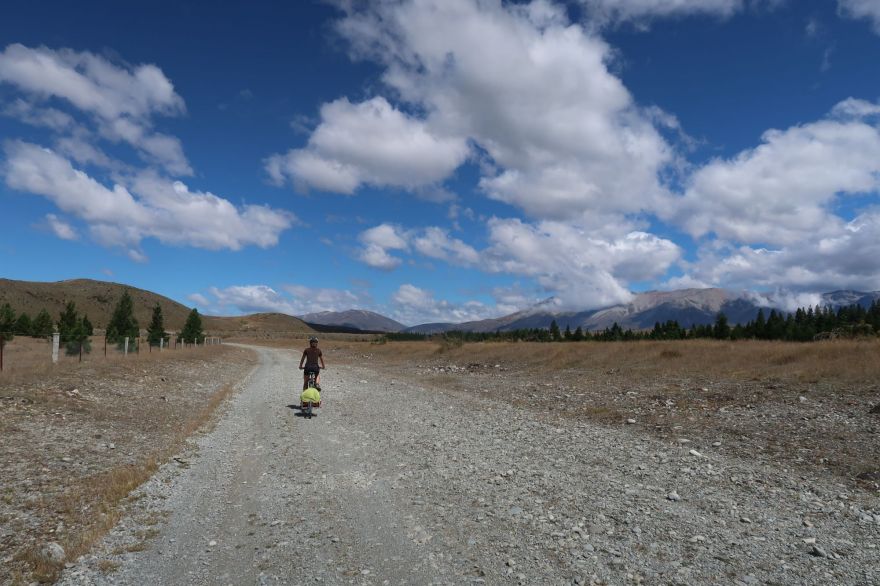 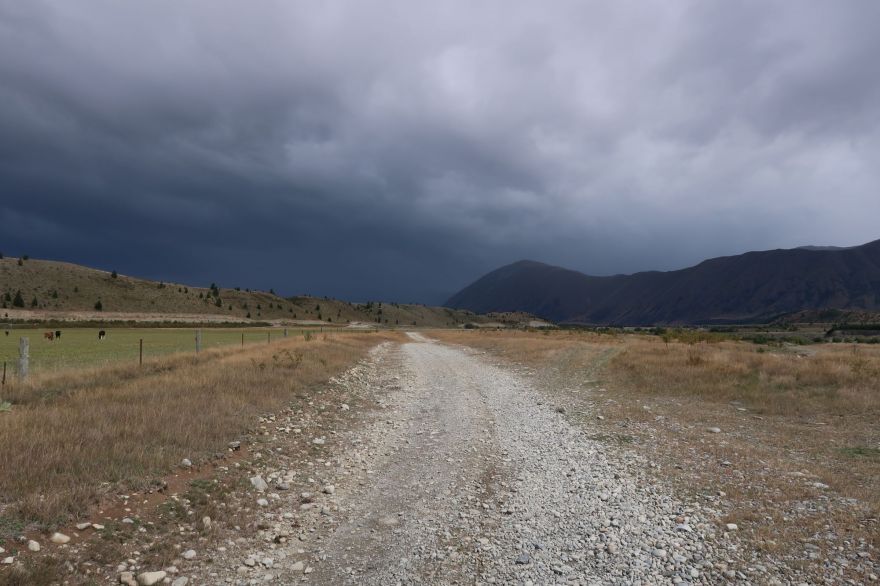 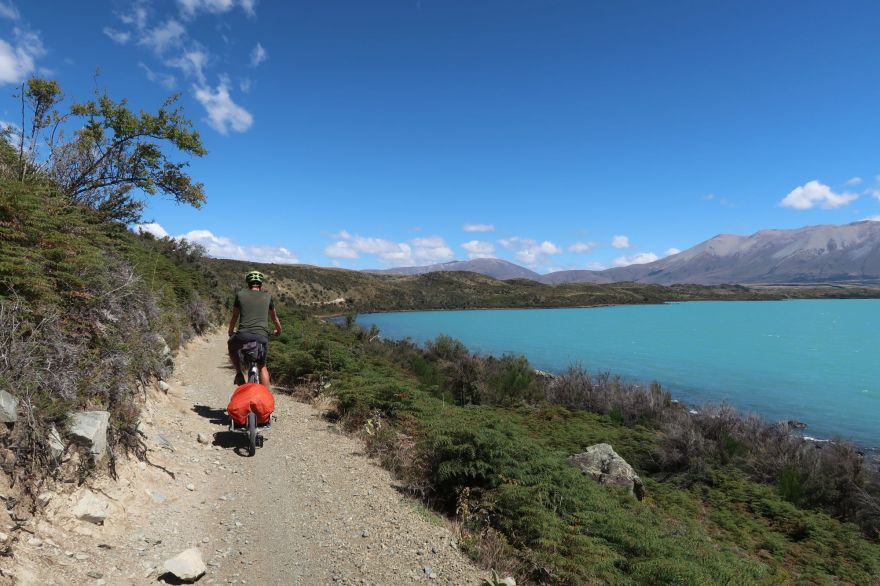