Thursday morning, we left the Boyle River Outdoor Education Center around 7:30am. We wanted to het as far as possible. However, the first few kilometers of the day were rather slow-going. We had to walk through the riverbed of Boyle River. When we arrived at Windy Point, we could make some speed again. By then, the heat had also arrived. With temperatures way above 30 degrees Celsius, our walk had changed into a battle against the sun. We were glad we finally entered a forest with some shade. From the forest, we had a good view over the grass plains on the left. Around lunch time, we arrived at the Hope Halfway Hut. An old hut, where we sat down for lunch.
Despite the extreme temperature today, we continued another 7 kilometer. The Te Araroa Trail brought us through forest and wide valley floor. Suddenly, we stumbled upon to cows that were standing in the middle of the track. We haven’t seen any stock today, so we were not sure where these cows belong to. About 15 minutes later, we arrived at the Kiwi Lodge. A beautiful hut that is correctly named lodge. 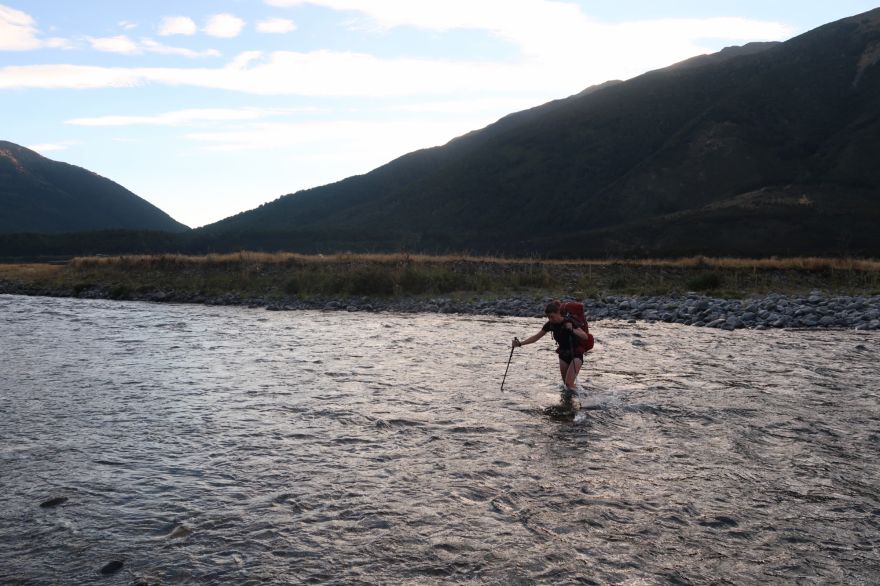 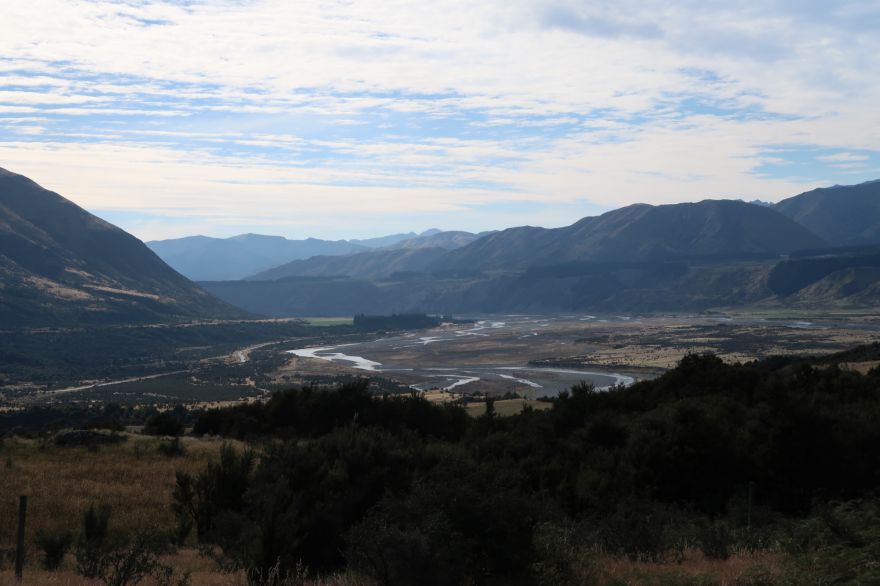 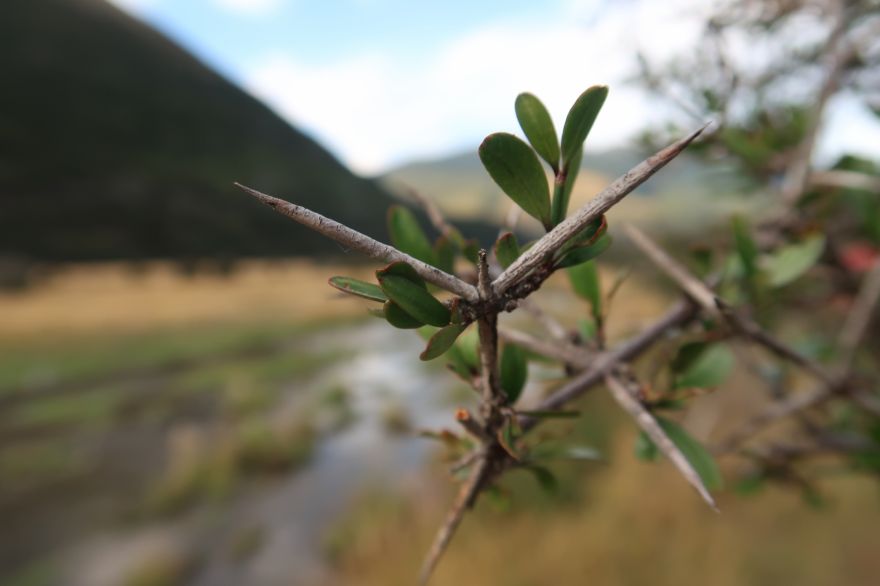 On Friday, we wanted to leave as early as possible because of the heat. We therefore left the hut at 6:15am. From Hope Kiwi Lodge (646 meter), we continued through grass plains and forest to Kiwi Saddle (677 meter). Because it was pretty cloudy, we didn’t go to viewpoint of Lake Sumner and were later told by other Te Araroa hikers that this was a wise choice. From Kiwi Saddle, we could see Lake Sumner through the trees. It took quite some time before we finally arrived at the lake shore. After a short break, we followed the trail through a forest. Just before we arrived at the next hut, we crossed the Matagouri Flat. Half an hour later, we arrived at Hurunui Hut (no.5 Hut).

After we ate our lunch, we continued down south. According to the trail notes, the section to the next hut would take about 4 hours. Soon after leaving the hut, we noticed a sign saying it was 1,5 hours to the next hut. It was rather disappointing that the 4 hours of the trail notes seemed to be more correct.
The track was in quite a bad condition: lots of fallen trees, washout, etc. Because we had to concentrate on the track, we almost missed the hot spring. Luckily Jasper noticed the orange marker with ‘hot spring ’ on it. Marjon couldn’t resist and went in. In the meantime, Jasper was being eaten alive by the sandflies. Horrendous. Jasper begged Marjon to continue, which she eventually did. We followed the rollercoaster track through the forest until Hurunui Hut no.3 (648 meter). 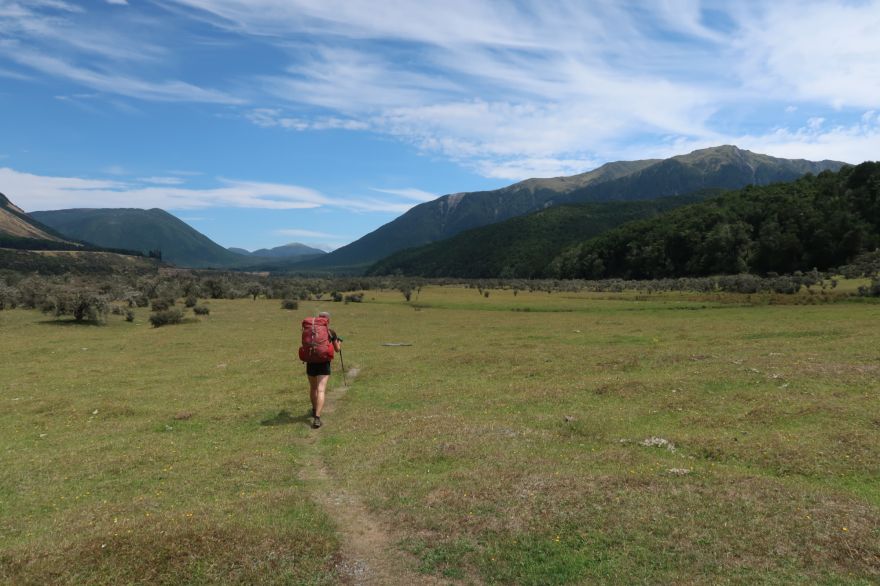 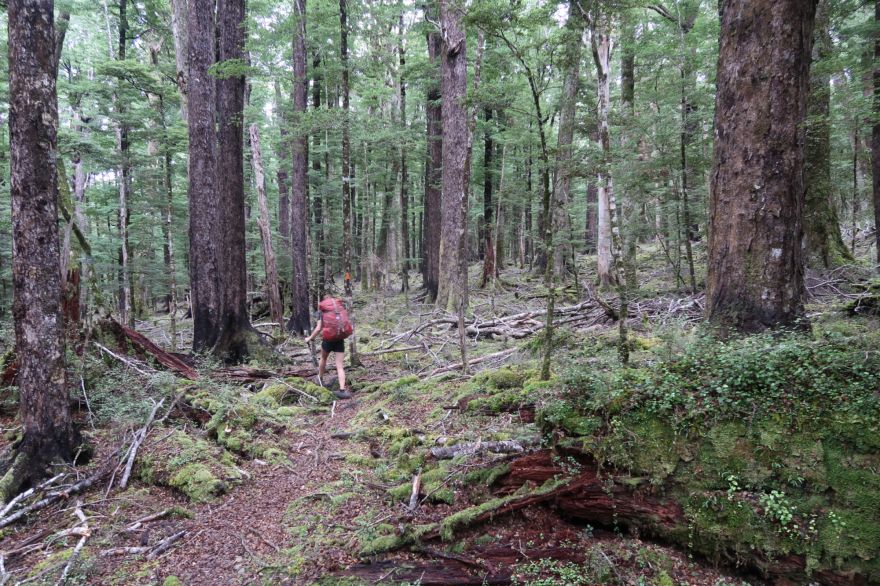 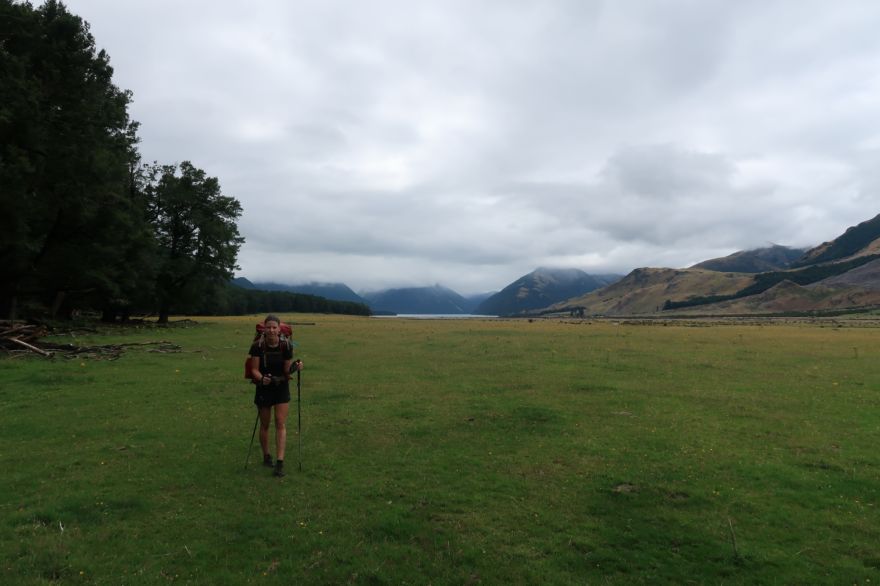 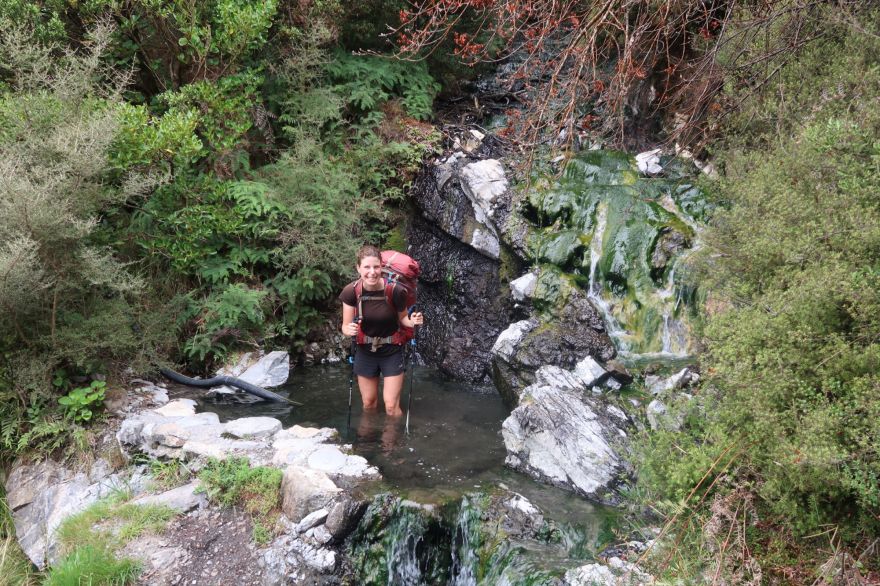 From Hurunui Hut no.3, we followed the Hurunui River upstream. We crossed two washouts that were very sketchy. One of these washouts was a near vertical sand wall, where we had to hold on to tree roots to prevent us from falling down into the river. Having survived this part, we continued our climb to Harper Pass (962 meter). The ferns made it difficult to see where to place our feet. Once we arrived at the pass, we had a great view of where we were going: the Taramakau Valley. The descend followed a steep track covered with lose stones. We had to take care not to slip here. We managed to get safely to the Taramakau River. We crossed the river via a suspension bridge and followed the river downstream. Several major washouts had taken away large sections of the track. We therefore had to walk through the riverbed. After about 6 hours, we arrived at Locke Stream Hut (no.4 hut). 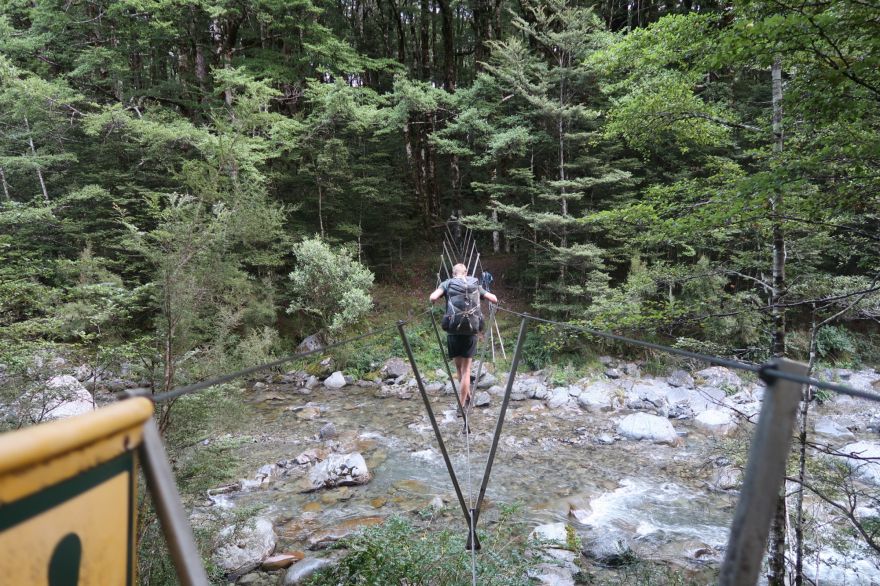 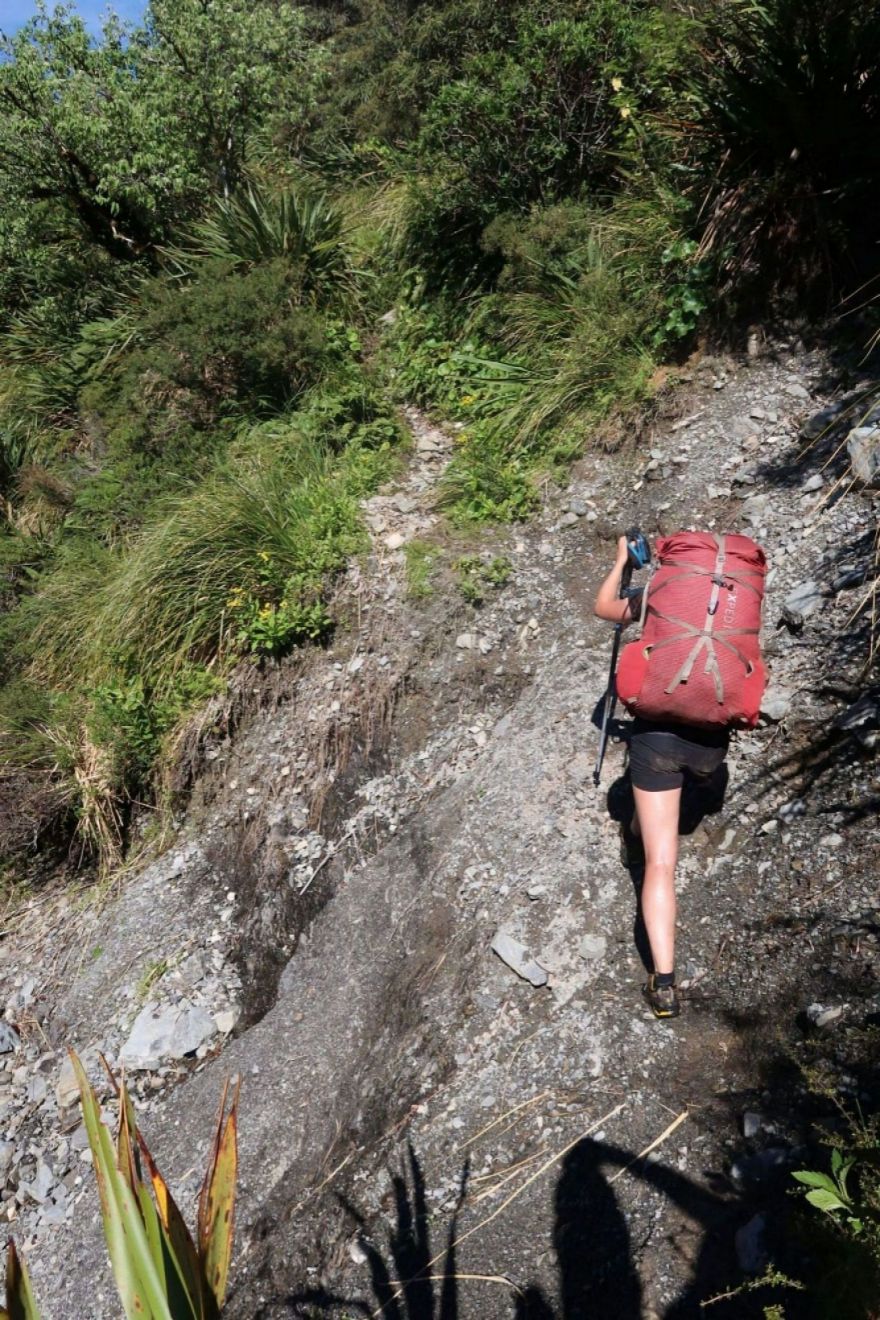 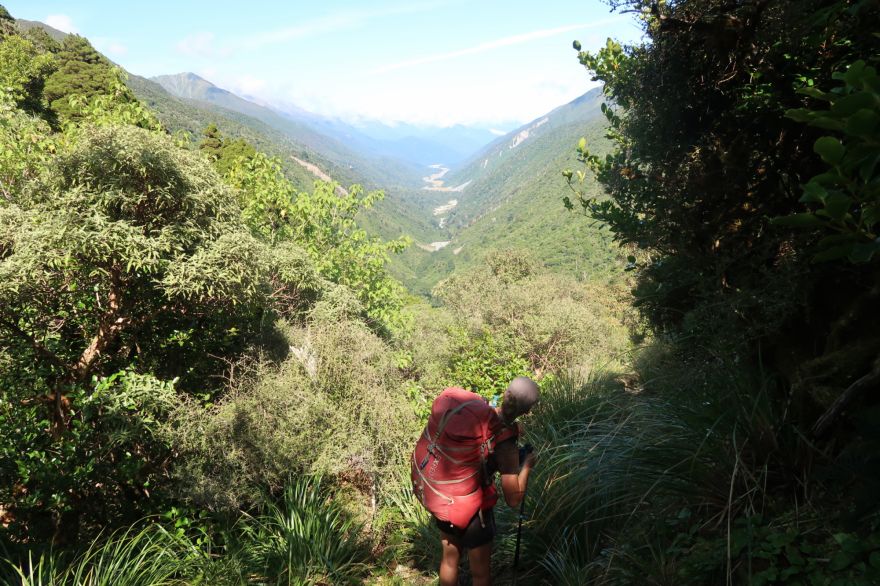 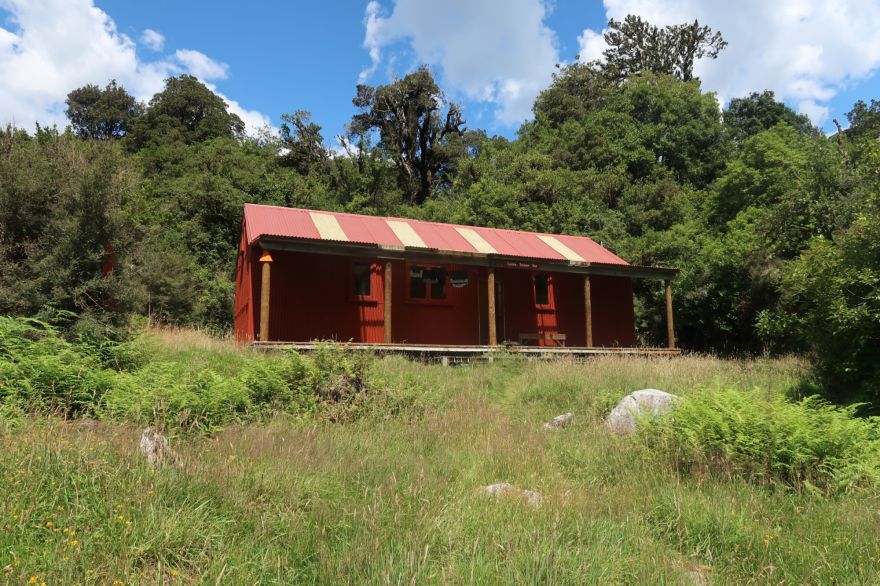 Sunday, we only had to follow the Taramakau River until we reached the junction with the Otira River. This was easier said then done. The first two hours of the day were fine. We followed a reasonably well marked trail through the forest. After passing Kiwi Hut, we didn’t see any markers and had to find our own way along the Taramakau River. The riverbed was extremely wide and at sections covered with dense bush, making it difficult to navigate. We walked for hours through the stone covered riverbed. When we finally arrived at the junction with the Otira River, we decided to cross the Otira River and to follow the road towards Morrison Footbridge. We just couldn’t see any more stones. We crossed the footbridge and continued another 1,5 kilometer before pitching out tent. While we went for a swim, it started to thunder, making us retreat in our tent. 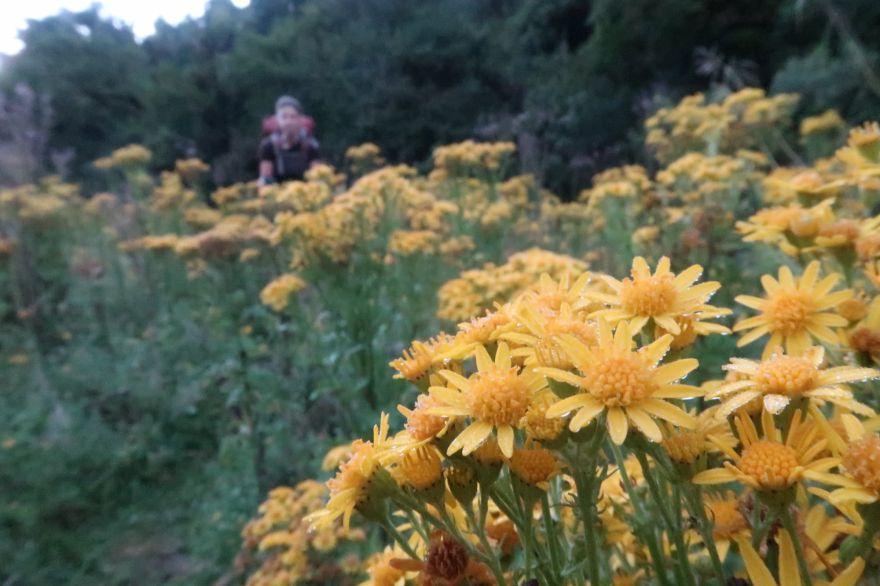 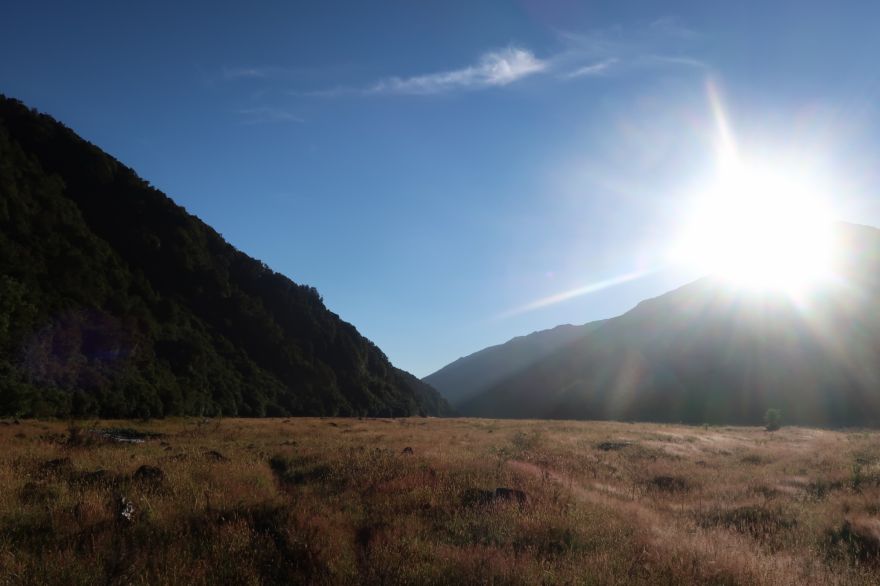 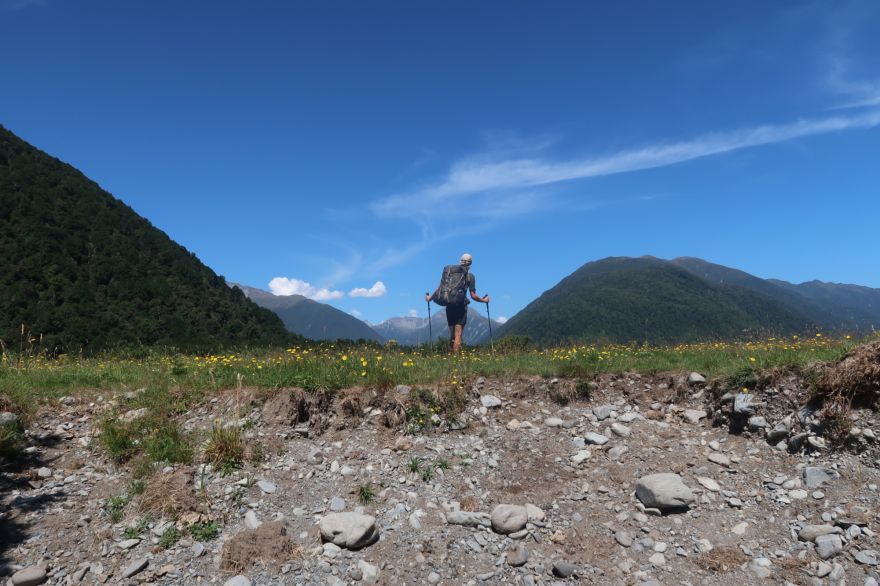 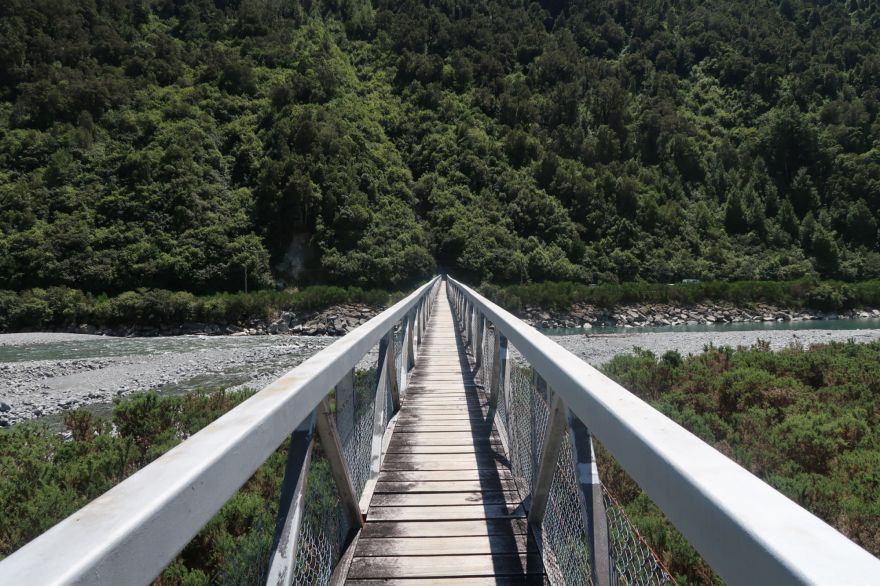 We were being attacked by thousands of sandflies when we tried to pack our tent. We finally ended up wearing our rain gear, hat and gloves to make it a little more bearable.
After leaving our campsite near the Morrison Footbridge (327 meter), we followed the Deception River. In contrast to yesterday, the track through the Deception River was well marked. However, this didn’t make it much easier than yesterday. We still had to cross the river multiple times, climb over large boulders and descend a 3 meter tall vertical wall. This, however, we skipped as we just walked through the river instead. Around 11:30am, we arrived at the Upper Deception Hut (757 meter), where we stopped for a lunch break.

After lunch, we continued towards Goat Pass. The river narrowed and the grade got steeper. We had to climb over massive rocks and cross the river several more times. It was slow-going from, but the scenery was absolutely stunning. Around 2pm, we arrived at Goat Pass Hut (1.057 meter). We hesitated whether to continue to Arthur’s Pass, but we were enjoying the views so much that we decided to stay. 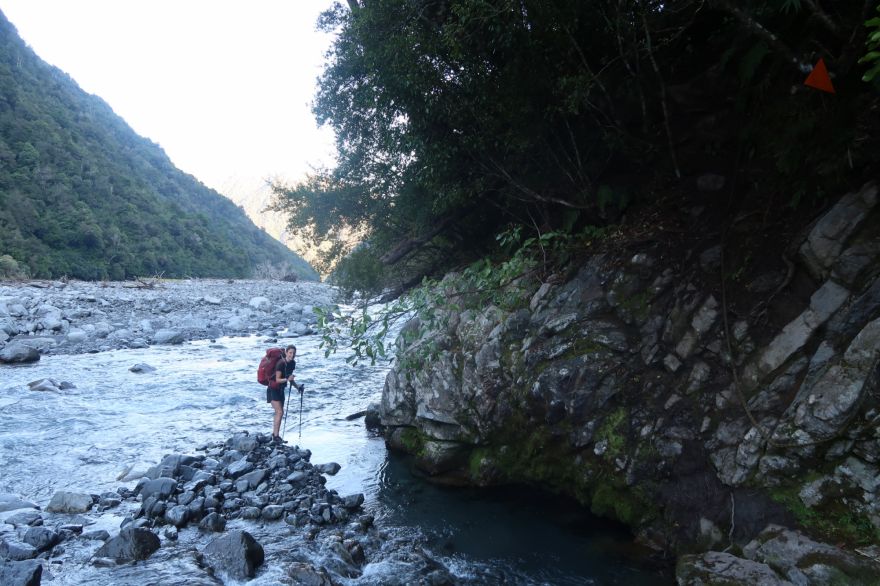 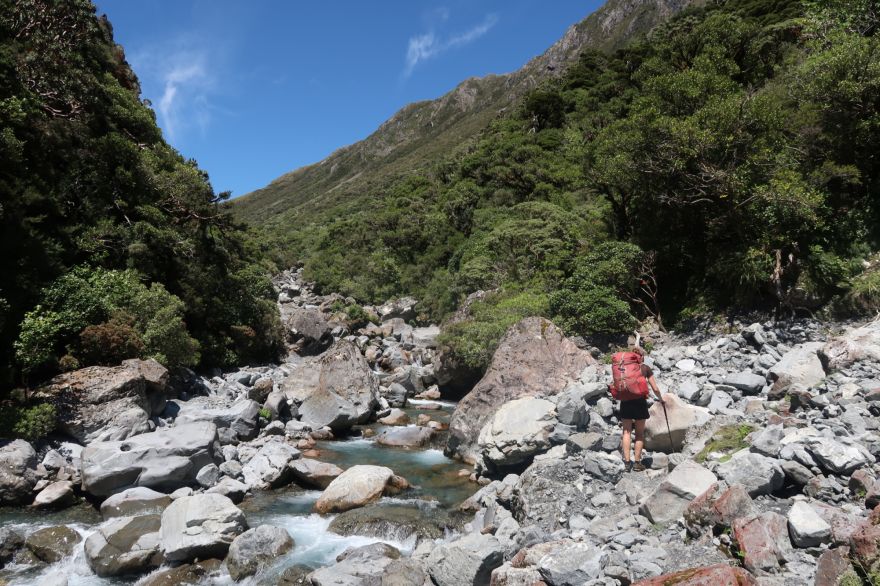 We woke up because someone had just entered the hut. We heard this person signing the intentions book and leaving again. When we got out of bed, we read that this person had written down that he hoped to be out of the Taramakau River Valley before the bad weather would arrive. We were not really sure what this person was referring to, but it didn’t sound good. When we looked outside, we didn’t see anything because of the fog. We could therefore not tell what the weather would be. We therefore left and just started to walk. We followed a boardwalk across Goat Pass. When the track started to descend, the fog slowly disappeared and a clear blue sky appeared instead. It was pleasant and easy walk all the way to Bealy River. We safely crossed Bealy River. When we arrived at the State Highway, a car stopped and a fellow Te Araroa hikers stepped out. Florian, whom we have met before, explained that he was going for a short drive with Wayne. They offered us a ride, but we wanted to go to Arthur’s Pass. They promised to pick us up if we would still be here if they were on their way back. Half an hour later, no other car had stopped, when Wayne and Forian returned. They gave us a ride into Arthur’s Pass. While driving, Wayne told us that there is a cyclone approaching New Zealand. Presumably, that was the weather the hiker mentioned in the intentions book.
Wayne dropped us at the visitor information. We walked over to the youth hostel, to collect our last food parcel (yeah, this one had also arrived). Unfortunately, the hostel was full. We therefore searched on the internet for something else and eventually found a bed & breakfast. This turned out to be a Te Araroa hikers heaven. 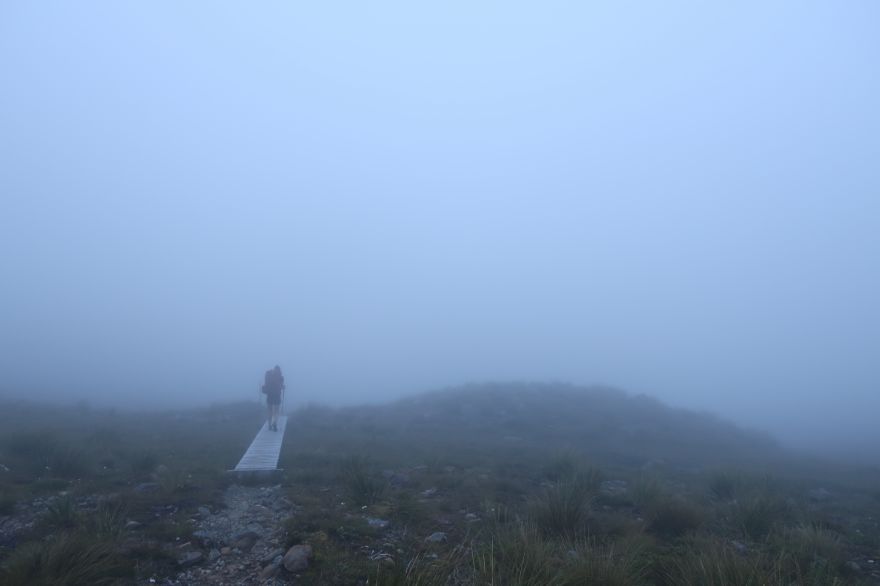 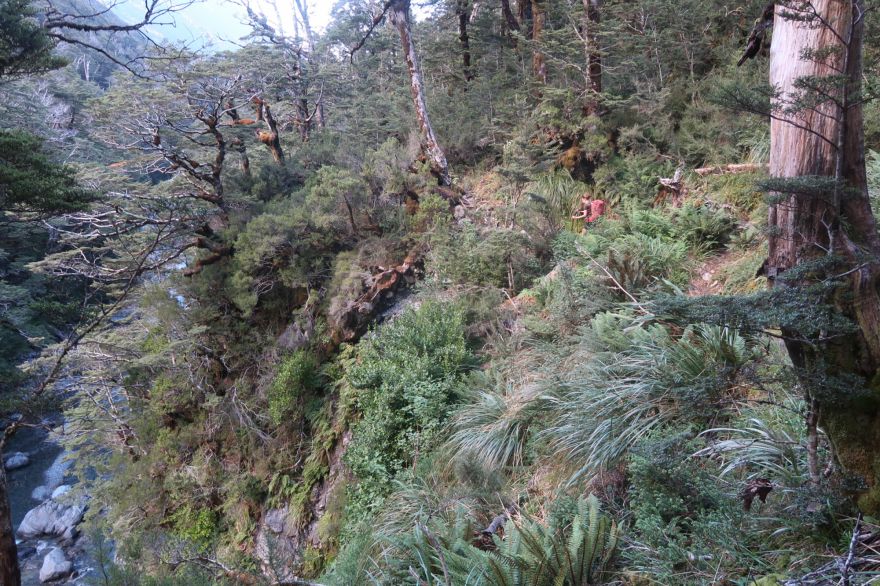 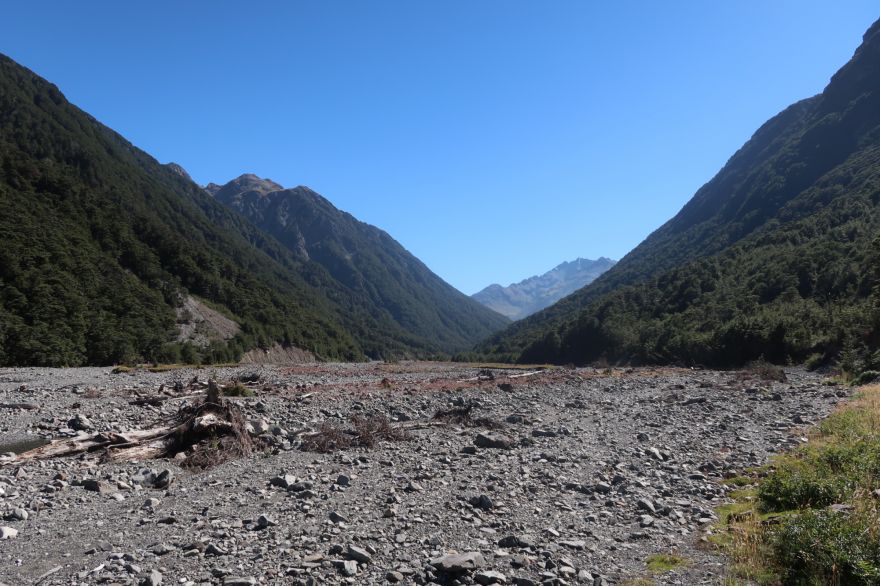