Because bad weather was predicted (a cyclone would hit the South Island on Thurday), we decided to take a rest day in Arthur’s Pass and sit out the storm in a mountain hut near Arthur’s Pass. Wednesday, we therefore had some time to kill in Arthur’s Pass. We hesitated to climb Avalanche Peak (according to the Lonely Planet, one of the best day trips). However, we decided to take a real rest day and not to walk up a mountain. We were glad we didn’t climb Avalance Peak, as it started to rain around lunch time. At the B&B where we were staying, we were given a great breakfast (although we were the first guest that actually finished the entire breakfast…), had a free lunch and were offered to eat unlimited fruit.

Was that a car door?

Thursday, we planned to make our way to Bealy Hut. Bealy Hut is located south of Arthur’s Pass and just off State Highway 73. Wayne had mentioned that he would be drive to Bealy Hut between 9 and 9:30am. We therefore walked over to his house. Wayne invited us into his house. Florian, a French hikers was staying with Wayne and was also sitting inside. While Wayne offered us a tea, we watched the river opposite Wayne’s house change from a small stream to a wide river. Eventually, Wayne drove us just after lunch time to Cora Lynn Road. During the 5 minute drive, we noticed that several rivers, including Bealy River, were flooded. Wayne carefully steered his Range Rover clear of fallen trees. When Wayne drove onto Cora Lynn Road, he could barely avoid a collision with a fence being blown onto the road. A few meters further down the road, Florian got out of the car to open a gate. However, as soon as he opened the door of the car, the wind got hold of the door. One hinge broke and the door got stuck in a position next to the engine hood. Poor Florian. However, Wayne didn’t really seem to bother. He just kept saying he was well insured.
We said goodbye to Wayne and Florian and made our way to Bealy Hut. Within 5 minutes, we arrived at the hut. As we arrived, we saw multiple trees that were pretty close to the hut coming down. We questioned whether the hut would be a safe location, but as we found out that there were already 5 persons inside sheltering from the storm, we figured it would be ok. 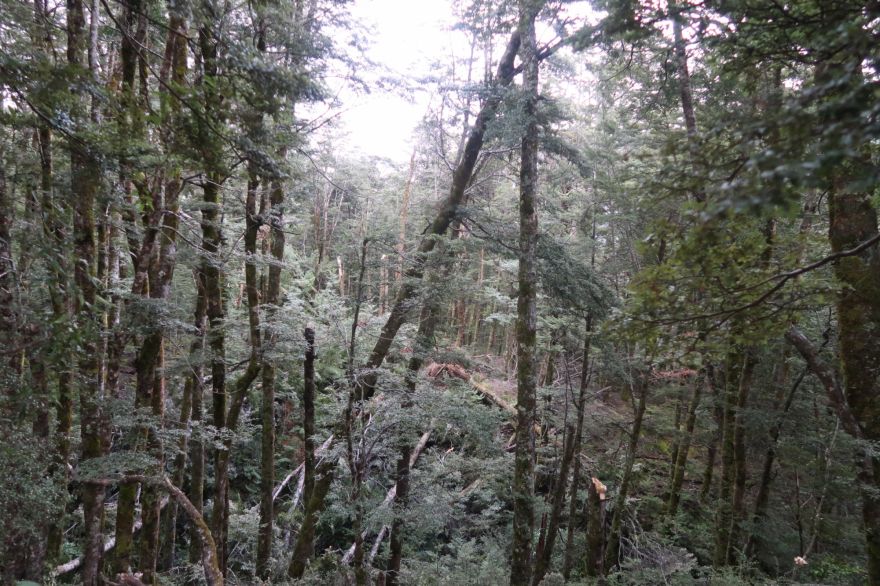 A day to relax

When we finally left Bealy Hut, is was pretty chilling. For the first time while hiking the Te Araroa, we actually started the day wearing our sweater, jacket, hat and gloves. Because of the cyclone, the track was covered with trees and branches. Because of al the mud, some sections were also rather slippery. Jasper fell once. Shortly after, Marjon also fell. She had a nasty cut on her leg that we treated the best we could.
After about two hours, we arrived at the Lagoon Saddle Shelter and Hut. Until that time, we haven’t had any views. But the weather started to improve as the sun came out. We continued through forest and riverbed to West Harper Hut. This is a basic hut (with a mud floor) where we stopped for a lunch break.
We continued through the forest. We had to cross several streams. One stream was very tricky because of the strong current. When we arrived at the first of two suspension bridges, we again were confronted with the damaging effect of the cyclone: a tree had fallen on the suspension bridge. Luckily not on the bridge itself, but on the steel wires where the bridge is anchored to the ground. We therefore had to climb over and through the tree in order to get off the bridge. Once we both safely got across, it was just a few more minutes to Hamilton Hut. 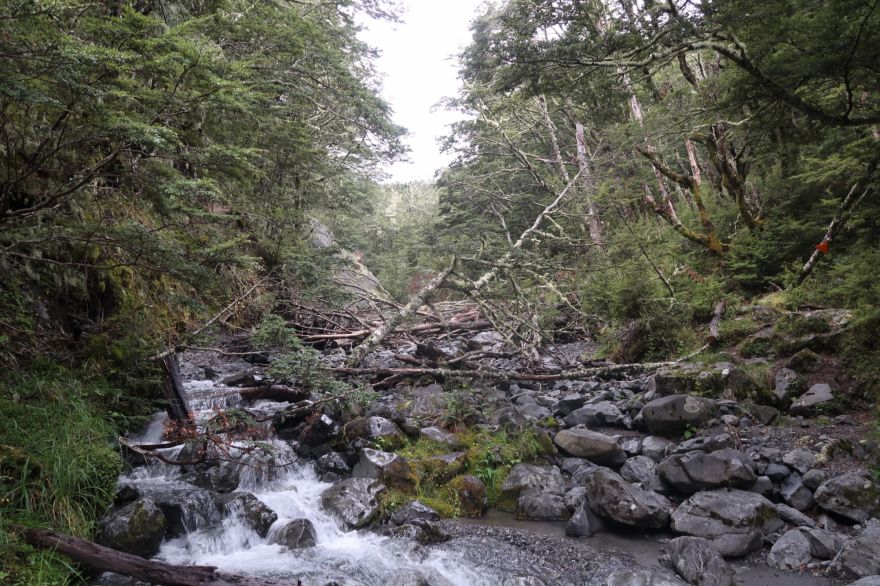 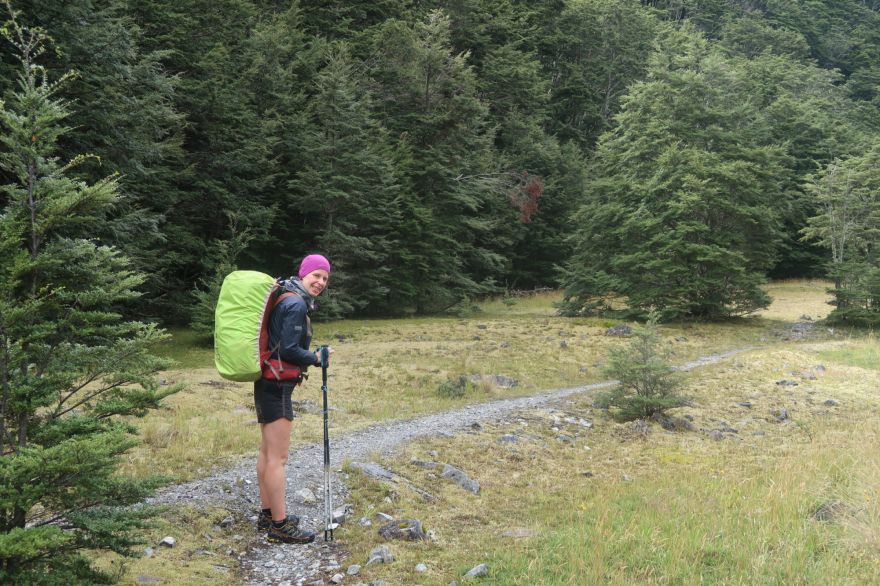 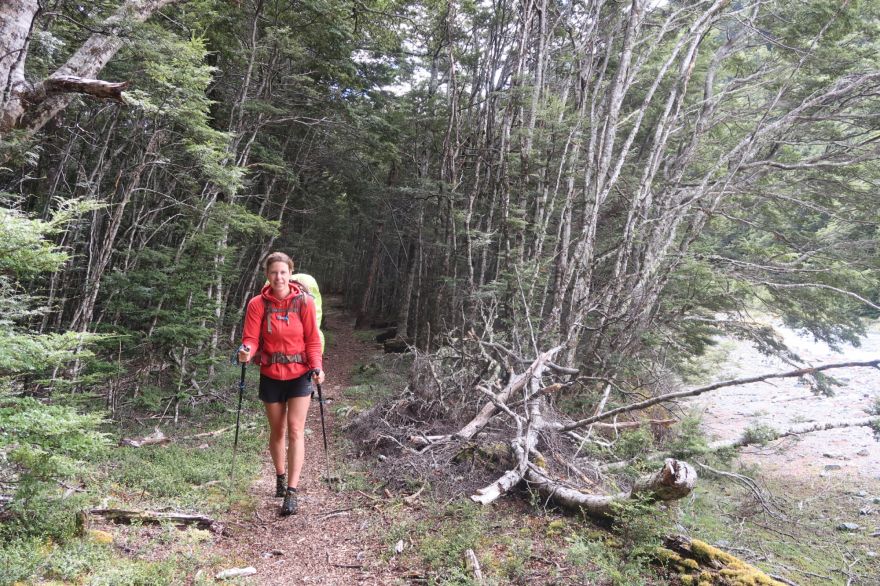 That is a strong current!

Three days after cyclone Fehi, we had good hope that the Harper River would be crossable. Once we left Hamilton Hut, we had about 20 crossing ahead of us. We soon arrived at the first location where the track crossed Harper River. Although the current was strong, we safely got across. A few crossing later, the current was too strong, and we had retreat and find another place to cross. We found this some 100 meter upstream. Because the track was not well marked, we searched for our own track in order to avoid two or three crossing. Sometimes, however, crossing were inevitable. After passing the Pinnacles, we crossed the Harper River one more time. We thought that we were done for the day, but apparently, we had saved the best for the last. We had to cross the Avoca River, which was much stronger than the Harper River. Together with other Te Araroa hikers, we searched for a good spot to cross. We when thought we had found one, we slowly got into the water. Because the water was a bit milky, we couldn’t see how deep it actually was. We moved slowly through the water. Although it was only knee-deep, the water splashed up until hip level. With every step, the current tried to sweep us away. Luckily, we safely managed to get across, just.
From the Avoca River, we followed a 4wd track along farmland. While we stopped for a lunch break, it started to get really windy. With a strong headwind, we continued to Harper Village where we pitched our tent at the local campsite. 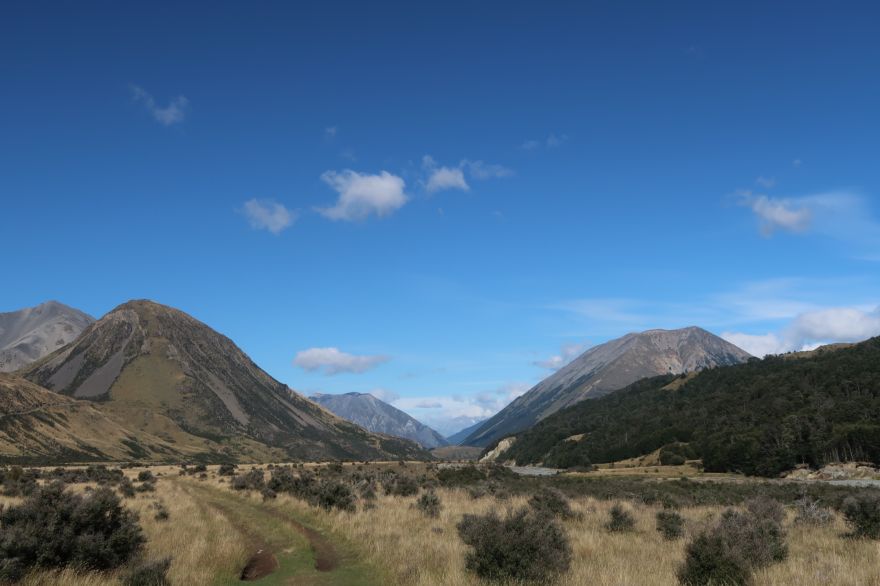 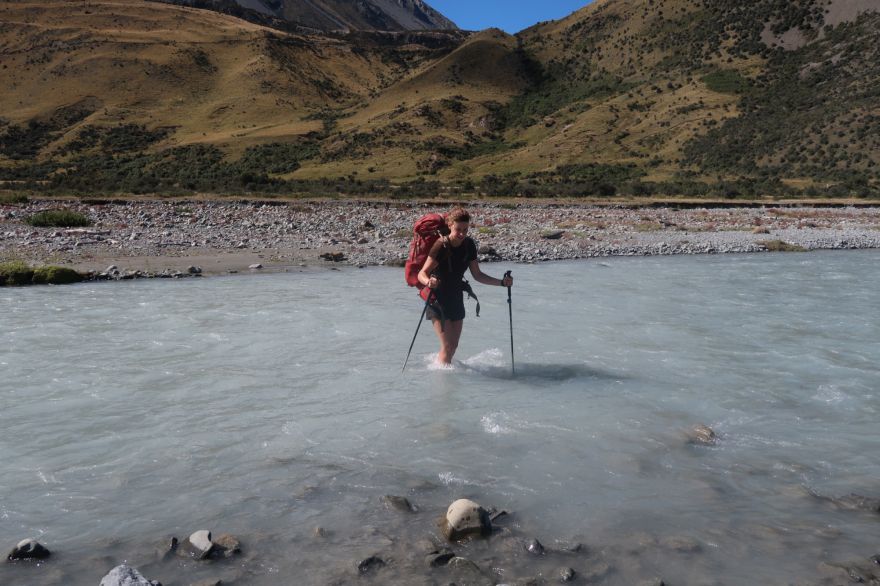 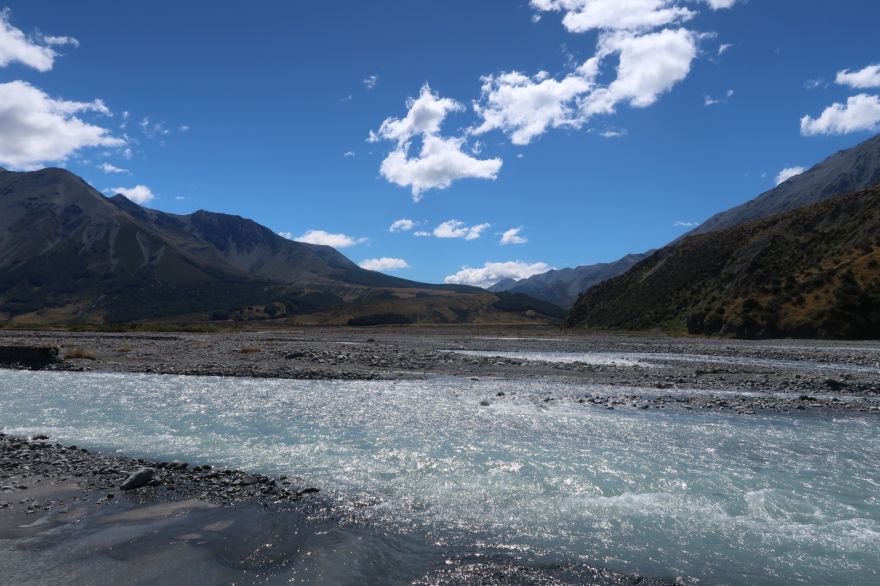 We woke up by the sound of rain falling on our tent. We didn’t look forward to walk a 22 kilometer long gravel road in the rain and therefore decided to wait an hour. When the worst rain had stopped, we starting packing. Eventually, we left Harper Village around 8:30am. After about half an hour, we saw the famous traffic sign warning for Te Araroa hikers. We took a quick few photos before continuing down the road. We soon got stuck behind a large herd of sheep. One young fella with four dogs was able to keep the hundreds of sheep under control. Amazing to see how disciplined these dogs are. After a while, he allowed us to pass the sheep and we continued on our own pace again. We walked about 10 kilometer, when a car stopped and offered us a ride. We generously accepted their offer. However, they were not on their way to Lake Coleridge, so we had to get out at the first junction (12 kilometer further). From the junction, we continued along the Te Araroa. We followed the trail through a number of paddocks, before continuing along a narrow path on the shore of Lake Coleridge. We followed a 4wd road running parallel to the official trail. After another gravel road, we followed a short trail to the power plant. We were rewarded with a beautiful view at the Rakaia River. Unfortunately, the Rakaia River is not crossable and we therefore planned to hitch to Methven. We noticed a few cars that looked familiar. And they were: it was a group of friends whom we met at the campsite yesterday evening. We asked if they could give us ride. They immediately said we could climb in the back. Well, in the back we found one mattress. Marjon therefore jumped in the front seat while Jasper took the bed.
When we arrived in Methven, we first searched for accommodation. Subsequently, we arranged transport for tomorrow morning: we want to get back to the Te Araroa trail on the other side of the Rakaia River. Although tomorrow is a public holiday, they will let the school bus run especially for us. We can therefore get a ride with the school bus back to the Te Araroa trail. We then arranged a shuttle for when we will arrive at the Rangitata River (in a few days time). As the Rangitata River is also not crossable by foot. When everything was sorted, we could do some shopping and went out of dinner. 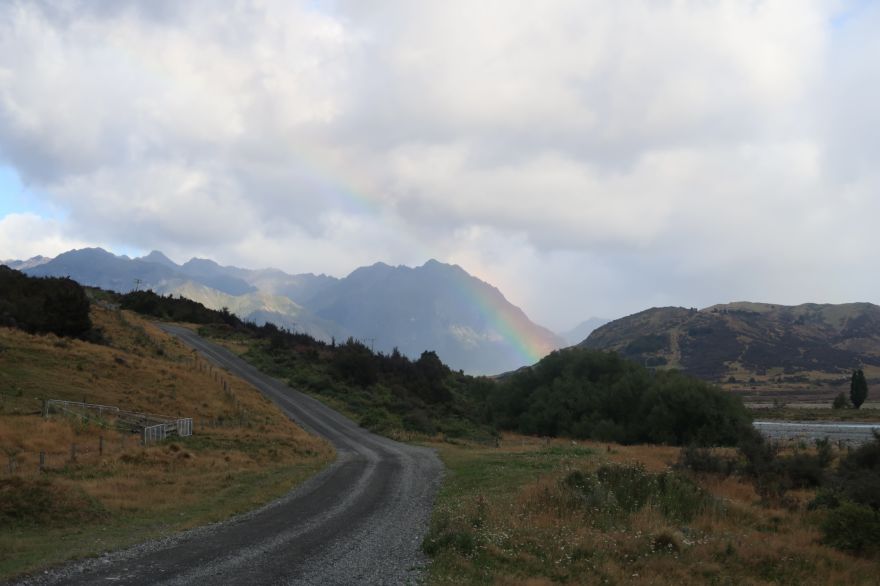 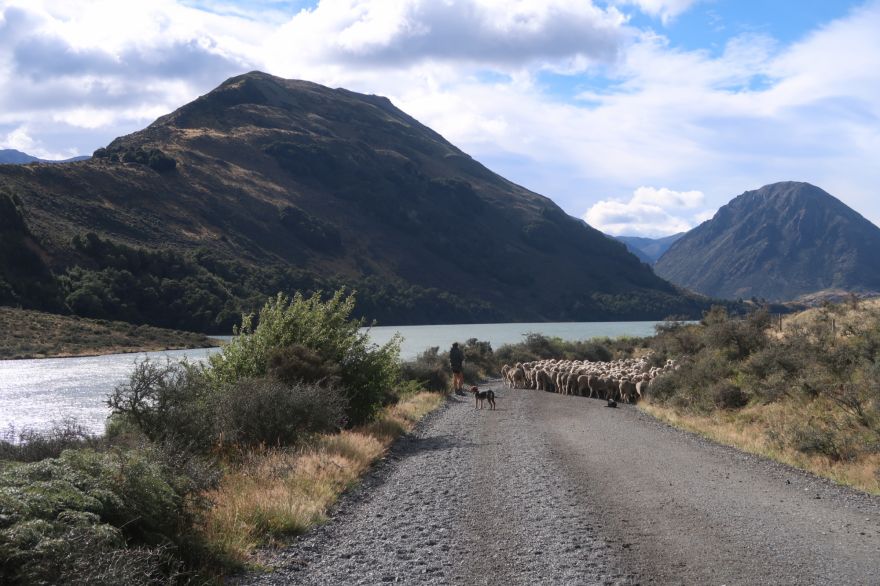 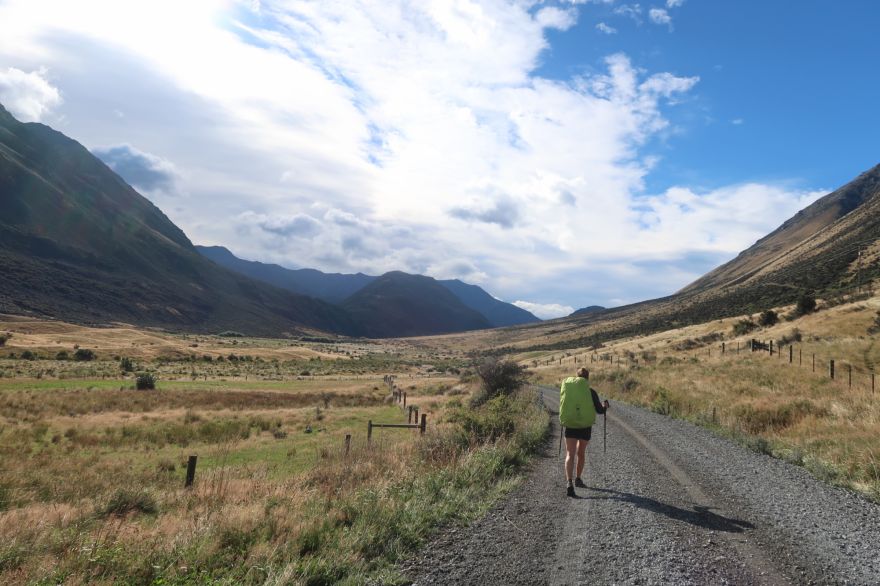 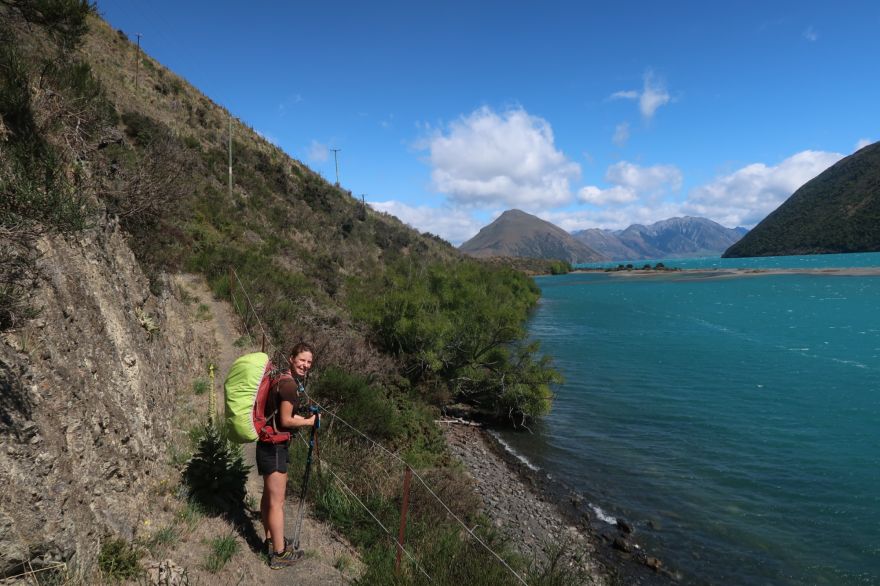 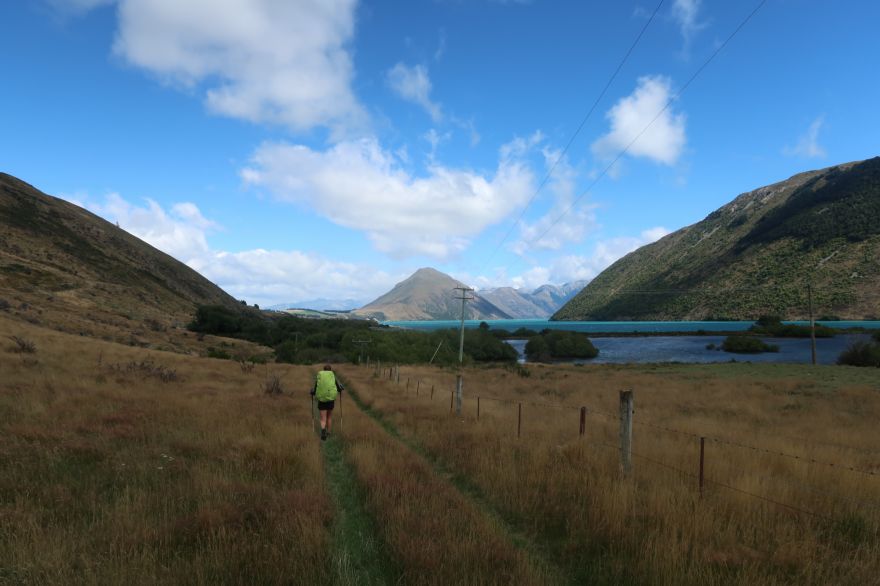 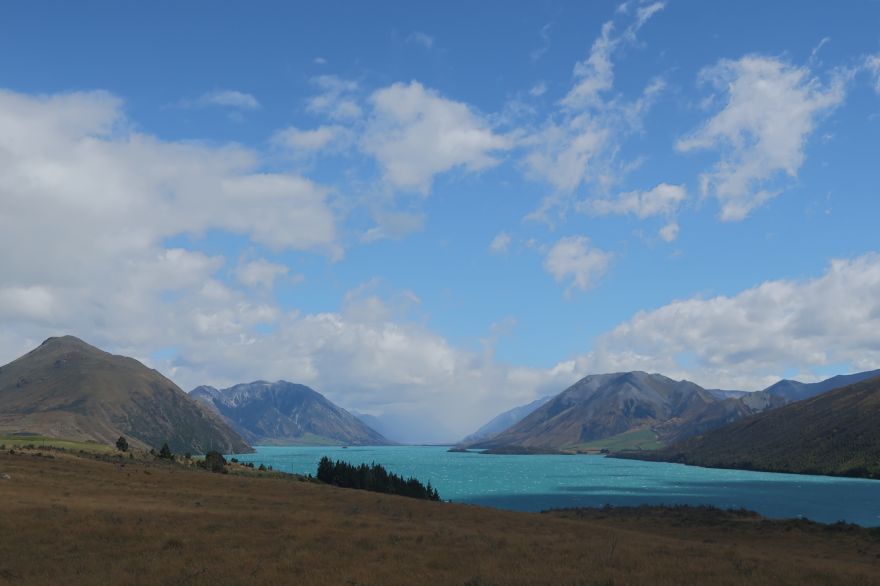 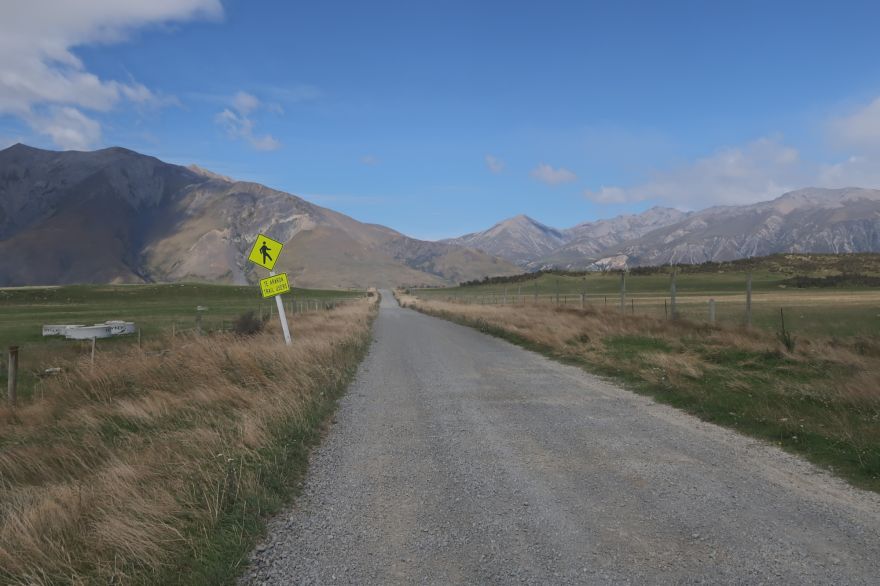 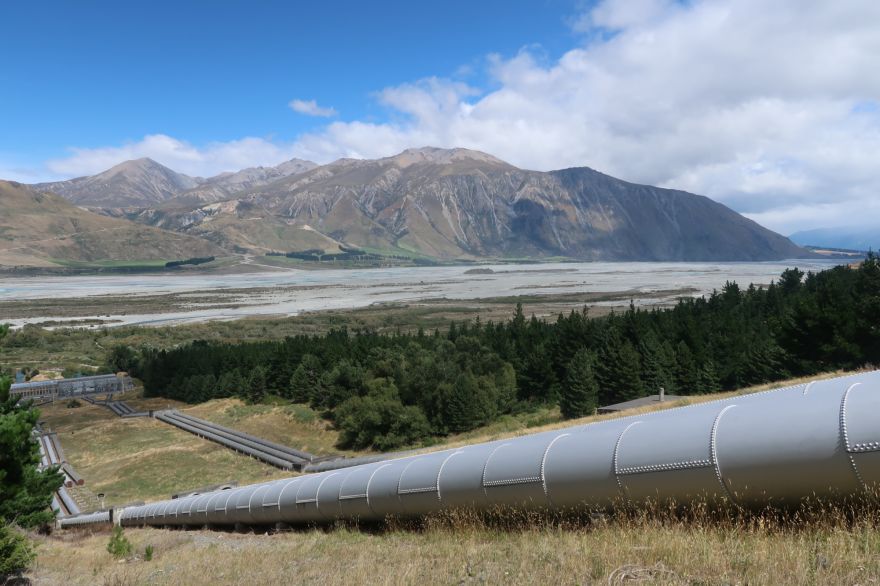