From the Routeburn Shelter, the track gently winds alongside the crystal-clear Route Burn river. After crossing several (suspension) bridges, we arrived at the Routeburn Flats about one-and-a-half hour after leaving the Routeburn Shelter. From the open grassed flats, we got a good view of the surrounding mountains. With the early fog above the grass, it was a picture perfect scenery. 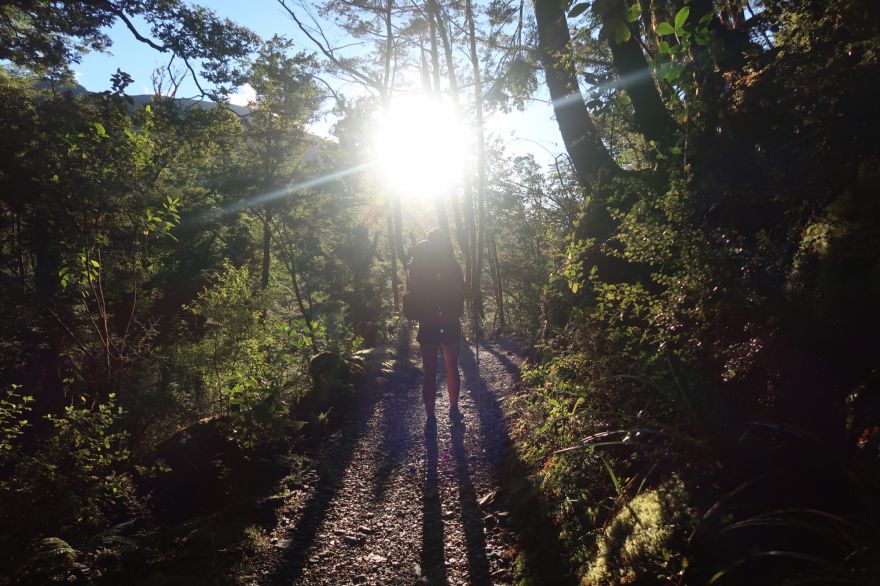 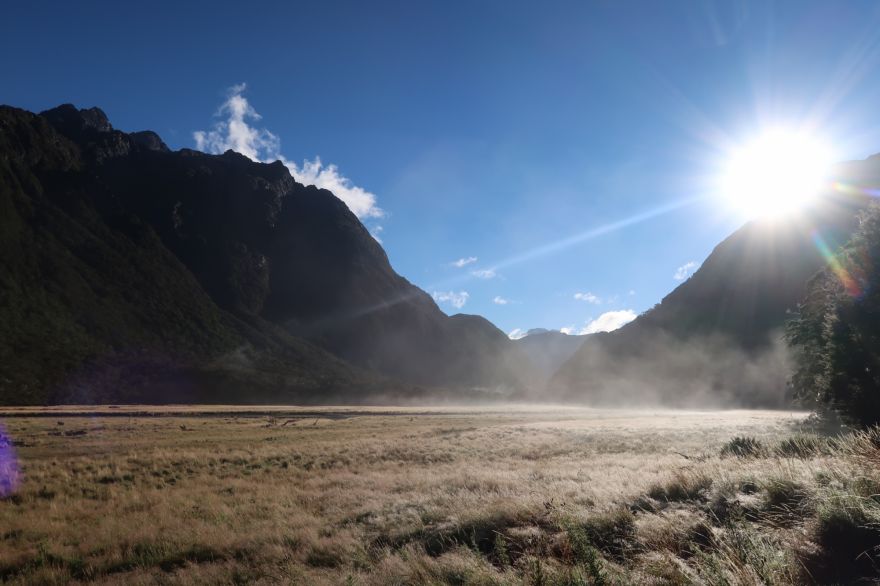 Up until the Routeburn Flats, the track was very easy (very easy tramping). However, leaving the Routeburn Flats behind, the track started to climb. For untrained people, probably quite steeply. While the sweat was dripping from our nose, we arrived at the Routeburn Falls. When the track made one more turn, we saw a huge building. On the right side of the track, we noticed the DOC hut. On the left of the track, we saw a private lodge. And it was massive. We quickly continued and took a break on a rock just below the Routeburn Falls.
After our break, we climbed a few steps and arrived in an open valley. We followed the track (which sometimes consisted of a board walk) through wetlands and tussock-covered flats towards the highest point on the track at Harris Saddle (1.255 meter). Until here, the weather had been perfect. However, Harris Saddle was covered in clouds once we arrived. We had no views at all.
Near Harris Saddle, we took our lunch break in the emergency shelter. However, when this shelter was taken over by a large group of tourists, we quickly fled outside. Because of the clouds, there was still no visibility. Just before arriving at Lake McKenzie, the clouds cleared and we could enjoy the spectacular scenery we were walking in.
After a short break at McKenzie Hut, we continued south. According to the elevation profile, the track should go down from here. However, it actually was one large roller coaster from here: very short sections that went up and down. Although we walked in the forest, we had splendid views towards the east. What a beatiful scenery. However, the biggest eye-catcher of the day was probably the 174 meter tall waterfall we passed. Just meters from the waterfall, we got soaked within seconds, but it was worth it. 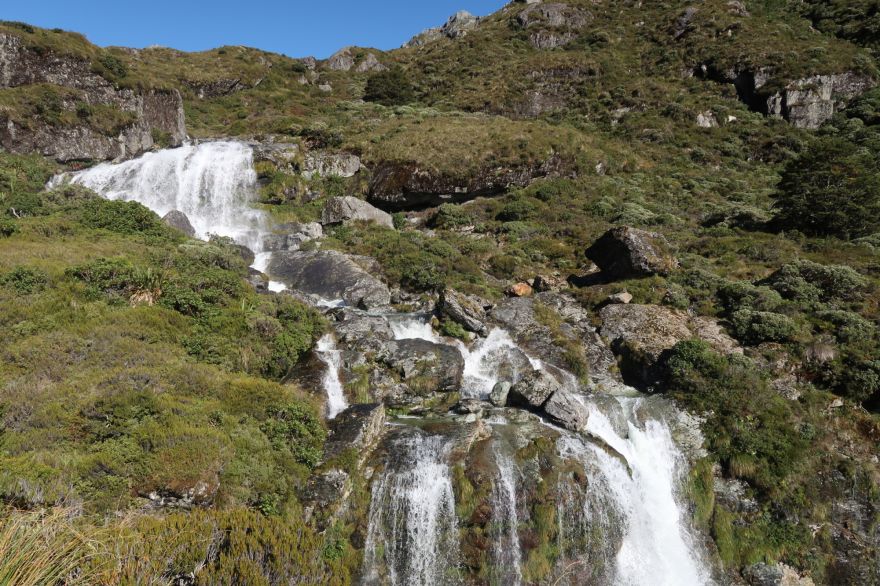 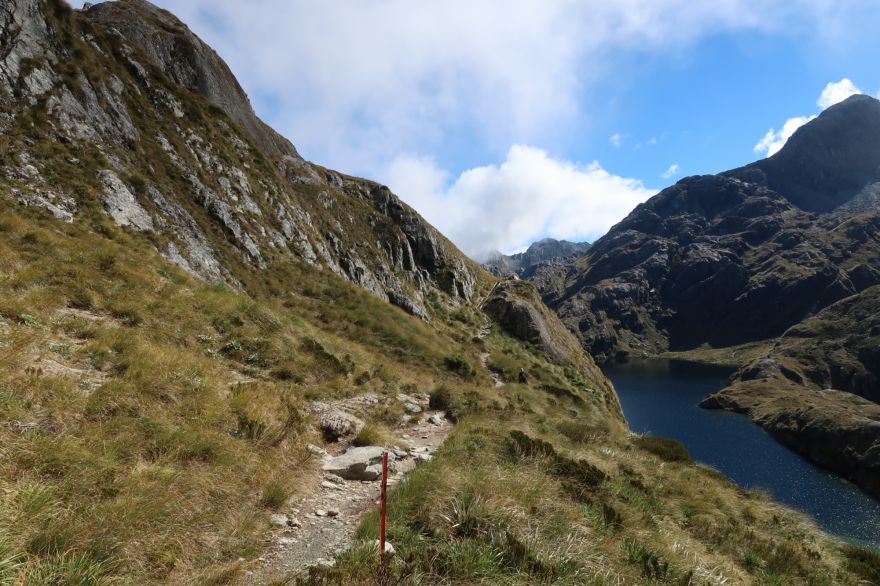 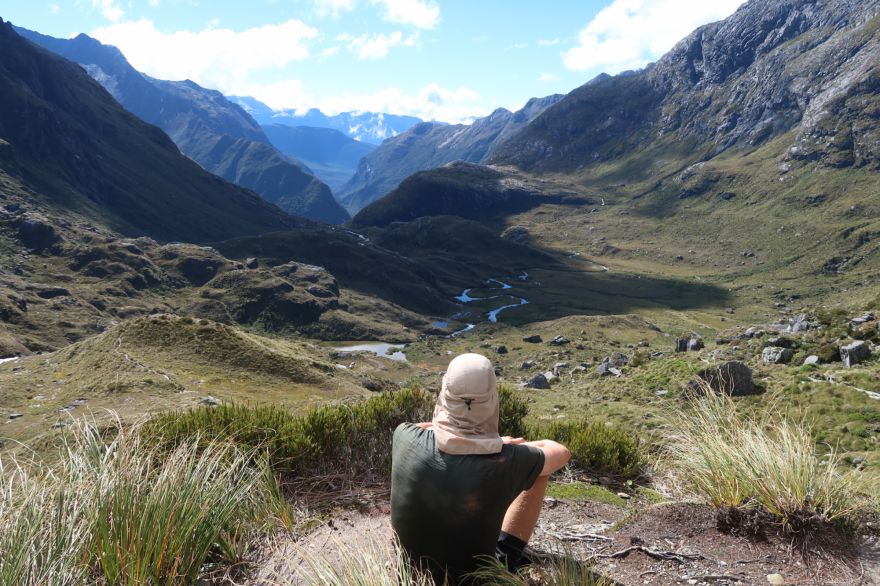 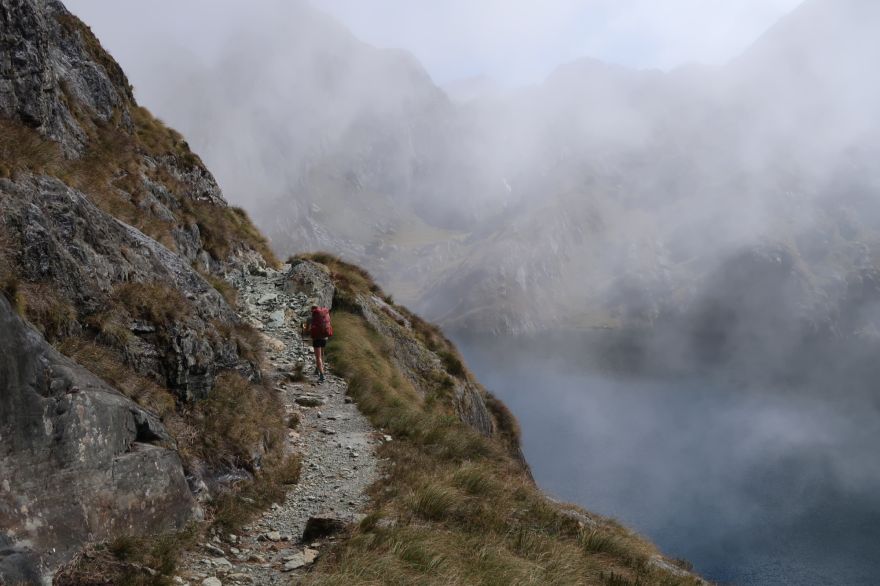 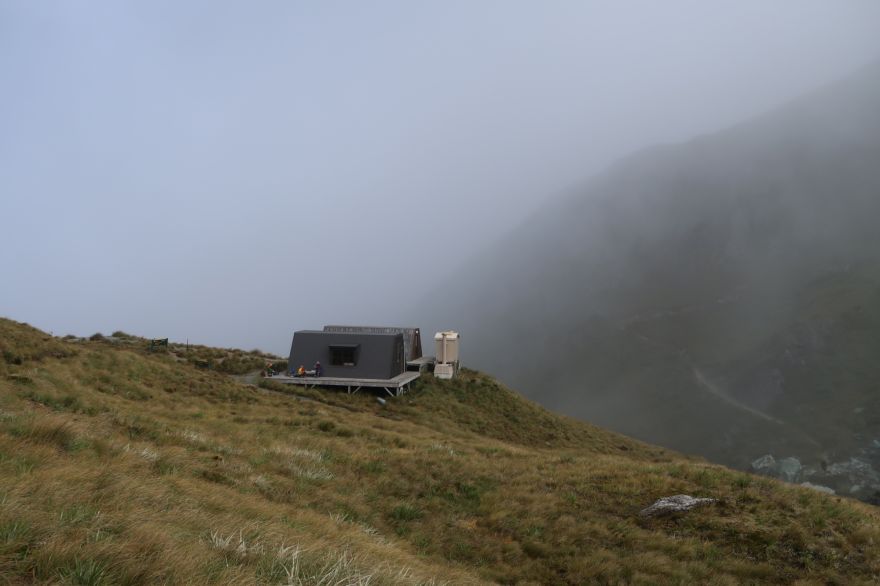 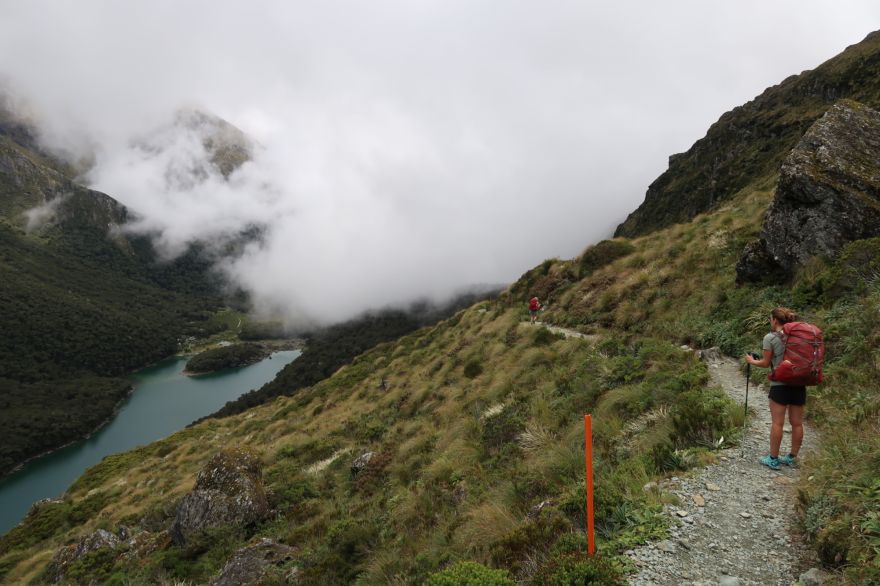 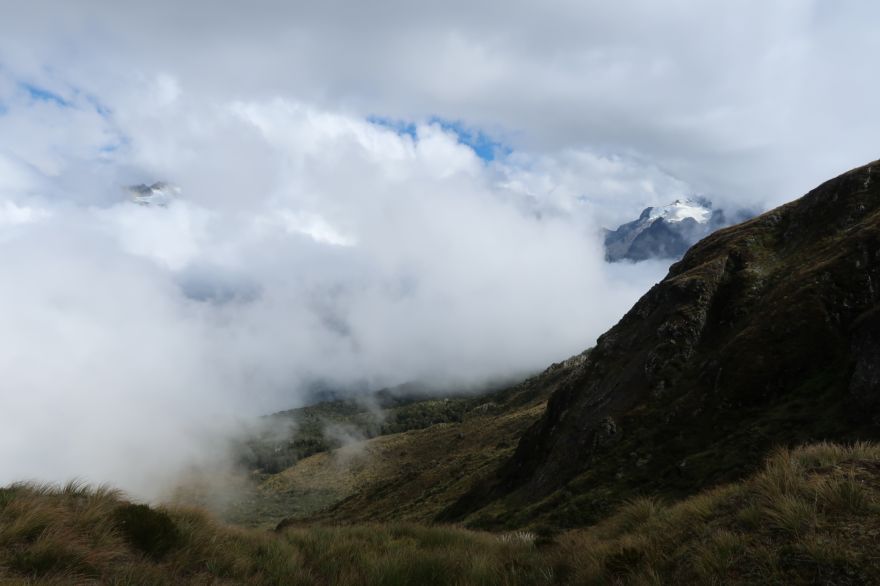 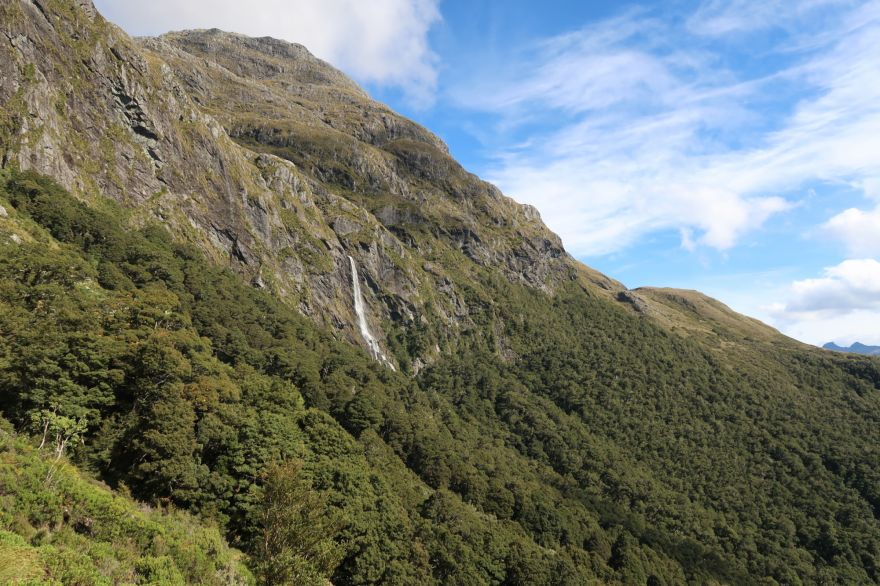 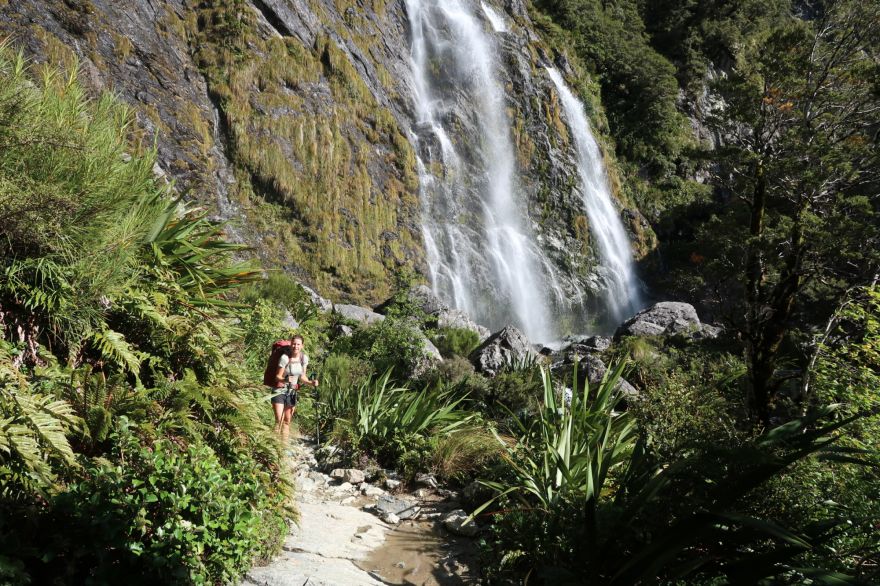 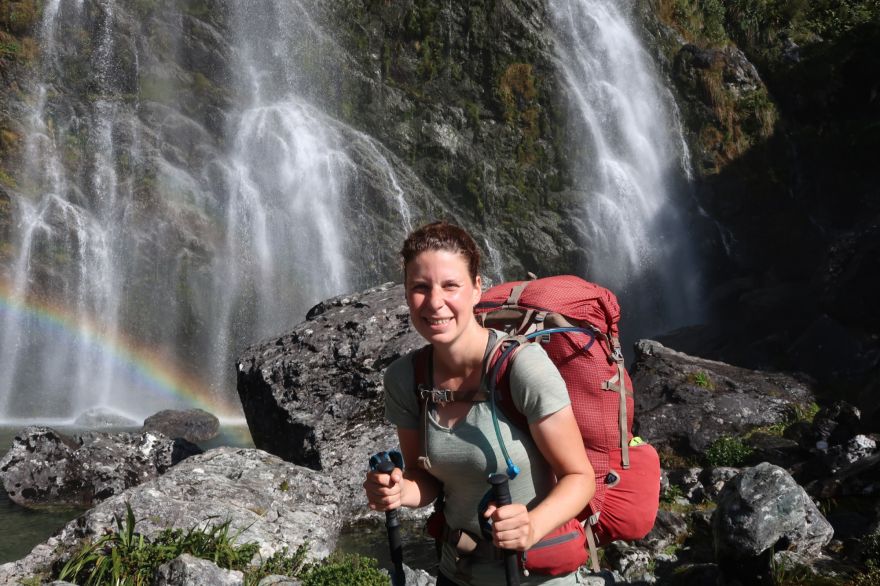 We continued through the forest and shortly after, we arrived at Lake Howden Hut. From here it is not much further to the terminus of the Routeburn Track at The Divide. However, we turned left at Lake Howden Hut, leaving the Routeburn Track behind. We followed the track towards the Green Stone Saddle. We had planned to camp near the saddle, however, as it was still early, we decided to continue to McKellar Hut (along the Greenstone Track).

Officially, it is recommended to hike the Routeburn Track in 2 – 4 days. Accommodation is available at the Routeburn Flats Hut/Campsite, Routeburn Falls Hut, Lake McKenzie Hut/Campsite, Lake Howden Hut/Campsite. All accommodation along the Routeburn Track has to be booked in advance. Freedom camping is not allowed and not recommended (unless you want to be fined). For those that can spend a little more, next to the Routeburn Falls and Lake McKenzie Hut are private lodges. Some say that a guided tour with a stay in these lodges will cost you about NZ$ 1.500,-. This included food, a bed and shower. So you only have to bring your own clothes.
However, you can also hike the Routeburn Track without spending a night in one of the accommodations. From the Routeburn Shelter to Lake Howden Hut is about 30 kilometer, which we thought was not too hard to cover in one day. But we have to say that we are experienced and fit hikers that had – by that time – already hiked about 2.700 kilometer of the Te Araroa Trail.