Te Araroa: Stag Saddle (from the Rangitata River to Tekapo)

Friday morning at 8 am, Wayne came to pick us up from the holiday park in Geraldine. He drove us to the start of the Two Thumbs Track, which is on the other side of the Rangitata River from where he picked us up yesterday afternoon. We started walking around 9:50am. We followed Bush Stream upstream. Bush Stream is not a very big river, however, the current is rather strong. Wayno told us that he had driven a few other Te Araroa hikers earlier this week, but they were not able to cross Bush Stream and therefore had to walk through another valley to meet back up with the Te Araroa. Luckily, the current of Bush Stream was not to strong for us. After a few kilometer, the trail turned left and climbed a steep hill. After a short ridge walk, the track descended back to the river. We crossed Bush Stream one more time before ascending steeply to Crooked Spur Hut. 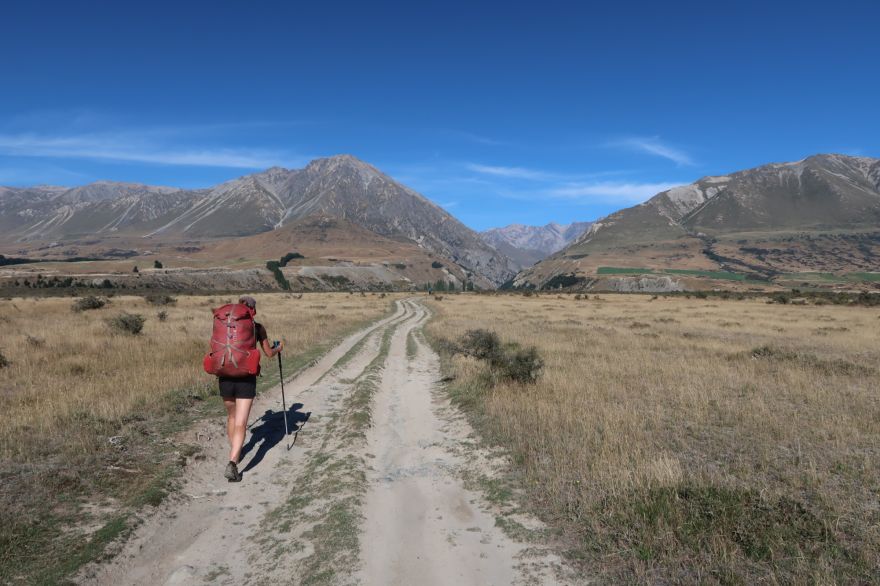 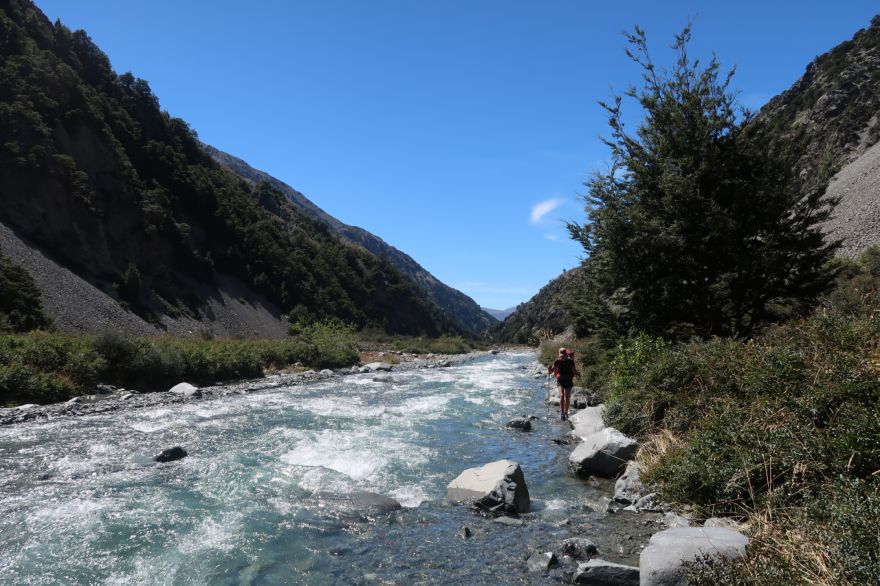 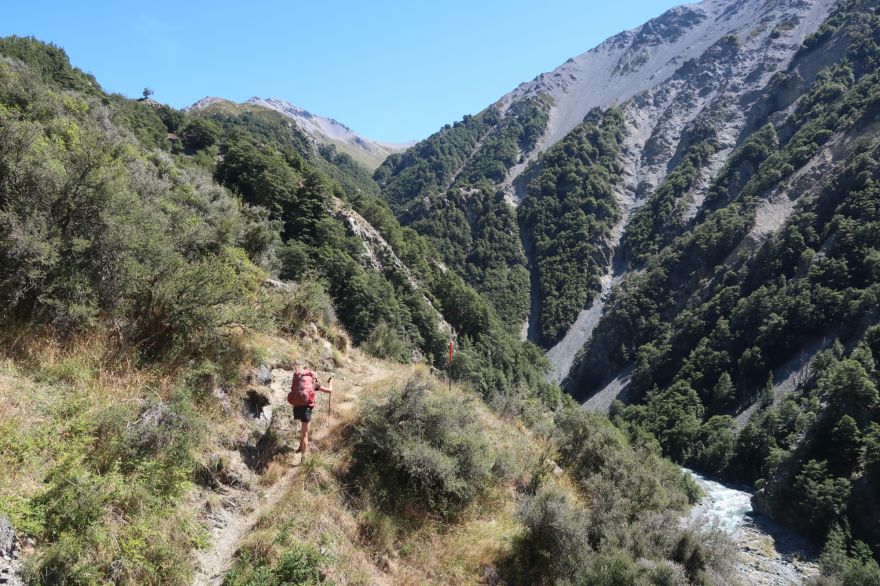 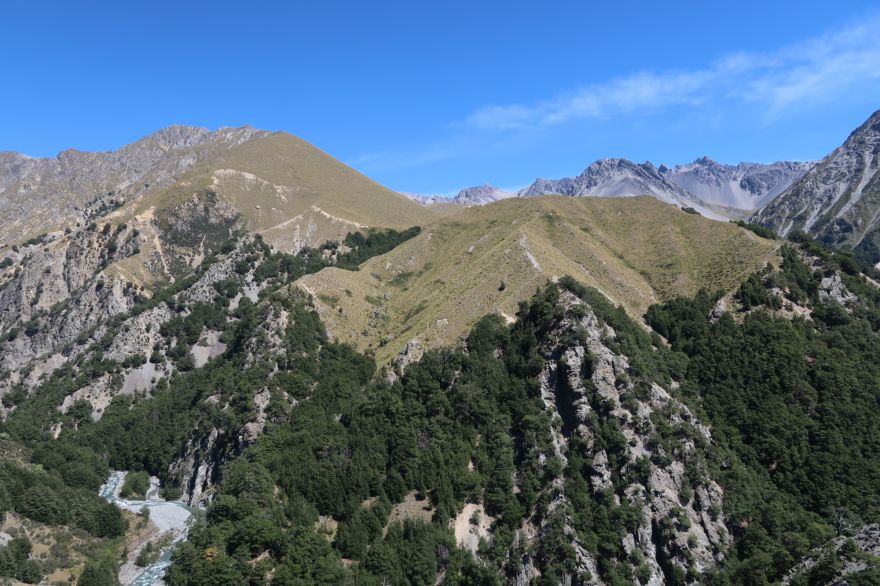 From Crooked Spur Hut, the trail continued its climb. One hour after leaving Crooked Spur Hut, we arrived at the saddle at 1.500 meter. The views were again stunning (yes, we know: it start to get boring). The descend followed a narrow track along a long scree slope. We climbed to another saddle and descended back to Bush Stream. We crossed the stream via an old stone farm bridge before arriving at Stone Hut (1.104 meter). 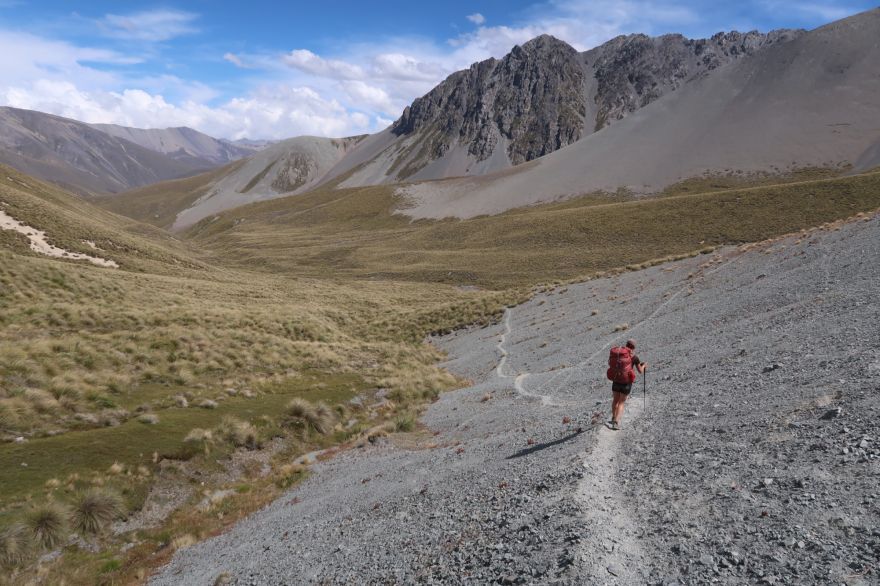 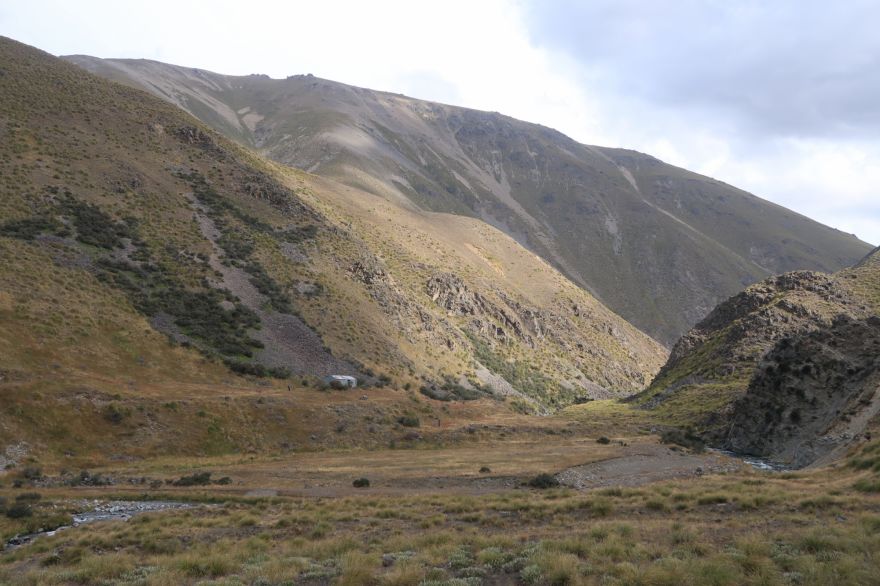 The weather forecast for Sunday was not looking very bright. Therefore, we wanted to make as much as possible today. We left Stone Hut at 6:45am. It soon became clear that there was a complete lack of marker poles. We often lost the official trail and had to find our own route through the tussock. Meanwhile, we crossed Bush Stream a few more times. After exactly 2 hours, we arrived at Royal Hut (named after the visit of Prince Charles and Princes Anne). 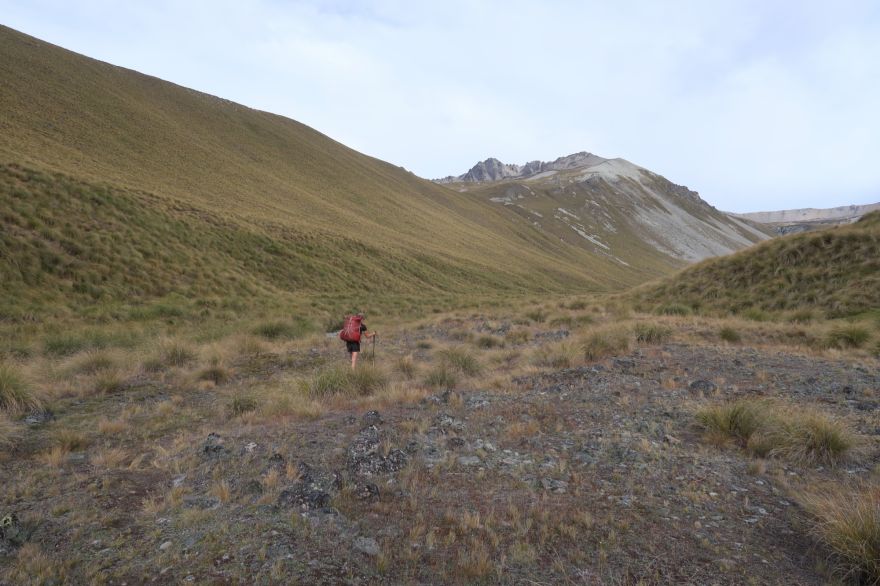 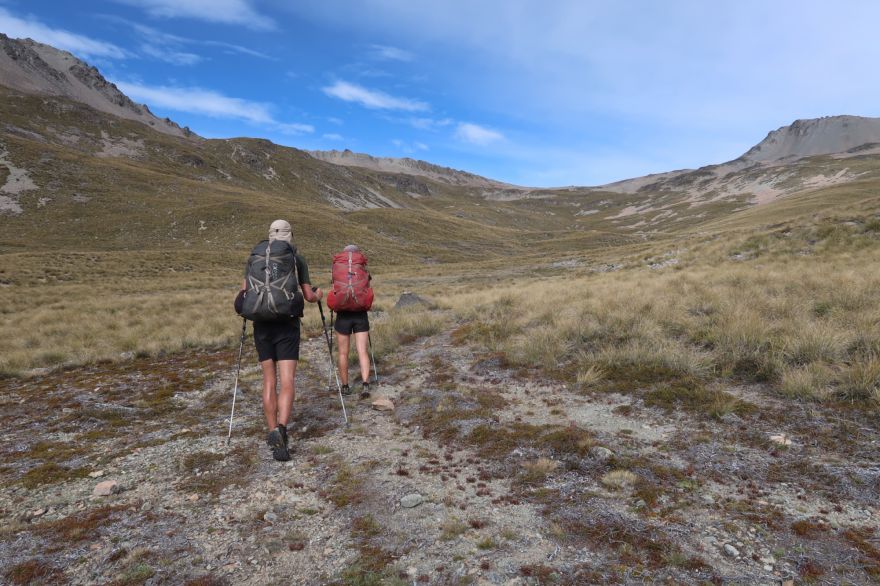 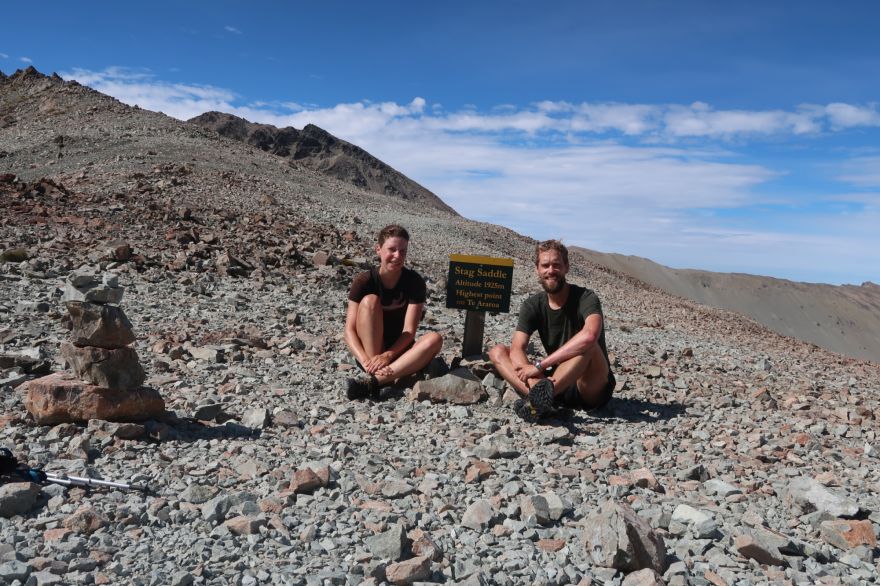 After a short break, we continued along Bush Stream. We followed the river 2 more kilometers, before the trail turned left. The track climbed steep to Stag Saddle. Two hours after leaving Royal Hut, we arrived at the t 1.925 meter high saddle and also the highest point of the Te Araroa Trail. After a long break at the saddle, we descended the ridge just right of Stag Saddle. We found a beautiful track with an easy downhill grade. In front of us, we could see the clear blue water of Lake Tekapo. On the right, we could see a massive mountain range with snow covered peaks that included Mount Cook. Two hours after we left Stag Saddle (and that is including a lunch break), we arrived at Camp Stream Hut. 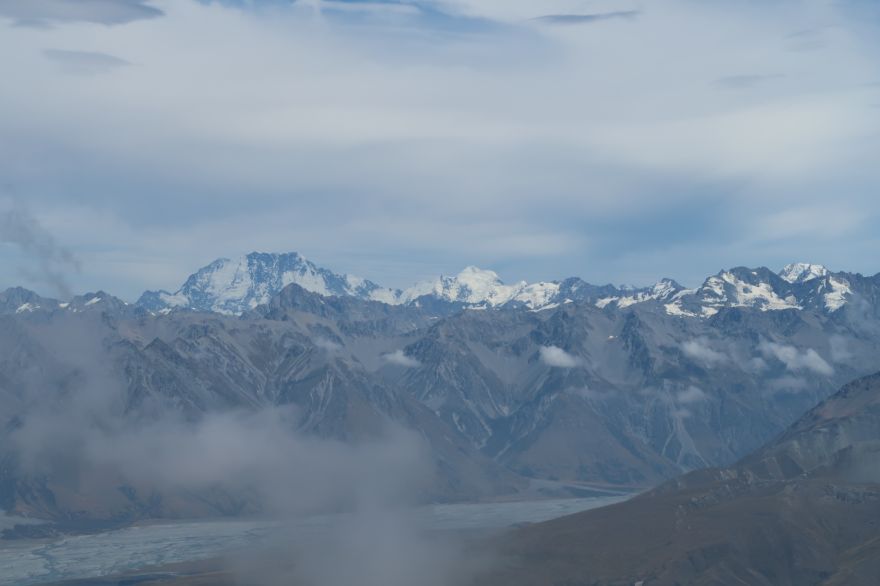 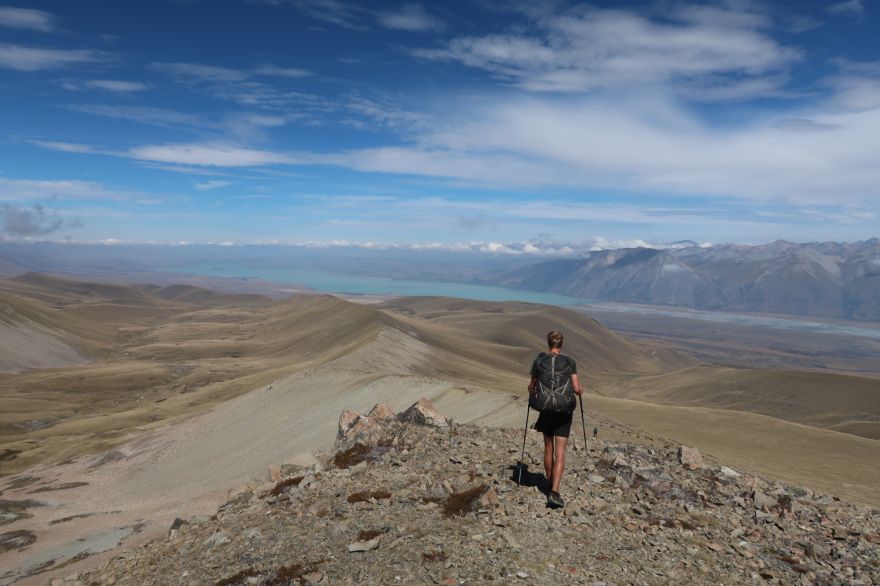 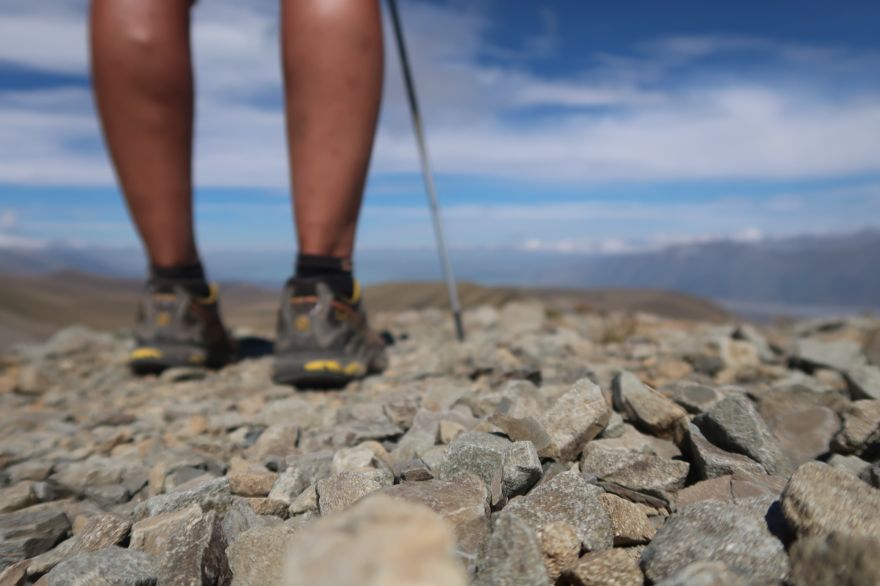 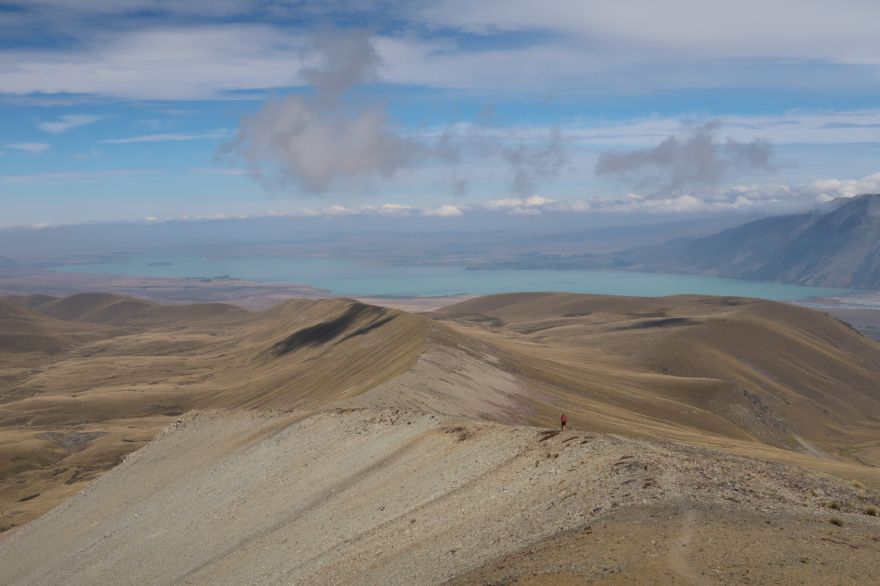 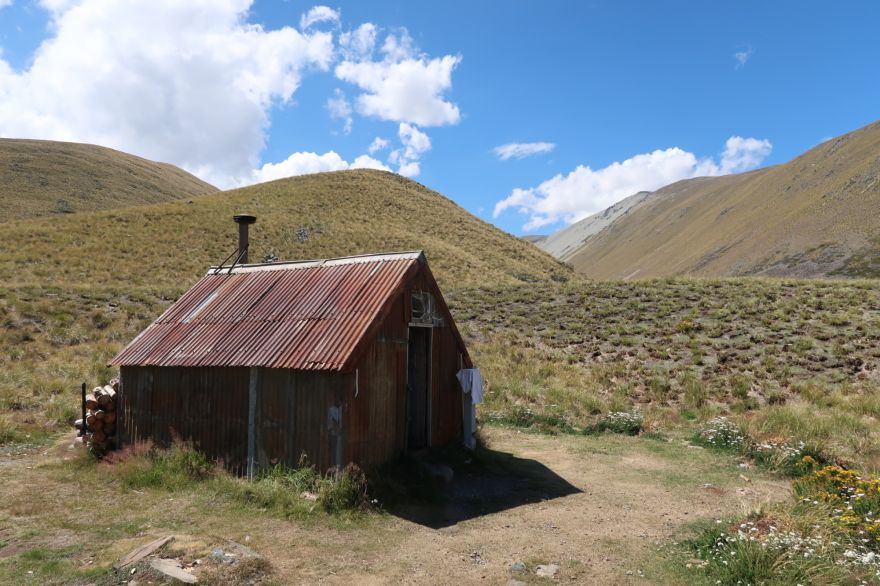 When we woke up Sunday morning, it was not raining whatsoever. We therefore packed our stuff and set off. After a few minutes, we had to cross a river. Before we crossed the river, we filtered our water and enjoyed our breakfast. While we were waiting for the water to run through the filter system, a wallaby suddenly showed up. We were just as surprised to see the wallaby as the wallaby was surprised to see us. When we tried to get our camera out, the wallaby ran off (sorry for the blurry photo). Later in the day, we would see three more wallaby’s. 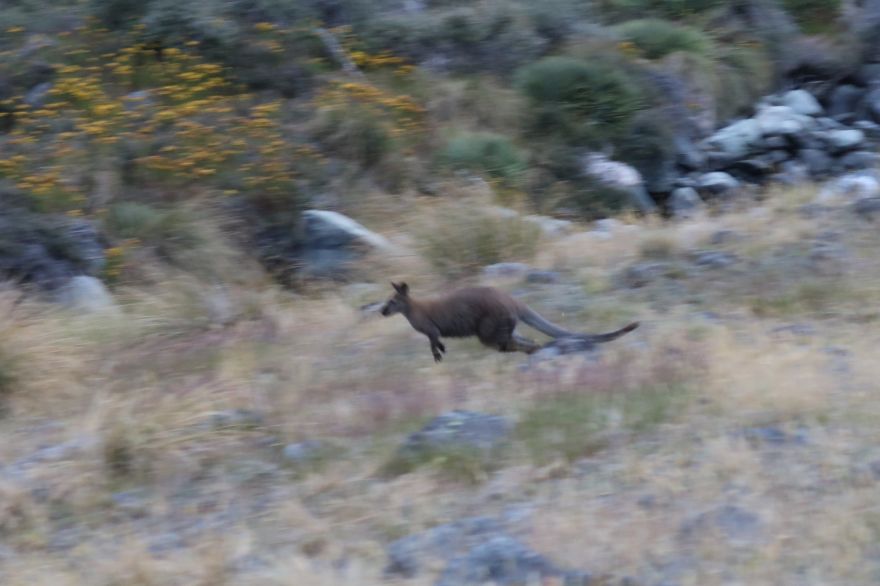 When we had filtered enough water, we continued south bound. After an hour, it started to rain. While we climbed a steep slope, light rain changed into pouring rain. On top of the hill, we had zero visibility. We couldn’t see marker poles and had to rely solely upon the GPS to navigate us through the low clouds. We crossed the road leading to the Roundhills Ski Field. From there, the grade of the track turned slightly downhill. We could make some serious speed. The more we descended, the better the visibility became. After about 2 hours, we arrived at the gravel road on the shore of Lake Tekapo. We had good hope to get a ride to Tekapa, but the few cars we saw, didn’t stop. We therefore walked the 13 kilometer long road to Tekapo. In Tekapo, we walked another 3 kilometer along the shore of Lake Tekapo to get in the center and to the holiday park. Because of Chinese New Year, Tekapo and the holiday park in particular, were extremely busy. Luckily, there was still a place available on a field for small tents. 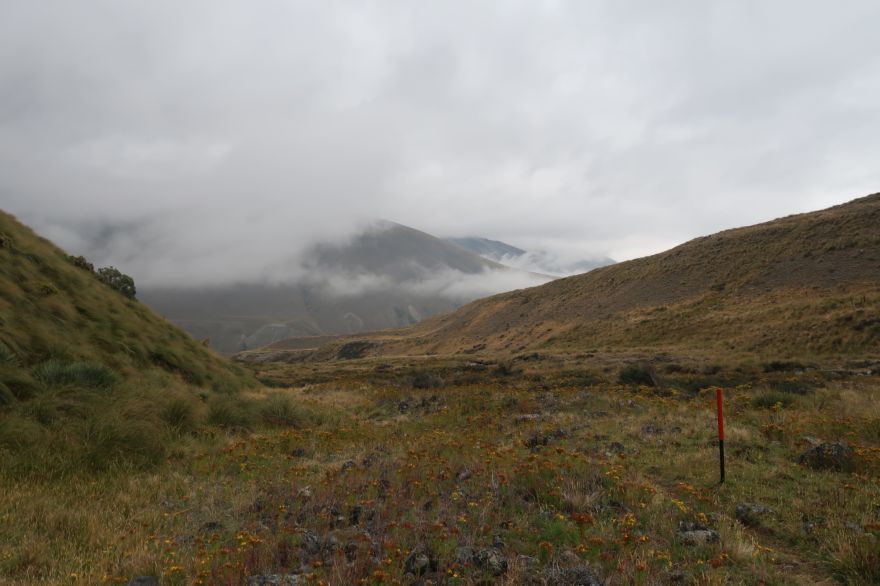