It was raining when we woke up. When everything was packed and we were ready to leave, it was dry again. We had good hope, that we would be given a ride to the start of the Tararua Ranges. However, at 7am, there was nobody that could give us a ride. We therefore walked the 5 kilometer gravel road from the Makahika Outdoor Pursuit Center to the start of the gravel road. When we arrived at the start of the Tararua Ranges, we signed the intentions book (so that everybody knows when we entered and when we are supposed to be out of the Tararua Ranges). We continued through an empty paddock before making our way up a steep graded track in the forest. However, the New Zealand forests turn out to be roller coasters, every climb is followed by a short descend. During these descends, Marjon was still suffering from her knee injury. Eventually, we arrived just after lunch time at the Waiopehu Hut (at 960 meter). 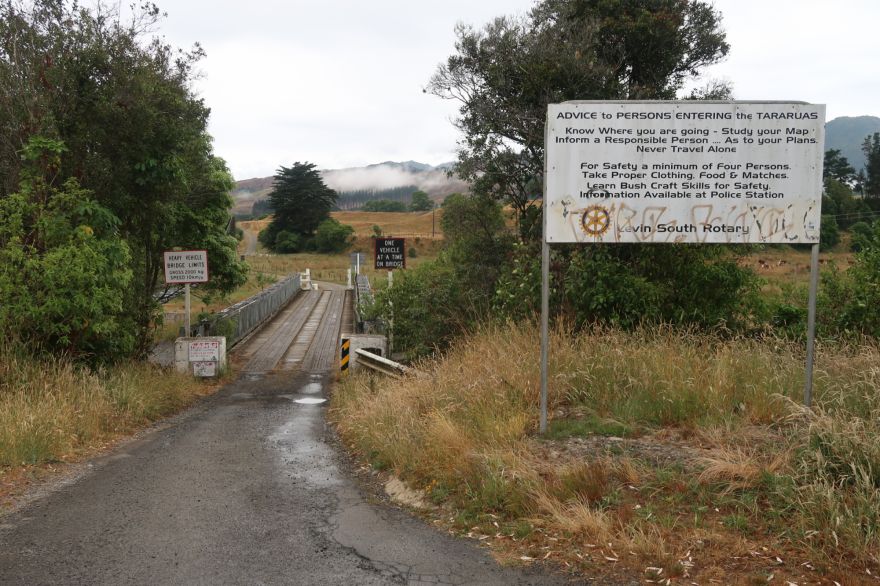 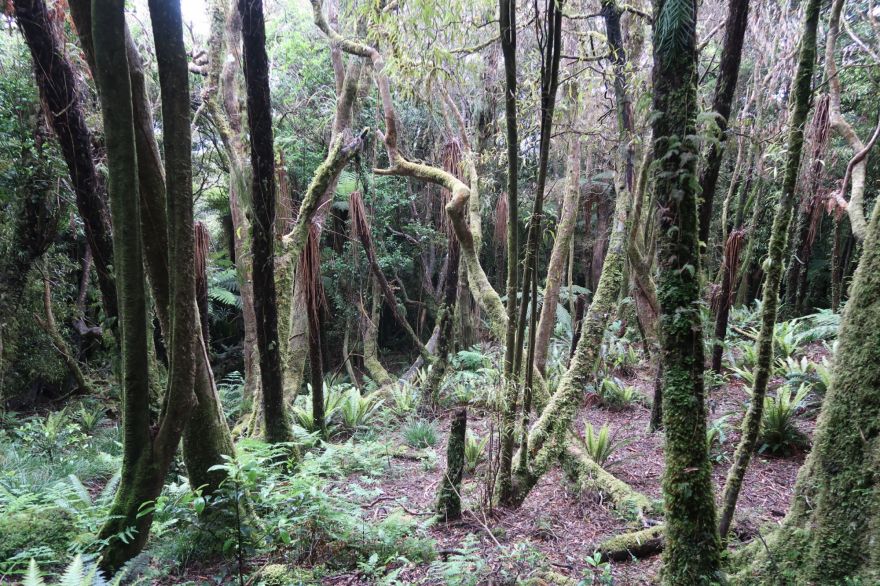 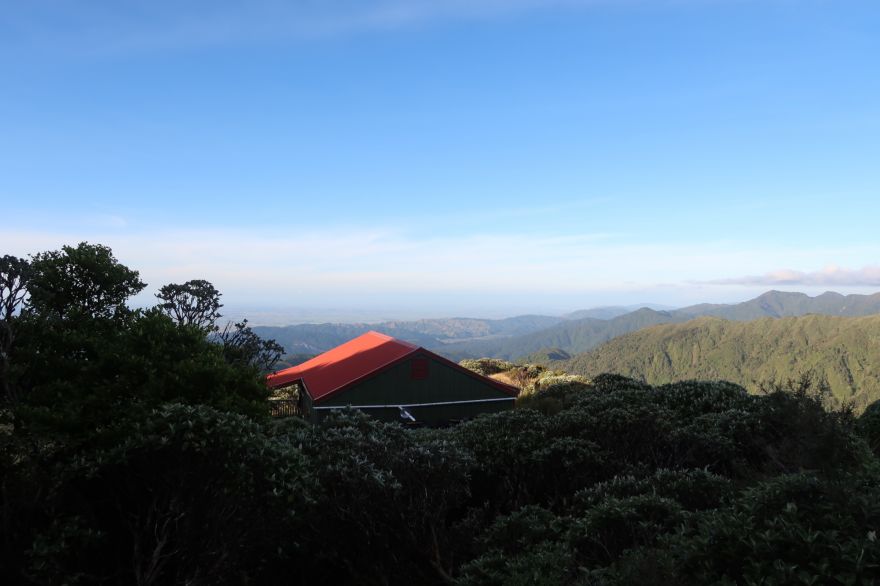 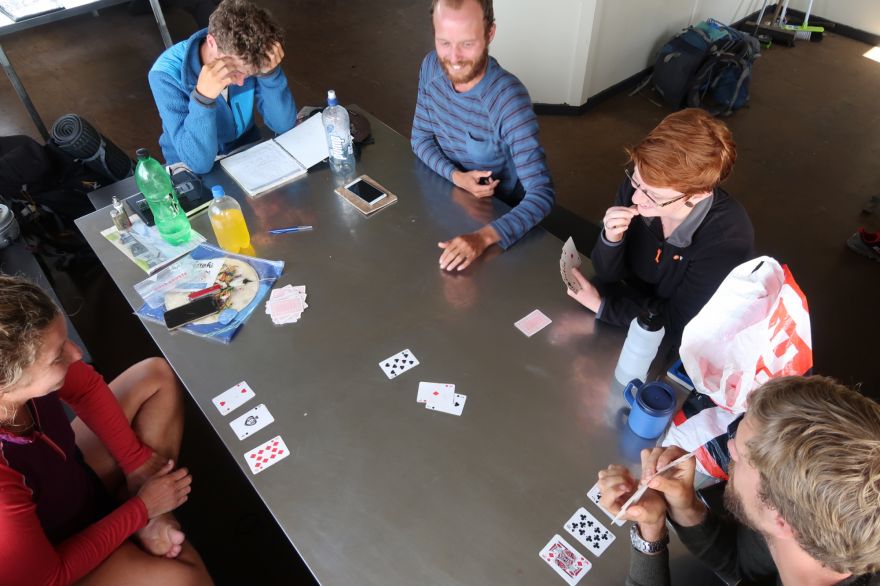 Just after we arrived at the Waiopehu Hut, Marjon had to visit the toilet. In most mountain huts, toilets are outhouses about 50 meter away from the hut. Sabine told Marjon that the toilet at the Waiopehu Hut was pretty far away. You have to walk and walk and stumble upon it, she said. After 20 minutes, Marjon had still not returned. Jasper started to get worried, but just as he asked Sabine and Tim what Marjon was taking her so long, Marjon entered the hut again. She had found a toilet, but that was locked, so she continued… and continued. She reached the top of the mountain, without seeing another toilet. Apparently, Marjon thought that the door of the toilet opened to the outside, while it actually opened to the inside. Had she given a gentle push to the door…

Well, it turned out that this was only the beginning of the toilet story. The next morning, we were about to leave the hut when Marjon decided to bring the toilet one more visit. Tim was just ahead of her and occupied the toilet. It quite some time before Tim was back in the hut. In the end, it took so much time that Marjon had a pie in the bush. When she got back in the hut and we started to put our backpacks on our backs, we heard some strange noises. Without paying much attention, we continued. But when we also heard Tim yelling (‘Hellooooo…’), we realized there was something wrong. Tim continued yelling. When Jasper suggested we should look if everything is OK with Tim, Marjon realized she had made a huge mistake. When Marjon went to the toilet, she accidentally locked Tim on the toilet. In other words: Tim had been sitting on the toilet for about 15 minutes. She rushed to free Tim. The funny part of this story is that Sabine had also heard Tim yelling, but she thought that Tim was making a joke. Poor Tim!

Luckily, we could all laugh about what had just happened. We eventually left the hut at 6:50am. We continued our climb to Waiopehu Peak (1.094 meter), Twin Peak (1.097 meter), Richards Knob (985 meter) before descending to Butchers Saddle (690 meter) and climbing back to the Te Matawai Hut (880 meter). Again, one big rollercoaster, which made it slow going for us as Marjon was still suffering from pain in her knee. After a short break at the Te Matawai Hut, we continued to Pukematawai (1.432 meter). When we reached Pukematawai, we had mixed feelings. The scenery was absolutely stunning, but when we left the Te Matawai Hut, there was a sign saying it was 4 hours to the Dracophyllum Hut. On top of Pukematawai, there was another sign, saying it was 4 hours to the Dracophyllum Hut. The one-and-a-half hour we had just walked from the Te Matawai Hut to Pukematawai just disappeared in time. Very depressing.

From Pukematawai, we followed the ridge line down and climbed back to Butchers Knob (1.158 meter). Tussock was replaced by trees. We walked in a dense forest again, where we had to climb over many fallen trees. When we arrived at the Dracophyllum Hut, we both were tired. The two person hut was already full, so we pitched our tent on the helicopter platform behind the hut. This informal campsite was one of the best we have had so far: the view from the tent was breathtaking! 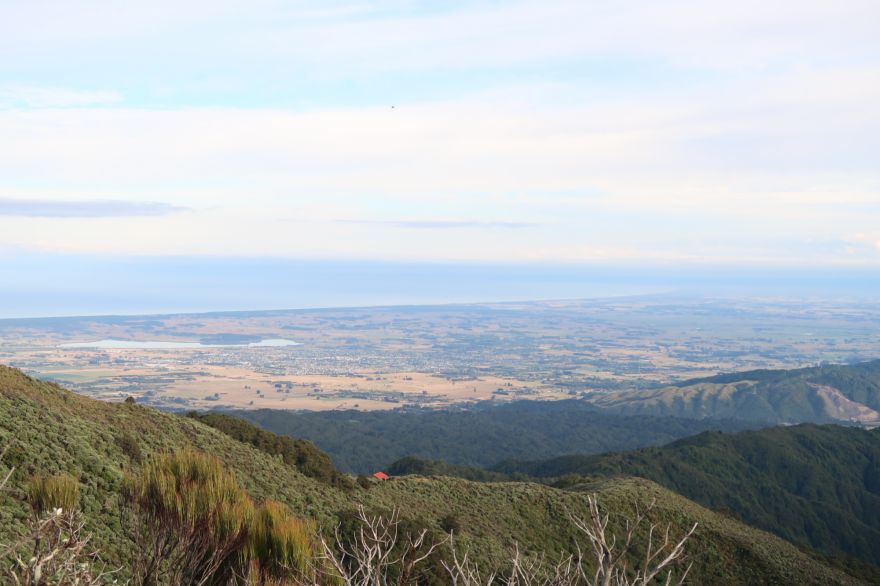 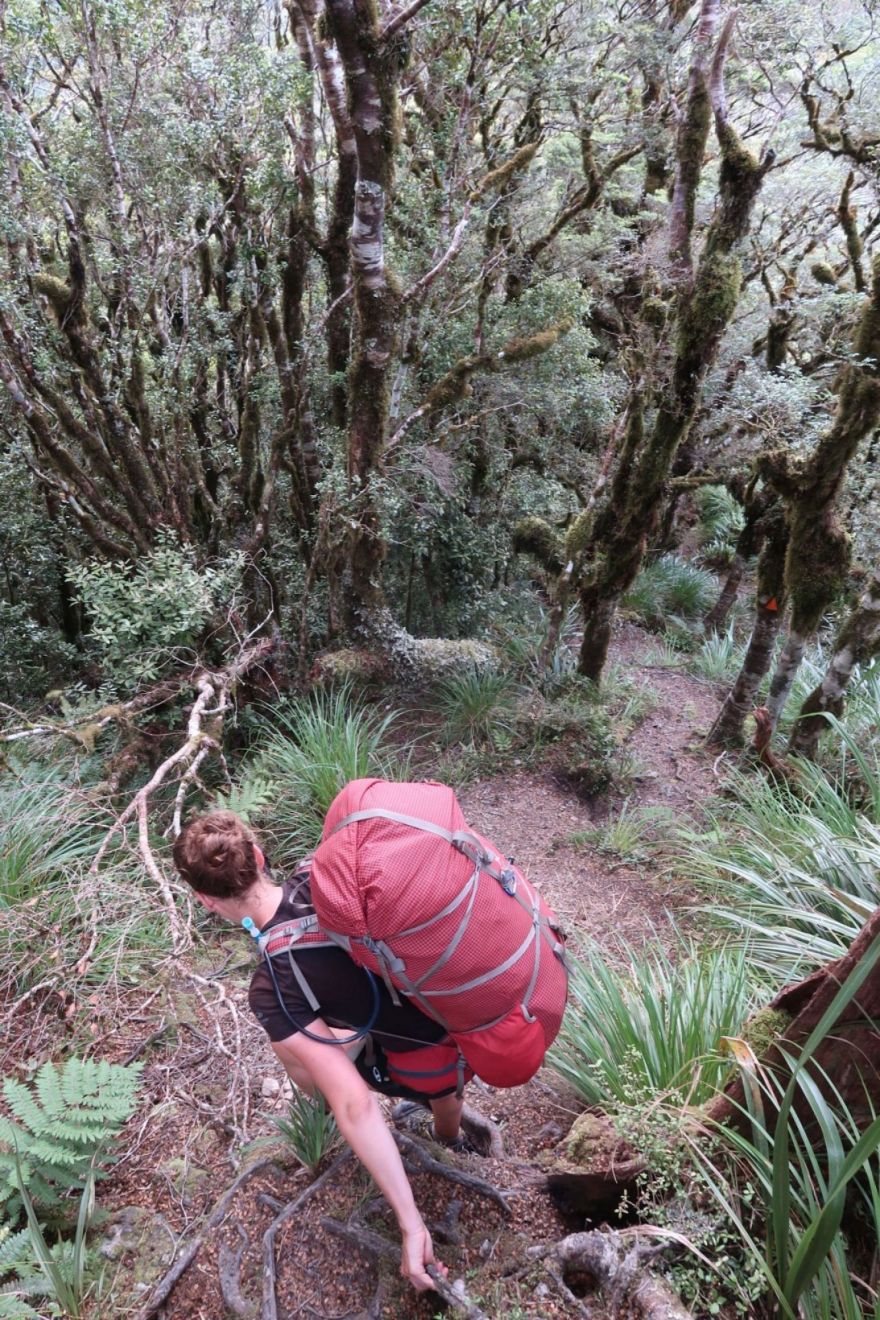 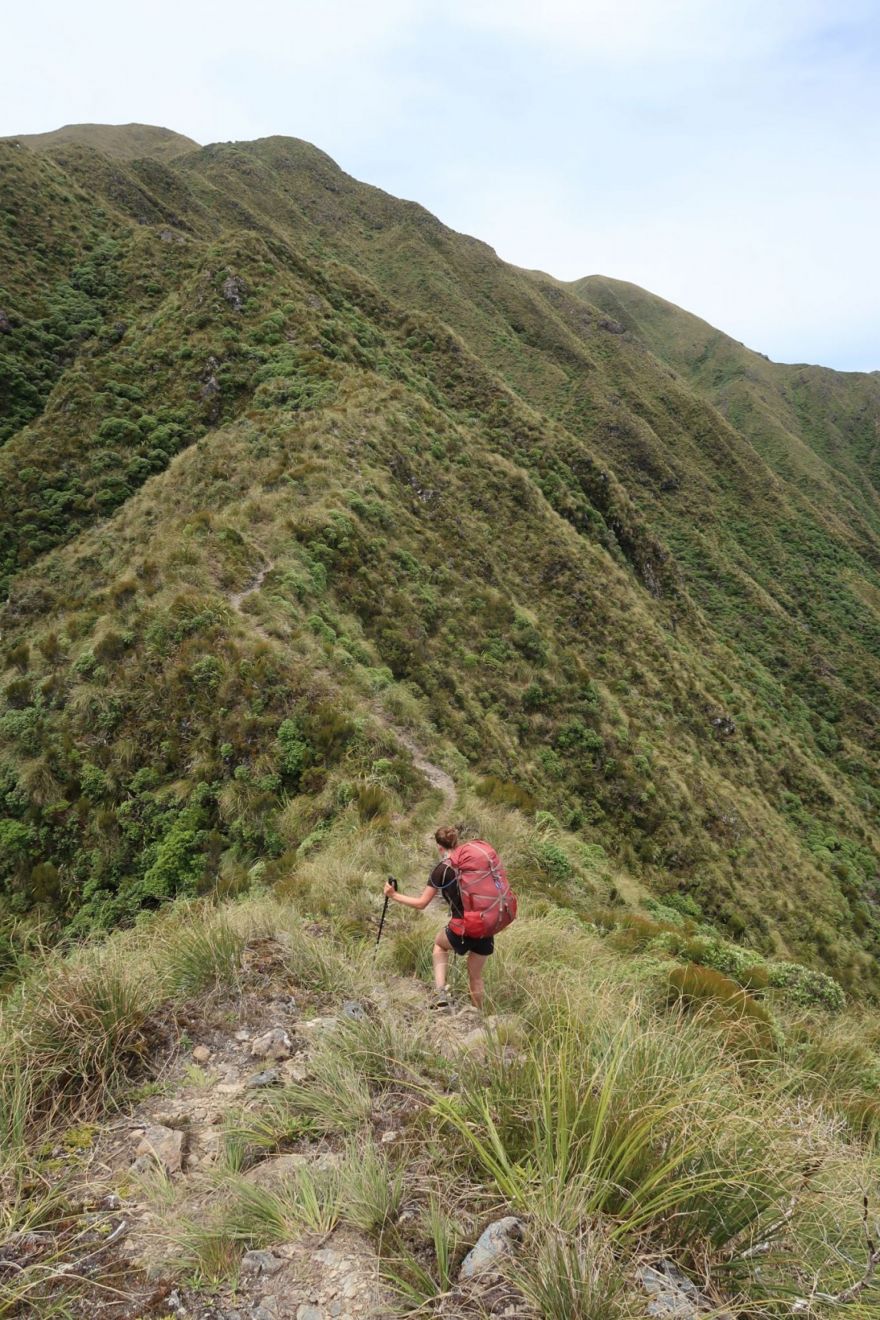 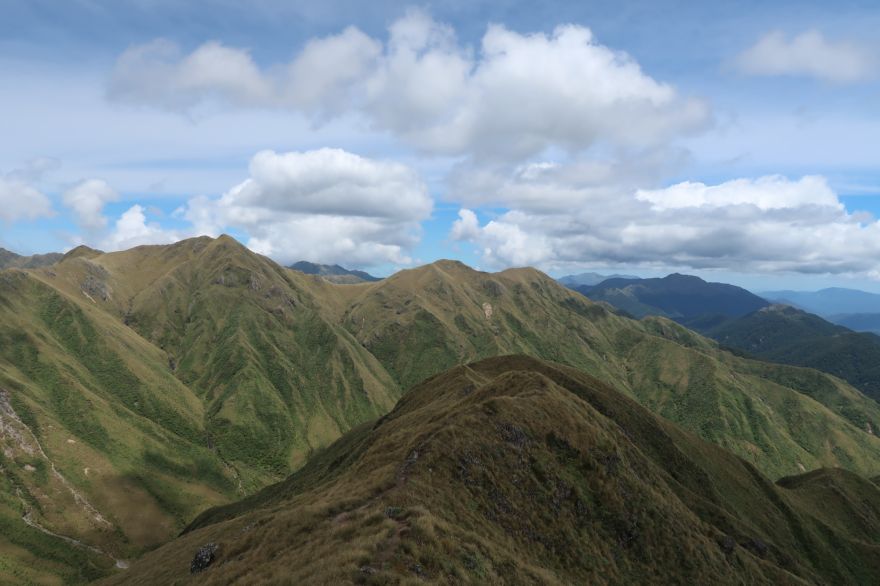 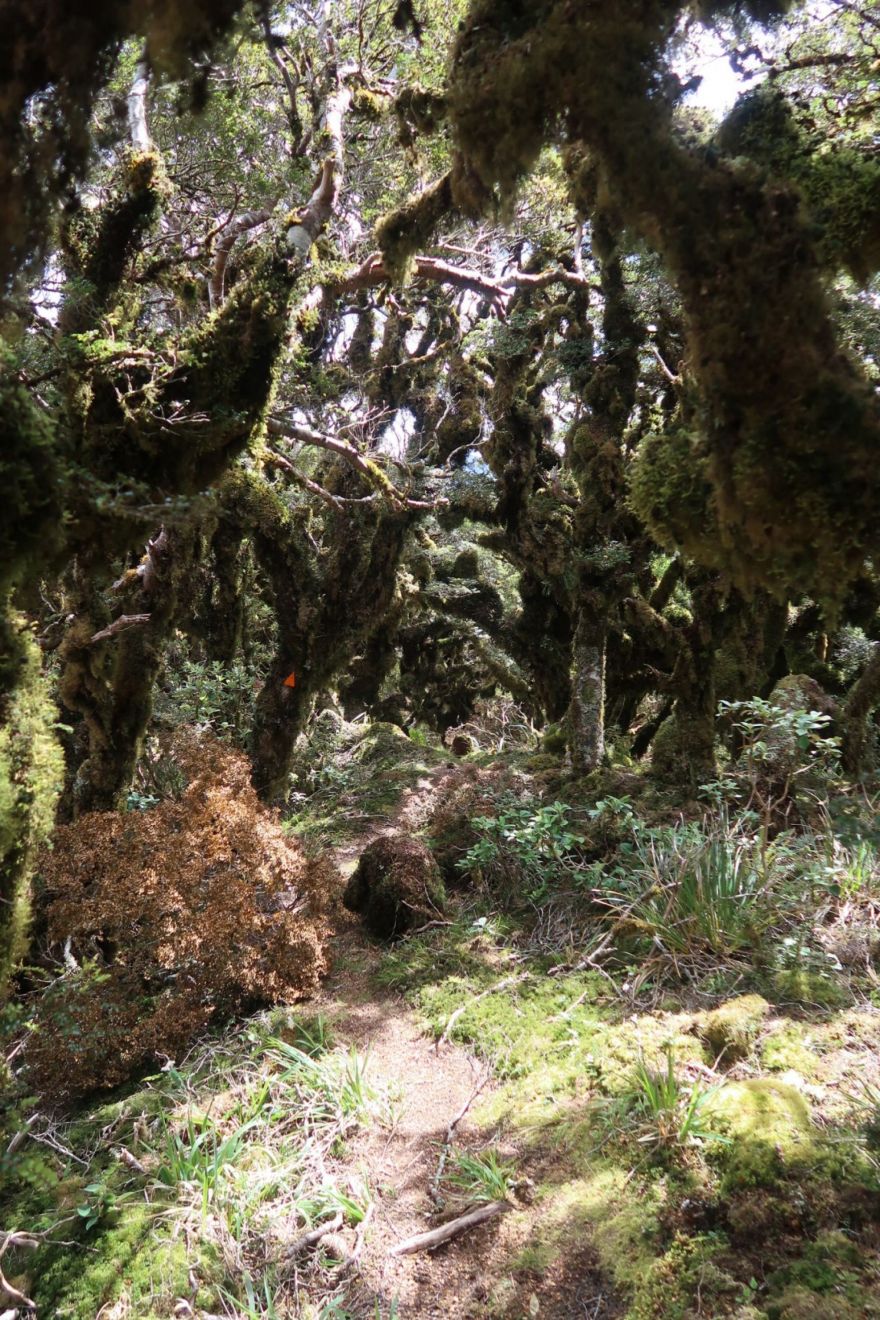 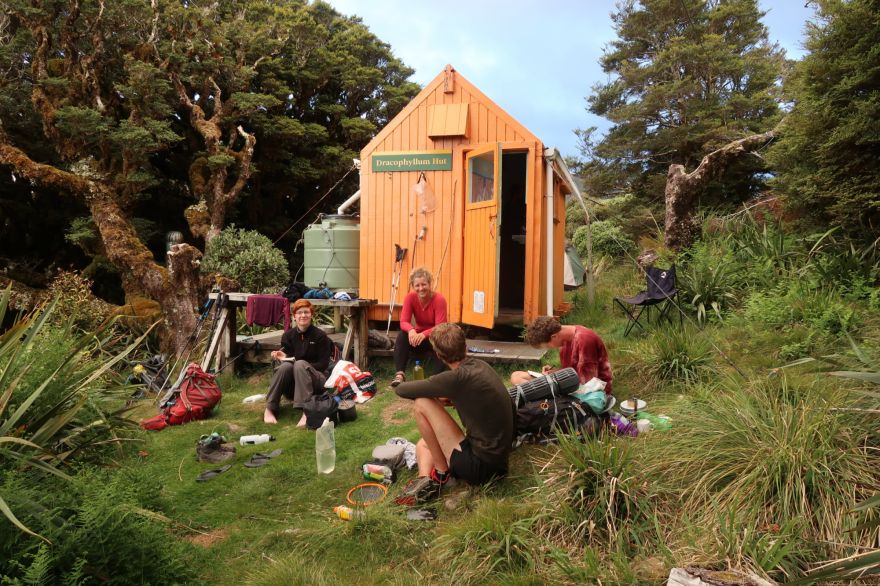 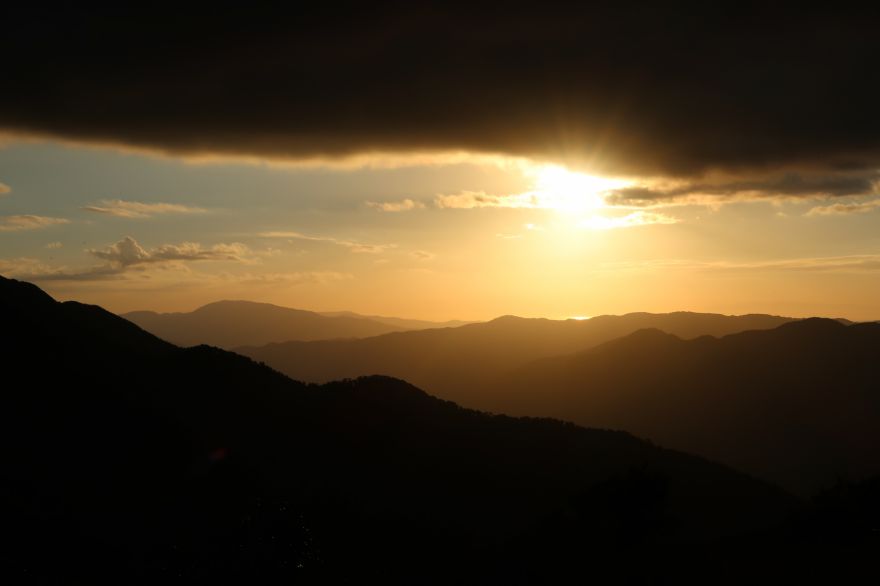 From the Dracophyllum Hut, we followed the route through the forest, climbing above the tree line and walking through tussock again. We climbed to Puketoro (1.152 meter), Shoulder of Kelleher (1.142 meter), Nichols (1.242 meter). Every climb was followed by a steep descend, making it slow going. Just before we arrived at Nichols Hut, it started to rain. We even had to put our rain gear on. We made our way to Nichols Hut. Although it was only 11am when we arrived there, we decided to have a lunch break. Because of the rain we were not really tempted to continue anyway.

After about an hour, it was still raining and we decided we just had to continue. We climbed back to the trail and continued our way to Mount Crawford. Quickly after leaving the hut, it stopped raining. However, we were still walking in the clouds when we arrived at Mount Crawford (1.462 meter). Without any visibility, we immediately continued. The descend was long. No, it was never ending. We continuously had to take huge steps: climbing down tree roots was quite common. If Jaspers’ knees were hurting when we finally arrived at the Waitewaewae Hut (310 meter). 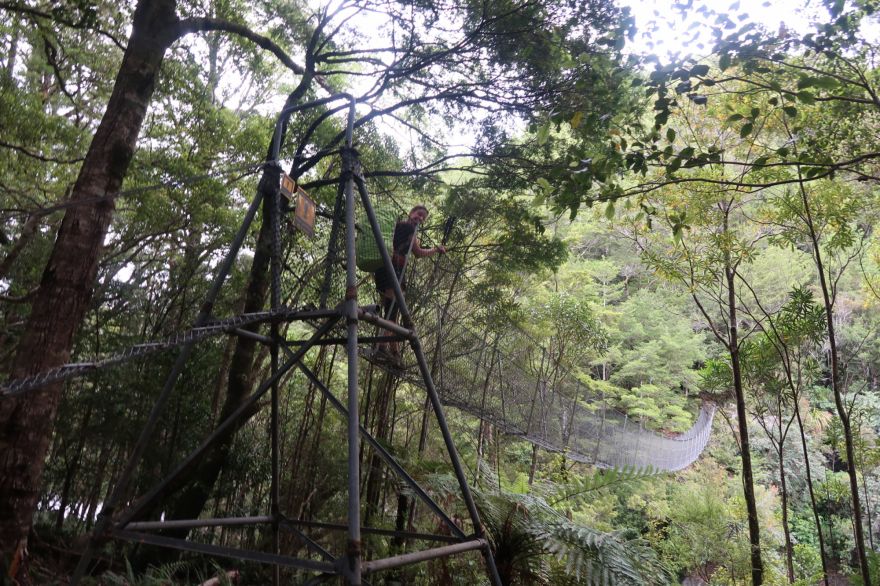 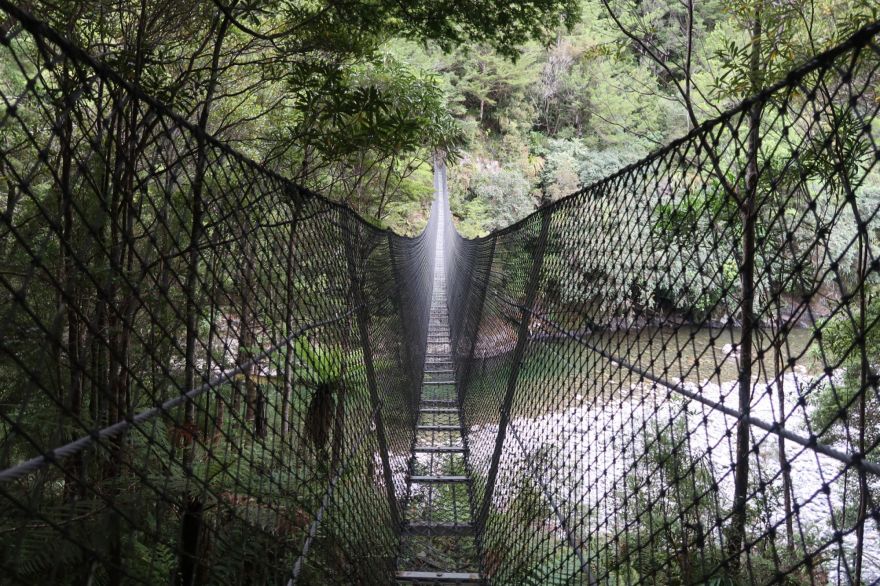 We planned to spend Christmas Day in one of the huts in the Tararua Ranges. However, when we discussed this with other hikers, it turned out that most of them didn’t bring enough food to take a rest day in a hut. Because we didn’t want to stay on ourselves in a hut, we eventually also continued. The trail followed the Otaki River for a while before heading back into the forest. Because of a major land slip, there was a diversion we had to follow. With more kilometers and a longer ascend, this diversion took more time than expected.

Because Marjon her knee was still hurting, Tim and Sabine had moved ahead. They waited for us during lunchtime. It turned out we took a break just meters from each other. After lunch, the track eased out and followed a formed tramline. After crossing one more suspension bridge, we arrive at the Parawai Lodge. Don’t get mistaken by this name, as it is a grumpy old hut.

When we had just finished our dinner, a couple entered the hut. The man had a long white beard and looked quite like Santa Clause. They told us that they lived in the area and just wanted to say hi. When Sabine asked if they had brought a Christmas Cake, the lady pulled out a box filled with homemade muffins. They also brought soda drinks, tomatoes and plums. It turned out to be a real Christmas evening, with Christmas carols and great stories. 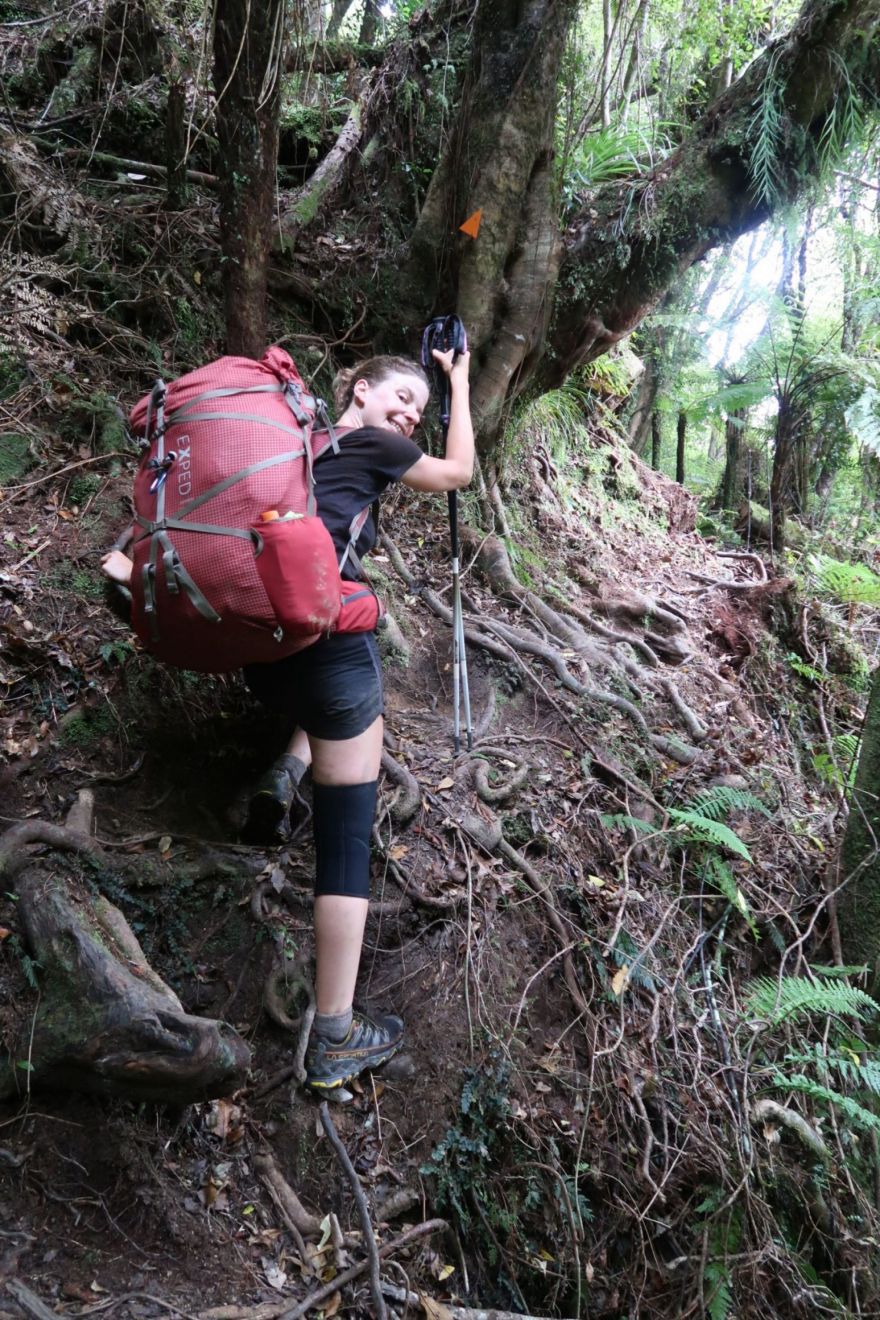 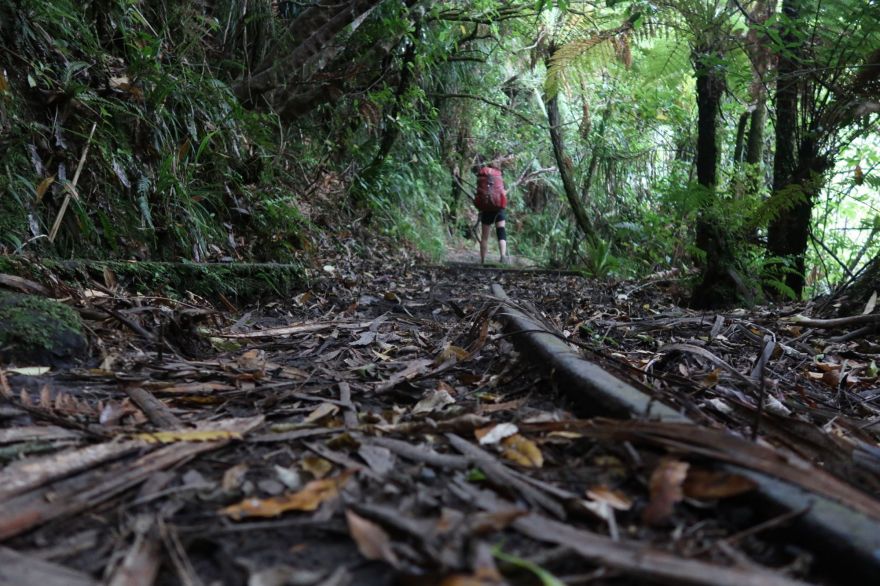 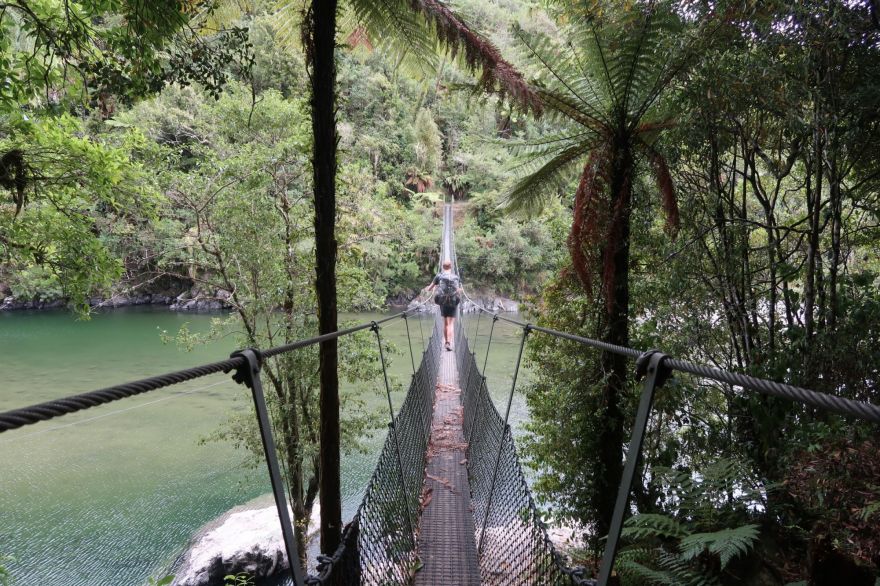 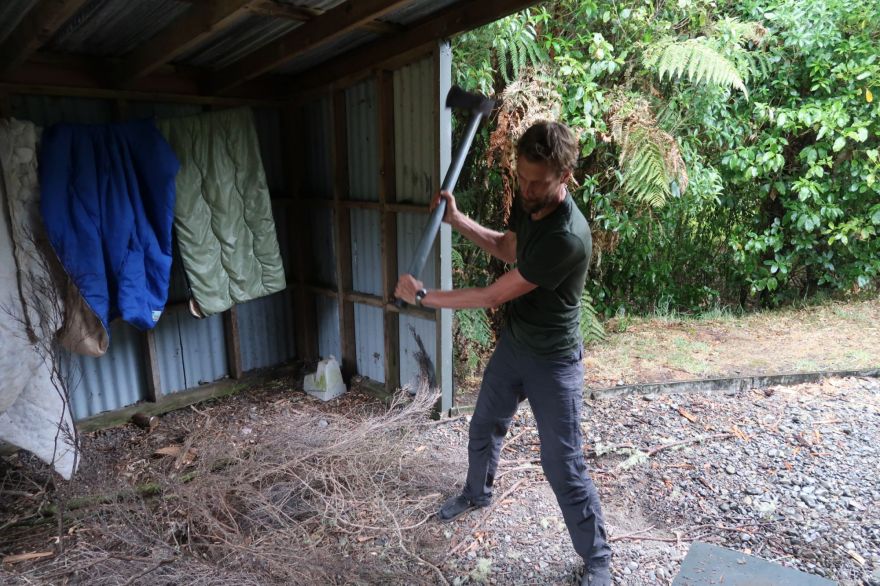 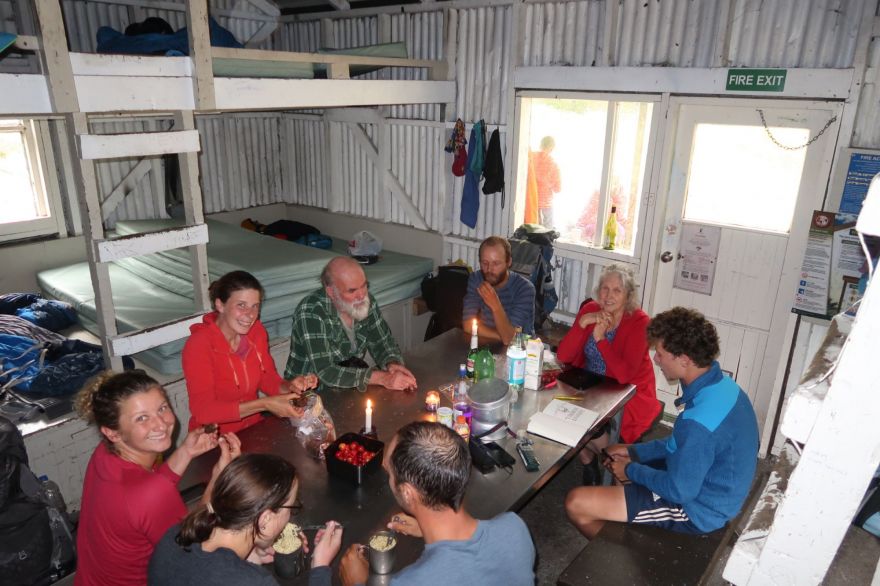 It rained during the night. No, it stormed during the night. We were laying close to a ventilation roster, and we felt the rain blowing through the ventilation roster. When our alarm went off, it was still raining and nobody was eager to get out of bed. When the rain eventually started to ease, we got out and packed our stuff. We left the hut in our rain gear. However, because of the high humidity, we quickly took off our rain gear. We followed the track up the 812 meter high Pukeatua. Because of the rain, tree roots were very slippery. Marjon found this out the hard way. When she slipped on a tree root, she fell with her face forward. She hit a tree root with her cheekbone. Luckily, she only suffered minor injuries, but this could have ended differently. Soon after, we arrived at the top of Pukeatua. Although still early, we had lunch on top of the mountain.

The descend was pretty easy. After about 2 hours, we left the forest and continued our way down a gravel road. After about 5 kilometer, we saw a car approaching us. With Marjon her knee still hurting, we thought why not try to catch a ride. And that succeeded. A young couple stopped and offered to bring us to the campsite in Waikanae. What a service! 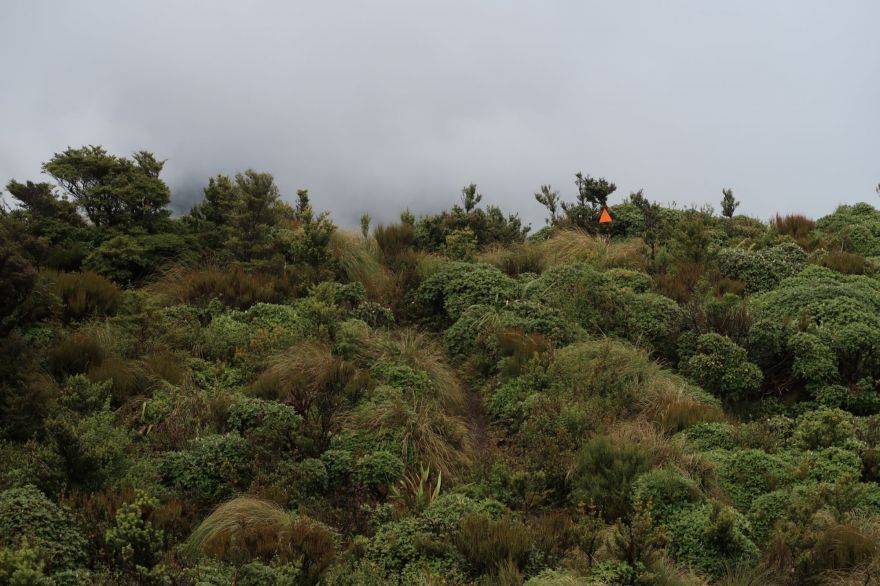