During our unplanned stay in Nelson, we had a morning coffee with Ben and Natalie, to fellow Te Araroa hikers. They were also unable to enter the Richmond Ranges. We discussed our options and also brought a visit to the local DOC office to ask their opinion about the weather and the Richmond Ranges. However, this visit was not really helpful. Subsequently, Natalie came up with the idea to search the ring. Which ring, we asked unknowingly. Apparently, the ring that has been used in the Lord of Rings movies has been made in Nelson. We walked to the jewelry and asked for the ring. What we got, was a massive ring. Something completely different from what I expected. We were not really sure what we were looking at, but for fans of Lord of the Rings, this seems to be a nice activity. 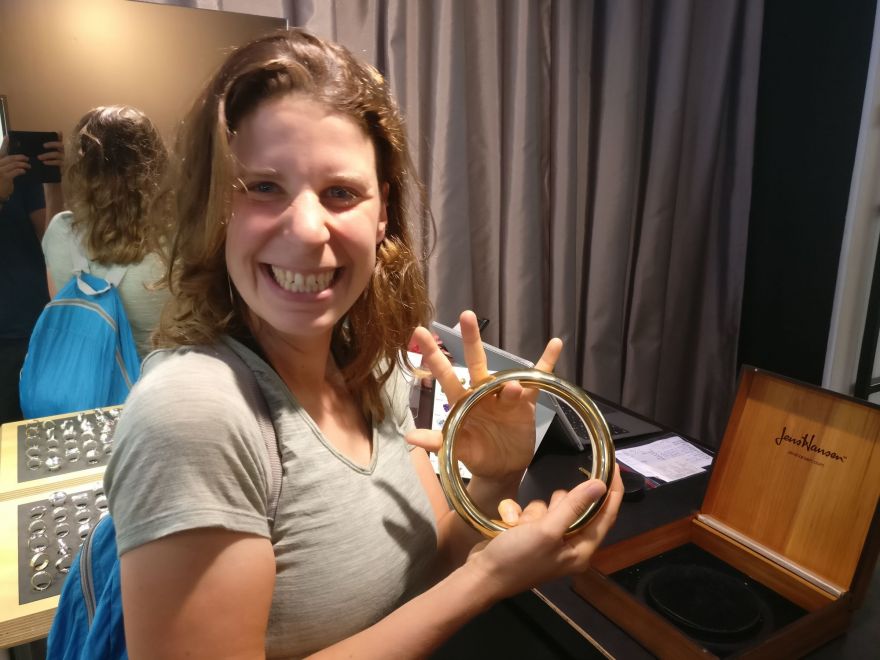 Later in the day, we walked to the Centre of New Zealand. A hill just outside the center of Nelson. From the top of this we had an amazing view over Nelson. After making our way back into Nelson, we had dinner at Stefano’s. One of the few good pizza’s we have had in New Zealand so far. 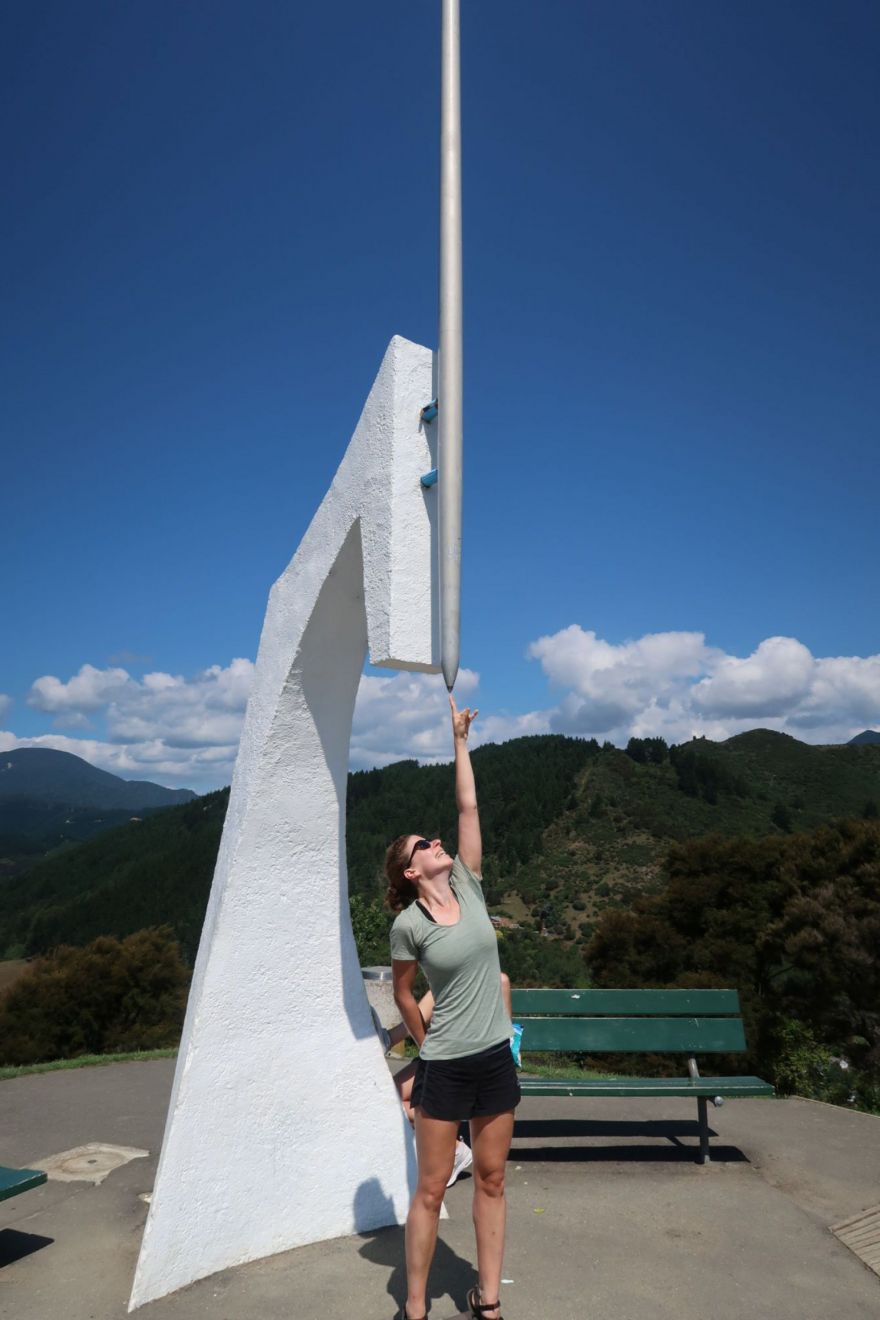 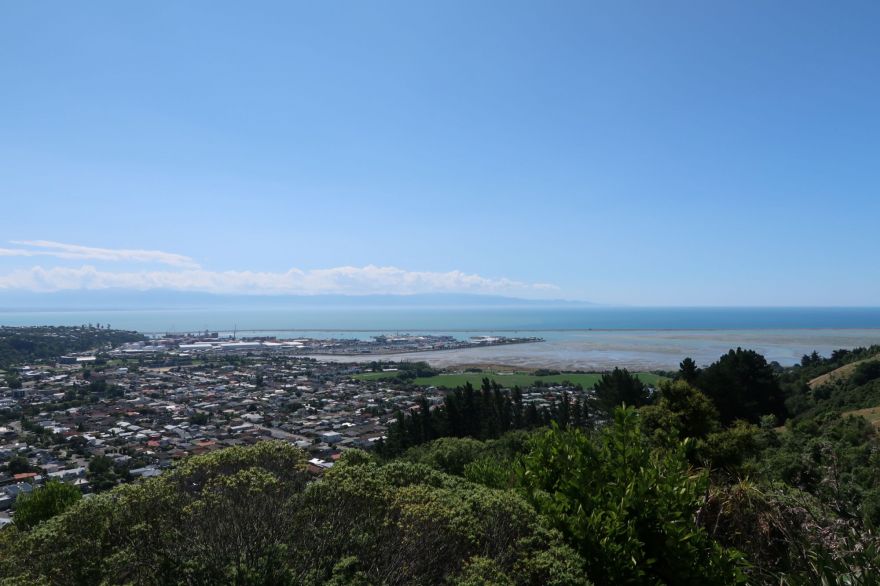 Tuesday morning, we booked a shuttle from Nelson to St. Arnaud. When we arrived at the i-SITE, we saw another couple we have seen on the trail before. They had also booked a shuttle. Different company, same time. When their shuttle arrived, we were also on the list. Not sure how this works, but we got in. One-and-a-half hour later, we arrived in St. Arnaud. We walked to Lake Rotoiti, where we took some photo’s at the jetty. At the visitor information center, we asked for information about the current status of the rivers. The lady told us that she didn’t know of any current hazards on the trail and explained that all major rivers are bridged. Subsequently, we headed back into the center of St. Arnaud. We were told by fellow Te Araroa hikers that the burgers at the service station are really good, so we just had to try these ourselves. One hour later we can conclude that the burger is indeed pretty good! 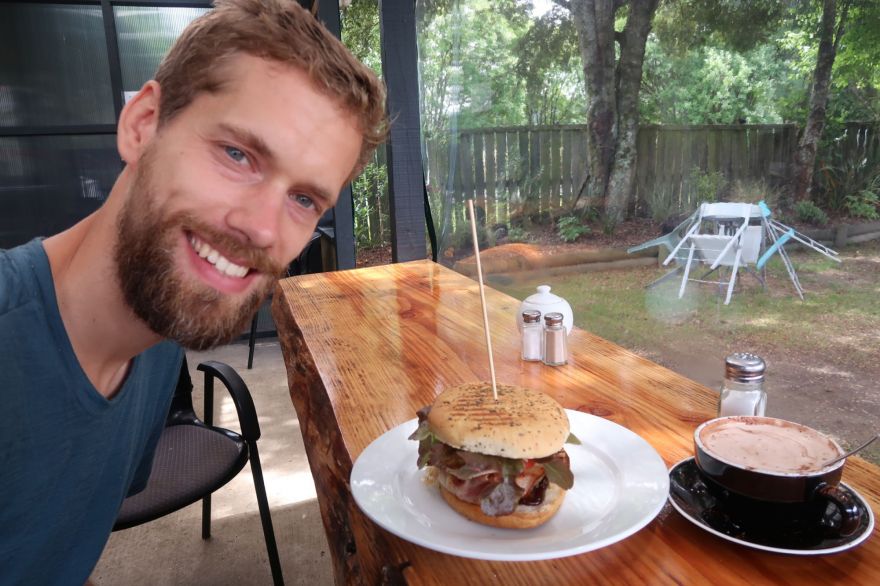 After lunch, we checked in to the Alpine Lodge. We also received our food parcel (yeah, this one has also arrived!). Because we didn’t fancy our own food, we went out for dinner in the restaurant of the Alpine Lodge. The food was not too expensive, and of good quality. Just what a hikers needs!

There was a weather alert in place for the west coast of New Zealand. According to the weather forecast, a lot of rain was predicted. In St. Arnaud, it would start raining around lunch time. Our aim was to make as much ground before the rain would set in. We therefore left the Alpine Lodge at 7am. We walked along the shore of Lake Rotoiti and after two hours, arrived at Lakehead Hut. After a short break, we continued into a wide open valley. We walked through high grass and several dry riverbeds. When we crossed the Traverse River via a suspension bridge, it started to rain. We followed the river upstream. We arrived at a major wash-out. A signed mentioned a diversion, but we couldn’t find it. We did see footprints leading through the unstable wash-out, so we carefully followed these footprints and made it safely across. At a second wash-out, we literally had to hold ourselves on tree roots to safely get across the wash-out. Around 2pm, we arrived at John Tait Hut. When we stepped into the hut, the light rain turned into heavy rain. Although we planned to continue, we decided to call it a day. 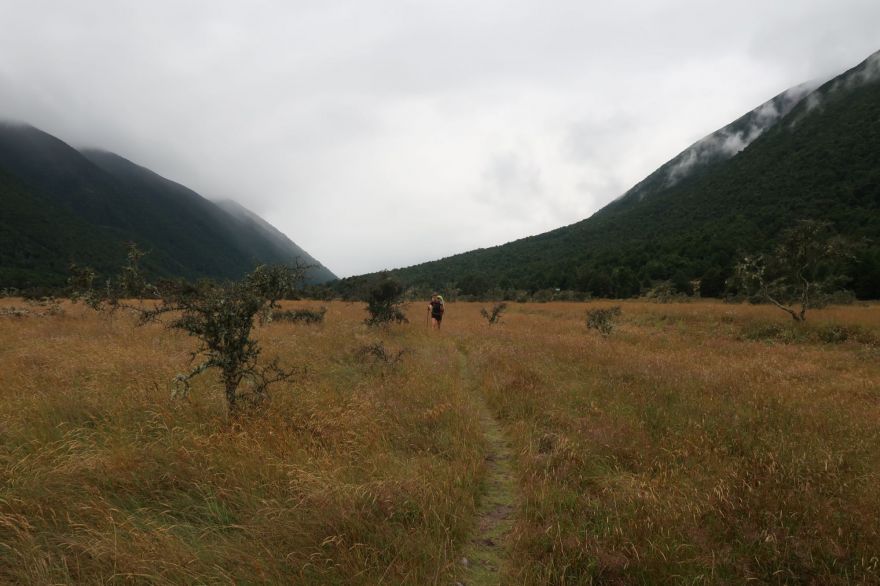 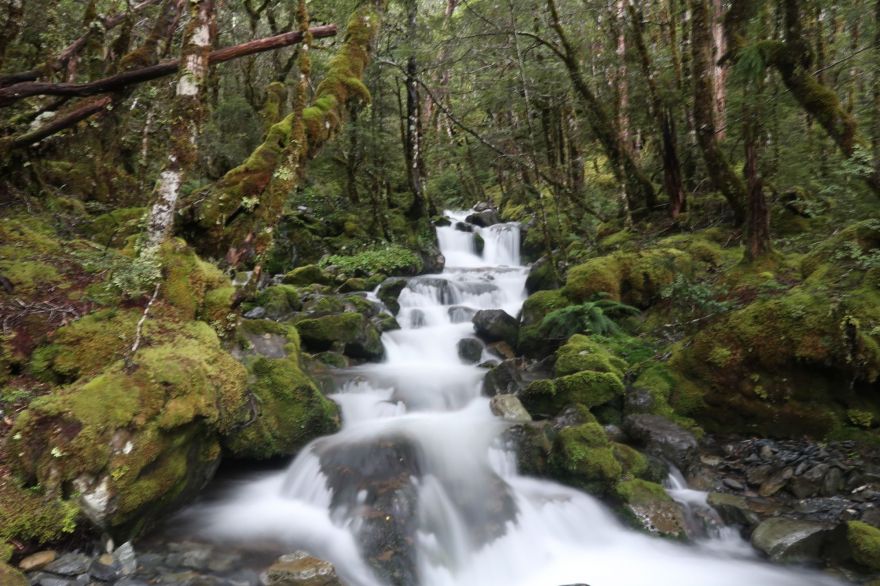 After sleeping in, we left the hut at 9:10am. We continued following the Traverse River upstream. At some points, the river made such a noise, that we could barely talk to each other. Because of the rain of last night, the track had turned into a river itself and we had to wade through 10 centimeters of water.

After about an hour, we arrived at a junction towards the Traverse Falls. We descended a steep track and saw a massive waterfall. Back on the trail, we climbed further and further. We had to climb over and around a few massive rocks laying on the track. Soon after, we had eyes on the Upper Traverse Hut. However, the track towards the hut proved to be a challenge in itself as it was covered by high grass and was completely flooded. When we arrived at the Upper Traverse Hut, we hesitated: shall we make a long day today, or tomorrow. We were enjoying the scenery so much, that we decided to stay in the hut. 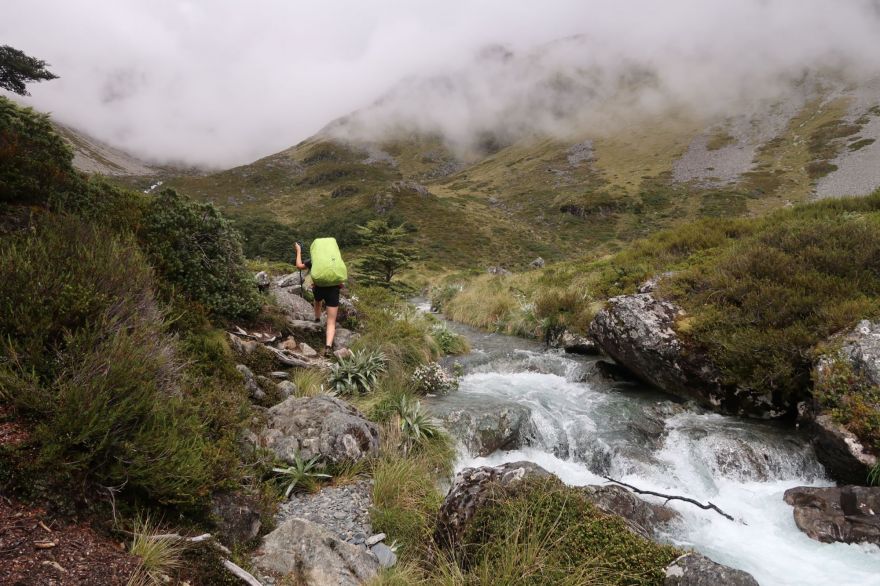 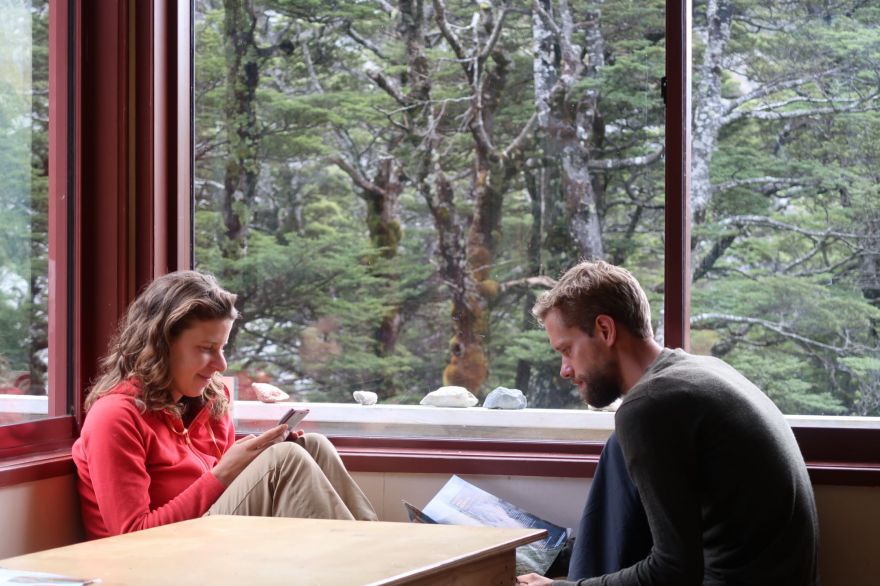 From the Upper Traverse Hut, we continued to the West Sabine Hut. With a distance of only 8 kilometer not a big deal. However, in this 8 kilometer we also had to climb to the Traverse Saddle. We left the Upper Traverse Hut (1.334 meter) early in the morning. The first meters, we walked through high grass. Our feet got wet and cold instantly. After about 20 minutes, we arrived at the start of the climb to Traverse Saddle. We followed marker poles through a large boulder field. The track was steep, but not really difficult. After a climb of about 100 meter, the grade became more easy again. We followed the track to Traverse Saddle (1.787 meter). We were rewarded with an amazing view. High mountains were all around us.

We enjoyed the scenery for about 30 minutes before starting our descend. We crossed another boulder field. Marjon fell and landed upside down between large boulders. As she got completely stuck in between the boulders, Jasper had to help to get Marjon out of her uncomfortable position. When Marjon was standing on her feet again, we continued along a steep and sometimes slippery descend. Once we arrived at the river, we followed the river downstream. We crossed a deep and impressive canyon before arriving at the West Sabine Hut (687 meter).

After lunch, we continued along the Sabine River West Brach. We crossed several avalanche paths, where stopping was not allowed. We followed the track until Blue Lake Hut (1.199 meter). We walked over to Blue Lake (about 100 meter from the hut), which is one of the most (if not the most) clear lake in the world. Blue Lake has a visibility of 70 to 80 meter, which makes it comparable to tap water. There are only some tropical waters that have a comparable clarity, but there are no known fresh water lakes that come even close. 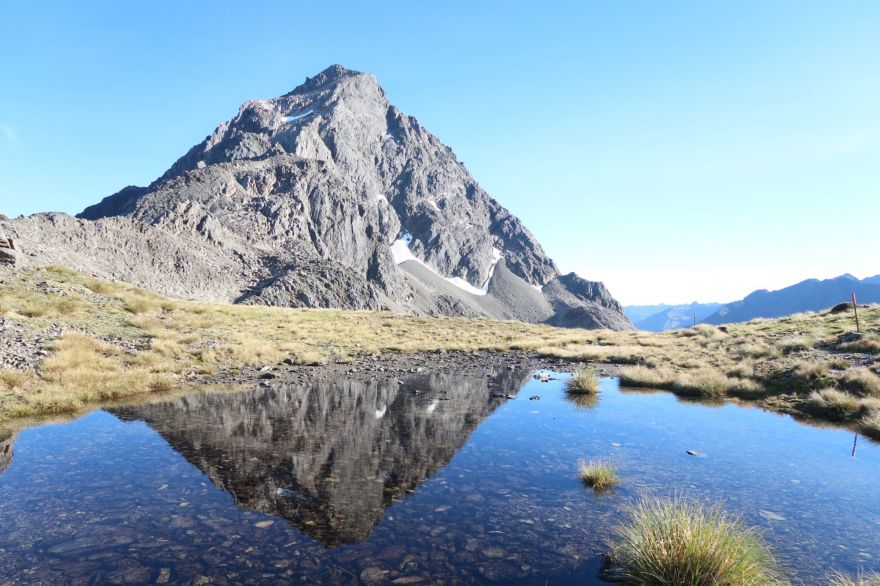 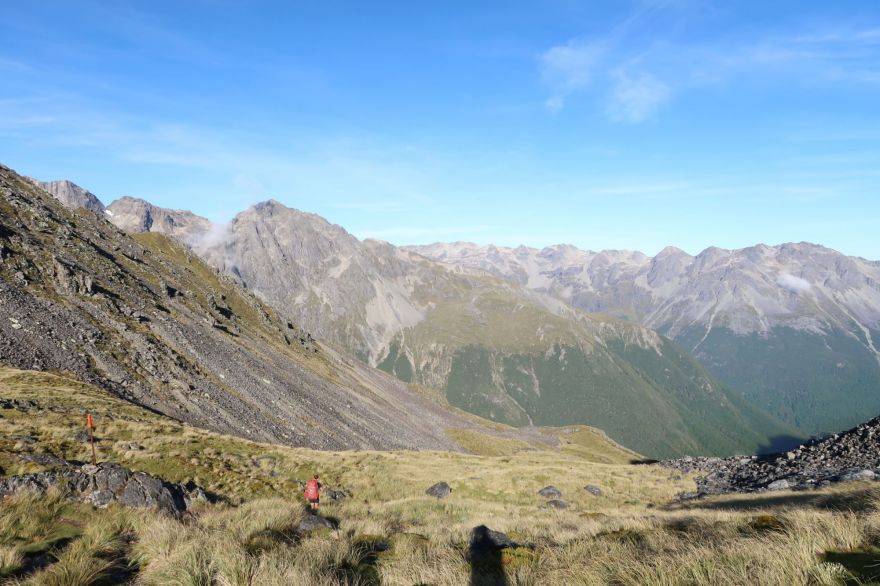 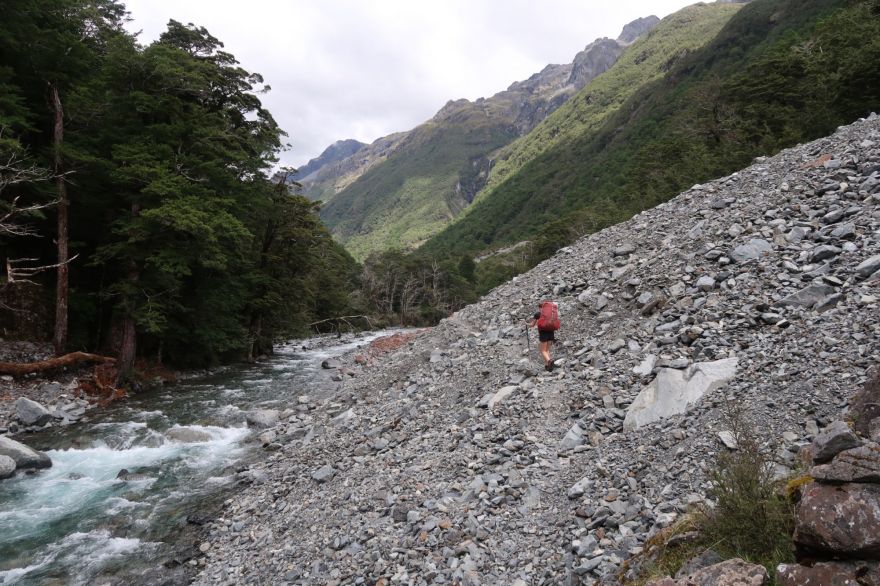 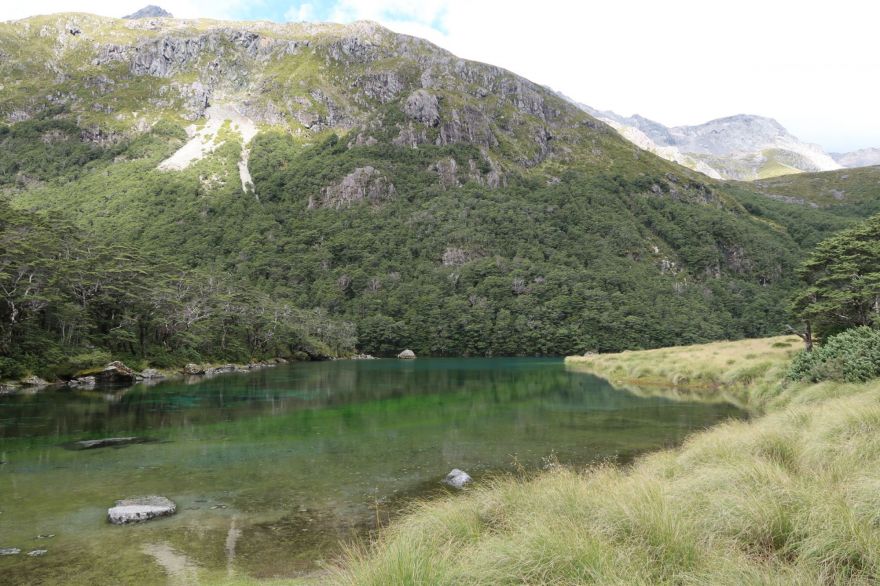 On Saturday, we planned to walk from Blue Lake Hut to the Waiau Pass (1.870 meter). We left Blue Lake Hut and followed the track up towards Lake Constance. Where the track crossed a large scree slope, we lost the marker poles. We saw a track crossing the scree slope. We therefore crossed it, but arrived at a dead end. We retraced our steps and finally found another marker pole high above us on the scree slope. We climbed back to the route and crossed the scree slope one more time. Back on the route, we walked high above Lake Constance, before descending along an insanely steep track. We arrived at the far end of Lake Constance. With the clear water of Lake Constance, high mountains and several waterfalls, this was a breathtaking location. We realized that this could be a ‘once in a lifetime’ opportunity to camp here. Even though we had only walked 3 kilometer, the decision was quickly taken: we decided to camp on the shore of Lake Constance.

In the afternoon, we took a shower under a massive multi-story high waterfall. Although painful for head and shoulders, it was amazingly refreshing. And cold. However, as soon as we stepped out of the water, the sun soon made us forget the cold of the water. We had an early dinner so that we could go to bed early. Reason for that was that we set our alarm at 10pm as Jasper wanted to take some star photography. 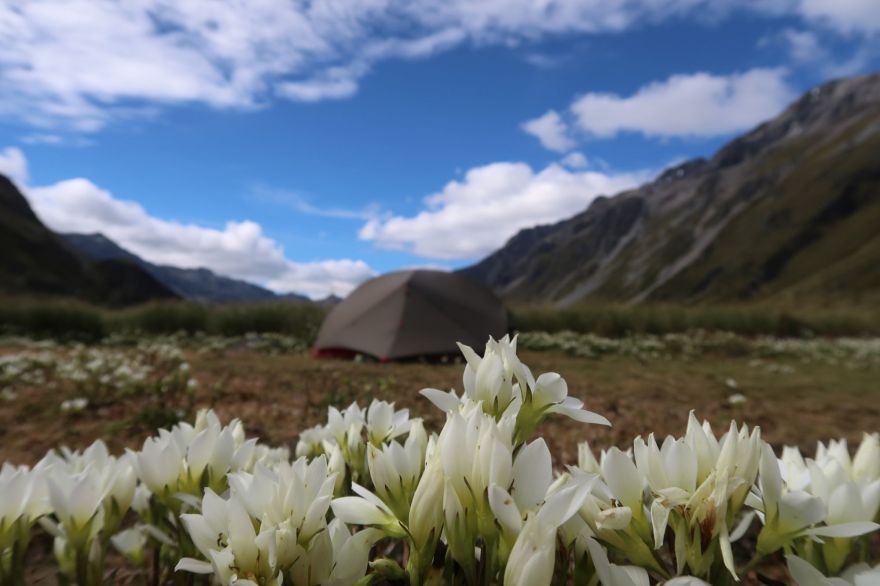 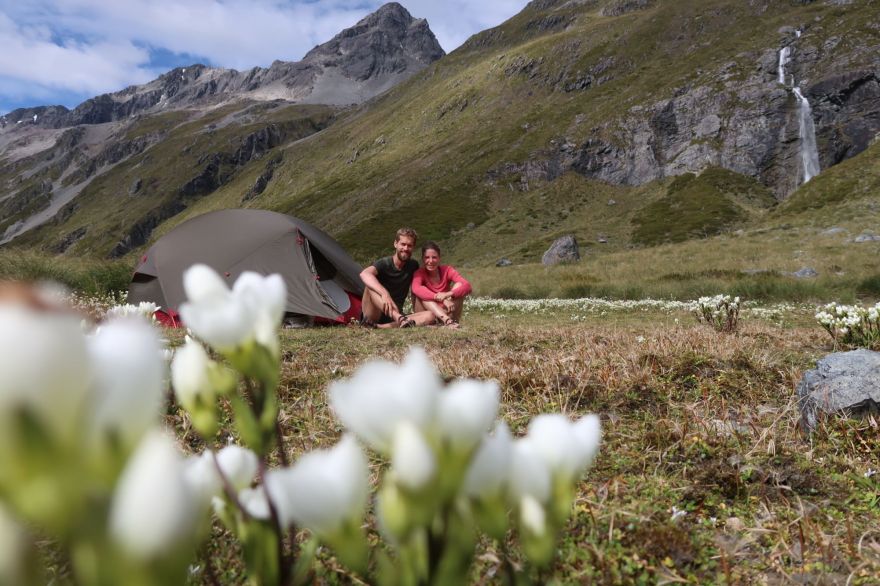 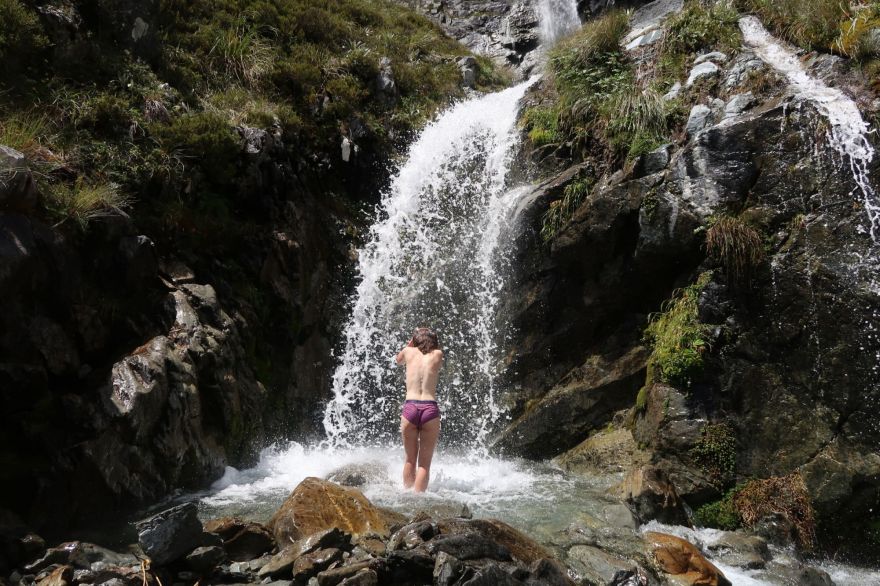 Our alarm went of at the 4am. We packed our tent and left while it was still dark. With our head light, we were able to find the track. After about 20 minutes, we arrived at the climb to Waiau Pass. The track went straight up a steep scree slope. Exhausted, we arrived after 45 minutes at the top of the scree slope. After a short near flat section, a second scree slope followed. Again 45 minutes later, we arrived at the top of Waiau Pass (1.870 meter). We were minutes late to see the sunrise above the mountains. However, the view was still pretty spectacular.

After spending way too much time at the top, we started our descend. We knew that that were some rocky section ahead. However, we didn’t expect the descend to be so extreme. The descend looked more like we were rock climbing than we were hiking. Once we left the rocks behind, we followed a river downstream. We had to be careful, not to step into a covered hole that would catapult us into the river. We successfully made it to the unofficial campsite at Waiau Forks. After enjoying our lunch in the shade of some trees, we crossed the river and walked over various long and tiring boulder fields and scree slopes. Finally, the track entered a widening valley floor. After about 3 hours, we arrived at the Waiau Hut (871 meter). 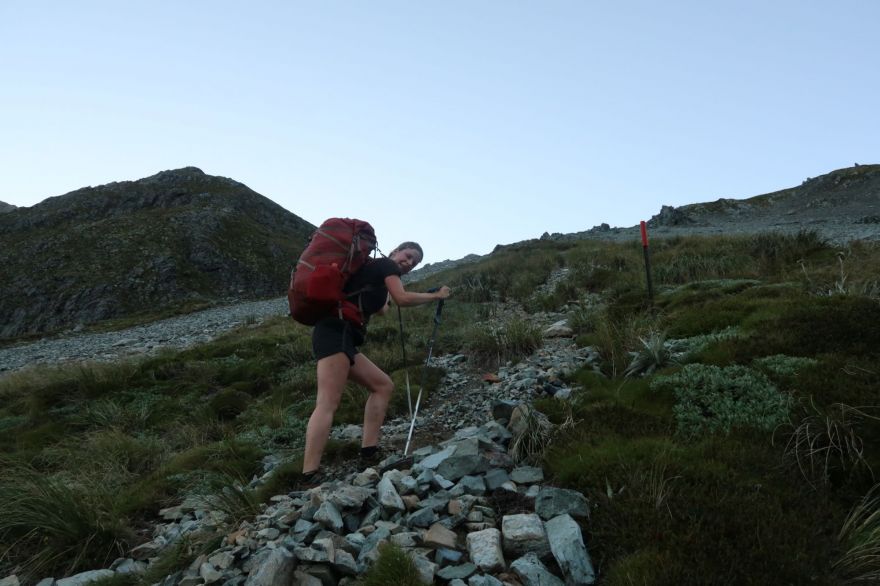 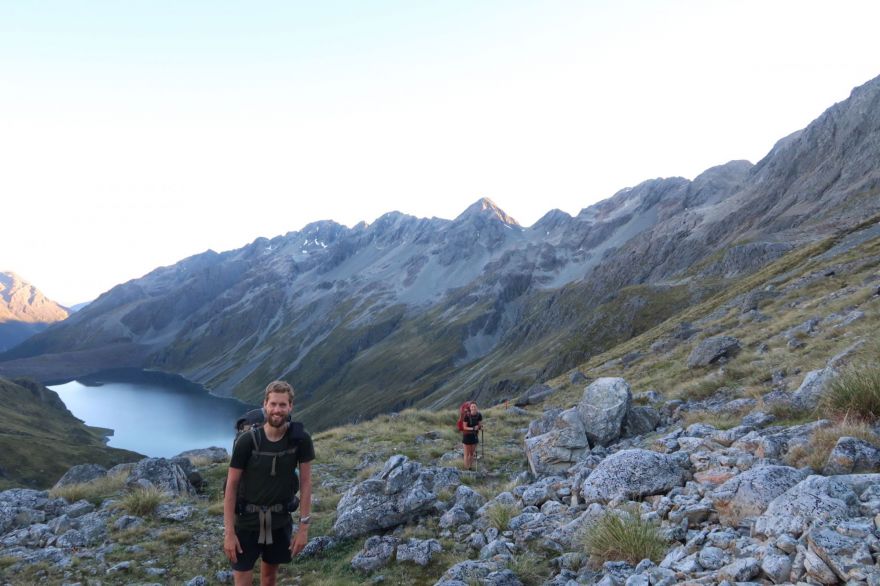 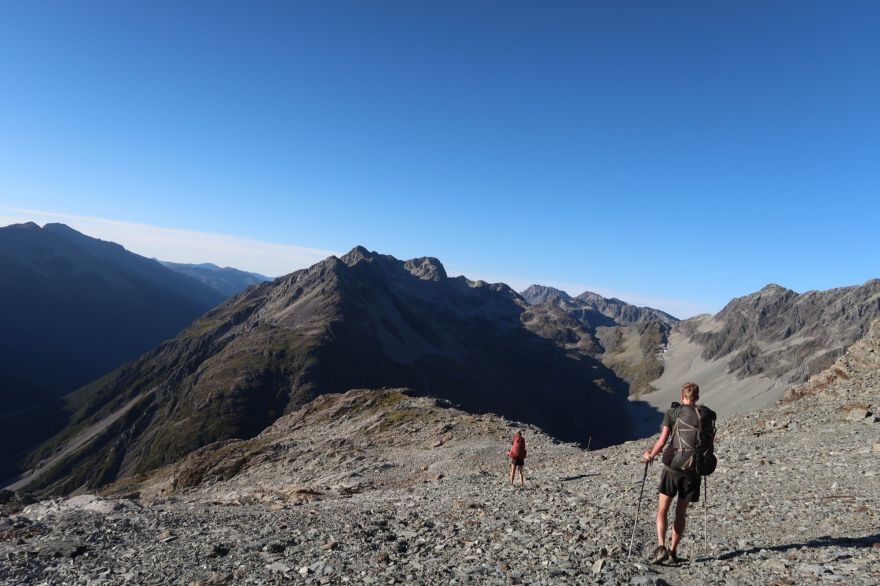 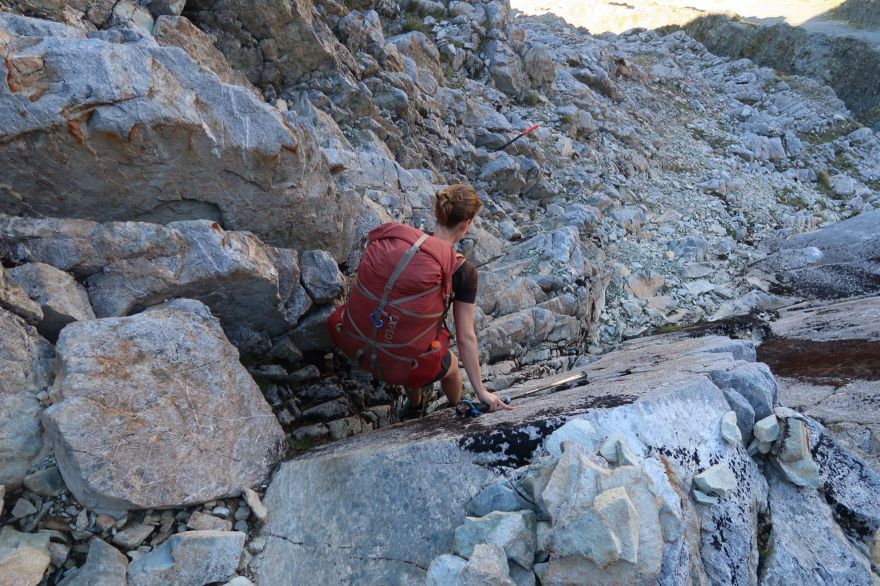 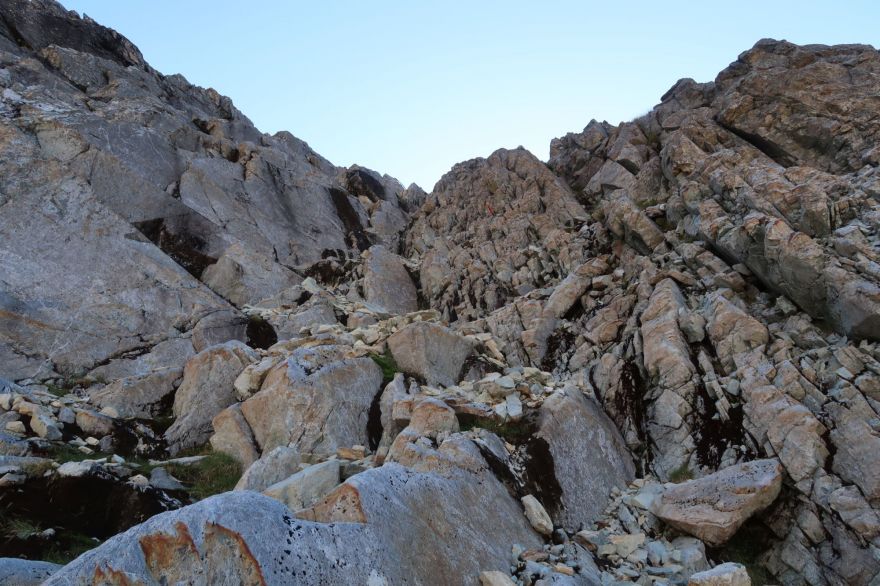 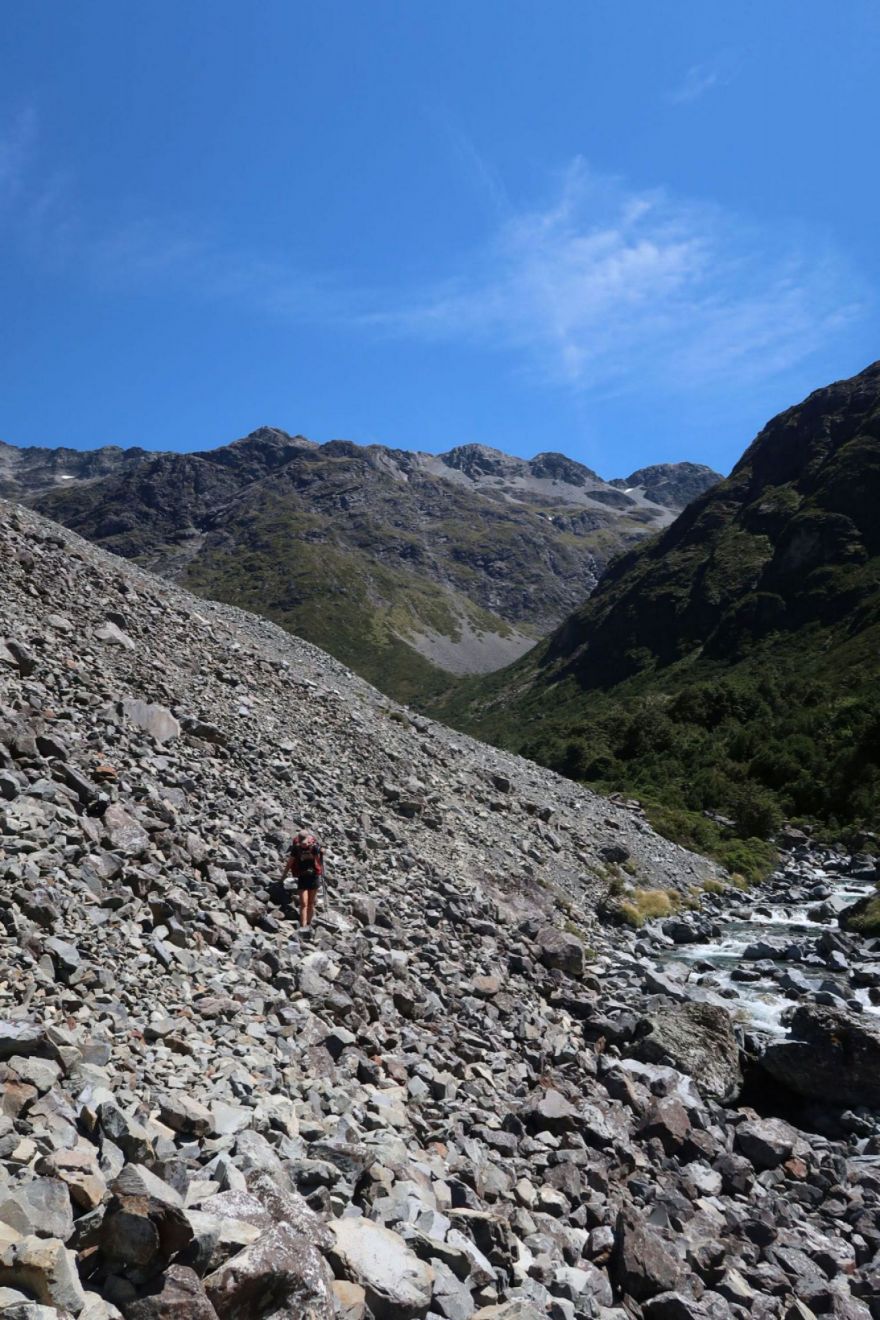 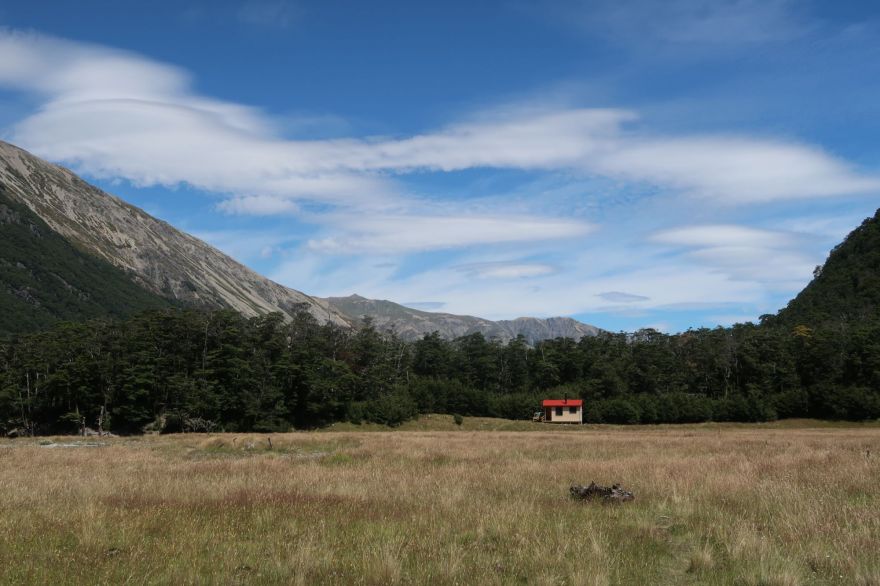 We continued our way through a widening valley. We followed a 4x4 track, which allowed us to make a lot of ground. We crossed a number of rivers. Some had a rather strong current, but nothing really serious. After crossing the Ada River, we turned right and entered the St. James Pathway. Nothing really changed, as we were still following a 4x4 track. Soon after crossing a suspension bridge, we arrived at Anne Hut (890 meter). 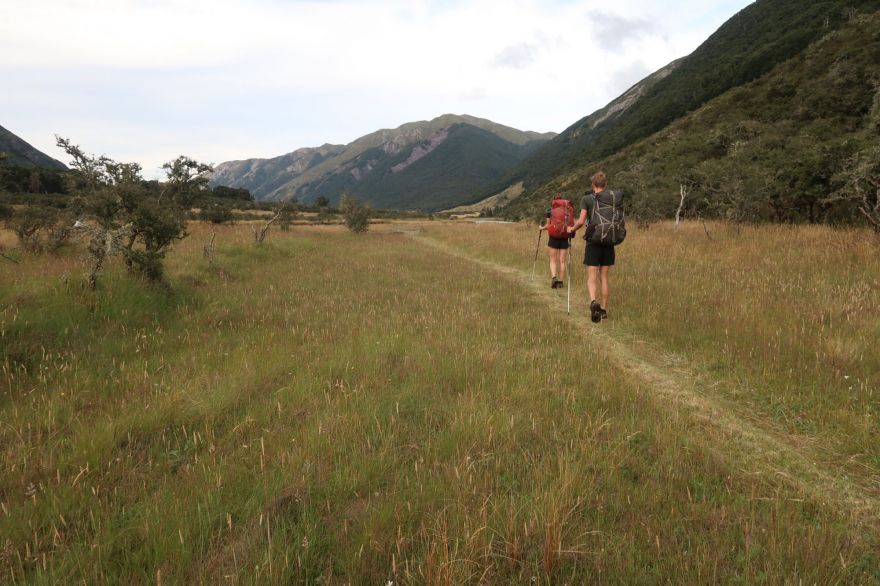 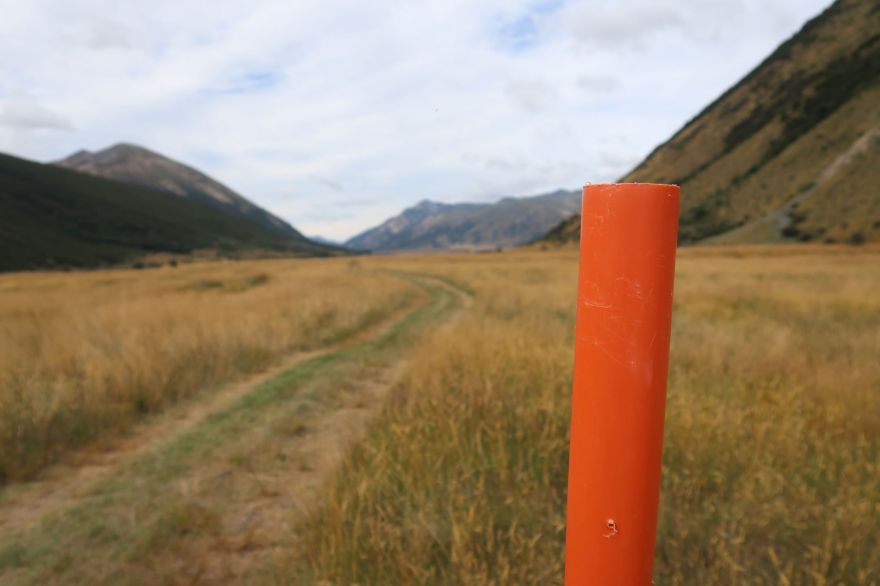 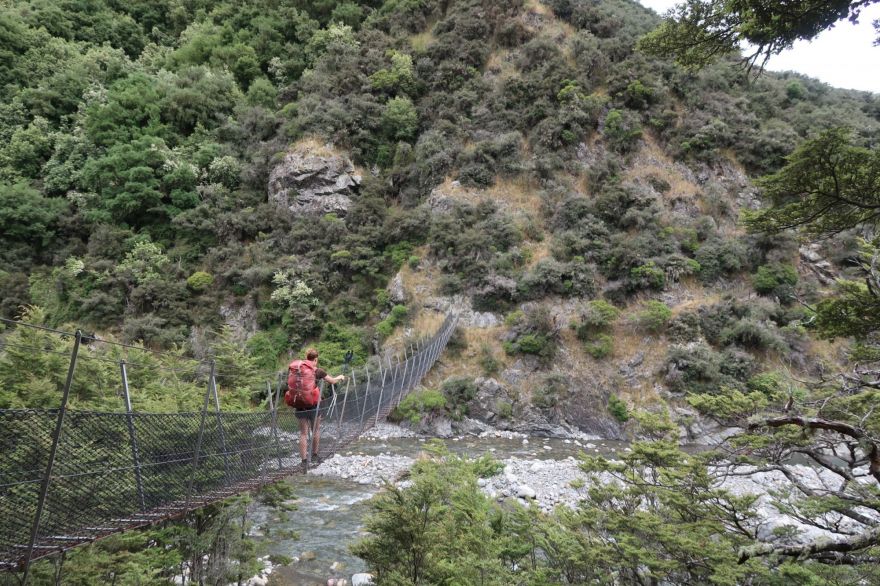 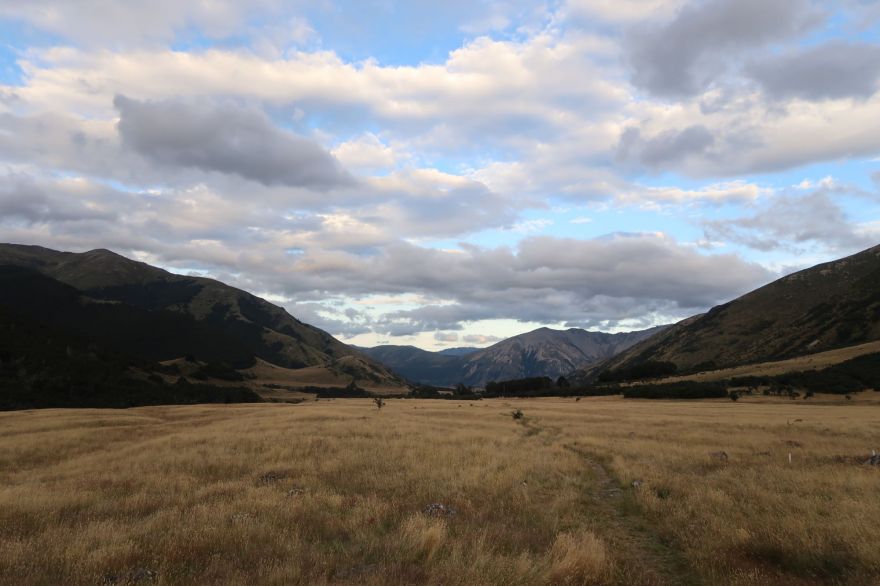 From Anne Hut, we continued our way to Anne Saddle (1.136 meter). We followed an open landscape. The track led us through high grass and muddy swamps. At some sections, a boardwalk was installed, allowing us to pass the worst mud rather easy. We followed Anne River upstream. Where the river was a few meters wide when we left Anne Hut, we basically followed the river to its spring. Soon after, we arrived at Anne Saddle.

The descend from Anne Saddle was nothing spectacular. We followed another river downstream through a beautiful valley. After about 5 hours of walking, we arrived at Boyle Flat Hut (805 meter). Because the sun was brutal again today, we decided to call it a day and rest in the shade of the hut. 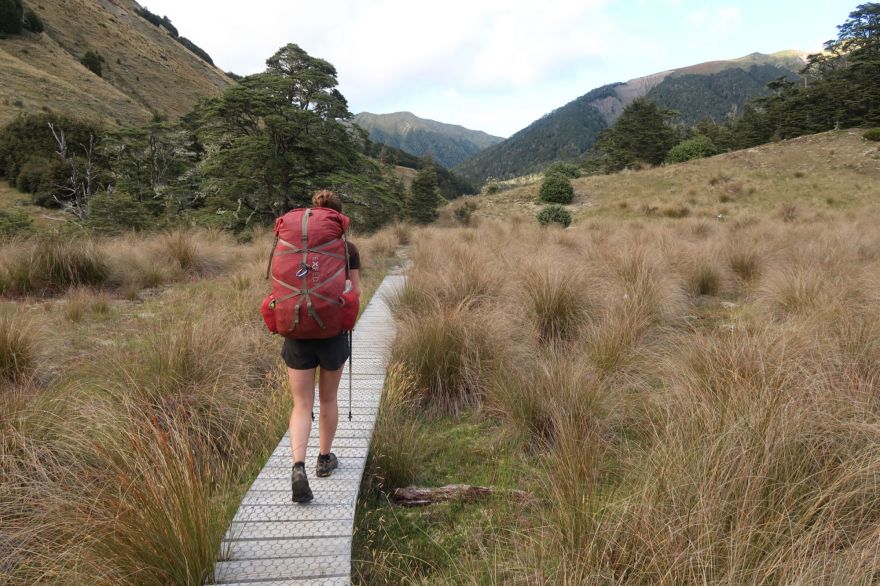 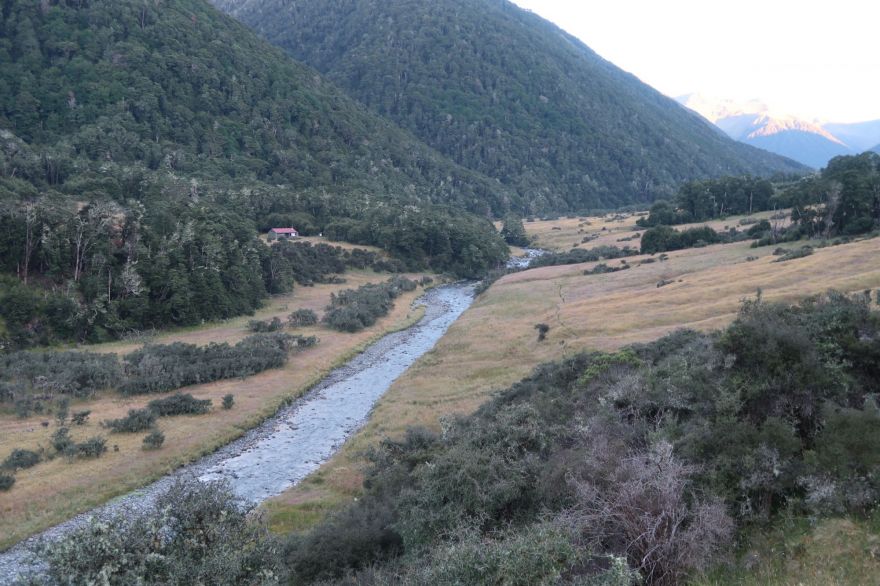 Wednesday, we continued our way to Boyle Village. A mere 13 kilometer along Boyle River. We followed the track through open grass land and dense forest. In Boyle Village, we stepped back into civilization. At the Boyle River Outdoor Education Centre, our food parcel had arrived, we were able to check our mail and recharged our electronics. Because it was way to warm to walk again, we decided to stay for the night at the Boyle River Outdoor Education Centre. 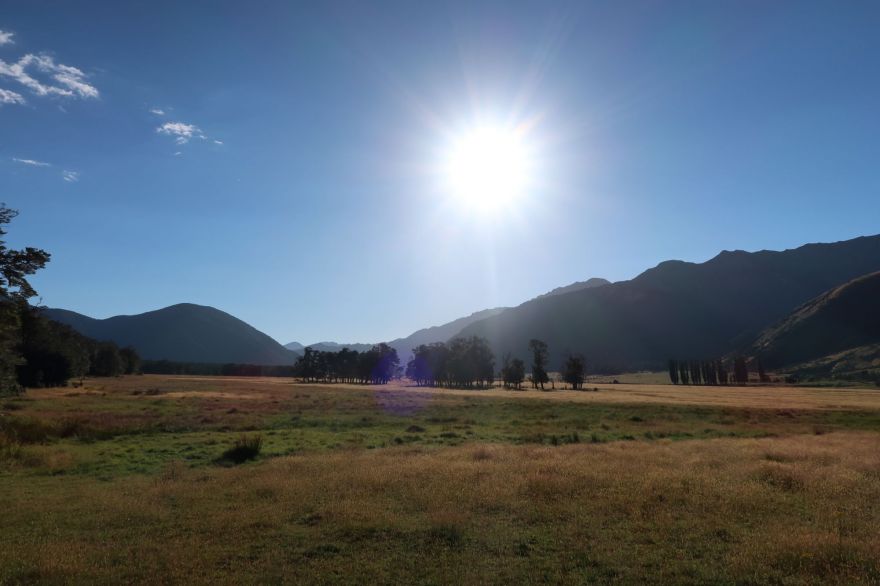